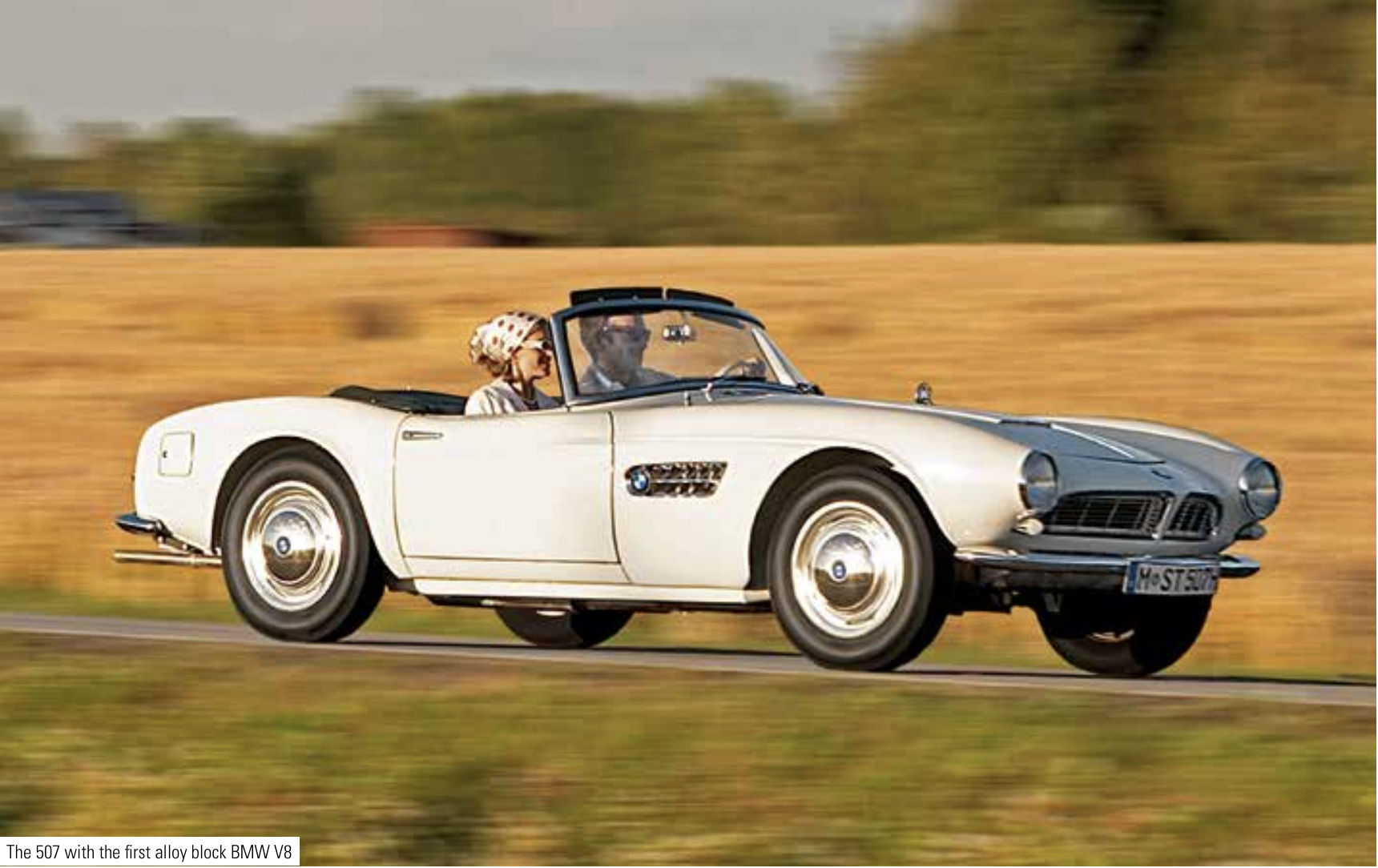 We take turbo-charging very much for granted nowadays. In fact the concept of using the energy which is otherwise wasted in the exhaust gases from an internal combustion engine, to pump more air into an engine, was first proposed in 1905. Exhaust gases drive a turbine which is connected to a separate compressor to draw in cold fresh air to increase the density of the charge in the cylinders and allow the introduction of more fuel. But every good idea has its time, and supporting technologies such as metallurgy and lubrication were simply not well enough advanced in the early 1900s to allow the design and manufacture of reliable ‘turbos’ to take hold.

However the need to develop ever more powerful internal combustion engines for aircraft was driven by the two World Wars. Military aircraft needed to fly higher and faster, and because normally aspirated engines lose power as the density of air reduces at altitude, ways to increase the density of the air fed into them were needed. Superchargers, which run at low speeds and involve lower temperatures, used technologies which at the time were reasonably well understood and developed, so initially they were the preferred choice. Turbocharging was only used for very large engines in ships and railway locomotives which could tolerate the extra weight of the heavy castings, which the turbos needed.

The French were the first to make some progress with smaller engines when Renault turbocharged engines for their fighters in the First World War, although they were not generally considered very reliable. The German manufacturers, including BMW, stuck to the use of superchargers. It was General Electric in the USA in 1918 that first reliably turbocharged a V12 Liberty engine, calling it a ‘turbosupercharger’, as the term ‘supercharger’ was applied to all forced induction devices at the time. By the start of the Second World War the Americans were using ‘turbochargers’ for aircraft such as the B-17 Flying Fortress, B-24 Liberator, P-38 Lightning and P-47 Thunderbolt. In the UK, Rolls Royce stuck to superchargers for their famous Merlin range of engines.

During WW2, BMW was a major aero engine supplier and by 1945 had produced around 50,000 mostly radial, air cooled and supercharged engines for the Luftwaffe. In 1944 they produced just one turbo engine, the 801 TJ, a 14 cylinder, double row radial, but it saw very little service. So post war, the understanding of pressurised induction and supercharging was well understood. The requirement for high octane fuels to go with the much higher cylinder pressures and the safety problems these caused was also known, and forced induction was not felt to be suitable for ordinary road vehicles. Instead BMW took up where it had left off in 1940, using the successful design of the straight six engines used for the pre-war 327 and 328. In 1952, noting the success of V8 engines in the USA, BMW decided to introduce its own V8 but with an aluminium cylinder block, the M502. It was a success, being far lighter than the cast iron block American equivalents, and with further development it was used in the beautiful 507.

But it was expensive and BMW found they had a range of cars which, financially, were bringing the company to its knees. This led to the famous Annual General Meeting of the company on 1 December 1960 when Herbert Quandt became the major shareholder and the company embarked on a recovery plan to replace its range of cars with ‘Neue Classe’ designs.

In 1963 the FIA announced the European Touring Car Championship series, which BMW entered with their well developed BMW 700 two-seater open sports car with a flat twin 697cc engine. But this was also the year in which BMW introduced the 1800 four door saloon. Encouraged by the Sales Director Paul Hahnemann to promote the new car, a year later, in April 1964, after further development and in ‘Ti’ guise with twin Solex carburettors, it started its racing career. It was an immediate success and winner of many major races over the next two years.

By 1967 the 4 door saloon was becoming too heavy and Porsche was able to homologate its two-seater, two-litre, 911 as a ‘Touring Car’ so that BMW did not enter the championship, concentrating instead on Formula 2 single seaters. This meant that all development work was focussed on the M05 (we know it now as the M10*), four cylinder engine with its capacity increased to two litres and fitted with Kugelfischer mechanical fuel injection which, in competition specification, was producing 200 bhp in the single seaters.

In January 1968 BMW introduced the lighter 2002 two door shell and once again, in the longer distance races the fuel economy of this fuel injected version of the engine enabled BMW to win Division 3 of the Drivers Championship. However Alex von Falkenhausen, who was in charge of engine development, felt that there was more to come than the reliable 207 bhp the engine was developing. Both the Porsche and supercharged Alfa Romeo cars had more power and were faster in a straight line than the 2002Tii. BMW had also noted the success that Drake Engineering, who built the four cylinder Offenhauser engine, were having with turbocharging in the USA and in December 1968 von Falkenhausen, much to the surprise of his staff, proposed turbocharging the Tii engine.

The trouble was that there were no custom turbocharger manufacturers, so von Falkenhausen turned to Kuhnle, Kopp & Kausch (KKK), a turbo manufacturer, for one of their standard designs. 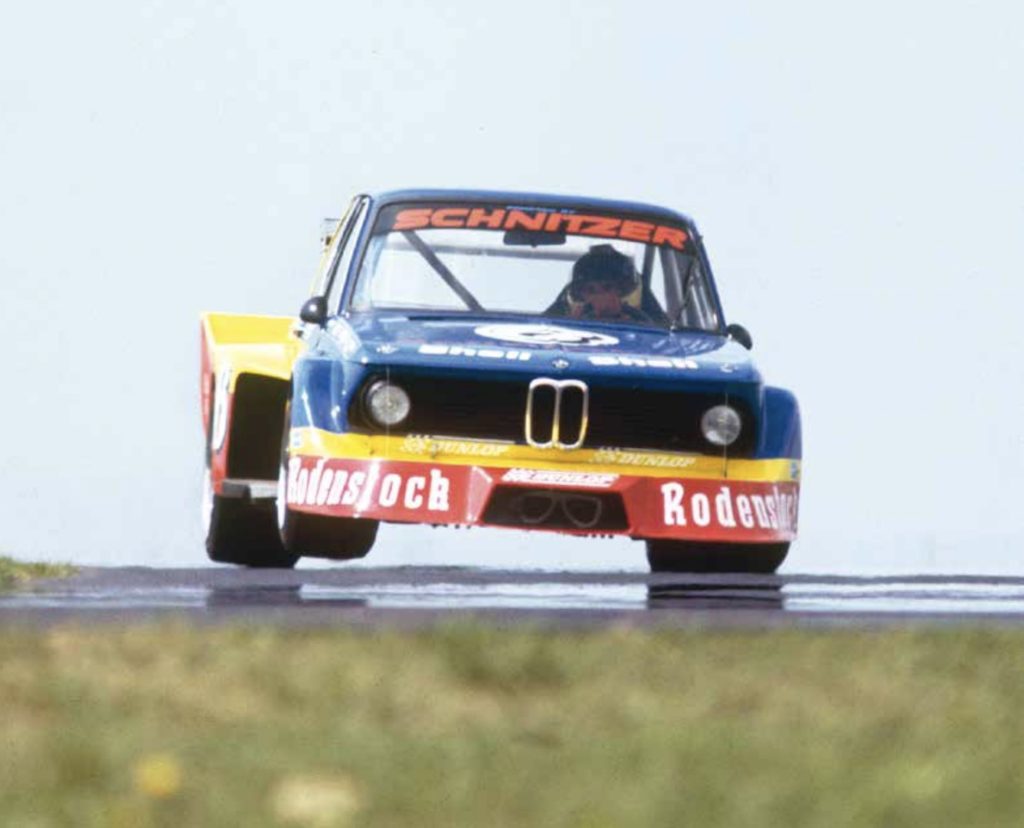 There then followed an intensive period of ‘seat of the pants’ development. The design of the exhaust manifold to the turbo was critical and a balance between boost pressure, drivability and reliability had to be established. The BMW engine had a cylinder head gasket (the Offenhauser engine was of monoblock construction where the head was an integral part of the block) so the BMW had to run at less boost pressure and compression ratio than Drake were using and the Kugelfischer fuel injection pump had to be redesigned.

In the end an engine producing 275 bhp at 6,500 rpm at a boost of about 1.0 bar (this was varied for different circuits) was chosen, and the first outing of the 2002TiK (K for ‘Kompressor’) took place at Snetterton on Good Friday 1969. Despite all the testing the engine failed due to induction sealing problems. So in season development continued and the ‘K’ engine became more reliable to give Dieter Quester the European Group 5 Special Touring Car championship title. 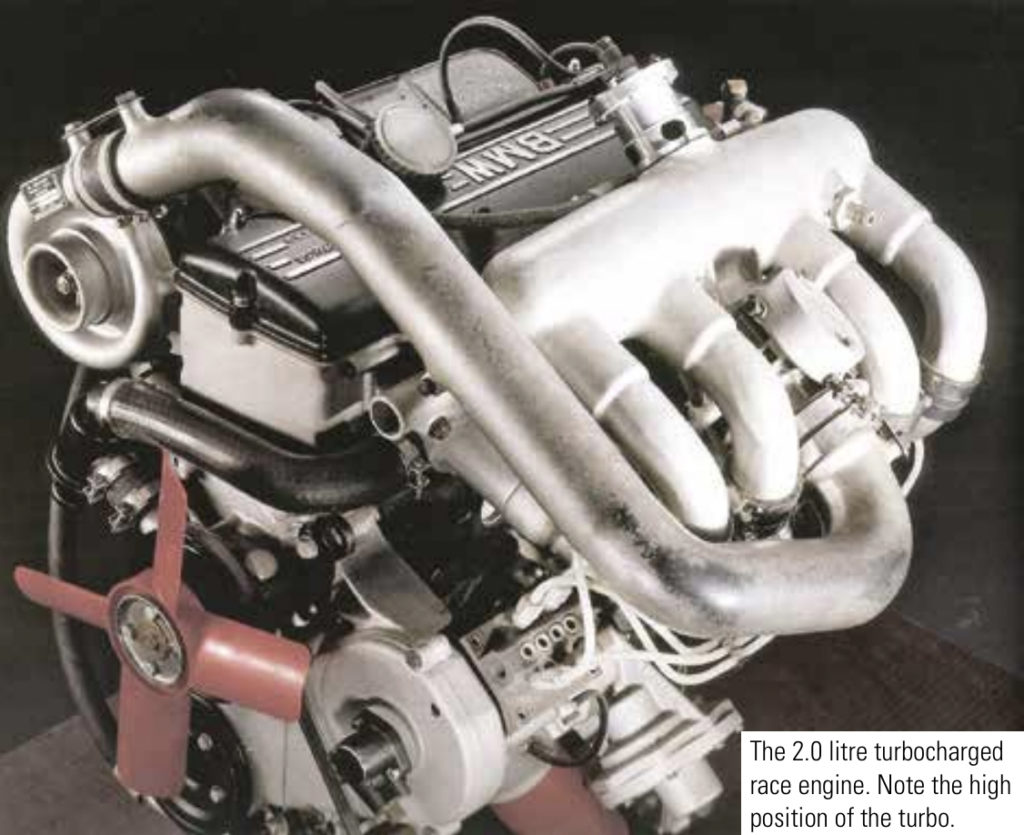 The Directors of course wanted a return for the investment which had been made in the competition department. There was considerable public interest in this first European turbocharged car and under the direction of the new Sales Director, Bob Lutz, an American, the production department was authorised to launch the 2002 Turbo in January 1974. The boost was reduced to 0.7 bar, and the turbo was moved to fit alongside the cylinder block and the power reduced to 170 bhp at 5,800 rpm.

Sadly the timing for the launch was wrong. The first post war ‘world oil crisis’ was building and the provocative front spoiler on the 2002 with ‘Turbo’ written in reverse type so as to appear the right way around in the rear view mirror of the car in front, was too provocative for many of the potential customers. The car was also difficult to drive because the power came in sharply between 2,000 and 4,000 rpm. This was fine for competition drivers who kept the revolutions in the 4,000 to 6,500 rpm range but un-useable for safe road use – particularly in wet conditions. Only 1672 left hand drive cars were built and production ended in June 1975. 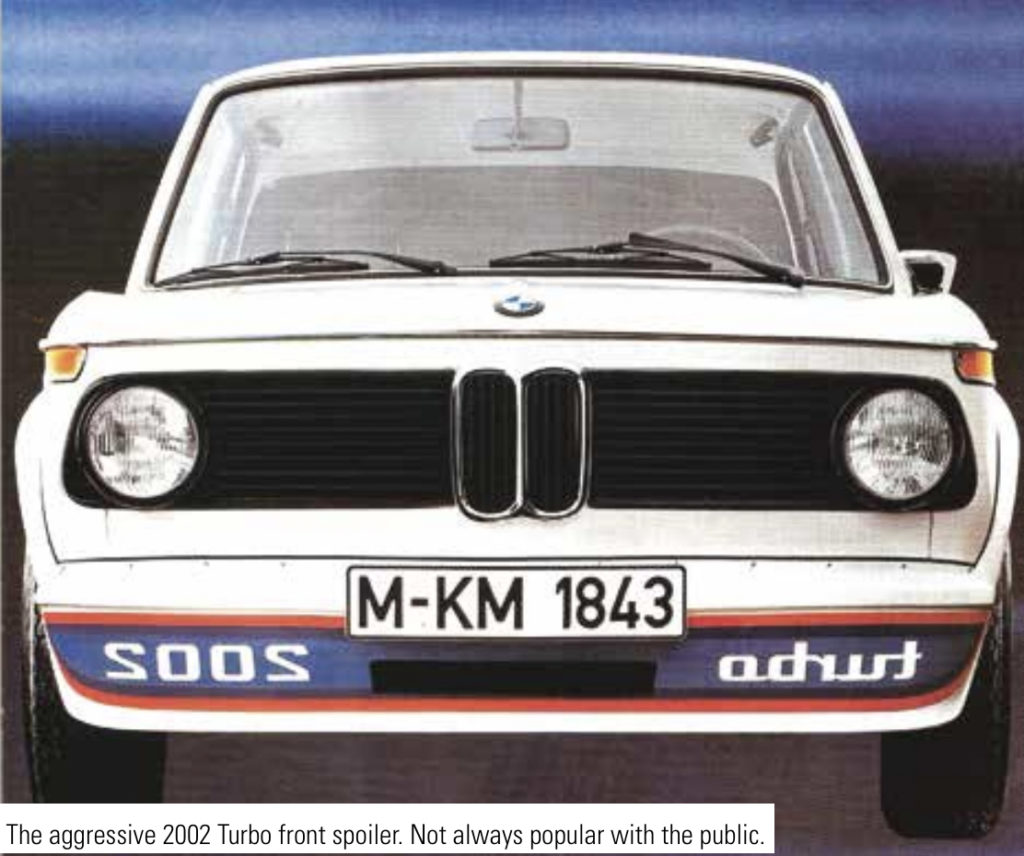 With the genie out of the bottle, the turbocharging was considered a practical competition engine application. By then the twolitre M10* single overhead camshaft competition engine had evolved into a twin camshaft, four valve per cylinder engine, the M12* producing 242 bhp from 1.6 litres, and this engine, further reduced to 1.4 litres and turbo-charged for entry in the 2.0 litre class, led to the famous 320i cars of the BMW Junior Racing Team, and in 1981 to the famous 1.5 litre M12/13* Formula 1 engines. This is the story for Part 2.