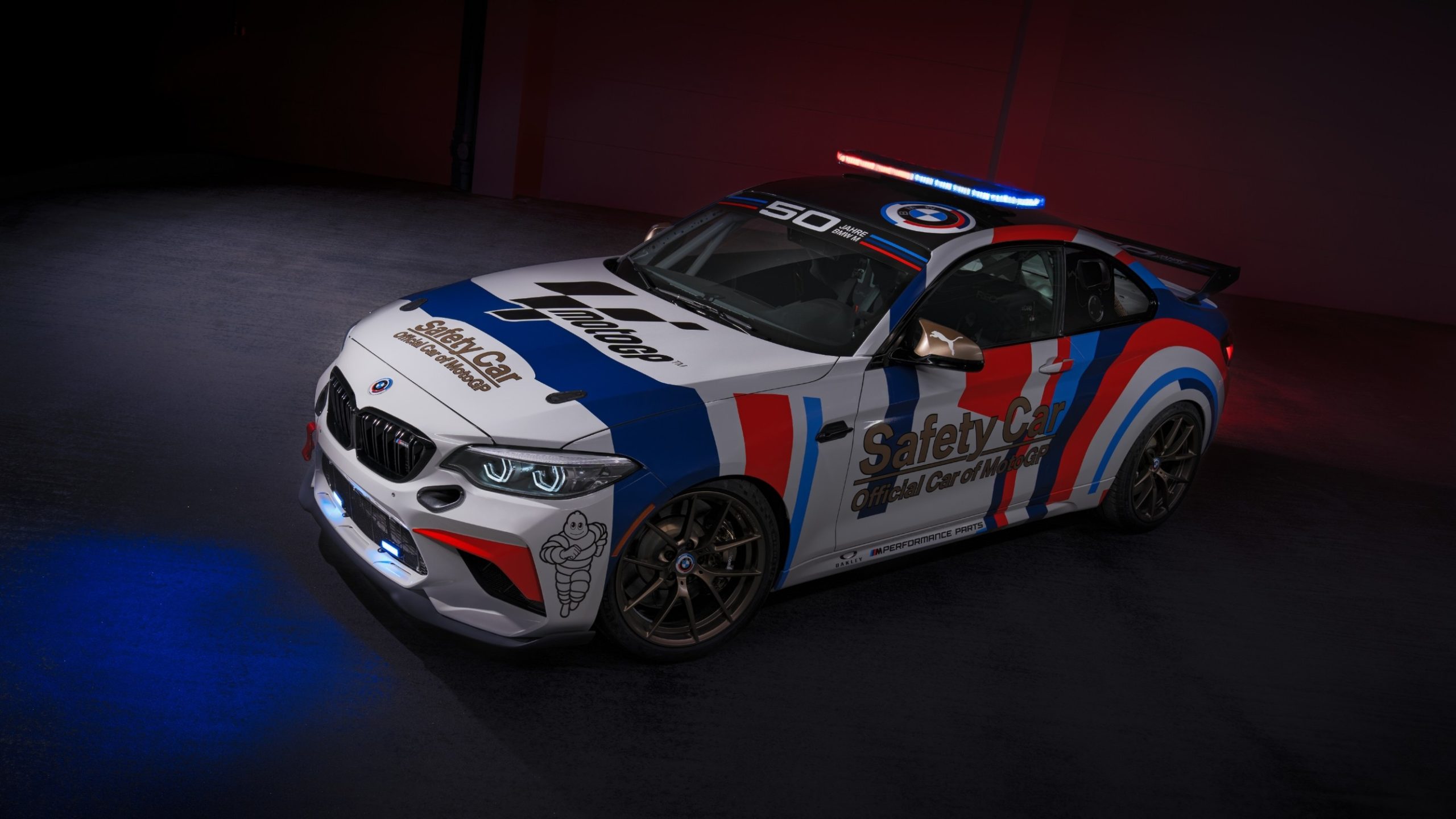 50 years of BMW M. In 2022, the commitment as Official Car of MotoGP™ is all about BMW M GmbH’s special anniversary. The first highlight is a first in the BMW M safety car fleet. The BMW M2 CS Racing is the first thoroughbred race car to be used as the lead car in MotoGP™. The BMW M2 CS Racing MotoGP™ Safety Car heads the fleet of powerful BMW M safety cars in the 2022 season, which begins on 6th March with the Grand Prix of Qatar. “M stands for Motorsport – something we are underlining with the new BMW M2 CS Racing MotoGP™ Safety Car,” said Franciscus van Meel, CEO of BMW M GmbH. “BMW M GmbH combines high-performance production automobiles and motorsport under one roof. It is for this reason that we selected a race car from our BMW M Motorsport range to be the new MotoGP™ Safety Car – an appropriate choice to mark the 50th anniversary. The BMW M2 CS Racing has been successful in a wide range of championships – and, as a thoroughbred race car, is perfectly suited to leading the field as the safety car in the pinnacle of motorcycle racing. We are looking forward to our 24th season as ‘Official Car of MotoGP™’ and to seeing the BMW M2 CS Racing in action as a safety car for the first time in Qatar.”

“BMW M has been our partner since 1999 and, over the course of this long-term collaboration, has always thrilled us with new highlights,” added Carmelo Ezpeleta, CEO of MotoGP™ rights holder Dorna Sports. “With a safety car based on a real race car, BMW M is once again setting new benchmarks this year. The BMW M2 CS Racing MotoGP™ Safety Car shows how deeply rooted BMW M is in motorsport. It is also more proof of just how intensively BMW M GmbH brings its passion for motorsport to play in our partnership. We would like to congratulate BMW M on its 50th anniversary and are looking forward to an exciting new season together.” The BMW M2 CS Racing is part of BMW M Motorsport’s extensive range of race cars. It is successful in championships around the world, and there are also multiple international and national one-make cups featuring the BMW M2 CS Racing. BMW M Motorsport drivers and teams also score points towards the BMW Sports Trophy on their outings with the BMW M2 CS Racing. The competition is the only one of its kind in the world for drivers and teams who compete with BMW M race cars in various series and at renowned racing events. The most successful of them are rewarded with an attractive amount of prize money.

As well as an engine generating up to 450 hp (depending on the version), the race car also has motorsport-specific driving aids like ABS and DSC, a mechanical limited-slip differential with pre-load and separate cooling, as well as specially manufactured drive shafts and a carbon roof. For its role as the MotoGP™ Safety Car, the BMW M2 CS Racing only required modifications in a few areas, including the addition of light bars and front lights. The livery of the new BMW M2 CS Racing MotoGP™ Safety Cars is a reference to the 50th anniversary and based on the anniversary logo of BMW M GmbH. For more information about BMW M GmbH and the involvement as the ‘Official Car of MotoGP™’, see: www.bmw-m.com