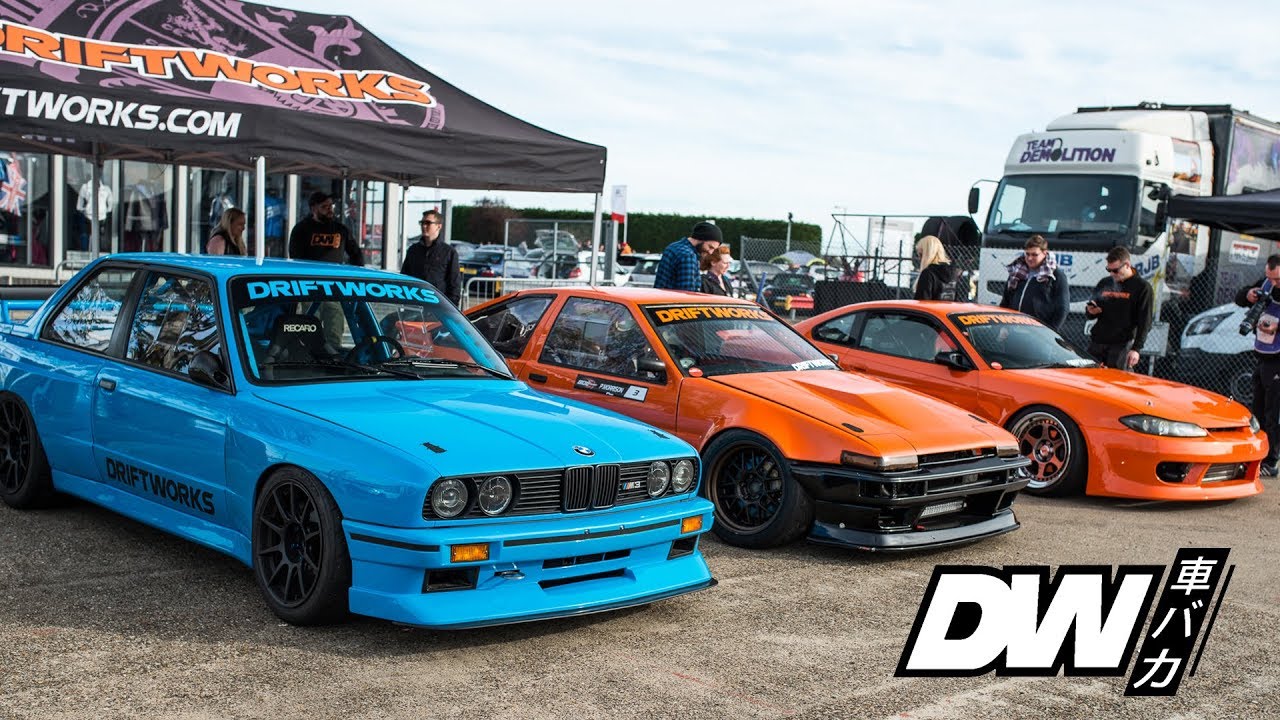 If I landed on the earth today from the planet Zog, how would you describe what is Driftworks? A Brand, a business, hobby, YouTube channel, blend of all?

It’s a question we’ve struggled with since the very beginning in 2004. Face to face when asked ‘what is Driftworks?’ it’s usually easier to just reply ‘we’re a mail-order business’ as it is at the core of it all. The brand, the race team, the car builds, the channels, the events we’ve put on and the films made are all as a result of the mail order parts business.

How did the company/vision/brand whatever it’s been called, start?

In 2004 myself and my business partner James Robinson quit work and started the mail-order company and brand from a spare room in my house.

When did you start to see the business value of using YouTube as a marketing tool?

I’m not sure I ever have seen it that way. For many years YouTube was just a place to upload a video that we wanted to embed on the Driftworks forum or blog. Even recently where I’ve dedicated so much of my time to the vlogs I’d question the tangible value it has to us given the time I spend doing it.

Were you inspired by other Channels, such as MCM and Car Throttle?

No, up until about a year ago I never really watched YouTube. I’d watch specific videos of course, but I’d never properly subscribed to anyone. I do now watch quite a fair bit, and I guess the closest that any channel would come to being an inspiration is Casey Niestat, as his editing the effort he put into daily vlogging always blew me away.

What is the main focus of the business as it sits today?

The business at its core remains the same. An aftermarket mail-order car parts company specializing in wheels and suspension.

Who is responsible for your editing?

I edit 99% of all the recent videos. I think the first one I did was the ‘Making Lamborghini ITBs’ on the 29th of May 2019. Before that I’d edited simple videos, but most of the vlog YT stuff was driven by Starkey and often edited by Al (who is a professional filmmaker and responsible for filming and editing Outsiders Japan, our feature length documentary)

How long does it take to edit one episode?

Some of the early edits took me over 20 hours. I’m quicker now as I know how to make my life a bit easier with filming. It can still be very time consuming though. I usually factor about 20-30 hours work a week now for 3 episodes.

How have you found the swing of marketing from traditional methods such as website, magazines, and shows to now reaching global markets with social media, the internet, and of course YouTube?

We’ve never done traditional advertising in magazines or the like. We used to rely a lot on my success in competition and our own forum, which before the advent of Facebook was one of the biggest drifting communities in the world. Now 90% of our business is nothing to do with drifting and we have to play the same game as a lot of other companies with social media advertising.

How do you deal with situations where you are just wanting to get on with something, but you have to constantly capture content for the ensuing video?

Up until recently, I just wouldn’t film. I’d get on with the job. This is why people are often surprised that a company director still does so much work on cars himself. I would often think ‘I should film this’ then think ‘nah, it’s too embarrassing pointing a camera at yourself’. I’ve just about got over the embarrassment hump now, but I will still find myself doing jobs that I know people would love to see, without the camera rolling as it makes the job take three times as long.

How do you cope with responding to all the comments?

I like reading the feedback and I figure if someone’s gone to the effort of paying us a compliment, I should attempt to acknowledge it somehow.

How do you deal with the negative comments and “know it all’s”?

I think we’re incredibly lucky with our audience. We do get haters, but the vast majority are incredibly positive. I do struggle sometimes with people that know everything but haven’t actually watched the video before commenting.

At the moment I’m just doing it while I can. The regular videos are an experiment to see if it is worthwhile. Currently, with the amount of effort I put into it, it’s not really worthwhile. I do enjoy it, but we would have to see a significant increase in views and subscribers for me to consider the experiment a success and continue with this frequency long term.

Have you reached the point that you need to have production meetings to decide on what happens in the next episode?

No, I manage it all. I just occasionally have to ask Starkey to go and film Craig and the Aston.

Where do you see Driftworks in 2-5 years?

We’ve been trying to build the business to a point where we can upgrade to a newer nicer building. We own both buildings we work out of, but we’d like something a little newer and more presentable.

Before Driftworks I worked at a rough inner-city sixth form college in a mix of roles between technician, facilities and security.

What was your first car?

My first two cars were Minis.

What is the Favorite car in your fleet? And Why?

As they sit right now, the 964 turbo is my favourite as it’s wild, but still a road car & is currently ‘mostly’ working. Once the GT1 Lamborghini is done, there’s a good chance it’s going to take back top spot.

If you had to have one car for all purposes, what would it be and why?

One car for all purpose: 3 years ago it was my 991 GT3. It did everything from commute, to track day to shopping. Now I have a big dog my RS6 (with tow bar) is more all-purpose, it is pretty boring though, even with 680hp.

Where do you stand on electric vehicles?

James, my business partner has had all 3 Tesla’s. He currently has the quick Model 3 and Ed our CTO also has a model 3. So Driftwork’s has on-site charging. I borrowed James’ Model 3 for a few days as a daily. I very quickly got past the hilarity of nailing it off at every single set of lights, and went back to missing the drama of a proper internal combustion engine. The only way I see myself enjoying electric is hybrid enhancement. A P1 is one of my top tier dream cars.

Have you considered an electric powertrain conversion?

I wouldn’t be interested in a standalone electric power conversion into anything.

When did you first get the idea of shoehorning a V10 into a 3 Series BMW?

I just can’t sit still with most of my cars. I’d built the car originally with Schrick cams and a carbon airbox. It was awesome. I just wanted to do the next thing. I’d heard the M5, loved the sound and power and was invested in the idea before I’d done any real research into whether it was possible.

What turn of events lead to this idea?

I already own the M3. Back then I had one road car, one drift car.

What lead you to sell the car the first time around?

I sold it for the same reason I started the project. I can’t sit still. I’d decided I needed to own a Porsche GT3.

How did you find out it was for sale?

It wasn’t ever for sale. It was an extremely complicated reacquisition that took over a year and came with extra complications (I had to buy another completely disassembled car as a package to make the deal happen, and I had to get them both back from Germany in the middle of winter).

Do you ever set aside budgets for your projects?

I don’t. I should, but then I know I wouldn’t stick to the budget once I start getting carried away, so there’s no point.

Is there to be another project after the M3 is finished?

Of my ten-odd cars, five are current ongoing active projects including the V10 M3, so I hope there won’t be anymore. At least until I have a handle on this lot.

What’s the plan for it once completed?