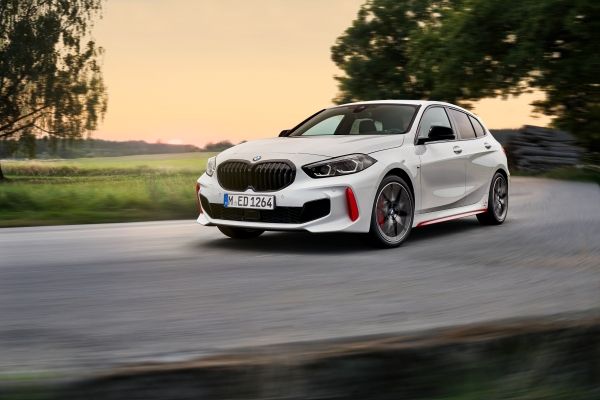 After an absence of more than 20 years, BMW’s legendary ‘ti’ model designation returns with the BMW 128ti. Designed to deliver exceptional driving enjoyment, with M Sport specification as standard, the new BMW 128ti is an authentic ‘Turismo Internazionale’.

With an advanced drivetrain that includes the anti-roll bars and brakes of the flagship BMW M135i xDrive, it also features a sporty exterior and driver-focused interior that boasts exclusive details to distinguish it from other BMW 1 Series variants. It is also circa 80kg lighter than the BMW M135i xDrive.

The new BMW 128ti is based on the M Sport model specification available for the BMW 1 Series, which includes distinctive front and rear aprons.

The BMW 128ti adds specific additional trim, such as the outer air intakes carried over from the front apron of the flagship BMW M135i xDrive and the trim for the Air Curtains, in red. The side sills containing the ‘ti’ badge are also red on cars finished in Storm Bay metallic, Mineral Grey metallic, Sapphire Black metallic or Alpine White paintwork. If the BMW 128ti is ordered in Melbourne Red metallic or Misano Blue metallic, the accents and “ti” badge on the sill (which can all be deleted, if desired) come in black and the sill reverts to body colour.

The BMW 128ti has extended Shadowline trim with a black BMW kidney grille and dual 90mm diameter black chrome tailpipe finishers as standard. An even darker front-end appearance can be achieved with the optional BMW Individual lights Shadowline, which are largely devoid of chrome. The window surrounds feature BMW Individual High-gloss Black Shadowline trim and the ‘128ti’ badge on the tailgate is in chrome. The 18-inch Y‑spoke 553 M bi-colour light-alloy wheels are exclusive to the BMW 128ti.

The interior of the BMW 128ti features high-class materials, with red accents throughout creating a bold contrast to the black headlining. A large ‘Race Red’ surface adorns the front centre sections of the standard Sensatec/cloth sport seats. A red ‘ti’ is stitched into the centre armrest which – like the door armrests, the door panels, the instrument panel and floor mat edging – also features red contrast stitching. The steering wheel rim and airbag cover of the standard M Sport steering wheel also feature red stitching. Standard equipment also includes the M door sill strips on the front door openings, and M seat belts. Boston backlit trim strips are standard whilst the Berlin trim is available as an alternative.

The M Sport seats are optionally available in perforated Dakota leather – in Black or in Magma Red with grey accents. If the latter is chosen, the contrast stitching and ‘ti’ badge are in grey and the floor mats have stitching in the BMW M colours.

The infotainment features of BMW Operating System 7.0 are accessed via a display screen of up to 10.25 inches with the optional BMW Live Cockpit Professional. Gesture control is also available and a 9.2‑inch BMW Head-Up Display can be specified as options. The load compartment has a capacity of 380 litres, rising to 1,200 litres with the rear seat folded. Electric tailgate operation is also optionally available. Folding Mirrors, Heated Seats and cabin Ambient Lighting are also included as standard.

The new BMW 128ti is available exclusively with specially tuned, bespoke M Sport suspension. It has the firmer anti-roll bars and anti-roll bar mounts from the range‑topping BMW M135i xDrive, plus stiffer modified springs and shock absorbers – it’s also10mm lower. This, combined with a model-specific steering setup that has been designed to further minimise torque steer, results is even sharper driving dynamics. A weight saving of around 80kg over the all-wheel-drive BMW M135i xDrive contributes to the sporting performance of the BMW 128ti.

If the inside wheel loses grip while powering through a bend and the driver accelerates at the same time, the limited-slip differential directs more torque to the wheel with greater grip, thereby preventing wheel slip and enhancing traction and agility.

The mechanical limited-slip differential is assisted by several electronic control systems. One system that has been specially modified for the BMW 128ti is BMW Performance Control, whose ‘sharper’ yaw moment distribution boosts rear axle agility. ARB (near-actuator wheel slip limitation) technology is also utilised, as it is on all models in the BMW 1 Series range. This newly developed traction control system, that made its combustion-engine debut on the 1 Series, features a slip controller positioned directly in the engine control unit rather than in the control unit for the DSC (Dynamic Stability Control) system, enabling ARB to work ten times faster. As a result, not only is operation smoother and more sensitive, the system can also make maximum use of the potential traction offered by different road surfaces. The ARB technology works with DSC to significantly reduce the power understeer that can affect front-wheel-drive cars.

Standard M Sport brakes and sport tyres As in the BMW M135i xDrive, the BMW 128ti is fitted with M Sport brakes, which provide increased fade resistance and exceptional feel. The front callipers bear the M logo and are painted red (a first for a BMW 1 Series model). The front brakes consist of aluminium four‑piston monoblock fixed callipers and 360mm x 30mm inner-vented discs, while floating callipers with inner-vented brake discs measuring 300mm x 20mm are at the rear.

The 18-inch Y-spoke 553 M bi-colour light-alloy wheels exclusively fitted on the BMW 128ti can be specified with sport tyres (Michelin Pilot Sport 4) in 225/40 R18 format as a no-cost option.

The engine in the BMW 128ti is a direct offshoot of the BMW Group’s most powerful four-cylinder unit. The 2.0-litre engine was modified with BMW TwinPower Turbo technology and produces 265hp from 4,750-6,500rpm. Peak torque of 400Nm is available from 1,750-4,500rpm. The BMW 128ti can sprint from 0-62mph in 6.1 seconds and reach a limited top speed of 155mph. Despite this strong performance, the 128ti returns combined fuel consumption of 44.1 – 46.3mpg* and emits only 148-139g/km of CO2*. This enables it to meet the Euro 6d exhaust standard. The standard Active Sound Design (ASD) ensures the driver can enjoy a distinctive engine sound in the cabin without any increase in external noise.

Like the range-topping BMW M135i xDrive, the BMW 128ti is fitted as standard with the eight-speed Steptronic Sport transmission. Fast automatic gear changes ensure the highest possible gear is always engaged. Shift paddles on the steering wheel also allow the driver to change gear manually at any point.

Customers can personalise the new BMW 128ti with accessories from the exclusive M Performance Parts range, which has been developed with the expertise of BMW M GmbH .

Various lightweight parts in new carbon-fibre look and High-gloss Black components further enhance the sporting appearance of the BMW 128ti.  The M Performance front splitter, the rear diffuser and the roof-edge spoiler with air through-flow and the aero flics in High-gloss Black optimise aerodynamics. These M Performance Parts have been developed specifically for the BMW 1 Series and adapted in the wind tunnel to work together perfectly. The hand-made, high-quality carbon-fibre components that  also include M Performance exterior mirror caps are sealed with clear coat and given a high-gloss polished finish. 18-inch forged wheel Y-Spoke 711 M in Ferric Grey and the 19-inch M Performance bi‑colour light-alloy wheel Double-spoke 555 M with polished finish are optionally available.