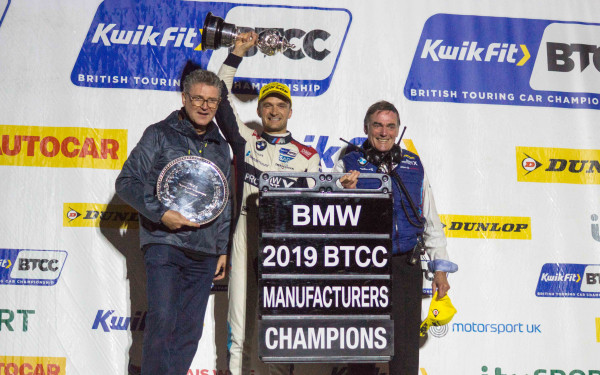 Colin Turkington will remain with Team BMW in the 2020 British Touring Car Championship.

Making the confirmation today (Monday 9th December), Team BMW and Turkington will embark on their fourth consecutive year together following the Manufacturers return to the series in 2017.

The four times champion has become one of BMW’s most successful drivers in history, claiming all four titles behind the wheel of the Munich marque.  He recorded his 51st BTCC win this year and so far has 141 career podiums, 20 pole positions and 56 fastest laps.  Mental strength and an unrivalled work ethic are standout characteristics of the Northern Irishman who continues to inspire with sensational performances year on year.

Colin brought the new BMW 3 Series to glory in October this year winning the Drivers’ Championship in one of the greatest BTCC season showdowns ever.  Team BMW were also victorious securing the Manufacturers’ title, retaining this championship for the third year in a row.  It was a fairytale first season for the new 3 Series in 2019, and with a consistent package around him in 2020, Turkington believes they can further improve performance.

“Going into 2020 with Team BMW will mark my 16th season in the BTCC and I couldn’t be happier!    Remaining with the team was never in doubt and we are excited to defend our titles together once more.

Becoming a four-time BTCC Champion was a very special moment, but I am motivated to keep striving for more. Racing with this team gives me the best chance to achieve further success, and I’m so thankful to both BMW and WSR for these golden opportunities.

The level of competition in this series keeps me inspired and I’m as hungry as ever to further develop the BMW 3 Series and push the limits of performance as far as we can. We had very little testing this season outside of the races so I’m looking forward to starting a thorough programme in the new year.

The consistency of the car and personnel is a great boost and further motivates me as we get to see what the potential of this car actually is.  There was a lot of ‘new’ to contend with in 2019 in terms of the car and my engineer, so familiarity of environment should only enhance things.

I’ve started my preparation for 2020 with a few other projects to get outside of the comfort zone and will be doing everything I can to raise the game for 2020.

A good long rest over the Christmas holidays is a must, but I can do that with ease knowing we delivered our goals in 2019 and have the best possible package ready to go for 2020.”

The 2020 BTCC season takes place over 10 race weekends and will begin at Donington Park on March 28th and 29th.  It will visit Silverstone twice for the first time this year before ending at Brands Hatch on October 11th.

A number of minor regulation changes will be implemented for next year’s Kwik Fit British Touring Car Championship. The key changes relate to tyre choices, success ballast and qualifying and are outlined as follows: TYRES Following the initiative’s successful introduction last summer, drivers will use all three Goodyear tyre compounds – hard, medium and soft – on race day at Snetterton. This will be replicated at Croft, which has been made possible following the circuit’s resurfacing earlier this year. There has also been a change to the way in which tyres are nominated, with teams no longer required to specify before qualifying, the race in which they will use their ‘Option’ tyre. Instead, they will be free to make their choice during the course of race day – thus providing the opportunity to modify their strategies. SUCCESS BALLAST Maximum success ballast will be increased to 60 kilograms, thereafter reducing in 6kg increments down to tenth place as follows: 1st: 60kg 2nd: 54kg 3rd: 48kg 4th: 42kg 5th: 36kg 6th: 30kg 7th: 24kg 8th: 18kg 9th: 12kg 10th: 6kg QUALIFYING A new qualifying format will be trialled at Snetterton. Replacing the usual 30-minute session, drivers will have a marginally reduced window of 25 minutes to record their lap times. The fastest ten competitors will then progress to a ten-minute pole position session to determine the top ten places on the grid.

“Clearly, the regulations for the BTCC work tremendously well. That’s self-evident from the fantastically close racing and championship battles, but we’re always looking at ways in which they can be improved, so whilst these are fairly minor tweaks, they will certainly add some interesting new elements to next season’s championship.”