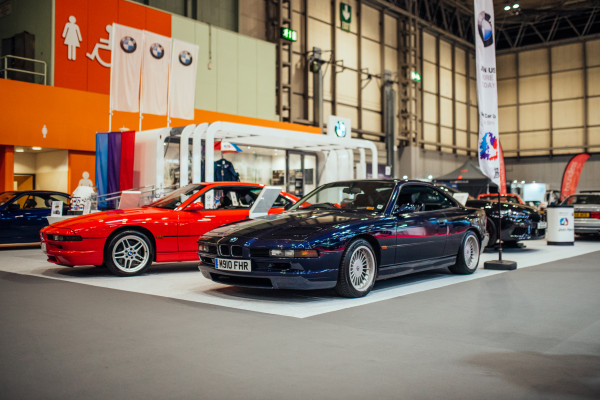 The weekend of 8th, 9th and 10th November saw the BMW Car Club GB once more in attendance in Hall 1 mixing in with the Premier Car Clubs in what seems to have become our regular pitch now for several years. Our theme for 2019 was “8” as we celebrated the 30th Anniversary of the E31 8 Series, and fast forward over the 30-year evolution to the latest incarnation with the F92 M8 Competition in Coupe form, kindly loaned by BMW UK.

Our display was enhanced with the presence of a hospitality unit set up and manned by The Event Store, thanks to Emma for her help in facilitating this and Russell for his OCD in setting up the unit and assisting us over the three event days. Just to dispel any rumours or misconceptions, the unit, stand and our presence at the show is entirely funded by BMW Car Club GB and not by BMW UK. Each of the display cars, kindly provided by Club members and the M8 arrived during the course of Thursday 7th to be cleaned and prepared for display. It never ceases to amaze me just how much time it takes to prepare the stand and the display, this year was just about 12 hours from start to finish with the final tweaks to the electricity supply being completed just 30 minutes before the show opened to the Press at 09:00 on Friday morning. Thanks go to Dave Evans and Peter Ayres for their help in setting up the stand and display, and of course to Michelle, Lisa and Anya for setting up and organization the Club merchandise and membership sign-up packs, and for their help on both Friday and Saturday in “wo-manning” the sales desk both days. 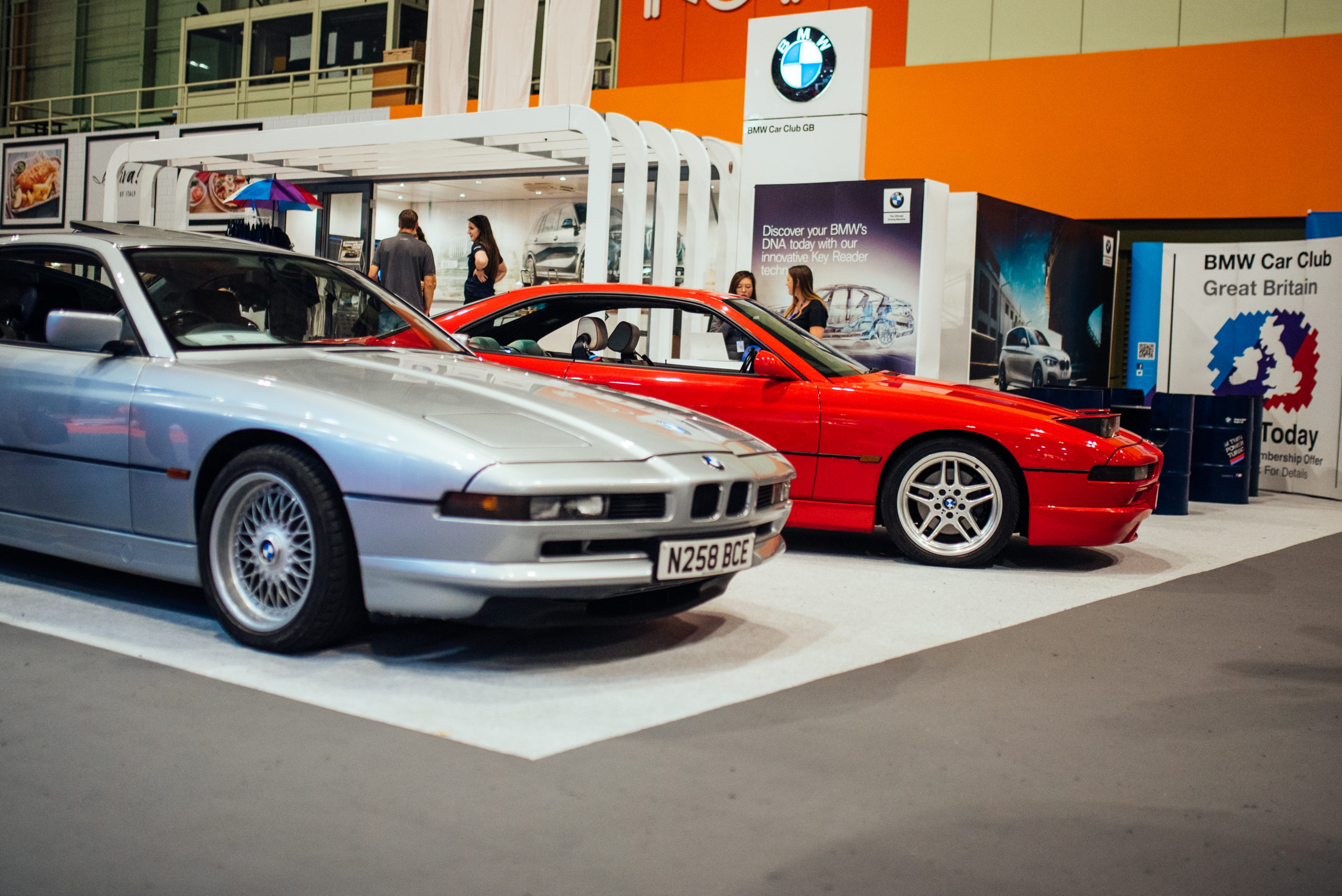 The manning of the stand over the three show days is always an important facet with much of the support coming from the band of Central West Region members always keen to help, supported also by Cotswold Region. This year our thanks go out to Brian Elliot, Peter Ayres, Mike Pope, Edward Hathaway, Dean Greenfield, Graham Brown, Lee Green, Dave Stacey, Dave Cooke, Jan Owen, Adrian Baker, Lewis Grainger, and with myself and Dave Evans providing representation from the Board. A great job done by you all so I do hope that you all enjoyed the show as much as I did.

We were never short of visitors, with Saturday being the busiest of the three days. There were times on Saturday when moving through the various halls was a serious challenge. Having the M8 on our stand was without doubt a magnet for attention, there were times when the crowds were four and five deep all around the car especially when it was started! Having the car on display with the E31’s stimulated a lot of interesting discussions once the theme was understood, and so a special thanks also must go to both Paul and Debbie Blythe for Debbie’s assistance in working to provide us with the five members cars and Paul for his depth of knowledge on the E31’s with answering all manner of questions that arose over the event. Thanks also to Shoaib Mahmood, Andrew Simcox, Colin Spearpoint, Graham Barrett and Debbie Blythe for providing their cars to make up the display.

BMW UK were also with us for the three days this year, providing key reader facilities for any visitors on the stand, with a readable key in order to enable owners to see and understand the data and particulars of their cars that are viewed by their chosen dealership when the car goes in for any aftersales visit. The provision of this service by BMW was independent of any franchise ties, rather than using the local dealership bias towards their own business. It gave BMW the opportunity to witness the stand activity and to provide much wanted feedback to Senior Management at Summit One, Farnborough on the success of the show, and the sense of partnership between BMW Car Club GB and BMW UK that can help to maintain the relationship and collaboration where it is mutually beneficial. 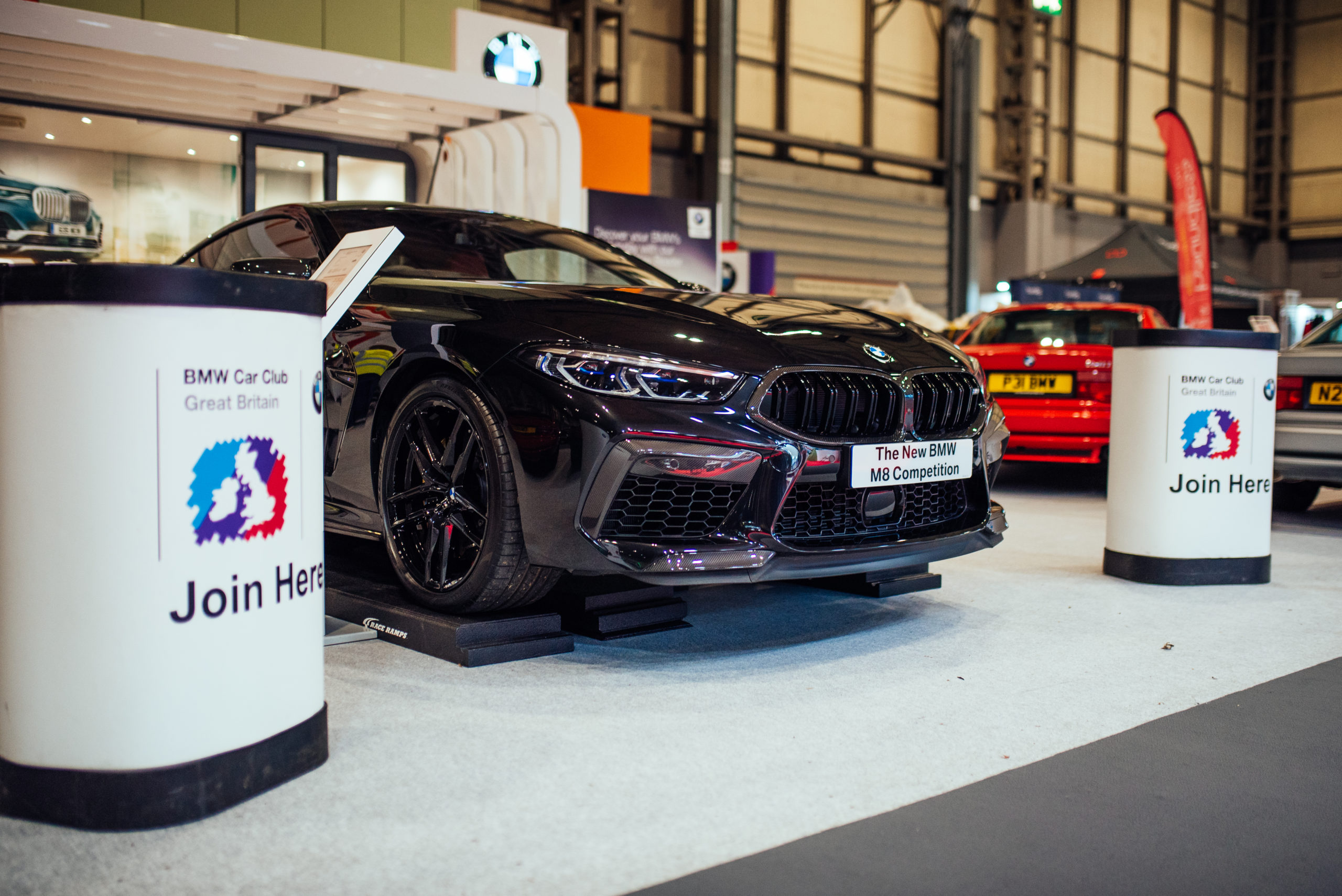 It was also great to see and share with Dan Wood his experience of having his Concours Winning E39 540i AC Schnitzer on the Meguiar’s Club Showcase Stand. Well done Dan for being there and even though you didn’t win, you will always be our winner, and a much deserved box checked off on your bucket list!

The Classic Car Show at the NEC is for me one of the highlights of the year, and while it is an extremely hard few days, I am already looking forward to planning 2020 even though the theme is not yet planned. Make sure that you mark your calendars for 6th, 7th and 8th November 2020!

“It was back in February that I answered the call for volunteers to show their E31s at the NEC show in November. I was nervous – I’d never shown a car at a prestigious event nor ever been to the NEC. I was very conscious that my car was not a ‘concours cruiser’, just a very normal 1992 850i which normally lives outside and which I’ve had for a shade over two years. But just like an expectant first-time father, nine months later I wondered what the fuss had been about. Yes, of course there had been some hard work (and expense) in making the car ready for the show but that was more than compensated by the genuine warmth and interest shown by enthusiastic and universally appreciative members of the public. Add to that the chance to talk to other 8 Series owners for a whole weekend and the fact that the BMW Car Club provided quite possibly the best seating area of any of the show stands made for a rewarding and memorable weekend. Would I go again? Maybe, I’ve yet to recover my legs from walking around a tremendously packed Exhibition – but ask me again when the 8 Series celebrates 50 years!” 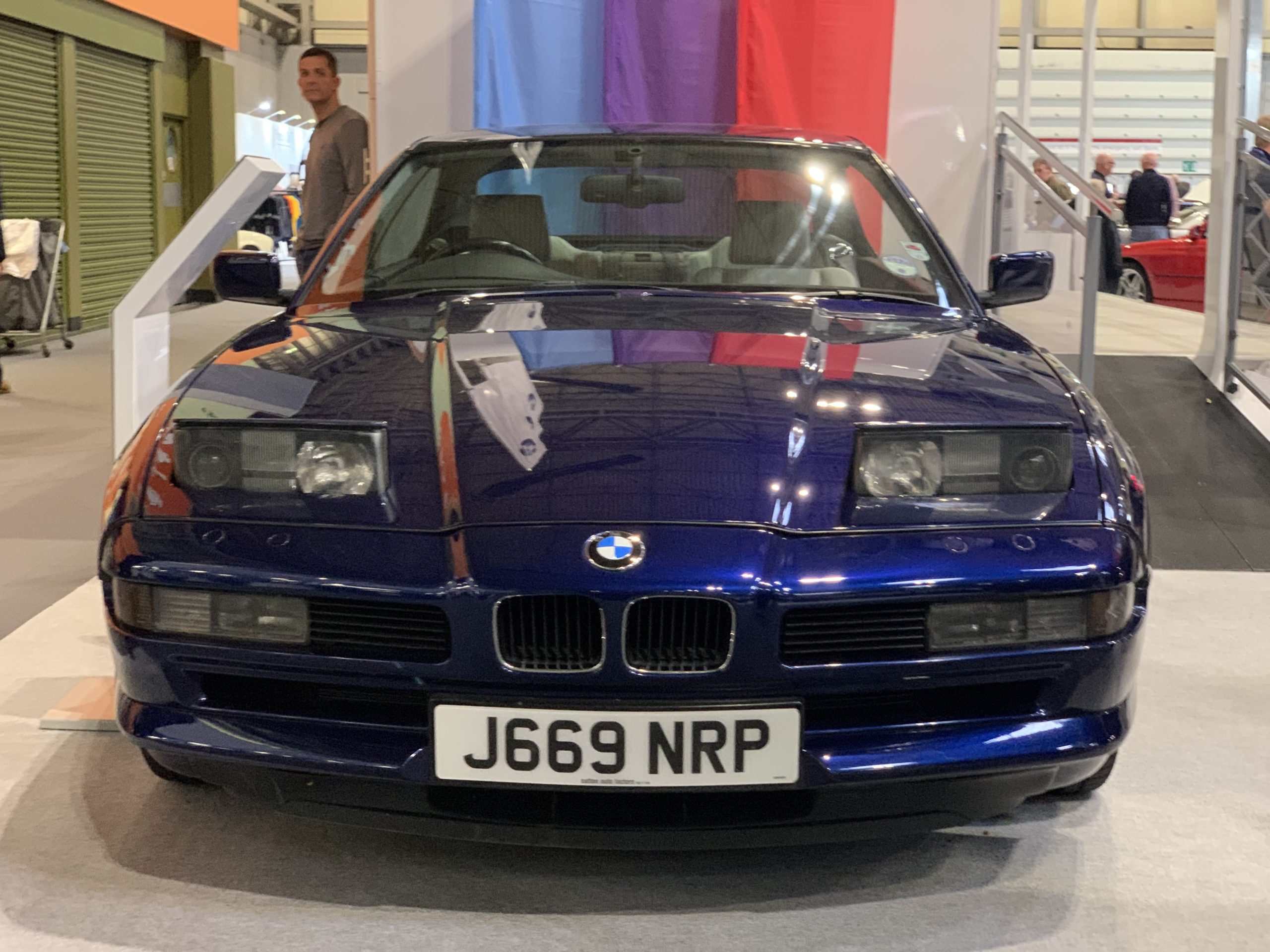 “What a great show! An amazing display of motor cars, and enormous interest in the BMW Car Club stand with its focus on the original 8 Series E31 model, juxtaposed with a brand new M8 Competition vehicle fresh out of the box.

If you’ve never been to this show before (I hadn’t), make it the first entry in your 2020 diary!” 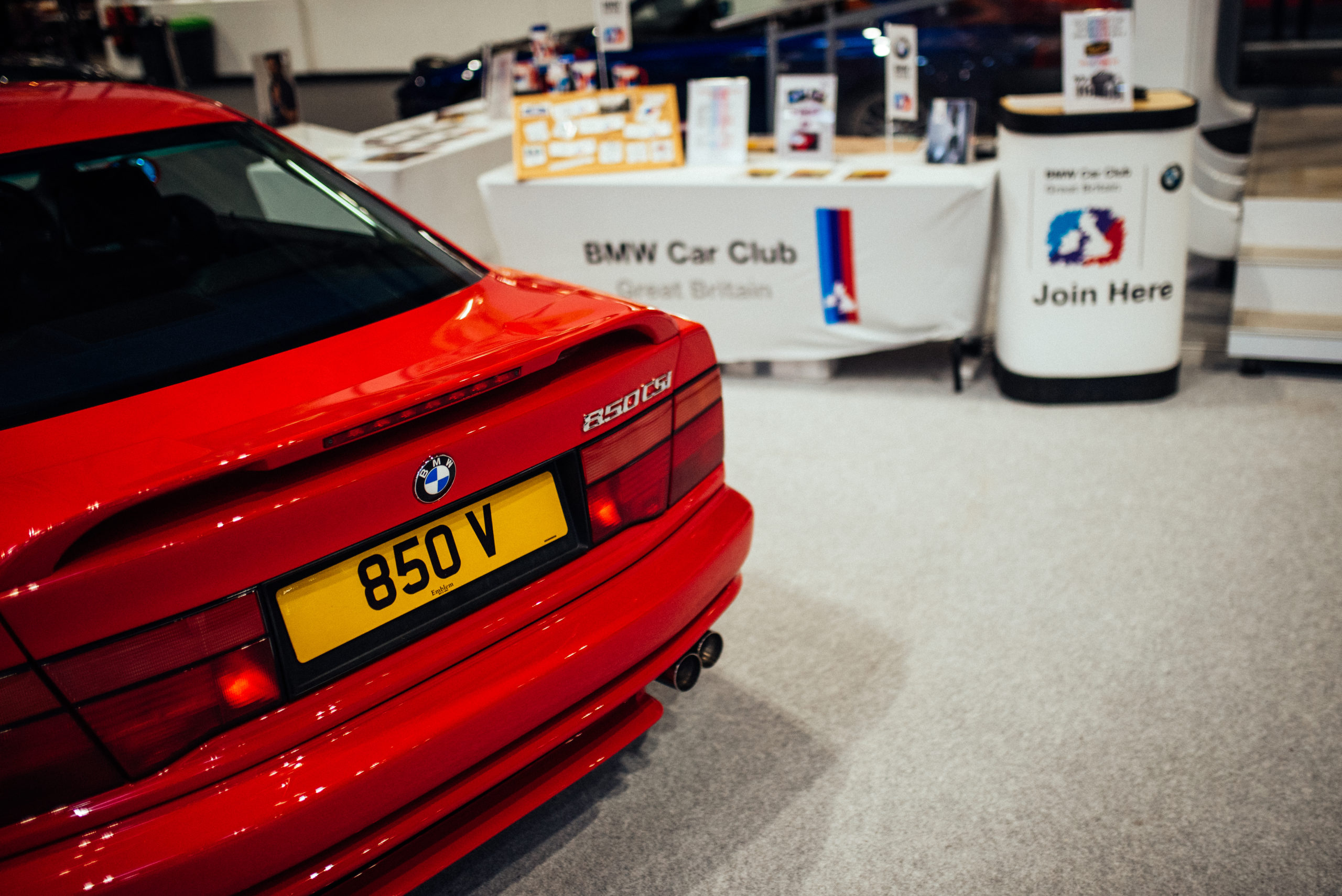 “It was a fantastic event, brilliantly organised displaying some works of art. This is my first car show and I am really grateful to have met the other owners and members, including Debbie and Paul Blythe who run the E31 Register, and Martyn Goodwin who organised the BMW Car Club stand. A brilliant group of people with a love and passion for cars.” 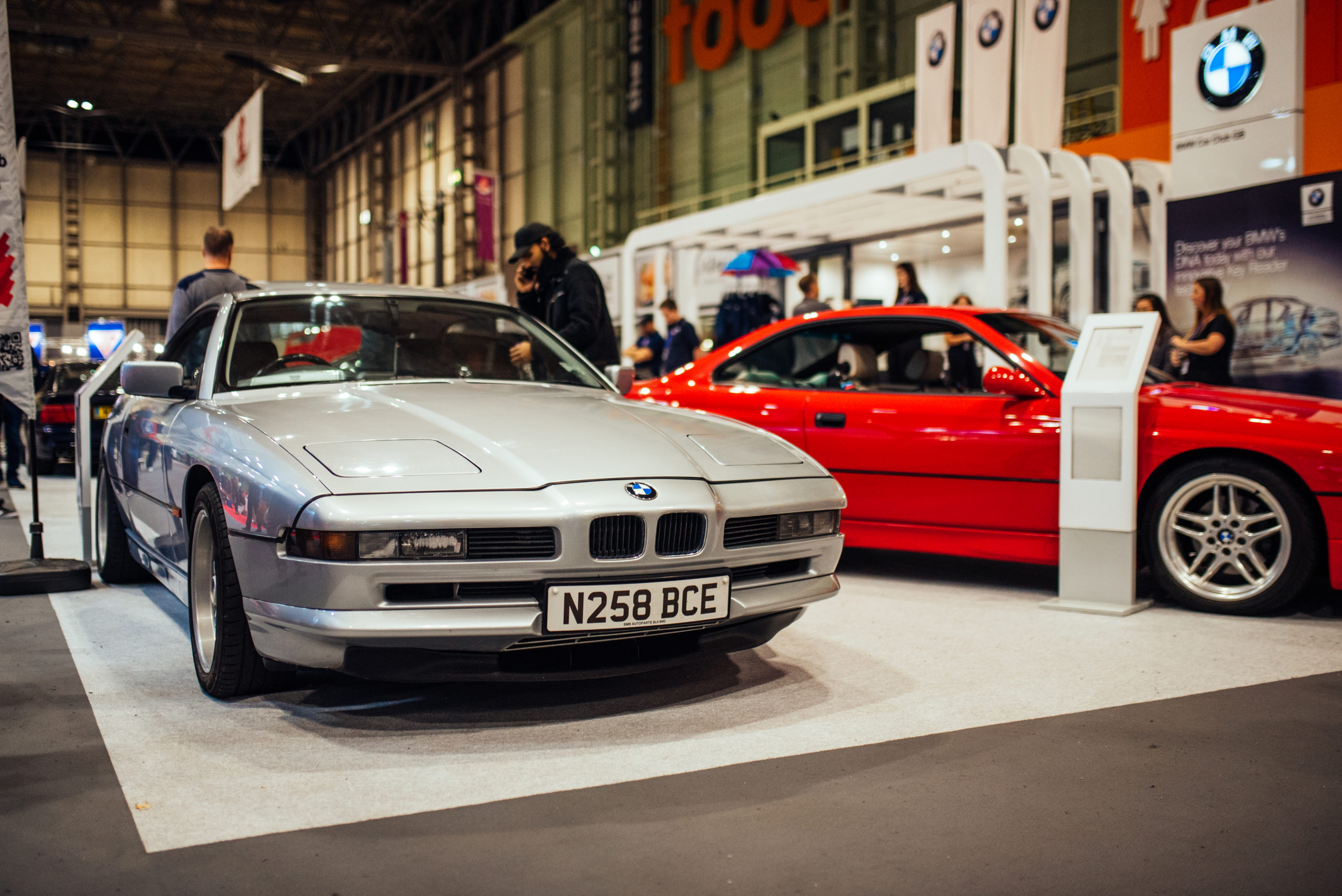 “We were very pleased when Martyn Goodwin contacted us back in February to say they wanted to feature the E31 8 Series on the stand at the NEC show due to it being the 30th anniversary of the model. Although it took a little organising to get 5 owners to give up their cars, time and absorb the cost of doing so, it was an honour for all of us to represent the Club at such a prestigious event.

The stand looked really professional and although we may be biased, probably the best Club stand at the show. We attracted hundreds of interested and appreciative visitors and spoke to many E31 owners, potential owners and other enthusiastic and passionate car lovers. We also had the Set Manager from EastEnders come to us as the show currently features a V12 E31 but it has an engine problem. The person had the mechanic on his phone and Paul was able to offer some suggestions about possible causes and fixes.

This is the first time we had been to such a large car show and it will definitely not be our last, such a brilliant event and full of people really passionate about their cars, whether it was an Austin Allegro or a Rolls Royce. So thank you again BMW Car Club GB for allowing us the pleasure of exhibiting at the show.” 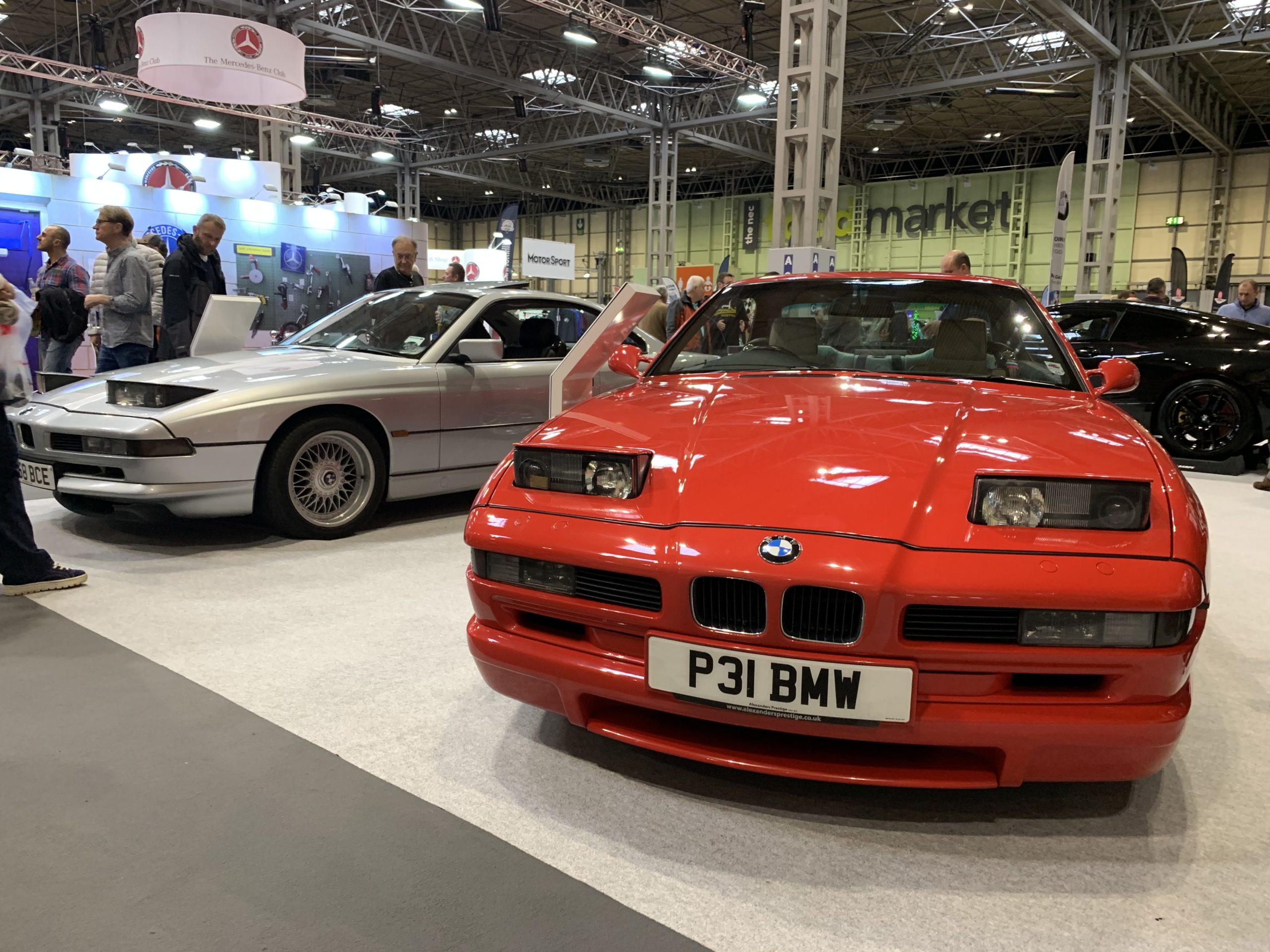 “It was an honour to have the opportunity to display my vehicle on the Club Stand. The Stand was professionally presented with a good representation of E31s together with a stunning example of the new M8 Competition.

It was pleasure to meet some fellow owners and exchange experiences. I was most impressed by how many younger people were interested in and admiring the E31. This clearly shows that it is a truly timeless classic and the opportunity to raise its profile with such a well-represented display was truly deserved. A really big thank you to Martyn and his team for organising the stand and to Debbie for organising the vehicles.” 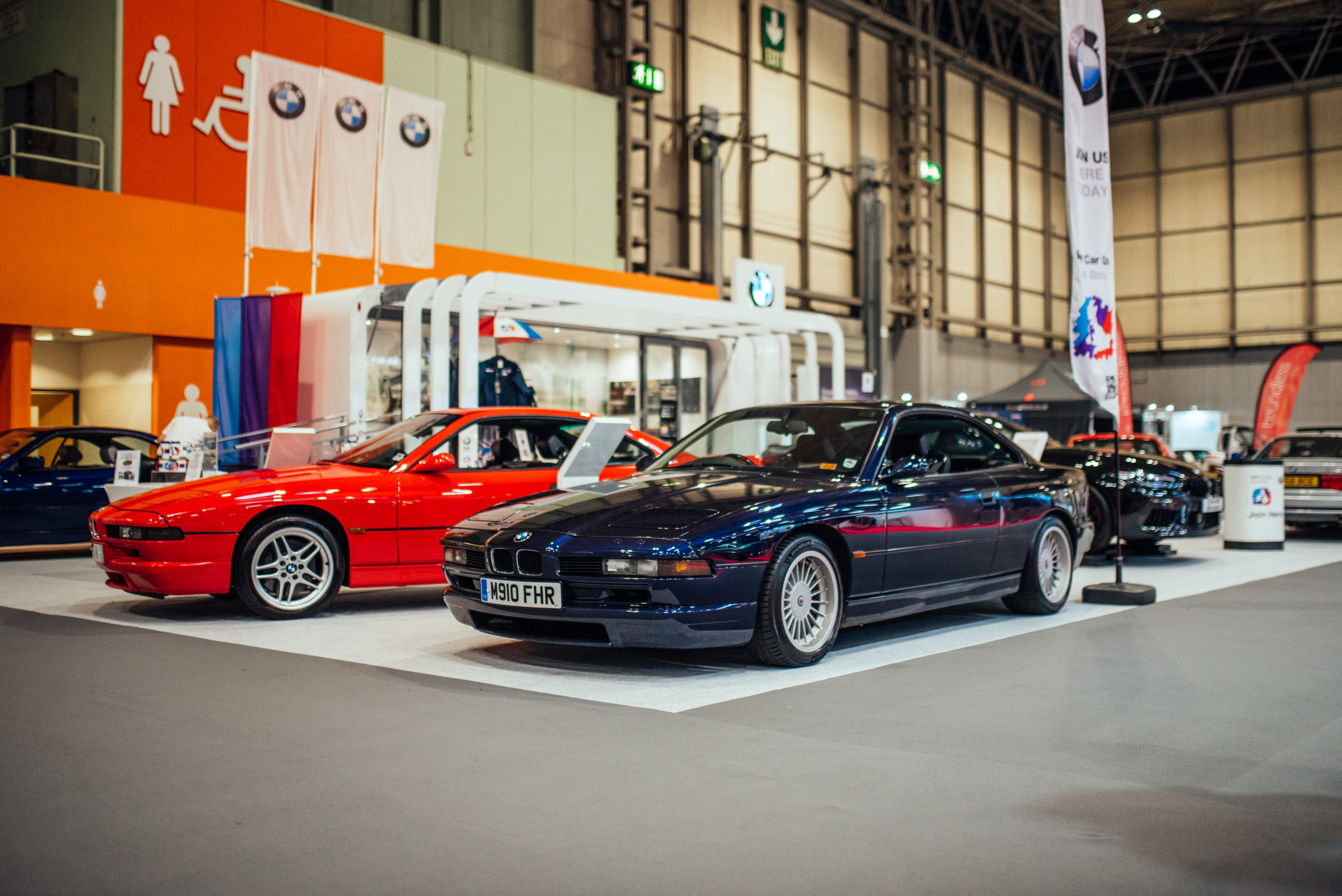 Dj Vu is the slightly uneasy feeling that ‘one has lived through the present situation before’, to quote the Oxford English. And as I parked up in a far-flung carpark at Birmingham’s National Exhibition Centre, I had a striking onset of the condition. It’s freezing cold and raining, but if I take a jacket for the 15-minute walk to the indoor halls, I’ll be stuck carrying it around all day once in the warmth. I remember this exact dilemma last year – a chilly walk to the halls it is.

Yes, the season isn’t officially over until the NEC Classic Motor Show rolls around, and no matter how many times you go, it’s always brilliant being involved in the Nation’s biggest classic car show. You’ve seen a lot of it before but there’s always the lurking oddities, and it’s these unexpected surprises that keep us coming back year after year.

And what was the surprise of 2019? The miniscule display of microcars from the Peel Owners Club – everyone knows of the Peel that Clarkson famously drove through the corridors of the BBC offices during the Top Gear heyday, but did you know that Peel produced an entire range of microcars? Me neither. 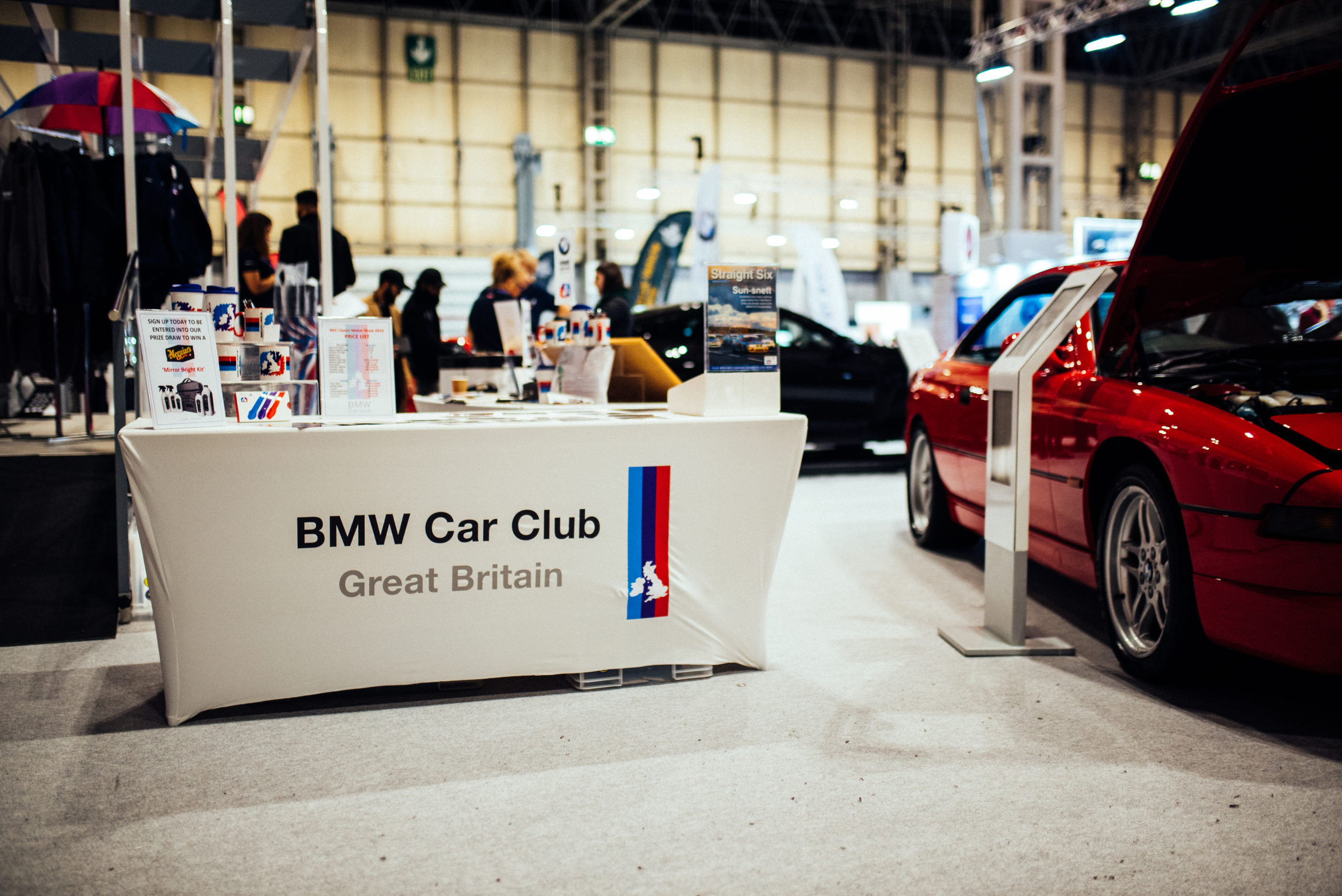 Slightly less obscure but no less impressive was our BMW Car Club stand in the premium Hall One. We chose to use our space to celebrate 30 years of the sleek E31 8 Series, and we had five of the models on display – a pair of the automatic V8 840Ci, a pair of the spectacularly rare manual V12-powered 850CSi, and an 850i auto. It was a great example that really showed the power of what the Club movement can achieve – outside of our own E31 Register, when did you last see four immaculate 8 Series in one place? It was certainly a surprise for many of the 71,000 attendees. 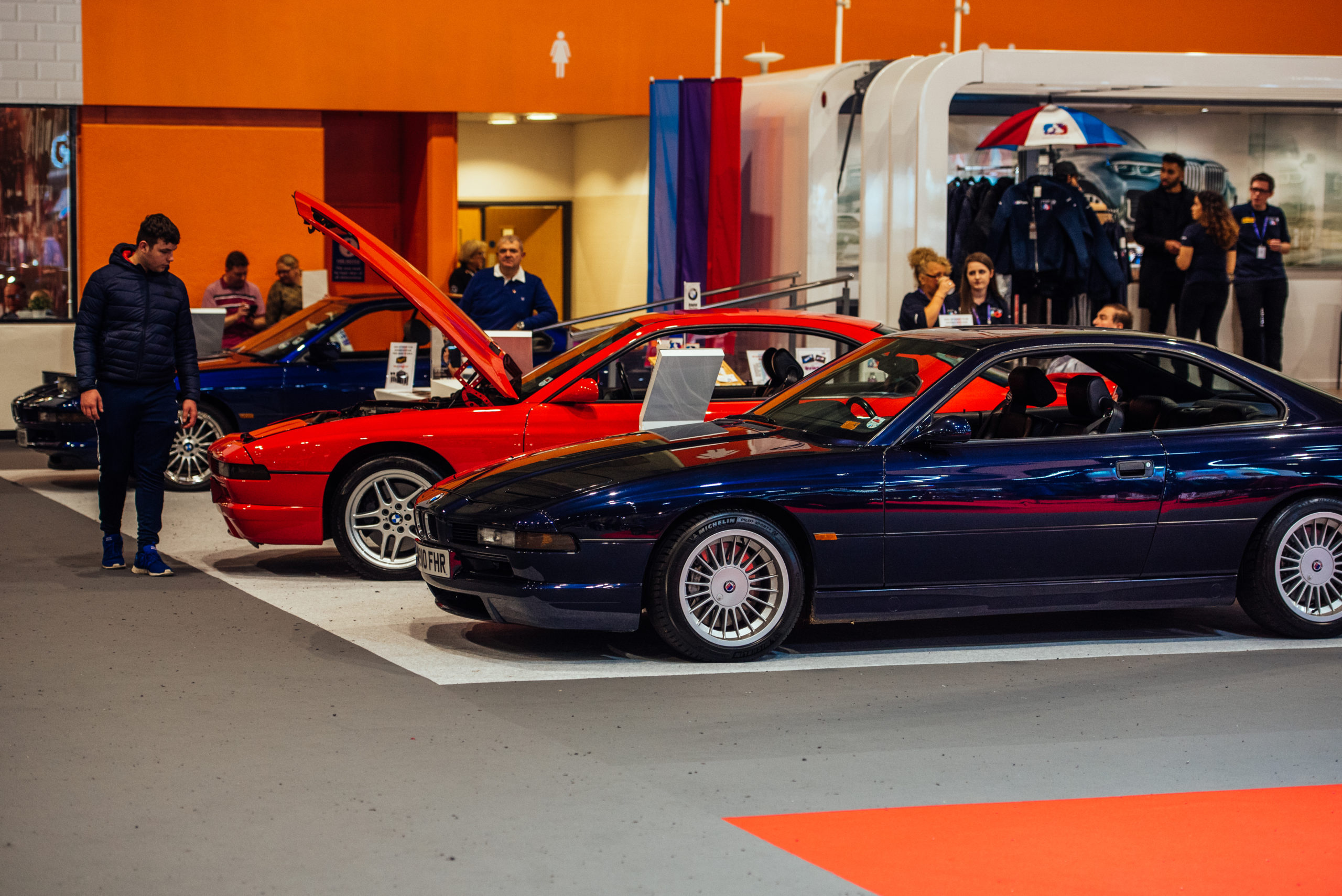 Acting as centrepiece was the brand new 2020 M8 Competition, bookending the history of the 8 Series badge. The M8 Competition was only unveiled to the world a month earlier, and having the car on our stand at the NEC Classic marked the first time the vehicle had been publicly seen in the UK. Resplendent in Black Sapphire Metallic with high-gloss black accents and a spectacularly contrasting Sakhir Orange leather interior, several of the office staff spent many a moment plotting their escape with it.

It’s like a treasure hunt, walking the many halls of the NEC Classic. BMWs dotted here and there, what will you find? Member Dan Wood’s AC Schnitzer E39 540i starring in the Meguiar’s Club Showcase concours competition. A cute little Isetta up for grabs in the auction, and the DTM-inspired E30 build from Goblin Works Garage. One of the Citron clubs even had a BMW GS powered 2CV ute – keep an eye on the Club social channels for more on that one. 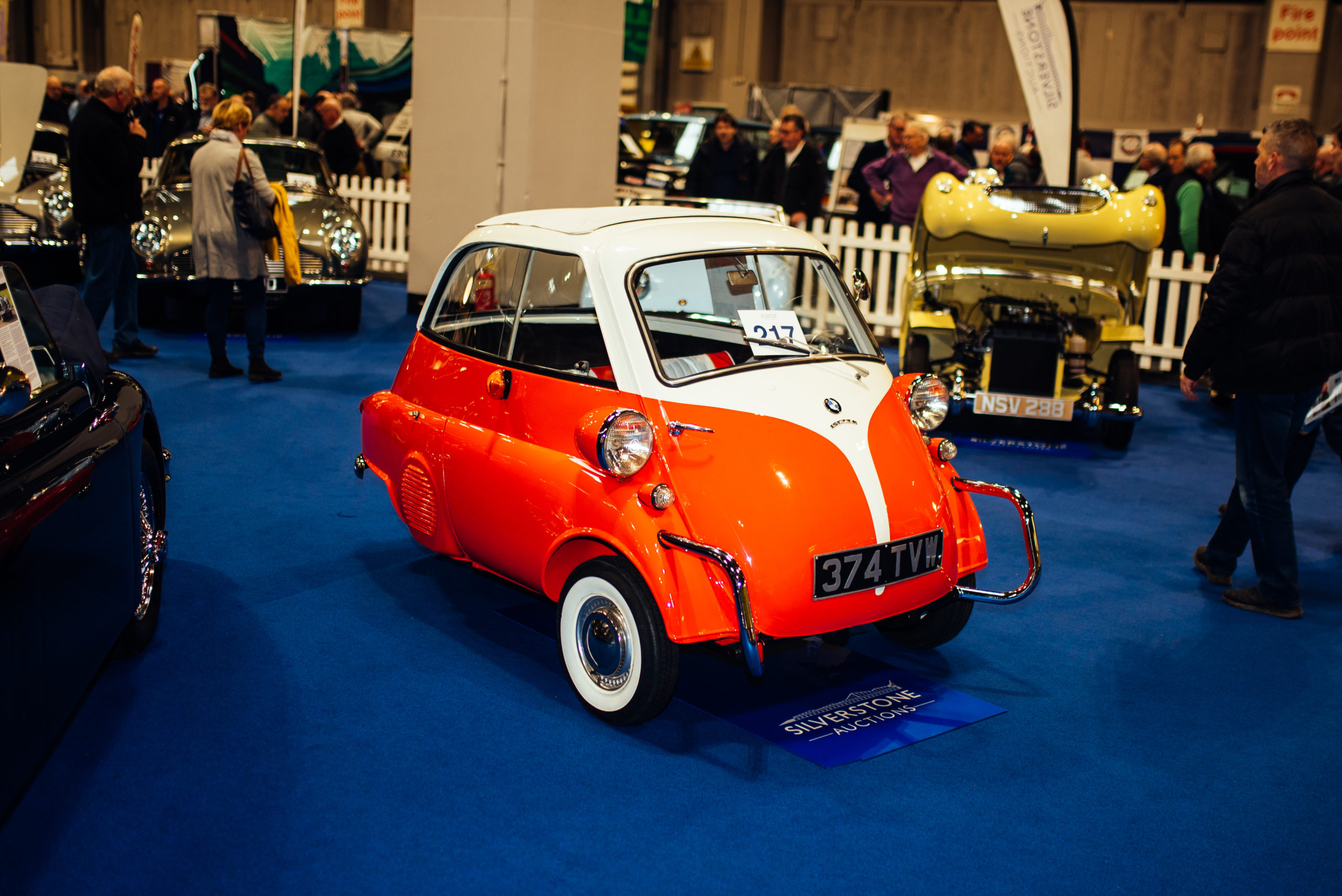 As a place to spend a cold and wintery day rummaging through the auto jumble, catching up with friends and musing as to why someone, somewhere would go to that much effort preserving a Mk2 Nissan Micra (yet you feel strangely thankful that they did), there’s nothing quite like the NEC.