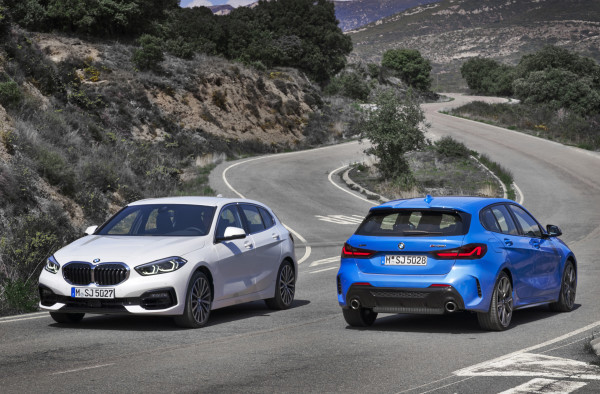 With the introduction of the new, front-wheel-drive 2019 BMW 1 Series Hatchback, BMW has positioned the 1er inline with similar offerings from Audi and Mercedes-Benz… The changeover to front-wheel-drive is reflected in the new proportions of the all-new 1er. The bonnet is now shorter since the engine bay only needs to accommodate 3 and 4-cylinder engines, while the rear design gets a longer roofline. At the rear, the tail is wider, with an athletic shoulder line above the rear wheel arches which (BMW says) “emphasises its sporty character”. Thanks to the traversal mounting of the engine, the new 1 Series offers significantly more interior space.

The wide use of aluminium – for the bonnet and tailgate for instance – has enabled BMW to shave as much as 30kgs off the weight of the new 1 Series compared to its predecessor. The new 1er is 5mm shorter, 34mm wider, 13mm higher and the wheelbase is 20mm shorter than its predecessor. 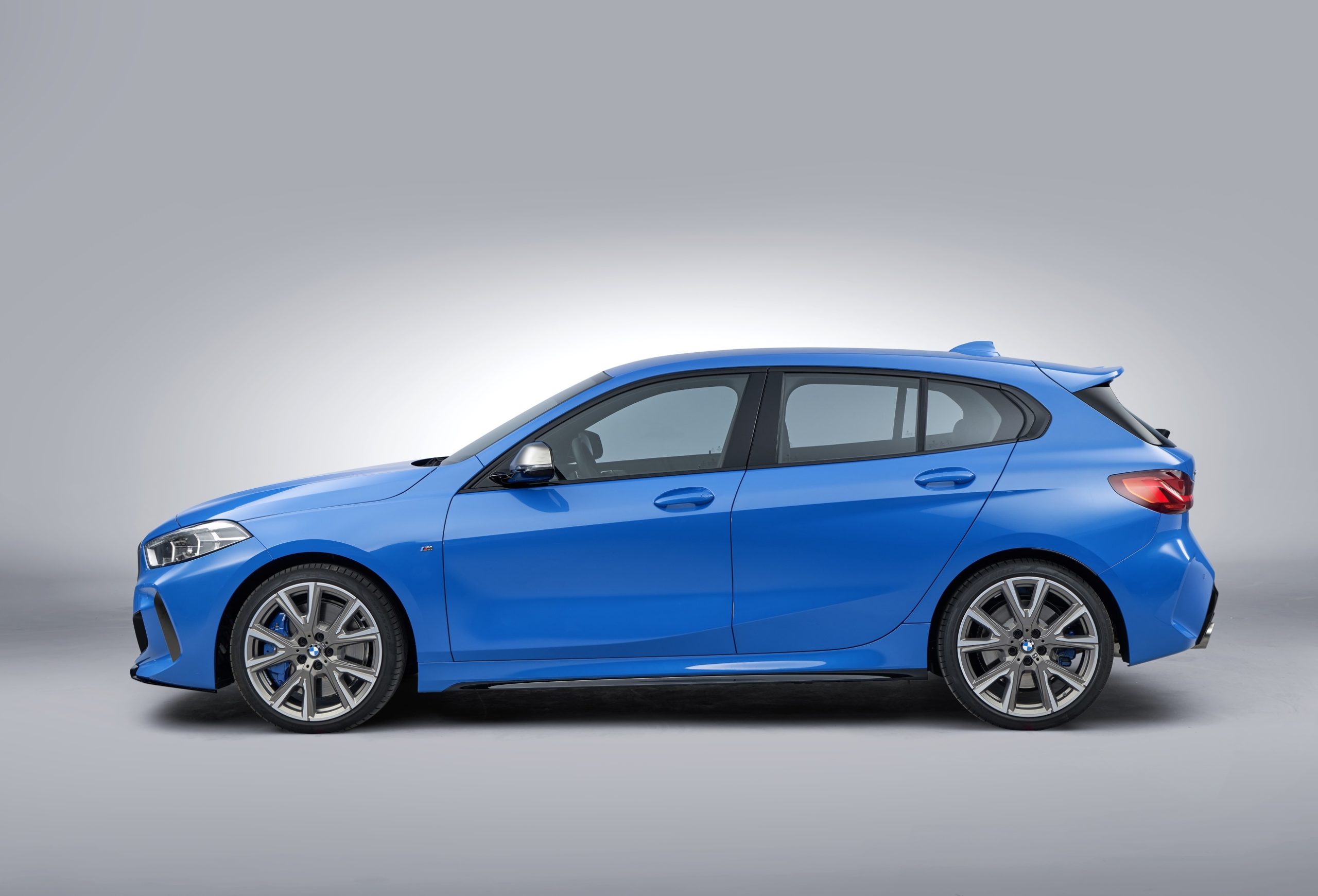 Design wise, the new 1 Series is dominated by its new face. The characteristic BMW kidney grille, as we have seen on the latest 7 Series, X7 etc, has grown much larger and merges in the middle, and has received mixed reviews including a fair bit of criticism. BMW’s designers have worked hard to give the new 1 Series a (slight) shark-nose, as well as still offering the traditional Hofmeister kink in the C-pillar. The rear is dominated by attractive, L-shaped tail lights, with full-LED lights as an option. Concealed under the red coloured light lenses are the turn-signal indicator, brake and tail lights, reversing lights and rear foglamp. A panoramic roof is available as an option for the 1 Series for the first time with a glass area of 0.7m.

The move to front-wheel-drive with transverse engines helps lower what was the transmission tunnel, offering occupants noticeably more space. Access to the rear is easier and there is an extra 33mm of knee-room available in the rear, while rear headroom increases by 19mm, with 13mm more elbow-room. In the front, there is an extra 42mm of elbow-room between the driver and passenger. Boot capacity rises by 20 litres to 380 litres (1,200 litres with the rear seat folded).

The design of the new 1 Series cabin has a similar look and feel to that in the new G20 3 Series, with a driver-oriented layout and new buttons. Access to the (optional) infotainment system is provided by the new BMW Operating System 7.0 – via a large display grouping whose two large screens, including a 10.25″ screen (with BMW Live Cockpit Professional) plus the (optional) full-colour 9.2″ Head-Up Display, allow the driver to receive information without taking their eyes off the road. The base ‘BMW Live Cockpit’ and ‘BMW Live Cockpit Plus’, which includes navigation system and Apple CarPlay preparation, both have two classic analogue dials and a 5.1″, 4:3 portrait-format screen which displays information such as the car’s speed, the status of the driver assistance systems and navigation instructions. In total, there are four distinctive packages with differing levels of equipment – the Advantage (base) model, a Sport Line model, a Luxury Line model and an M Sport model.

There are three suspension options. Besides the standard suspension, which already has a dynamically inclined set-up and is specially tuned to the different engine variants, plus the M Sport suspension which is stiffer and has a 10mm reduction in ride height, the new 1 Series can also be specified with the Adaptive suspension including VDC (Variable Damper Control) as an option.

Engine-wise, the top-line model is the M135i xDrive which uses the most powerful 2-litre, 4-cylinder engine, producing 306hp and 450Nm of torque with the help of BMW TwinPower Turbo technology, allowing the M135i to sprint from rest to 60mph in just 4.6 seconds; top speed is (limited to) 155 mph.

Three diesel models are also available at launch, a 3-cylinder 116d, 118d and a 120d xDrive with a standard 8-speed Steptronic autobox.

There are a myriad of options, connectivity, driver assistance systems available on the new 1 Series, far too much to list here, so please contact your local dealer or go online to bmw.co.uk for more info, tech specs etc. 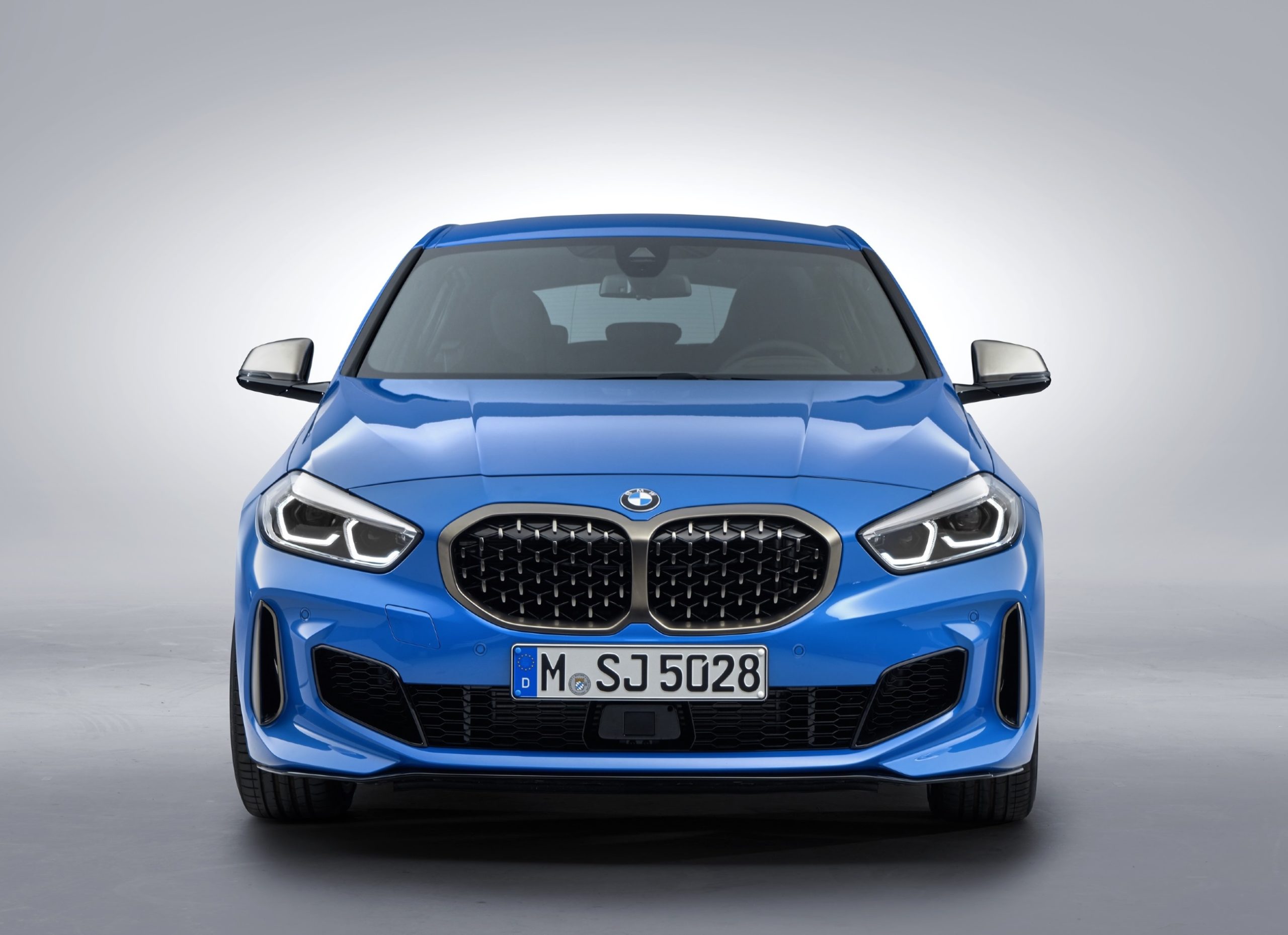 BMW’s Z4 to get a manual gearbox

BMW has bowed to pressure from both the motoring press and customers alike when announcing that a 6-speed manual Z4 will be available from July onwards. Unfortunately, the manual choice will only be available on the entry-level model, the Z4 sDrive20i… for now!

The sDrive20i model will still be available with the 8-speed autobox, and so equipped and mated with the turbo four-pot under the bonnet kicking out 194hp and 236 lb-ft of torque, it is capable of hitting 60 mph from rest in 6.6 seconds, which isn’t shabby at all.

BMW may decide to make the manual ‘box available on more models as a no cost option, depending on the popularity of the manual sDrive20i, and sales of course! 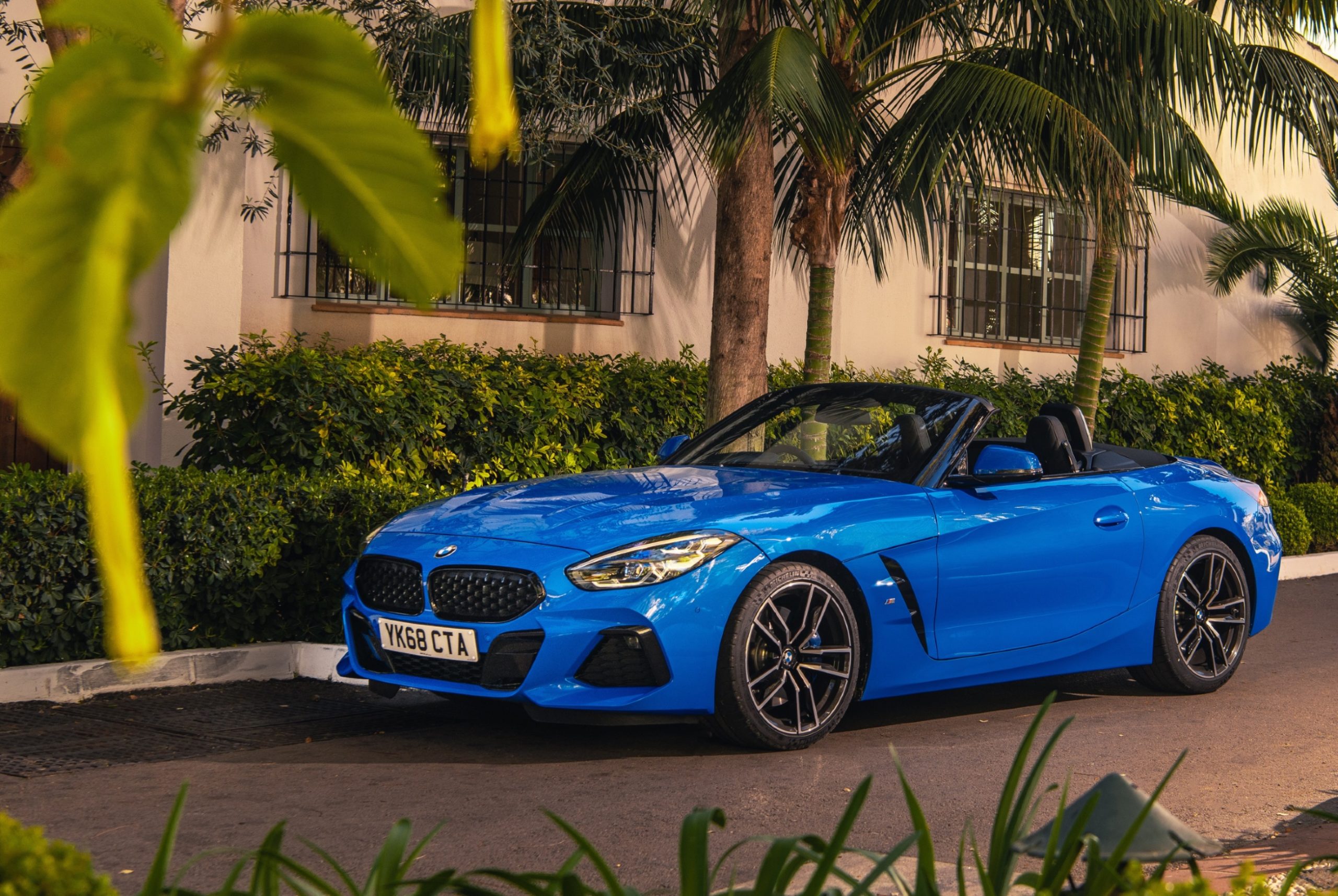 Just as we were going to press, BMW released brief details of the newly-facelifted X1.  Exterior-wise, the biggest changes to the X1 are at the front. New, larger kidney grilles, merged in the middle, dominate the frontal changes. The X1 also gains new Adaptive LED headlights, larger front air intakes and more integrated LED foglights. At the rear, new tail lights are the obvious change, and they do look better than those on the previous X1.

The interior has been given a revamp, with the latest iDrive screen fitted along with plusher materials used more liberally throughout the cabin, giving the X1 a more grown-up, sophisticated look.

The changes do give the X1 a more grown-up vibe, looking all the world a rival for big brother X3, and in many ways, it almost makes its twin, the X2, redundant – it makes you ask, does BMW really need all these niche models?

Details were sketchy as we went to press, so check BMW UK’s website or at your local dealer for spec details, prices etc. The facelifted X1 should reach UK showrooms by the end of 2019. 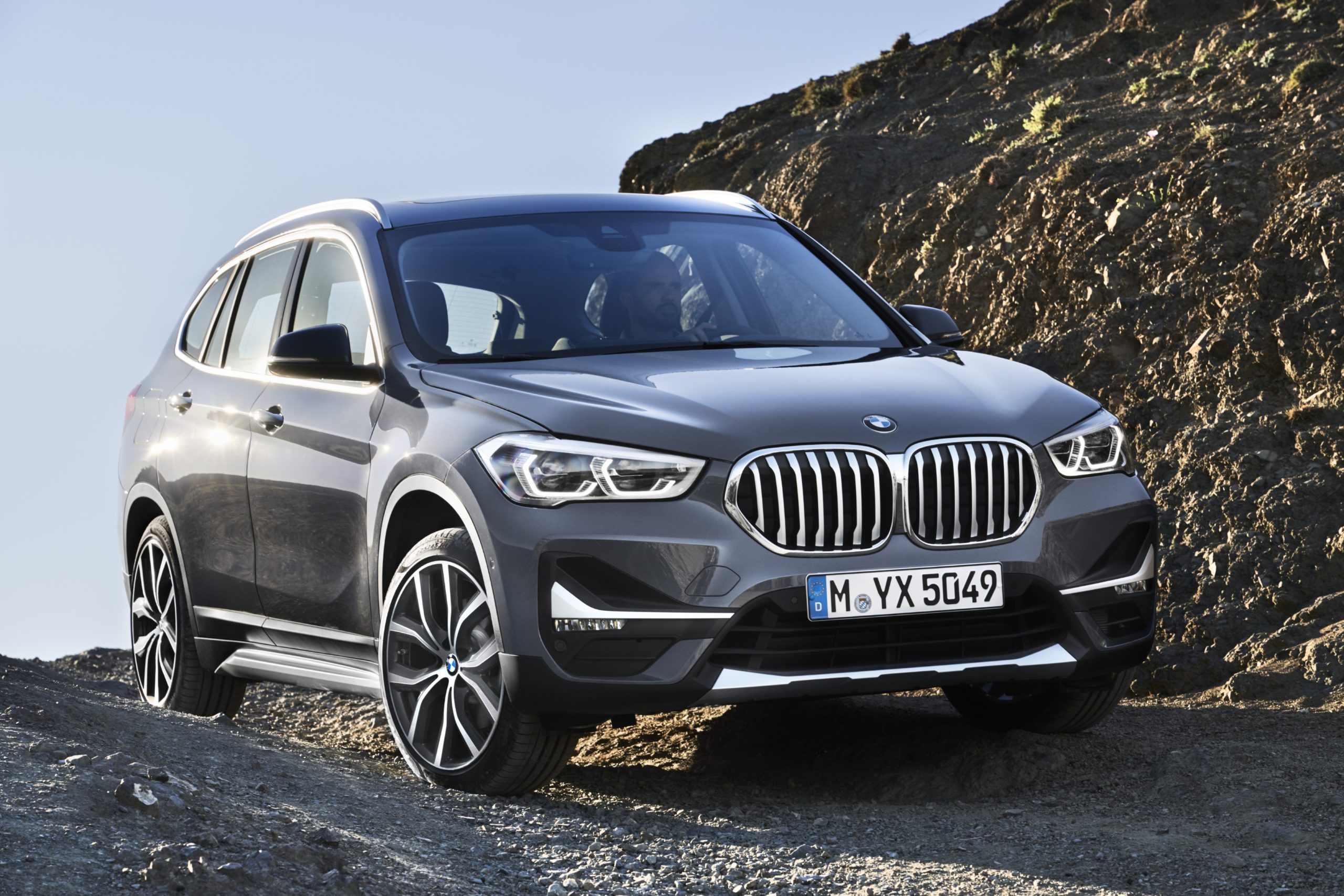