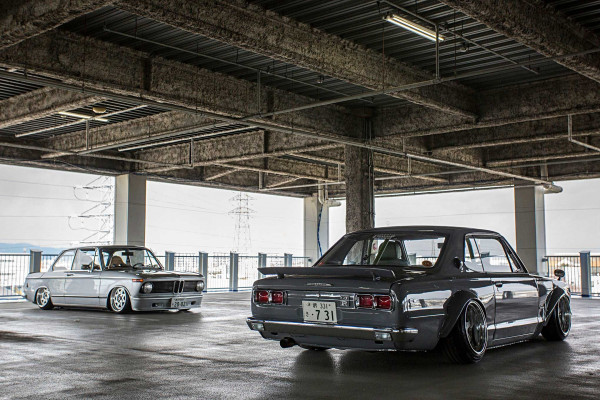 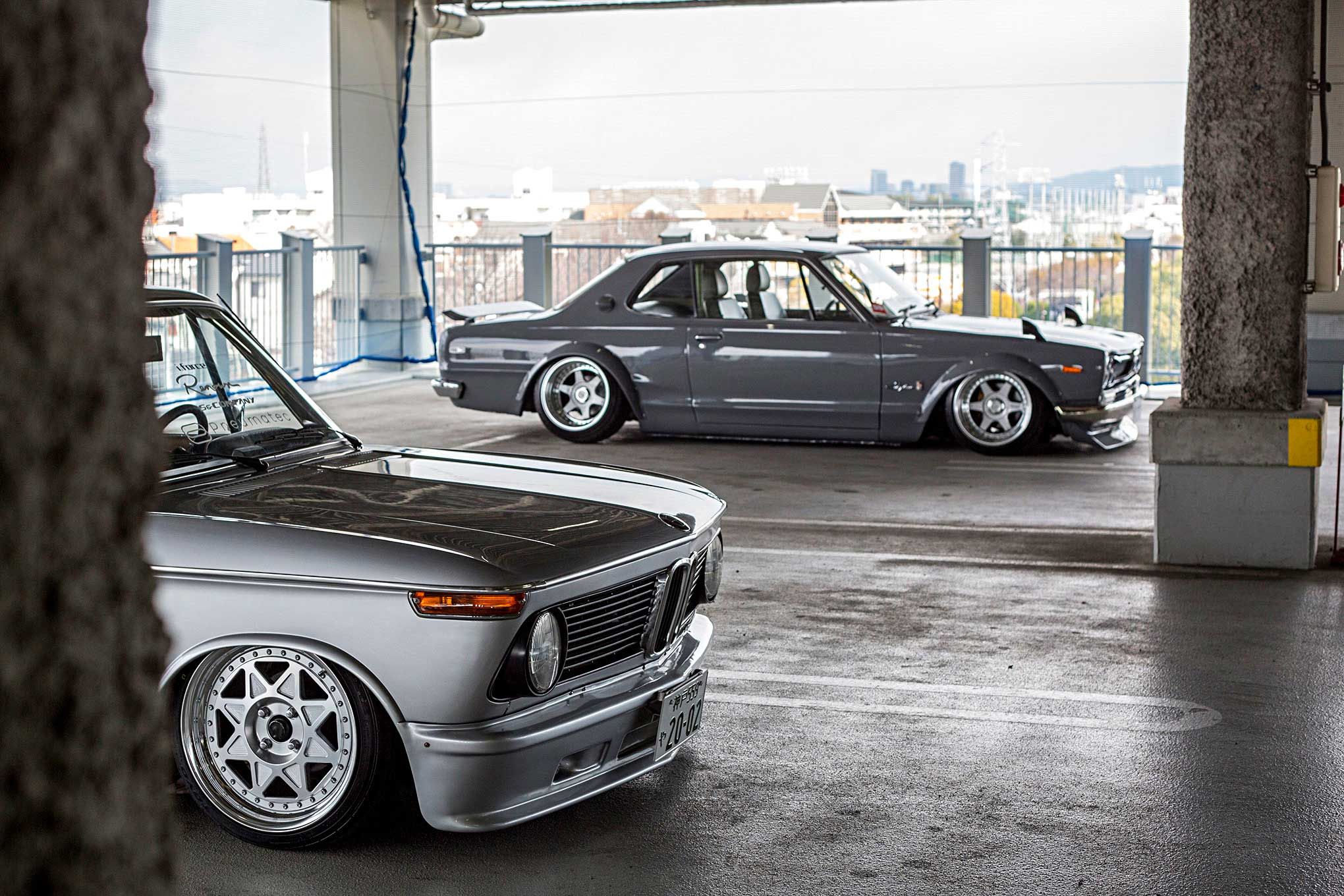 The Hakosuka Skyline and BMW 2002 are two collector cars we really can’t get enough of here at Super Street. It shouldn’t matter if you’re into JDM or Euros, hot rods or trucks, the Hakosuka and 2002 are beyond cult classics and are simply legendary in the car world. Both are compact, boxy, and engineered for pure driving enjoyment, and in Japan they’re also two of the hardest cars to get your sweaty paws on. It comes as no surprise that a decent-condition Hako goes for as much as an R35 GT-R, but the 2002, while not as speedy, is equally rare, which is why all of Osaka Auto Messe was stunned when they saw what AP Garage brought this year. 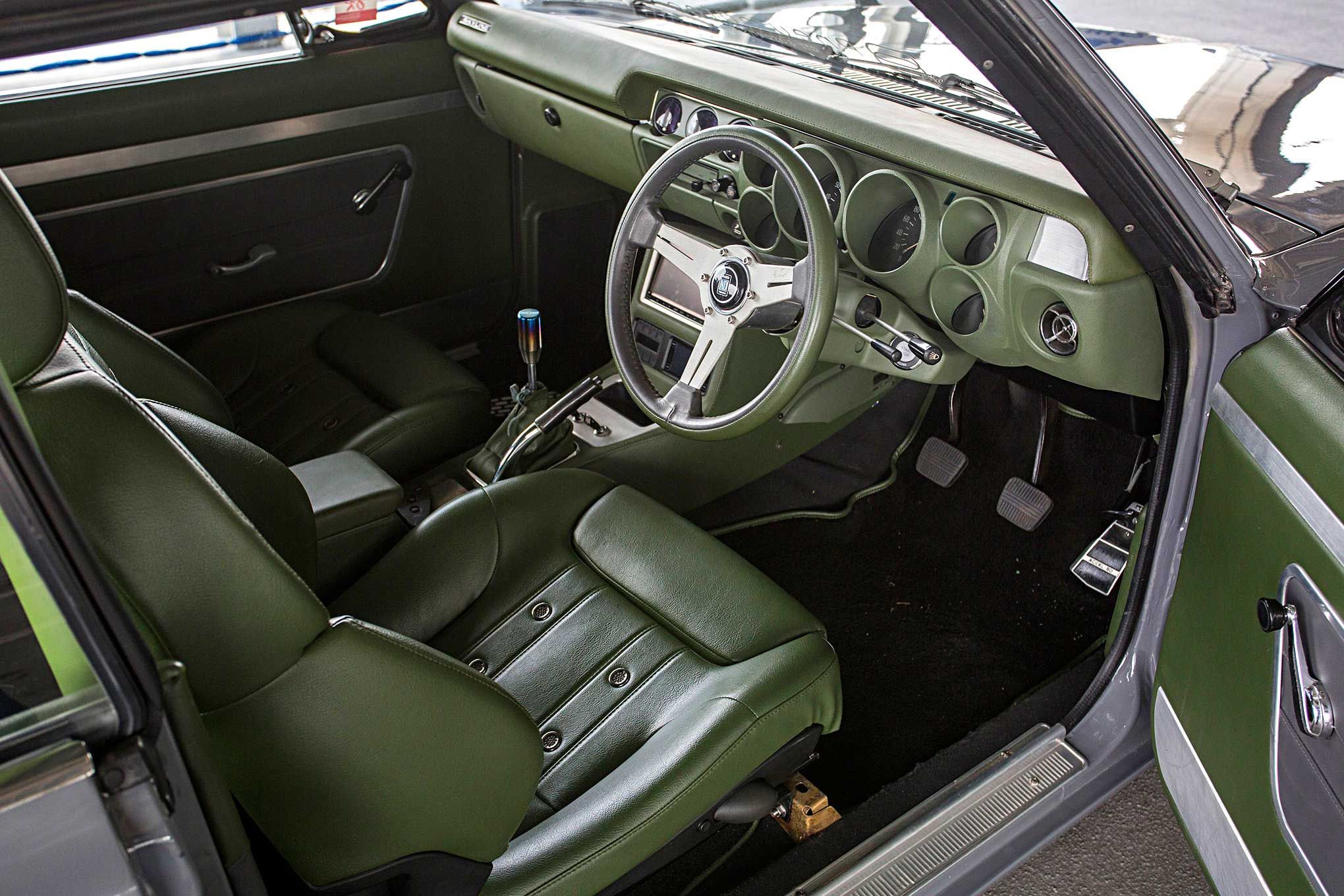 Honestly speaking, without attending Auto Messe, we’d probably have never discovered AP Garage. They’ve never made the trek up to Tokyo Auto Salon, and they’re still pretty new to the game. Based in Osaka, they opened up shop in the fall of ’14, focusing on suspension tuning and alignments. They’d later add full car sales and modification work down the line, while building demo cars as their main form of marketing. With an emphasis on Euros first, they put together a heavily modified BMW wagon and Audi A3 at Auto Messe ’15 and ’16. A year later, they broke out at Auto Messe with an Old & New Porsche 997 and a S54-powered E30 BMW. This year, they continued their momentum with a larger booth highlighted by a ’70 Nissan Skyline and ’75 BMW 2002. AP also unveiled its new air suspension line called Pneumatic, which both classics used along with the Porsche Cayman and Boxster featured elsewhere in this issue. We spent three full days at Auto Messe and it was clear AP Garage assembled the largest crowds. And since we were staying an extra day in Osaka following the show, it was only fitting we’d rendezvous up with them to ensure they’d be included into this year’s Japan issue. 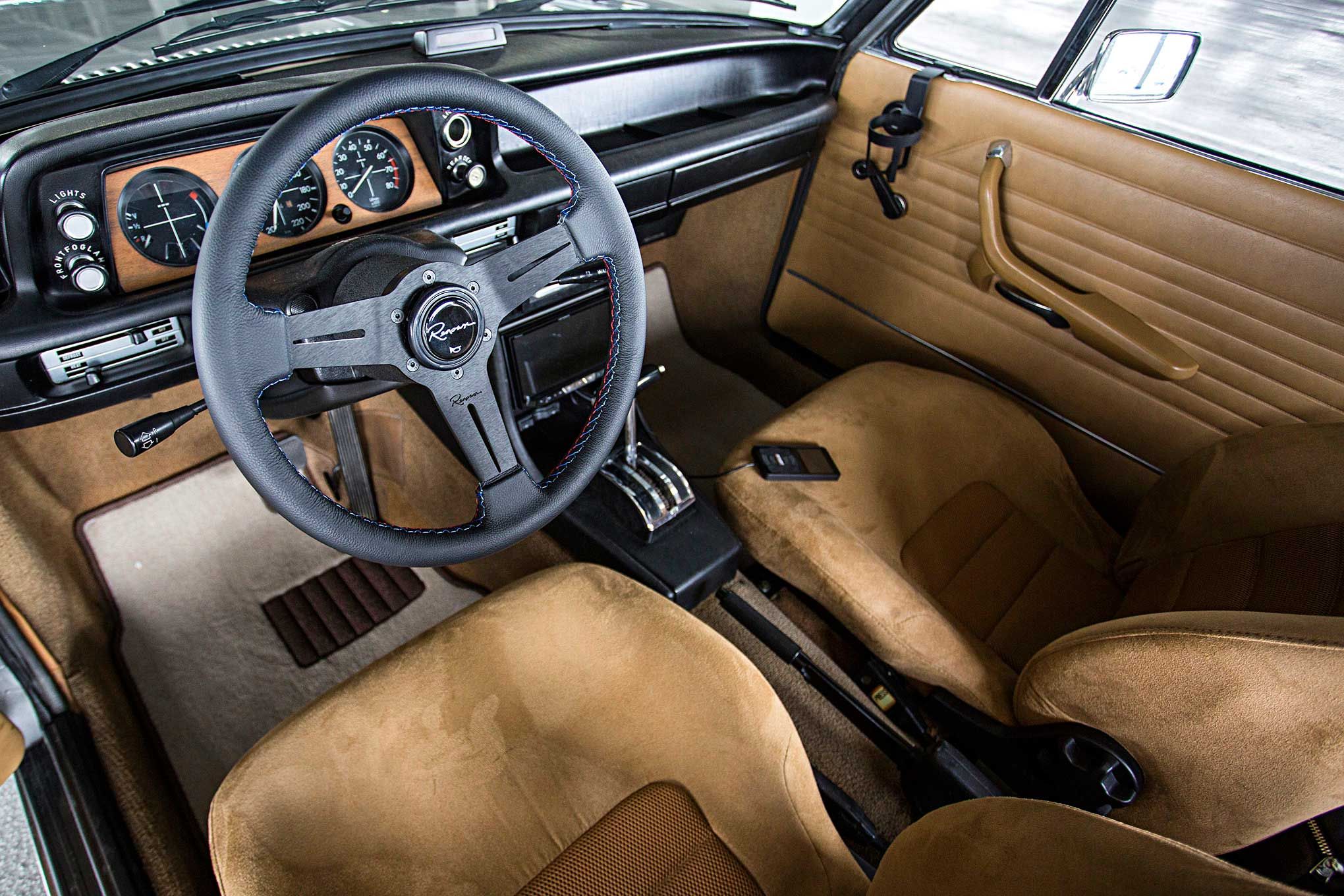 The Hakosuka is the more extensive build of the two. While it looks like it wears GT-R bits and badges, it is in fact a 2000 GT-X model. Under the hood, AP swapped in a larger L28 straight-six, but the real beauty is in all the exterior and cabin renovations: new bumpers, fender flares, a perfect paint job, and a stellar leather interior upholstered dark green. Some restomod cues can be seen such as a trick push-button start as well as its air ride controls integrated into the center console. The project took four years to finish, and while much of the car has been modified, replaced, or repaired, we can’t help but feel it still carries the original attractiveness of the Hakosuka quite well. 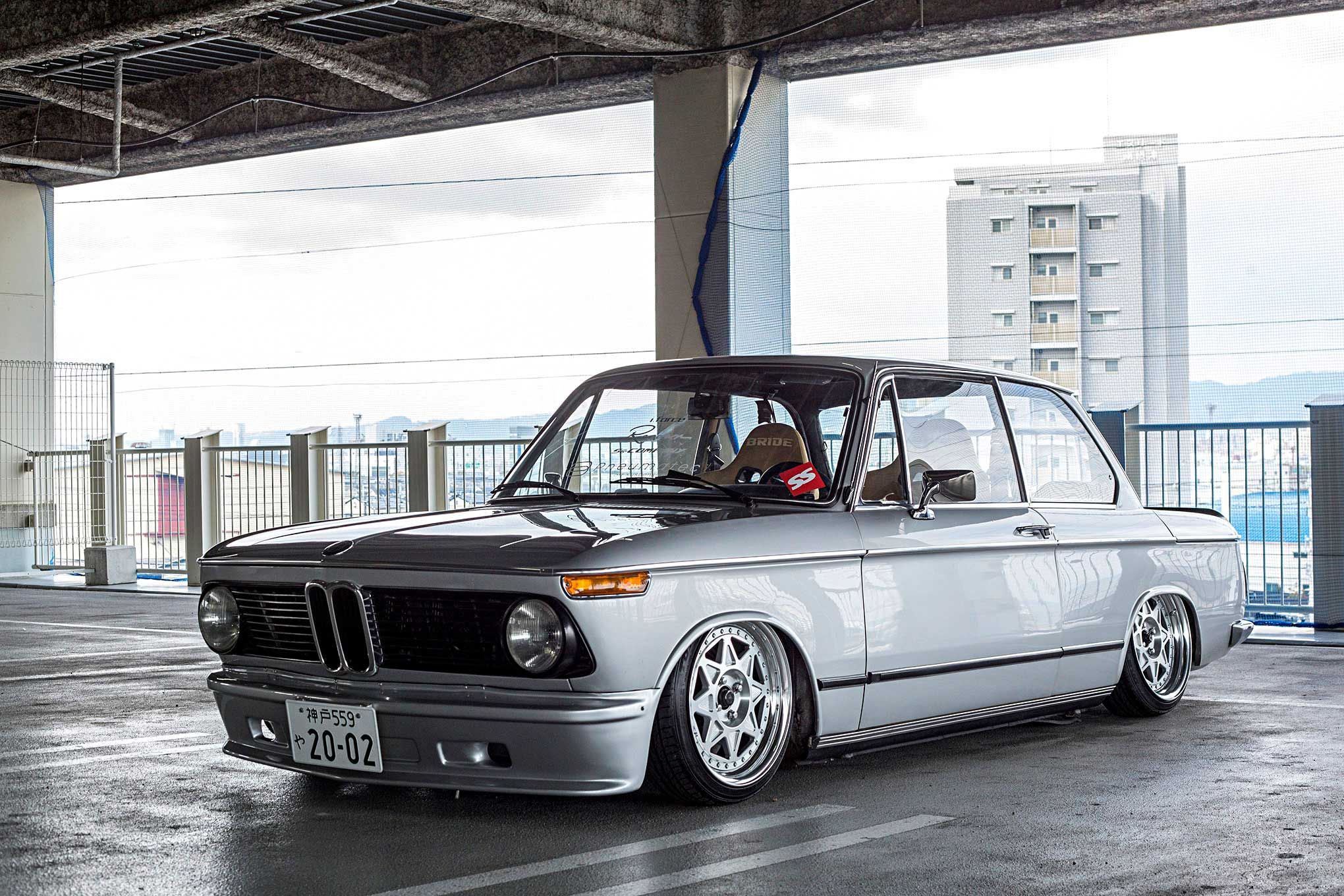 The 2002 is still a work in progress. The interior houses Bride seats that’ve been upholstered in tan suede while the rest of the cockpit was given a refresh with new leather and suede. The remainder of the BMW remains more or less stock minus the wheels and suspension; however, after doing some digging, modified 2002s in Japan are quite frankly unheard of, so it was the reason why so Auto Messe attendees were tripping out to see one on air.

AP tells us the next step is to keep updating the old Bimmer to make it more enjoyable and comfortable to drive. They’ve modernized all the audio components with Pioneer’s high-end brand Carrozzeria, but power windows and an operational air conditioner are on the way.

Chairs comments; Thanks to Sam for the article. Shame the 02 was a “stock” Automatic and isn’t a Tii or Turbo to get nearer the performance of the Skyline, I am sure we’ll see more of this from Super Street Online soon. 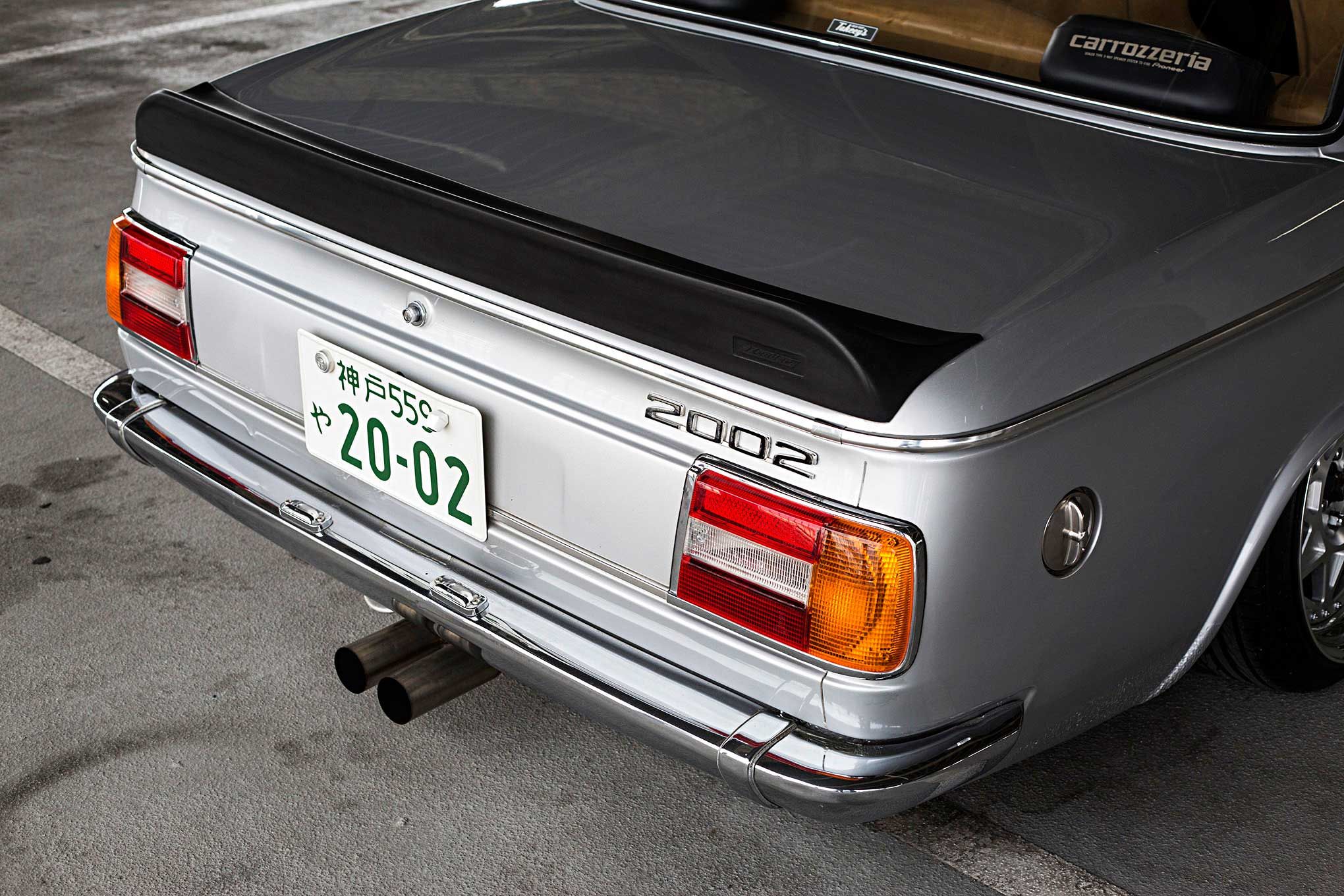