Back in the ’80s, BMW’s Motorsport division was on a roll: from touring cars to rallying to Formula 1, its competition programme was racking up wins like there was no, well, competition.

Great for fans of the marque, even better for those who bought an M-car – one of the German maker’s fabled high-performance saloons, sprinkled with a healthy dose of that racing magic.

While it’s now a trademark for blistering Beemers, though, that ‘M’ badge was once a mere twinkle in the eye of a few visionary people.

Rooted in the ’70s, realised in the ’80s and revered today, here’s the story of BMW’s ultimate driving machines. 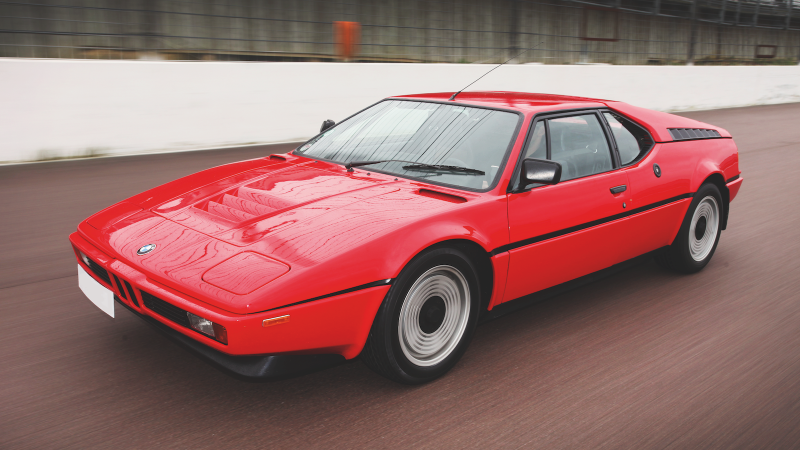 In the beginning, there was the M1

To find the first car that bore the famous letter, we have to rewind all the way back to 1978, to the mighty BMW M1 – a beast born of a simple goal: beating Porsche in sports car racing.

Before it could hit the track, 400 roadgoing examples of the M1 had to be built to qualify the new car for racing – the theory running that it was cheaper for BMW to turn a competition machine into a road car than vice versa. 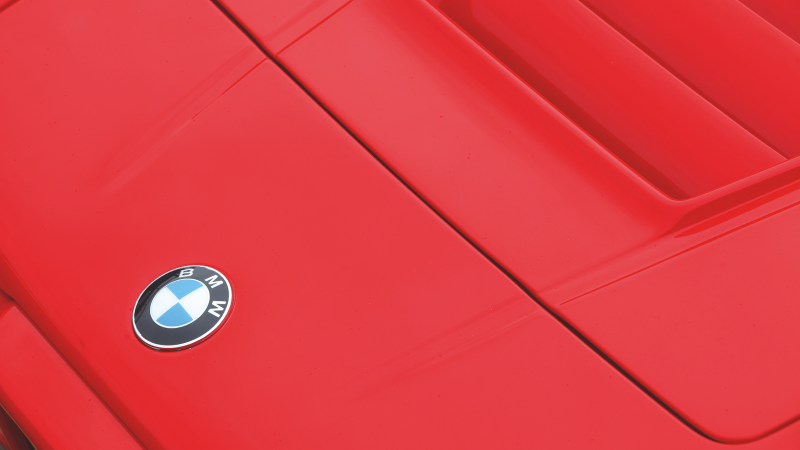 Built by Beemer’s motorsport division, it fell to famed designer Giorgetto Giugiaro to design the glassfibre body. Blending supercar looks with good visibility, it was crafted in Turin by his design house, ItalDesign.

Once finished, the shell was sent to Baur, which fitted it to the M1’s lightweight tubular spaceframe, before final assembly was carried out in Munich. 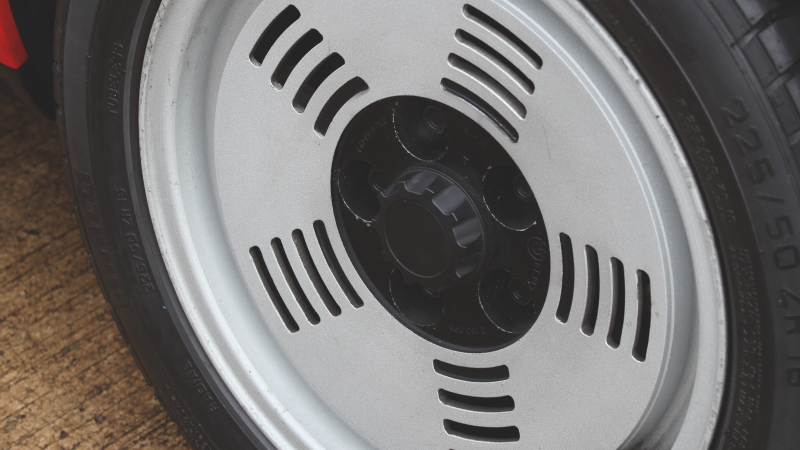 Let down by Lambo

Sounds complex? It wasn’t meant to be. Lamborghini was supposed to play a part in creating the racer, except the cash-strapped Italian firm was struggling to make its own cars, let alone anyone else’s.

BMW pulled out of the deal before things went south, enlisting the help of a few former Lambo employees to get things finished. 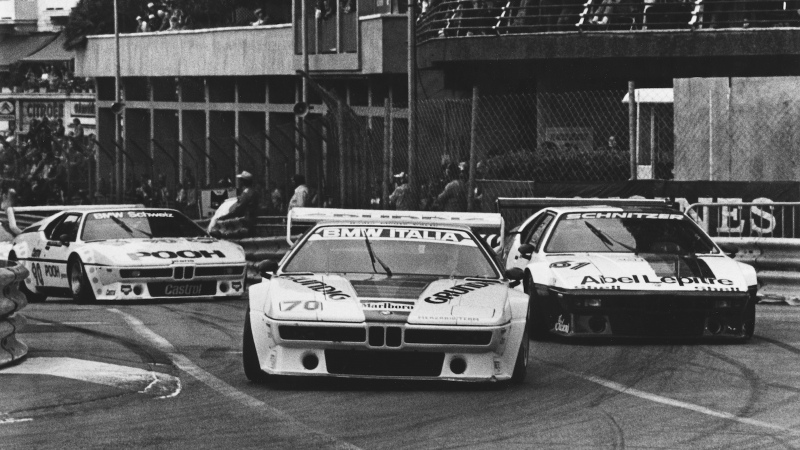 By the time it had produced the 400 cars required by homologation regulations, though, racing had moved on – meaning the M1 didn’t achieve the on-track success BMW had hoped for.

Most people today remember the model from the one-make Procar series in the late ’70s – a clever marketing ploy to boost the model’s profile. 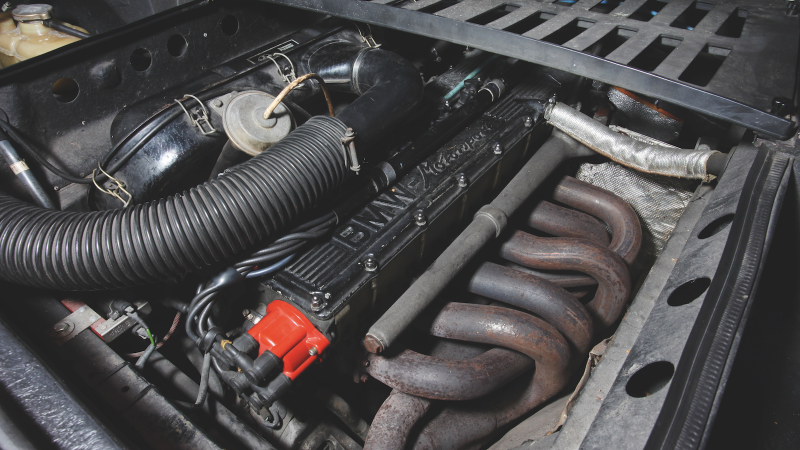 While racing success wasn’t forthcoming, though, there was little wrong with the road car – and its mid-mounted M88 straight-six engine would become the backbone of the M range for the next decade.

Derived from a 635CSi engine, it was tweaked and revised to produce 277bhp, enough to propel the M1 to 100mph in just 13 seconds. 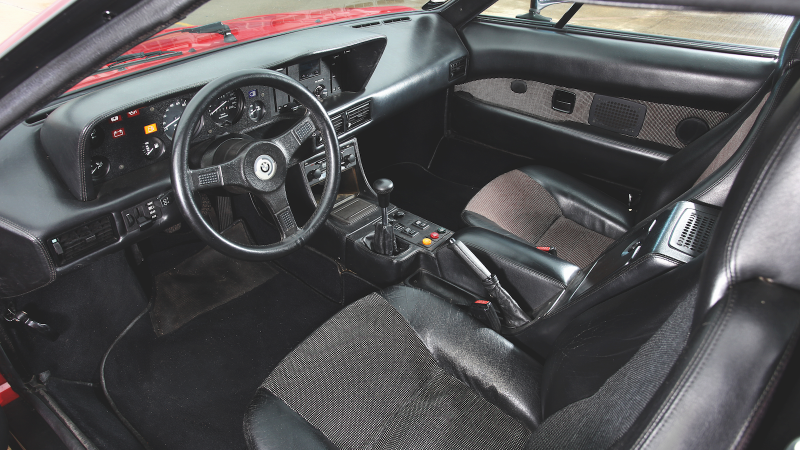 Not Porsche 911 Turbo quick, fine, but the BMW motor delivered an addictive howl like nothing else. It cornered more securely, too, with forgiving handling that could tackle, well, anything.

In fact, it represented a mainstream manufacturer taking on the established supercar elite with a model handicapped by none of the compromises dismissed elsewhere as ‘characterful’. 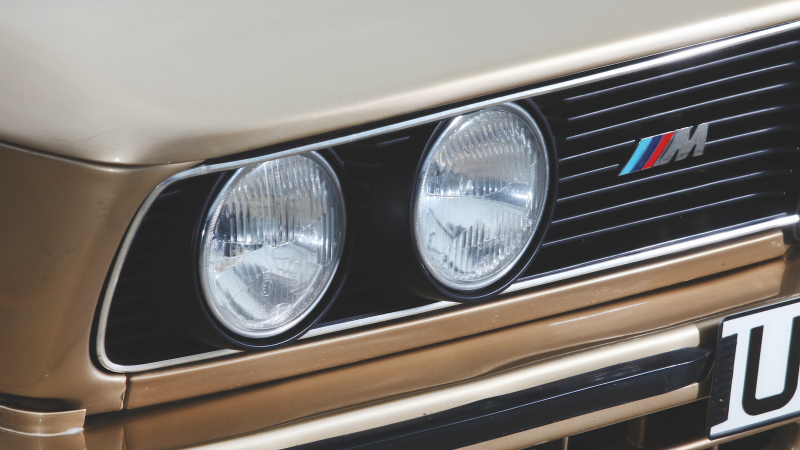 M for the masses

So, it might not have fulfilled its original brief, but the road car showed what the M division – run by Jochen Neerpasch – was capable of. And it was all that was needed to convince him to turn that expertise onto BMW’s existing range – starting with the ageing E12 line.

While the M1 was very much a product of the motorsport division, the first proper M saloon, the M535i, would be a joint effort with BMW’s mainstream arm. 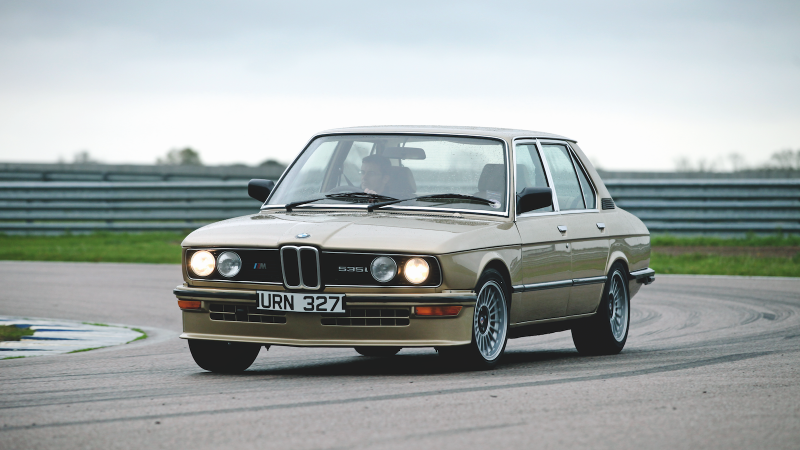 Taking the mechanical components of the 635CSi and fitting them to a body that was 68kg lighter created a formidable super-saloon that gave the E12 range a last hurrah.

Changes to the original Bertone styling were minimal, but sufficient to hint at the extra performance on offer: a glassfibre dam at the front channelled air to the oil cooler and brakes, while a rubber spoiler was added to the bootlid to help high-speed stability. 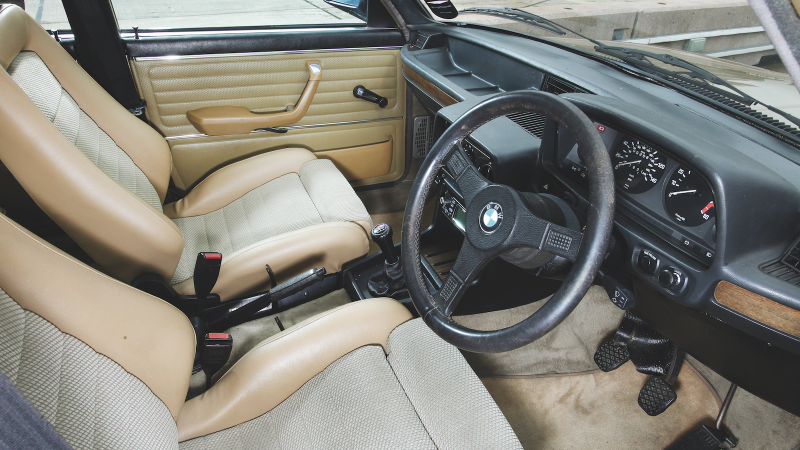 It gained a special interior, too, with Recaro sports seats and a chunky, leather-trimmed wheel.

As a package, the M535i was pretty intriguing, blending ’70s wood with ’80s plastic, but the build quality was undeniable – and the seats were incredible. 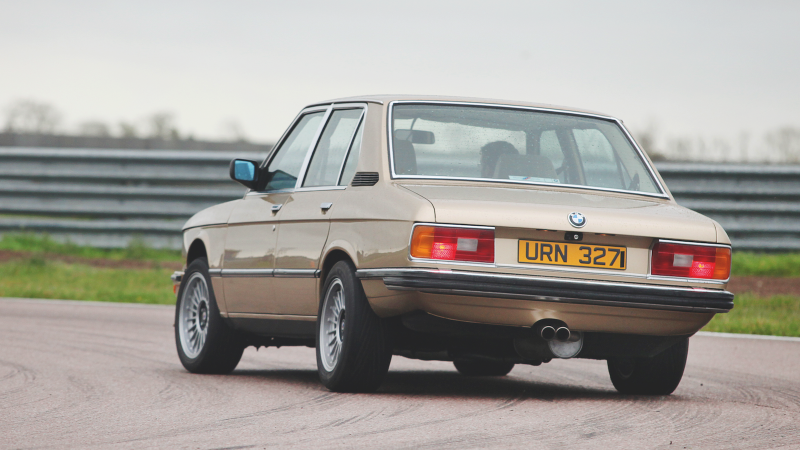 On the move, steering feel was on another level. Roll was more prominent than with later cars but handling was smart and throttle response instant.

As for the motor, if straight-line performance felt lacking, that’s only because the later M-cars were so blistering: the M535i still stormed to 60mph in just over 7 seconds. 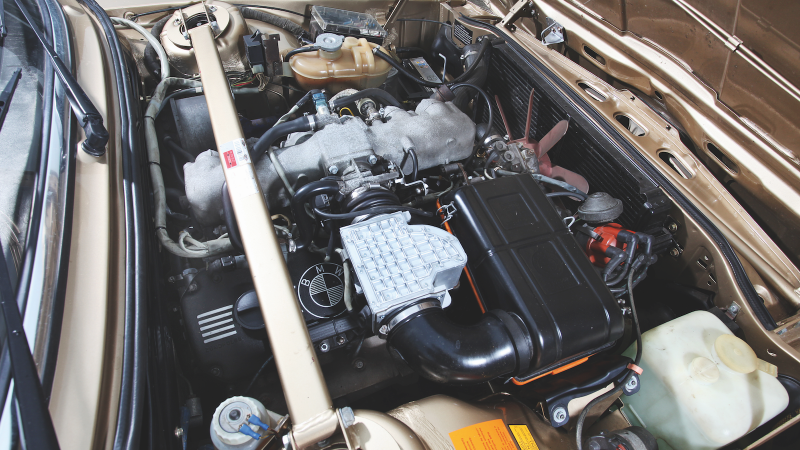 Unrivalled in its niche

Costing 3000 more than the 528i when new, the M535i sat in the same price bracket as the considerably slower Mercedes 280SE and much higher up the scale than the Ford Granada 2.8i – supposedly a contemporary competitor but, with hindsight, not even close.

As Autocar put it, ‘If performance be your main criteria then the M535i stands alone and unequalled.’ 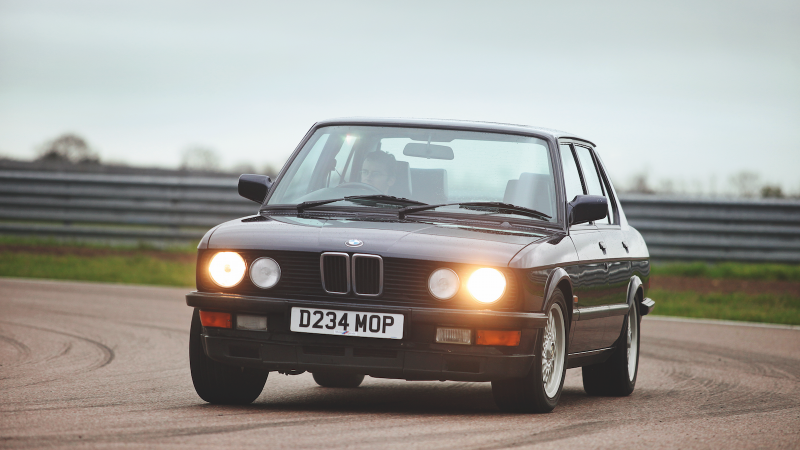 No homologation model, it was built simply to show what the German maker could do – namely, create one of the best sports saloons of all time. Not that you’d know from looking at it. 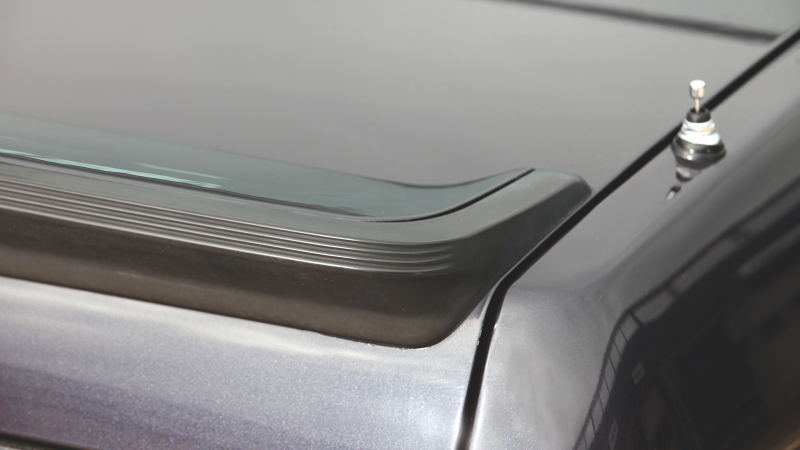 Design-wise, it was a long way from your average ’80s performance machine – the Sierra Cosworth, for instance, was all boxy body kit and aero madness, whereas the E28 M5 looked essentially like a standard saloon.

Sure, it was more aggressive than the standard E12 had been, thanks to black trim, subtle side skirts and a rear spoiler – but it was the antithesis of the in-your-face Ford. 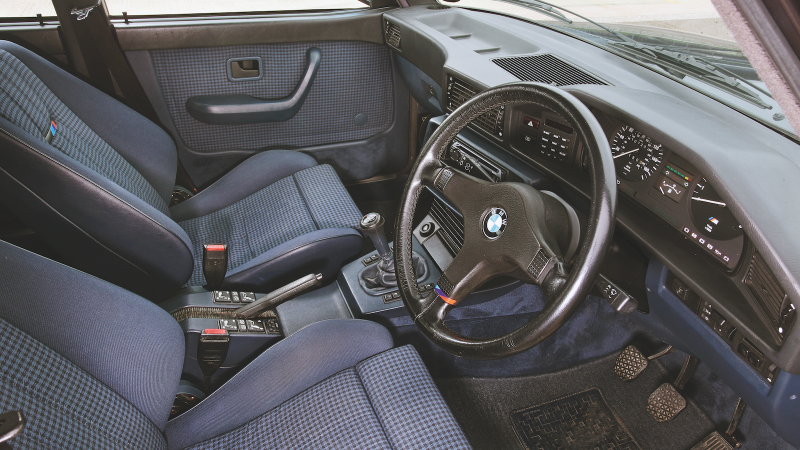 Performance for the top end

That’s because the Beemer was aimed at different buyers. More than twice the price of the Sierra – around 80k in today’s money – it was pure quality, with an interior reminiscent of the E12, marginally more luxurious and with more toys – including a trip computer. 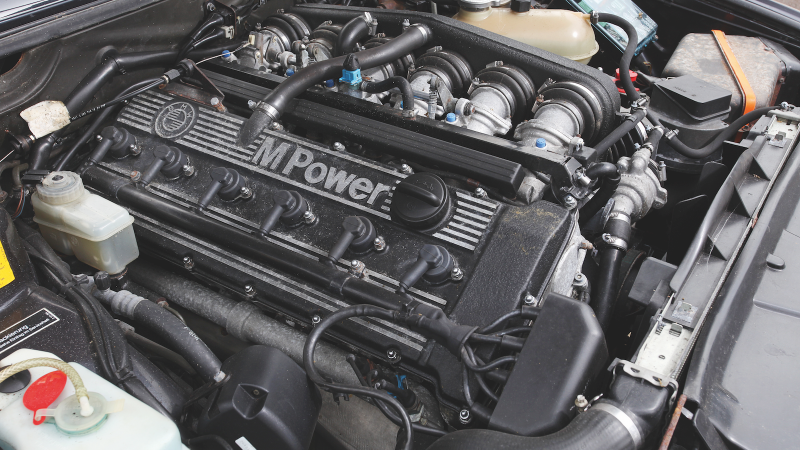 It also sported a more streamlined shell in the name of fuel economy and weighed around 100kg less than the previous M-car.

Which is important when you learn which engine BMW dropped into the E28 M5: a six-cylinder number derived from the M1 that, with Bosch injection, delivered 286bhp.

The result? A beautifully poised machine that turned in crisply, rode firmly and was perhaps one of the easiest cars ever to get sideways – though it drifted rather than snapped, thanks to sublime steering.

As it surged towards the redline, the smooth twin-cam motor would make glorious sounds, offering performance that was immense without being intimidating. 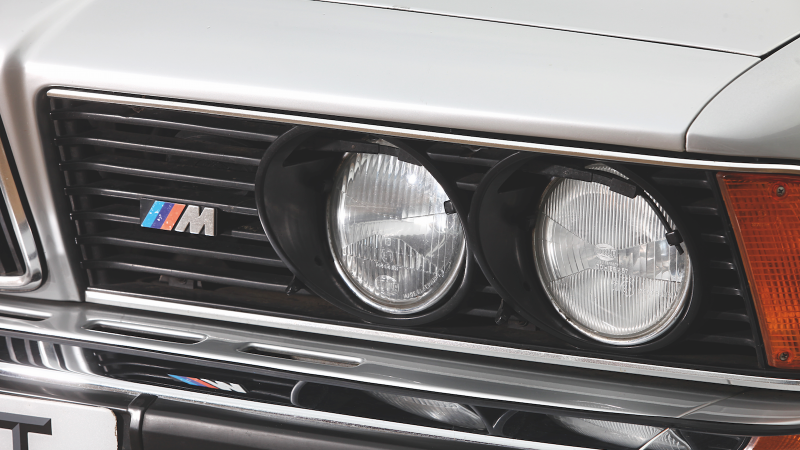 Whereas the E28 M5 scored more highly than later M5 models by striking the perfect balance between speed and usability, the next M car added style into the equation.

Though the 6 Series had arrived in 1976, it didn’t get an ‘M’ version for the best part of a decade – largely because the existing E24 635CSi model was already a popular flagship with an enviable motorsport record. When Munich finally did make an M version – the M635CSi – in 1983, it was a large two-door coup, with sleek styling that disguised what was by all accounts a bulky vehicle.

And, much like the M535i before it, it was a long way from ostentatious, with little to suggest it wasn’t simply an everyday 635CSi. You have to assume that BMW viewed with disdain those who liked a whale-tail on their wagon. 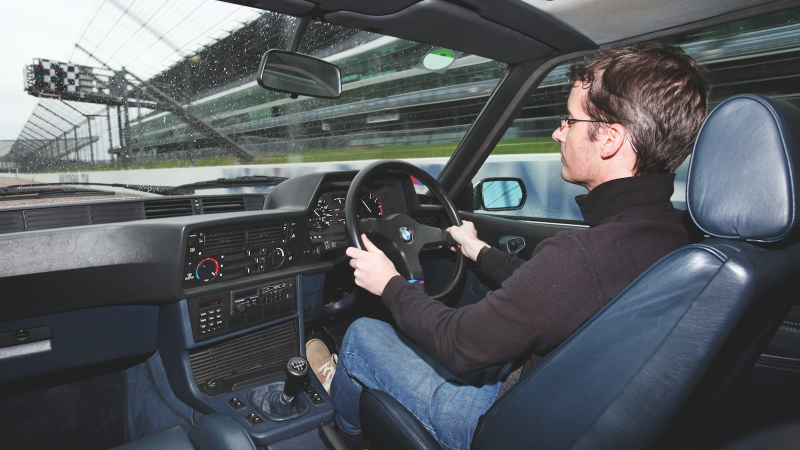 Perhaps the biggest difference with the E24 M635CSi was the rear seats – this was not an M-car in which your whole family could experience the fun of an opposite-lock exit from a Milton Keynes roundabout. Rather, it was the choice for the well-heeled couple looking to escape for the weekend in comfort.

While it lacked the last ounce of finesse demonstrated by the M5, it was still a fine machine – and one rivalled only by the Porsche 928 in period. 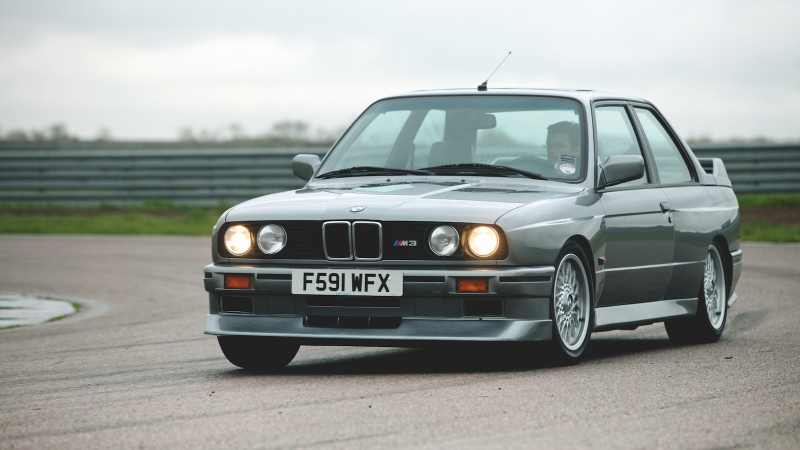 Now, to the last of our machines – the most direct descendent of the M1 and the only one built so that BMW could go racing: the E30 M3.

Fitted with a four-pot block because engine guru Paul Rosche argued the ‘six’ would be too big and heavy, the M3 appeared in 1985 with a 2.3-litre motor good for 192bhp. 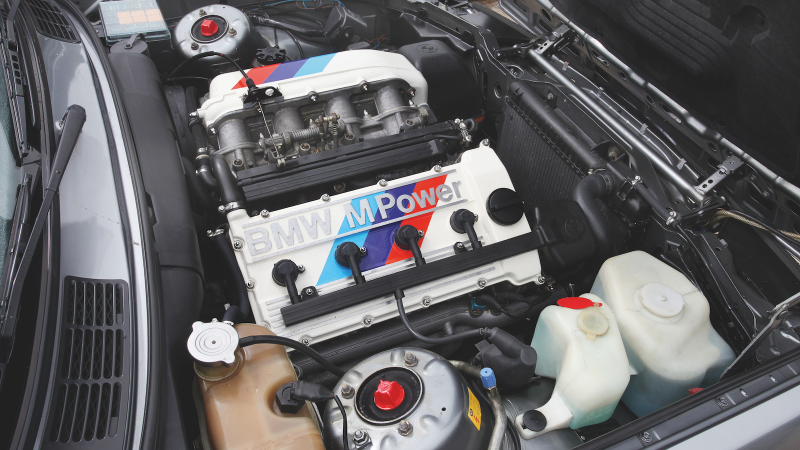 Yet there was a definite sense of disappointment when you planted the throttle: for a supposed racer, it didn’t have the instant surge of the six-cylinder cars.

At least, until you got to 5000rpm. At that point, the engine underwent a transformation in terms of both noise and shove. Suddenly the M3 felt like the little saloon car racer it really was. 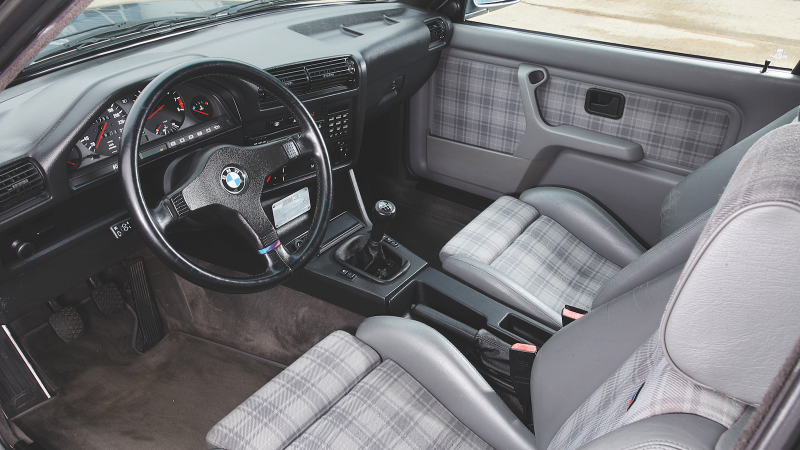 It cornered flat with bags of grip, through it snapped with more aggression than any of the others – and you’d always arrive at your destination with wider eyes and whiter knuckles than in the M5. That focused nature was always the M3’s main appeal. 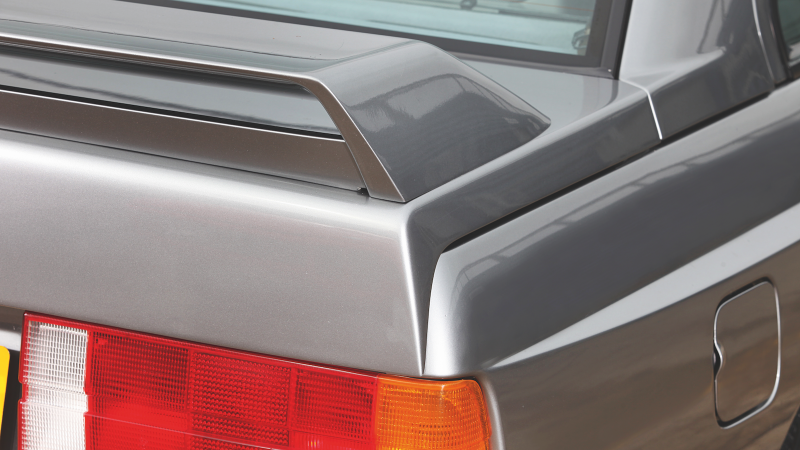 The continuous demands of motorsport meant a development arrived in 1987 in the shape of the Evo, which carried aerodynamic improvements, including a front spoiler and double-element rear wing.

The Evo II brought a hike to 220bhp, additional spoilers and an extra lip on the rear wing before, in 1989, a batch of 600 Sport Evolution models arrived, equipped with 2.5-litre 238bhp engines and adjustable spoilers.

It was all worth it: in 1987 Roberto Ravaglia won the World Touring Car Championship drivers’ crown in an M3. 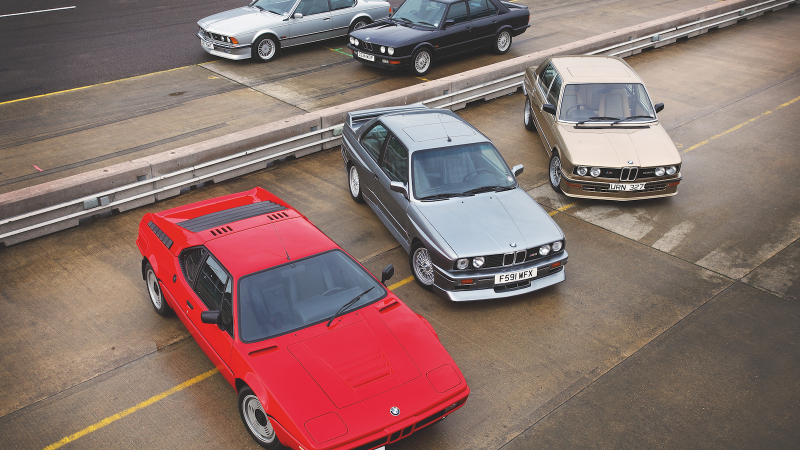 Alas, in the years that followed, the M badge was seen on more road cars and fewer racers. New regulations spelled the end of the M3 in saloon car racing and, with BMW long-since out of F1, the ties between motorsport and BMW’s most fabled machines faded.

But the legacy of that first generation – when a small ‘M’ meant everything – lives on.