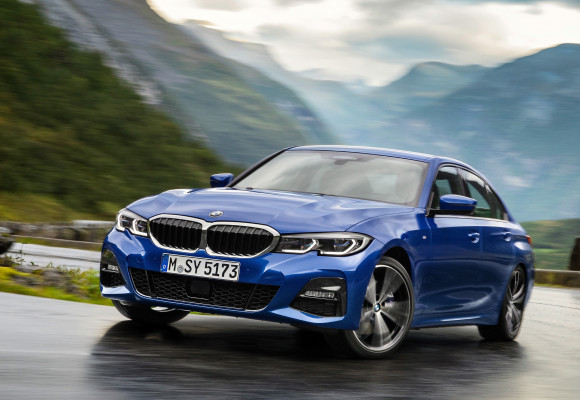 BMW chose the week leading up to the Paris Motor Show to launch their 7th generation 3 Series, the all-new G20 model, which then took centre stage on the BMW stand at the Paris show. The 3 Series is still BMWs most important model. Although sales aren’t quite as large these days, due mostly to the plethora of niche models the company now produces, but it still sells in big numbers and is the yardstick that most of their competitors and the motoring press alike, use as a benchmark. And therein lies the problem. For decades, BMWs 3 Series has been the king of premium sport saloons. With its near-perfect blend of comfort and handling dynamics, the 3 Series has always been the go-to car in class. Unfortunately, its charms have been fading with this most recent generation, the F30. While not a bad car, the F30 3 Series has seemingly began its descent from its throne, as it became a bit softer and more well-rounded, while the competition became sharper and more dynamic.

So the all-new G20 has a huge amount to live up to, and visually it doesn’t disappoint, the car looking sharp, dynamic and sporty across the range, not just in the M Sport models, which is a huge plus. BMW has poured a huge amount of resource into the G20. Its new chassis, using the CLAR architecture as used on the F90 M5, makes it lighter, more rigid and more dynamic than its predecessor. The new chassis increases the new 3 Series in size in every important dimension. The new 3er is 76mm longer, the wheelbase is 41mm longer and 16mm wider; the height remains virtually the same to maintain a low centre of gravity and the G20 has perfect 50/50 weight distribution. Overall, body rigidity is increased by 25% over the F30, and the drag coefficient of the G20 has been reduced from 0.26 to an impressive 0.23.

What is also interesting, is that according to BMW’s press release, the new G20 is 16mm wider but the actual wheel-track has been widened by 43mm and 21mm, front to rear, respectively. Weight has also been reduced by 55kgs – the body-in-white is around 20kgs lighter than the F30’s and the front springs, struts and engine subframe of the G20 are now also made of aluminium. This alone helps reduces the weight of the body structure by 7.5kgs compared with the F30. A further 15kgs is saved by fitting an aluminium bonnet and front wings/side panels.

When you see the G20 in the metal, with its flared wheel arches, you can see that its track and stance seems quite wide for a standard 3 Series, looking almost like the F80 M3’s. So it should have much more grip than the F30 it replaces, along with sharper and more dynamic handling.

The G20 looks especially good viewed from the front; the kidney grilles merge in the middle, something that bothers many purists, but we actually think it looks quite good when paired with the funky headlights, making the car look very dynamic and sporty. Viewed side-on and the car looks quite lithe and sporting, and at the rear BMW have got the styling spot-on, with the coolest tail lights split in two colours, red and white for the turn signals. The turn signals now run the full length of the L-shape lens, which help to give the rear a wide and low profile. Hand on heart we can honestly say that this is the most attractive, all-round design BMW has produced in a long time. Some releases have looked good from certain angles, but the G20 hits the mark from every angle. Some reports have said that the G20’s styling is too fussy, and of course, others have since jumped on the bandwagon, but we think the car looks distinctive, sporty and attractive, and most importantly, like a BMW. And as we went to press, Car magazine had just completed their first drive of the G20 and proclaimed it to be “The first perfect 3 Series” – high praise indeed from a well-respected publication…

Moving inside, the G20 looks equally as good here, although the handbrake has been replaced with an electronic parking brake – the purists will hate that! The dash is clean and classy looking, and runs down in a kind of a waterfall effect from the iDrive screen to the centre console, almost all of it trimmed in carbon fibre, aluminium or wood – the choice is yours. Those materials also pervade across and around the climate controls and across the dash, plus polished alloy buttons abound along with polished aluminium rollers for the air vents, giving the interior a more luxurious, hewn from granite design that is both clean and stylish, and far better looking than the current F30 interior.

The new digital instrument panel, paired with the digital iDrive screen, dubbed BMW Live Cockpit, is sharp looking and it needed to be; it gives the 3 Series a very high-tech feel.

Dynamically, BMW has fitted the new 3 Series with lift-related shock absorbers across the range. In a nutshell, they control the damping of the shockers relative to the road surface and can adjust to minor bumps and major bumps appropriately. Their damping rate is continuously variable and they adjust firmness progressively, according to spring travel, keeping the body flatter and more stable. This helps to make the G20 3 Series ride more comfortably and smoother over poorly maintained road surfaces. These new trick dampers can come in either regular or M Sport spec, though they’re non-adjustable. If you want to be able to select your damper settings (Comfort, Sport or Sport+), don’t get the lift-related dampers! Our suggestion would be to try both systems to see how well these lift-related shockers actually work; they sound almost Alpina like in their ride characteristics, but Alpina manage this without resorting to ‘lift-related’ shock absorbers…

BMW put a lot of work into the chassis and suspension to make sure that the G20 has an even better balance of sport and comfort that it has enjoyed in the past.

The new 3er is equipped as standard with Servotronic power steering but upgrading to M Sport or Adaptive M Sport suspension gets you a variable-ratio sport steering setup. While BMW’s variable steering racks have been maligned in the past, we’ve heard great things about this new setup, giving the G20 very direct and ultra-sharp steering. 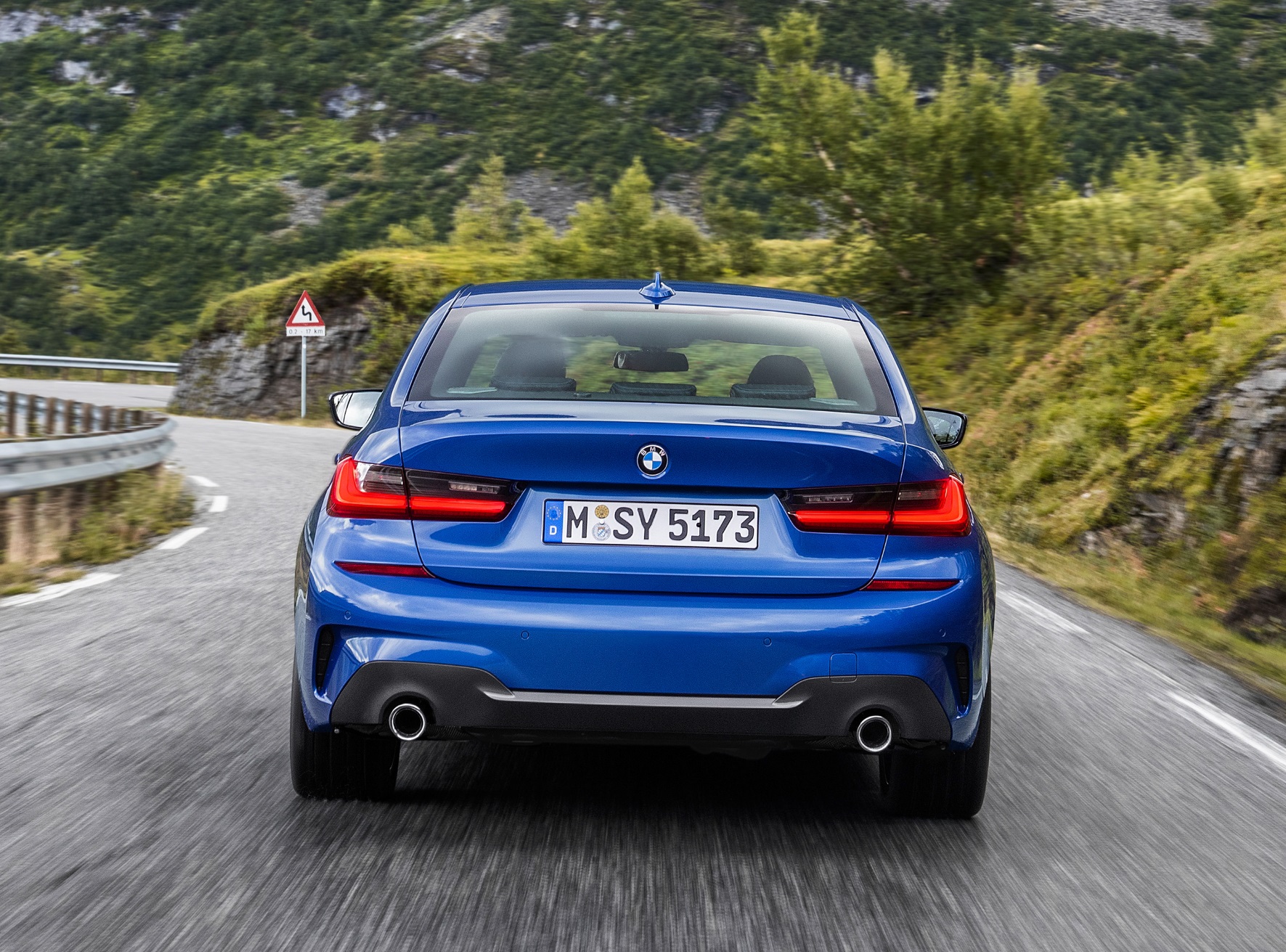 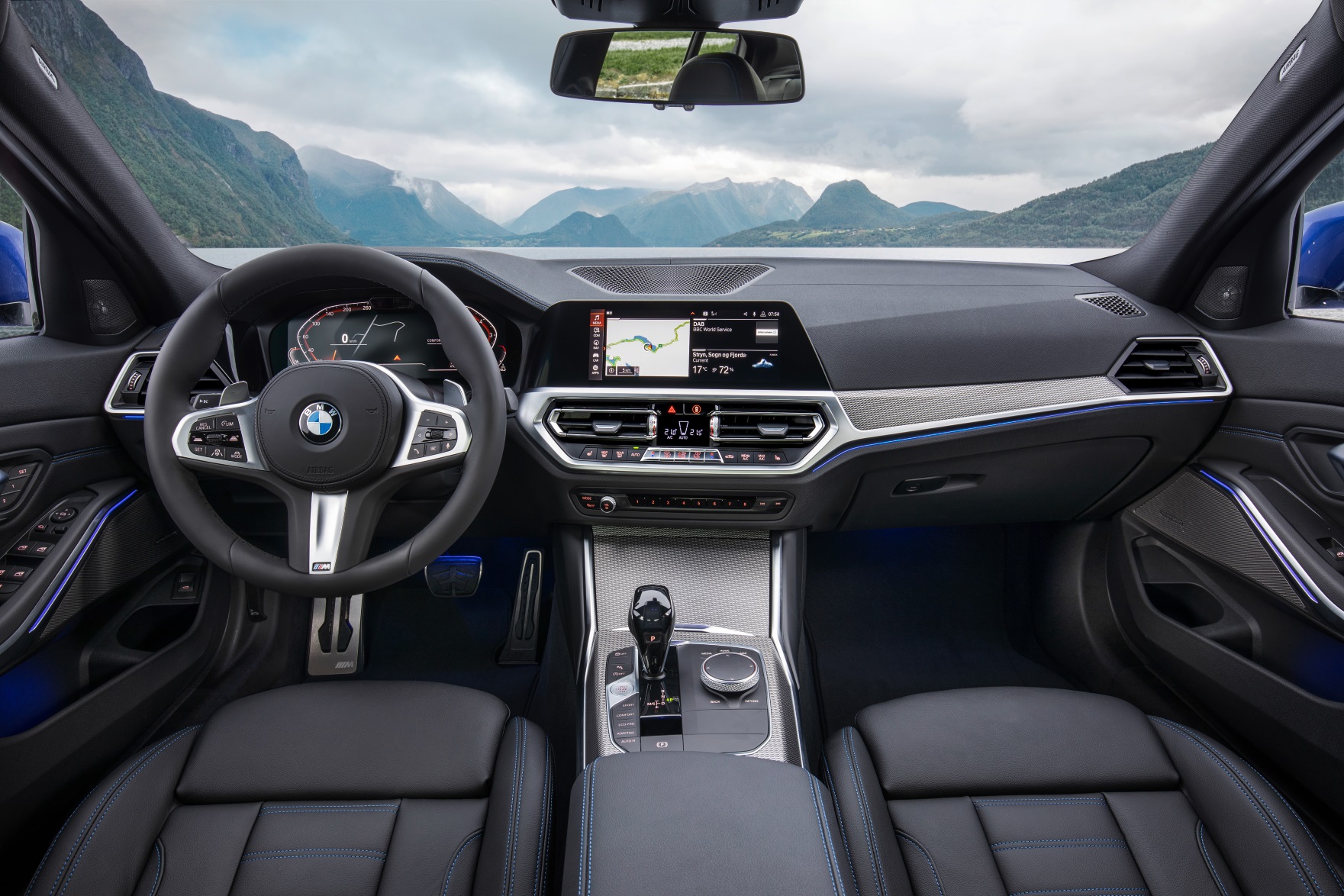 BMW updates the i3

BMW previously carried out a Life Cycle Impulse or LCI, only12 months ago, so this latest update is all about the new battery they have installed. The mid-life LCI model was given a 94Ah/114 mile battery upgrade, but with competitors biting at their ankles with their own electric models, BMW have upgraded the i3 again by installing a 120Ah battery, giving a range of 153 miles. The new, more powerful battery will be fitted to all i3’s, including the i3S, but at the same time BMW announced that the Range Extender (i3Rex) models will be discontinued in Europe, although the Rex models will still be available in the US.

The new battery gives the i3 increased performance as well as greater range – the standard (170hp) i3 zips to 60mph in 7.3 seconds, while the i3S model, now with 184hp, hits the same speed in a brisk 6.9 seconds. 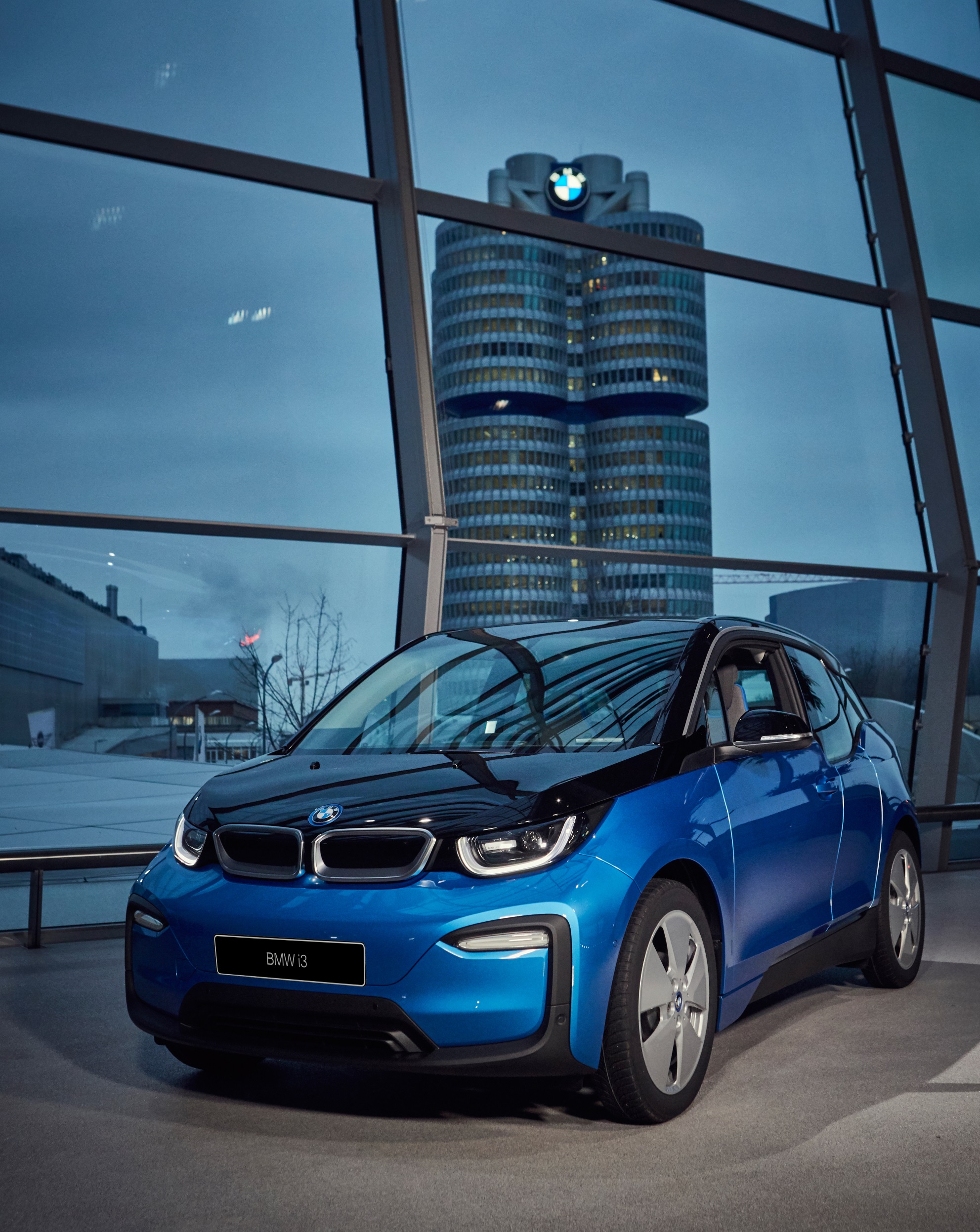 BMW has warned investors its 2018 revenues and profits will likely fall due to the costs of implementing new emissions standards in Europe and rising uncertainty stemming from the escalating global trade war. The revenue is now expected to fall slightly from the 88.6 billion euros it generated in 2017. BMW had also previously forecast profits to be on par with last year, but now expects a “moderate decrease.”

BMWs biggest concern is the continuing international trade conflict, which is aggravating the market situation and feeding uncertainty. The ‘trade war’ has distorted demand more than anticipated and has led to pricing pressure in several markets, notably China and the Far East.

We’ve all read about how fast, wieldy and fun to drive the new M2 Competition models is, but just how quick is BMW’s diminutive 2-door? BMWs tame test driver recently posted a rapid Nurburgring lap time of 7mins 50 seconds, beating it’s M2 brother by 6 seconds; to put this time into some kind of perspective, the Aston Martin V12 Vantage S clocked a time of 7mins 52secs, whilst a car from handling gods Lotus, the Exige S V6, complete with a supercharged 3.5 V6 engine, managed a time of 7mins 53secs!

Showing its pedigree straight out of the box in 2004, the E46 M3 CSL also lapped the ring in 7mins 50secs, and the CSL’s nearest and dearest ‘modern’ incarnation, the M4 GTS, covered a lap of the Grne Hlle in an astonishing 7mins 27secs!! 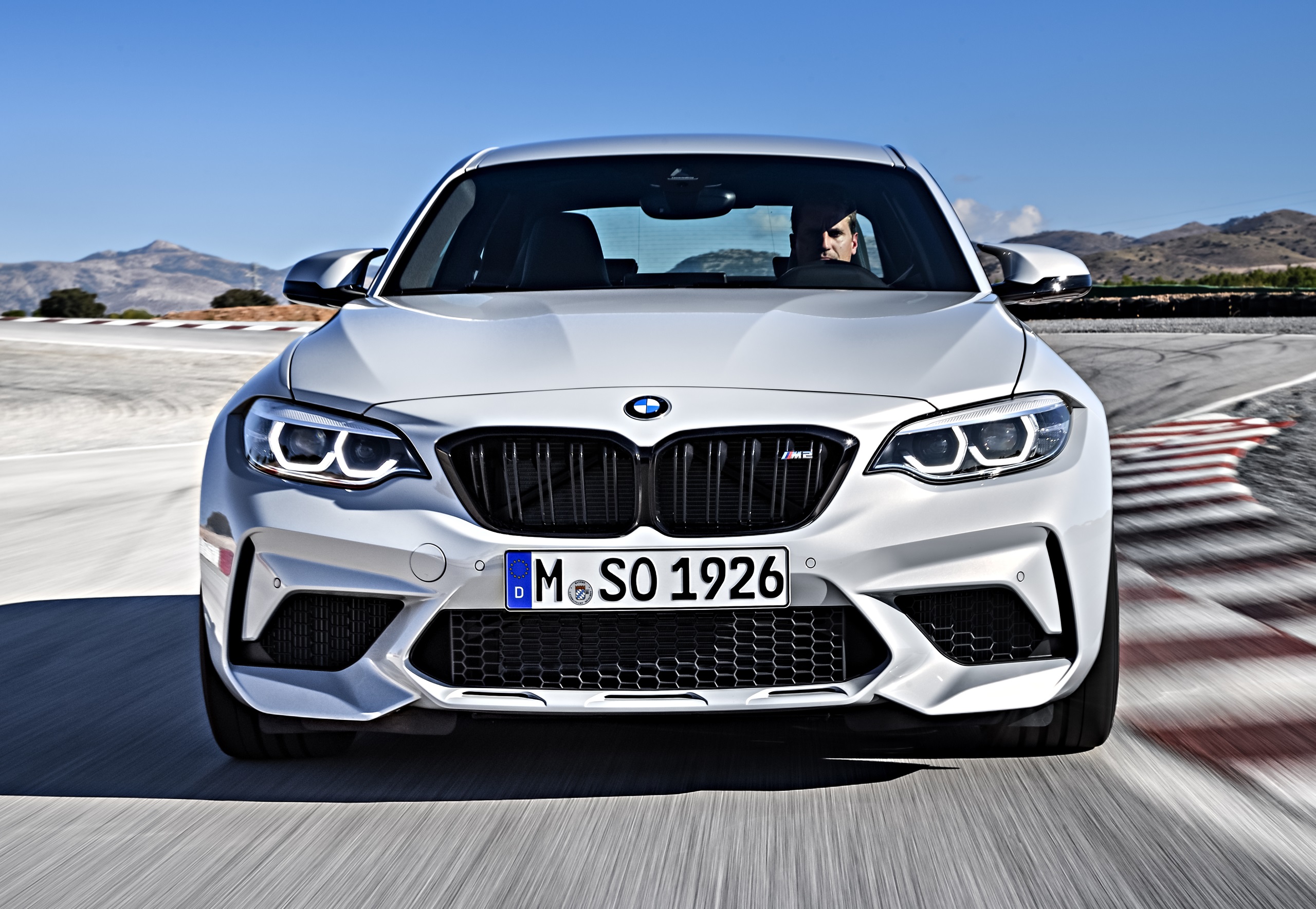 Schnitzer’s engineers are busily busting a gut adding the final tweaks to their range of goodies for the M2 Competition model, and the ‘M2C’ test ‘mule’ has been spotted out and about on the roads around their HQ at Aachen and at the Nurburgring, where the suspension mods are being tested to the max before being released to the public. Here are a couple of ‘spy’ photos of the Schnitzer M2C, which looks as though it is almost production ready. Expect news on the upgrades soon… 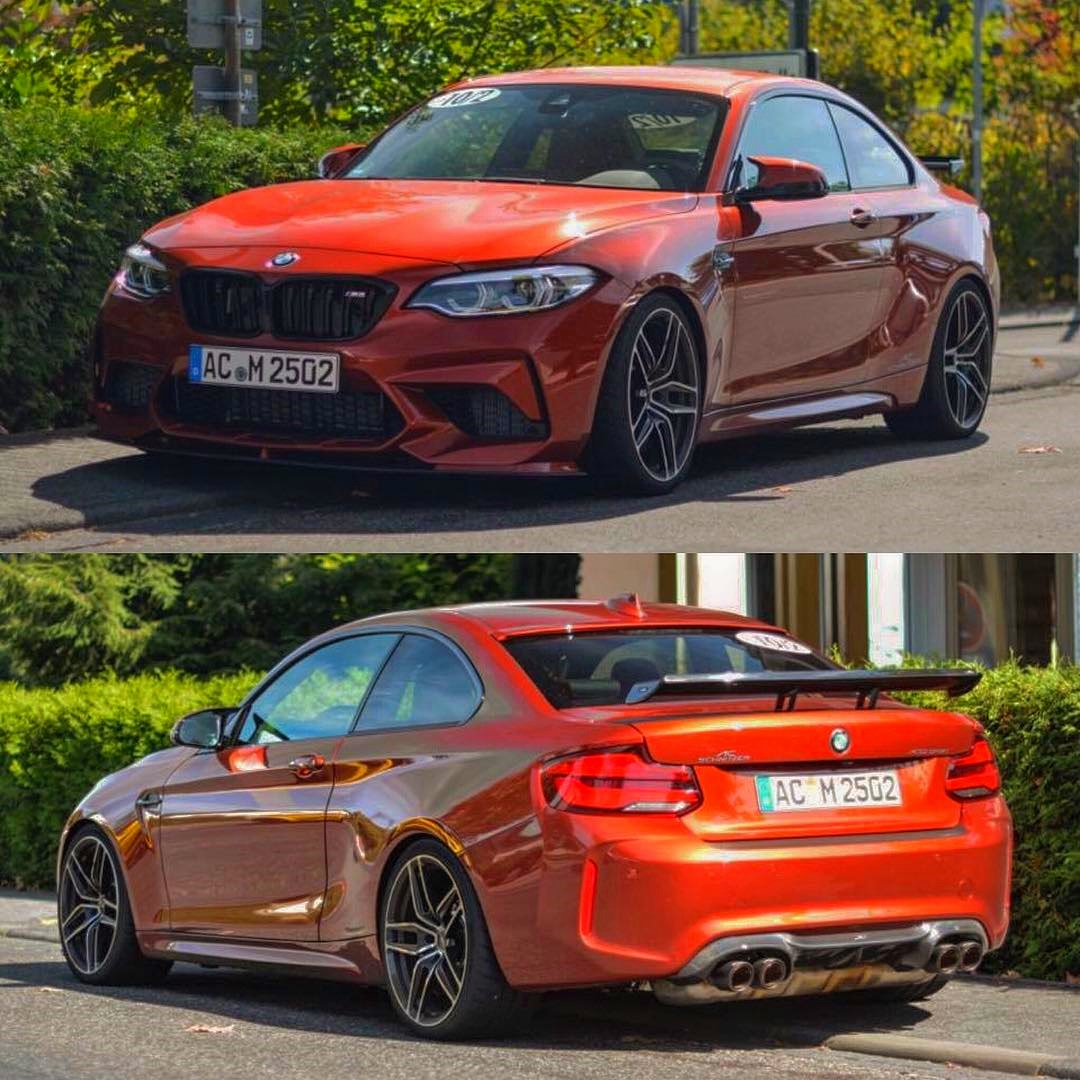