Can I tell you a secret? Swear you won’t tell anyone… 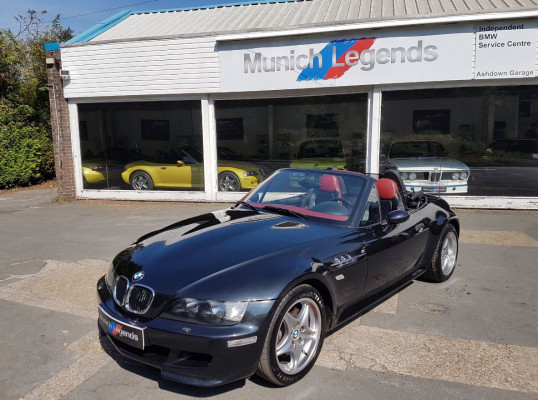 I’ve found out something new about myself – but please don’t tell anyone. I have – completely by chance – discovered the pleasure of two-seater, drop top motoring – hooligan style. So, it goes like this; customer brings his (Z3) M Roadster in to Munich Legends for us to sell on his behalf – a perfectly normal, weekly type occurrence – and we agree on a sale price and return price to him. We sell the car and pay the owner, but the car is too small for the buyer’s son (at six foot six inches) and he literally cannot drive the thing, which is a bit of a problem as it was a shared purchase. He shuffles, embarrassed, back in to the showroom and politely asks if we would take the car back and refund him the purchase price. We reluctantly agree in the interest of good relations and – lo and behold – we own an S50 Z M Roadster.

Now I’m going to be completely honest here – I’ve never been a fan. Its not the car’s fault – I’ll take full responsibility – the problem is my head. Or more accurately, my hair. Sitting in a Z Roadster has always made me look – how can I explain – a bit daft. My head pokes out above the screen (I am a mere six foot two), and as soon as we’re in motion the wind catches the old barnet as we head off down the road, and I start to resemble a poodle with its head out of the car window. I must have driven a bad one early on, because all I remember is a lacklustre engine, difficult gearbox and terrible scuttle shake. It was enough to put me off for a good few years, meaning that I never really repeated the experience, veering much more towards its sibling, the M Coupe. Anyway, I’d never really been a convertible sort of guy – in the UK its either too cold or too hot, or I can’t be bothered to turn the music down in built up areas, meaning I look like an attention seeking yob as I cruise down East Grinstead High St. It’s all a bit….inconvenient. And – whisper it – isn’t the Roadster a bit girlie?

It’s true that on paper the Z3M roadster looks like it could be a bit of an animal. Tiny little lightweight two-seater, powerful engine up front, rear wheel drive, no traction control. With 321 horses and few driver aids, enough dials to keep even the most demanding dialist happy, sporty seats conveniently located almost directly over the rear wheels for maximum feedback and a chassis that’s been breathed on by our friends over at BMW M, the little Roadster demanded another chance to prove itself. So I decided to oblige, and having bought a beanie, promptly commandeered the Z for a few weeks of carefree summer driving.

The first thing I did was go sideways. Then, I did it again. Luckily, the radio didn’t work, so I didn’t really have much else to distract me or cause any embarrassment. The little manual soft top roof unclips in a jiffy, and can be thrown back with one flick of the wrist, just adding to that jump-in-and-drive feel. Having dropped the top, and after another few moments spent reading all the dials, I was ready to go sideways again, but this time with the roof down. And, Ladies and Gentlemen, I can officially tell you – the M Roadster is a proper hoot. No other BMW from that generation – or since – wants to go sideways with such gay abandon. Soon, just for fun, you fall into the habit of pulling out of every turning with just a little too much throttle, combined with a little too much lock, so the rear wheels break traction in a nice wiggle – a dash of counter steer and you steam off down the road in perfect getaway car style. You can just hear the tuts from the neighbours – which of course makes you want to do it all the more.

Out on the highway the Z has plenty of zip, lots of overtaking power, and a decent-ish level of grip. I’m not sure quite how effective emergency breaking would be at speed – the front end can seem light once you get going, and the car eggs you on to drive at what may well be a little over the limit of the chassis, but in true hooligan style, I ignore these tedious worries and focus more on burying the throttle. After a few days of this brilliantly senseless fun, I have almost fallen victim to one of the golden ‘do nots’ of selling cars. Do not fall in love. It is stock, remember, and not ‘mine’. I tell myself; there is no boot. No rear seats. I don’t like rag tops. I am too old to go sideways everywhere. I don’t have space for any more cars. I don’t like the little boot rack and custom Z3 luggage that clips nicely on. OK, that last bit is a lie, because it is really cute. But I really need to grow up.

Luckily a customer comes and saves the day. He heard that the car is available again and would like to come to our yearly meet ‘Legends in the Fall’ on 5th September to check the car over and, almost certainly, drive it home, because he missed out last time. I look at the calendar, and as luck would have it, realise I’m on leave until the day before. This means I can sell the car – no more guilt – but still spend the last days of summer going sideways out of turnings.

So, if you’re driving round Sussex minding your own business and you happen to see a middle aged man wearing a beanie, driving a Z Roadster sideways down the road, a five mile smile stretched across his face, that’s probably me. Just please, don’t tell anyone. It can be our secret….