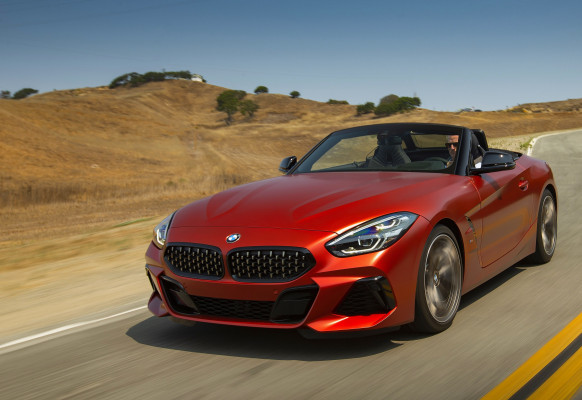 BMW revealed the all-new Z4 to the world at the Pebble Beach Concours d’Elegance during Monterey Car Week in August. The model on display at the launch was the top of the range M40i Roadster ‘First Edition’ finished in Frozen Orange Metallic with an anthracite electrically operated hood and a Vernasca black leather interior. The M40i boasts an updated version of the 3.0-litre twin-turbo inline 6-cylinder engine producing 340hp, enough to propel the Zed to 60mph in 4.5 seconds (approx), brisk but not earth-shatteringly quick in this segment.

One controversial aspect of the design is the BMW kidney grille sporting a mesh design; it seems at odds with the car’s styling and will take some getting acclimatised to by BMW aficionados and customers alike, used to the traditional vertical bars in BMWs kidney-grilles…

Initial comments from the motoring press haven’t been overly kind, finding the design underwhelming, with many comparing the Z4’s styling to that of a Fiat 124 Spider, whilst others have likened it to a Mazda MX5 and Honda’s S2000; I must admit that the overall shape and grill opening does bear more than a passing resemblance to the 124’s…

Full Z4 model details and specifications will be announced shortly; Although BMW displayed the M40i model at the Pebble Beach unveil, according to BMW, the first Z4 available at launch in Spring 2019 will be the 30i model, with the Z4 M40i (including the First Edition) arriving in the Second Quarter. 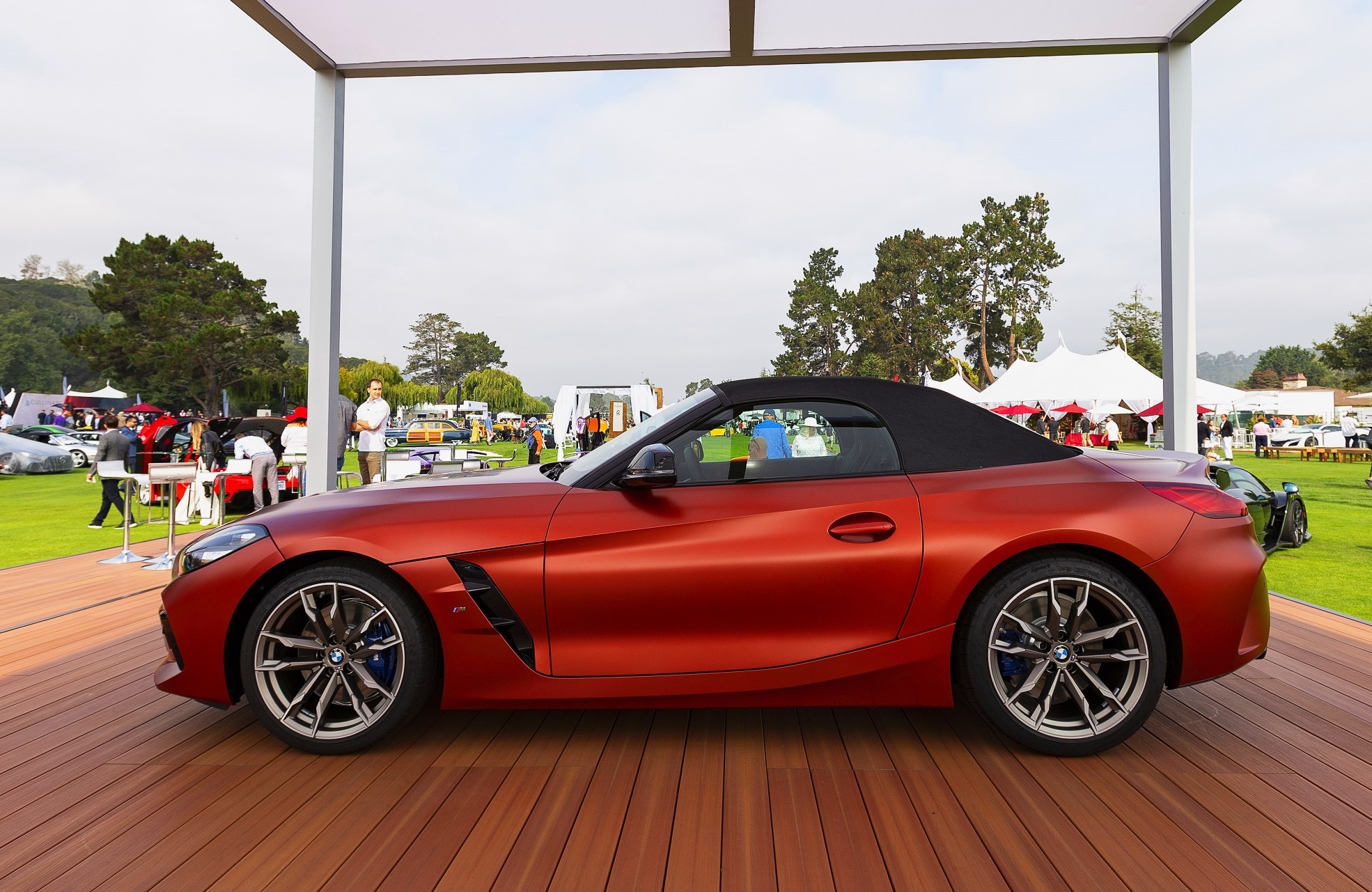 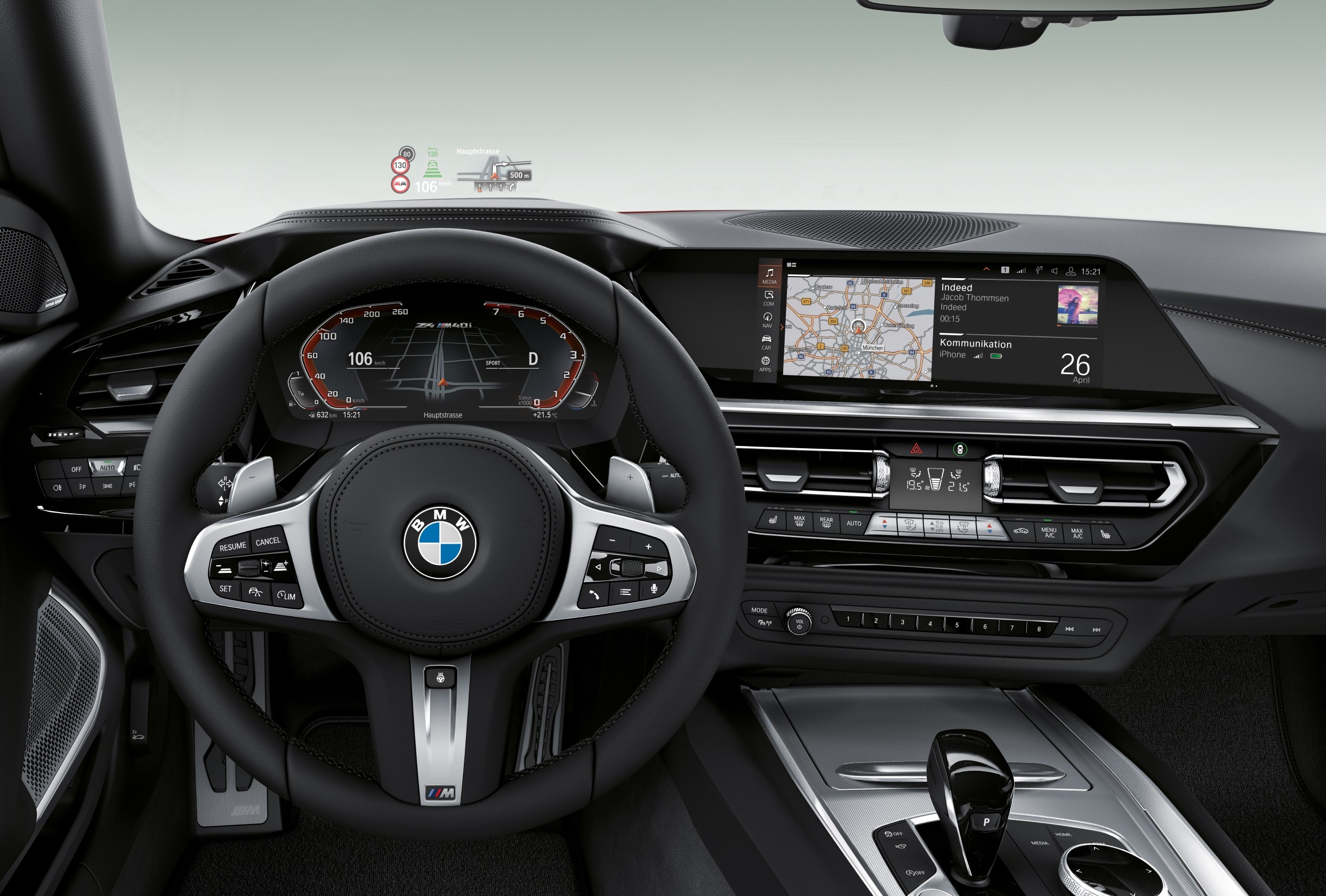 The company has been fined 10 million for software ‘mistake’

According to reports coming out of Germany, BMW has neither cheated nor tampered with the cleaning of exhaust gases, but only made a mistake with the software installation in 7600 vehicles. To settle things without a lawsuit, BMW will have to pay a ten million euros fine. As reported in last month’s BMW News, prosecutors in Munich have been investigating BMW on suspicion that the company had manipulated the emission control of diesel vehicles and cheated car buyers. No manager or executive of the Munich-based automaker has been accused. And it will probably stay that way.

The investigation states that BMW accidentally installed the wrong software in about 7600 vehicles – models such as the M550d and 750d. The basis for the fine would be the law on administrative offence, because the BMW Group has violated its supervisory duties (sloppy work, basically) by uploading the wrong software in these vehicles. The software ‘at fault’ was intended for the X5 & X6 M50d models only with the same engine but ended up being fitted in the M550d and 750d models as well by mistake, which is why the exhaust gas cleaning was found to be tuned for a different engine/model configuration. Importantly, the ‘wrong’ software had no advantages in practice or on the test bench, which made deliberate manipulation seem less plausible from the start.

BMW has come out of the dieselgate scandal pretty unscathed; if not smelling of roses it could be said that the ‘doo-doo’ definitely hasn’t stuck to the Bavarian car maker – BMW’s penalty is tiny compared to the fines other automakers have endured for their emissions-related scandals. VW Group has paid approx.. $25 billion in fines in the U.S. and Germany, Daimler is anticipating billions in fines, and Audi CEO Rupert Stadler is currently in jail. Both VW and Daimler have had to recall hundreds of thousands of cars with diesel-defeat devices.

While BMW’s share price dropped by 6% in the first half of this year, the price of VW and Daimler shares dropped 13% and 19%, respectively.

It is still unclear whether the BMW Group agrees to the fine of 10 million or would prefer to have it brought to court. The prosecution would have to prove that the oversight was a ‘sanctionable’ violation of its supervisory duties. 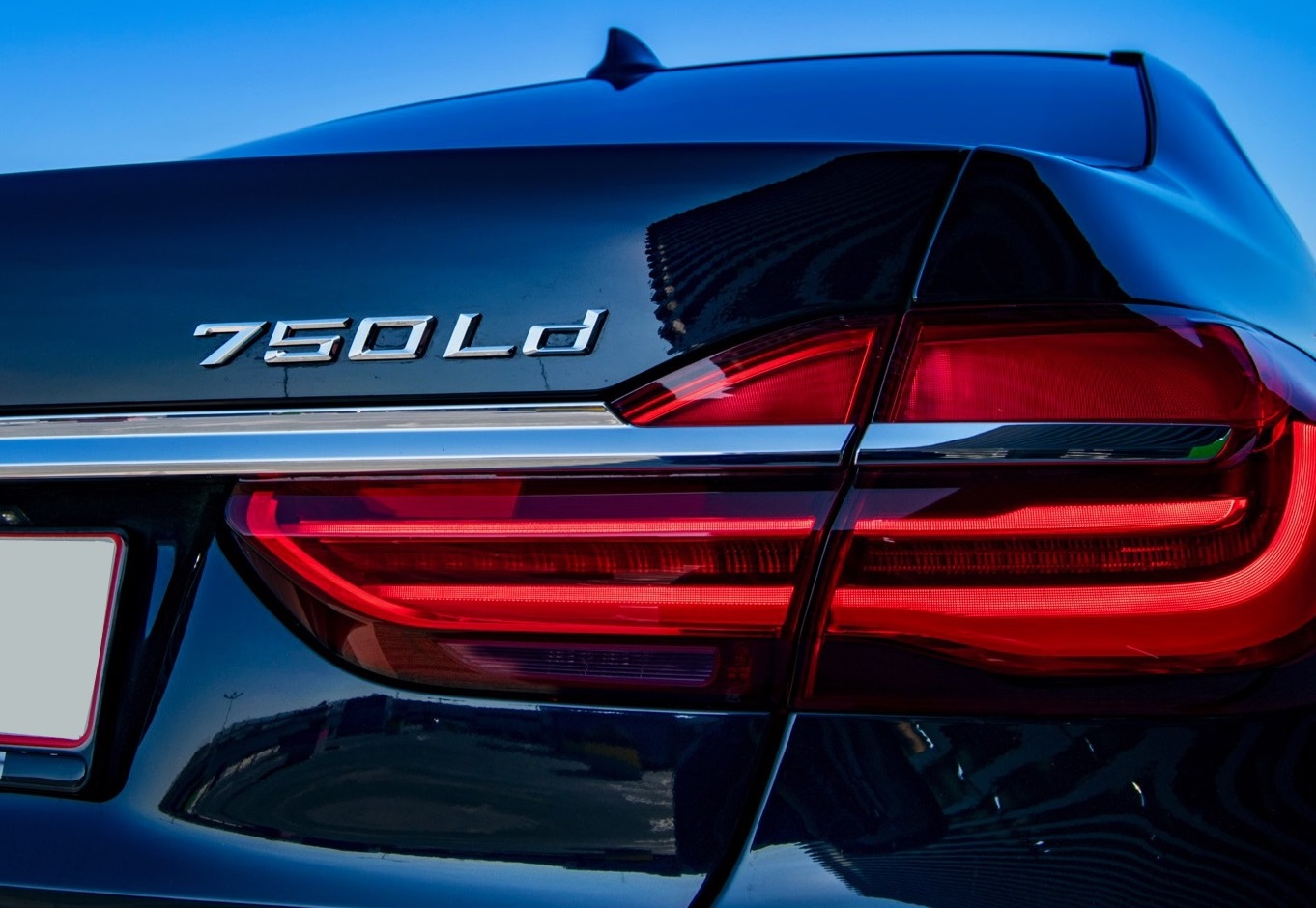 Crack BMW tuners AC Schnitzer have smashed the Nurburgring Nordschleife lap record for an F90 M5. Piloted by BMW racing legend Jrg Mller, the Schnitzer modified M5 lapped the ‘ring in 7:29.50 mins, 9 seconds quicker than BMWs official time for the F90 M5. Unfortunately for both Schnitzer and Mller, the track was wet when the run took place, otherwise the time would have been quicker still; Jrg added “I had to lift in quite a few areas where I would normally have the pedal to the metal!”

To achieve the record, Schnitzer’s F90 M5 has seen its power output tweaked to 700hp/850Nm of torque, mostly achieved by remapping the ECU and the fitment of an AC Schnitzer sports exhaust. The standard BMW M suspension has also been swapped for KW’s V4 multi-adjustable coilover set-up. The M5 also has a full range of carbon fibre aero goodies fitted and ran on 10×21″ (all round) Schnitzer BiColor Type VIII lightweight forged wheels with 275+285/30/21″ tyres.

All Schnitzer’s performance upgrades are backed by a bespoke 3-year warranty. 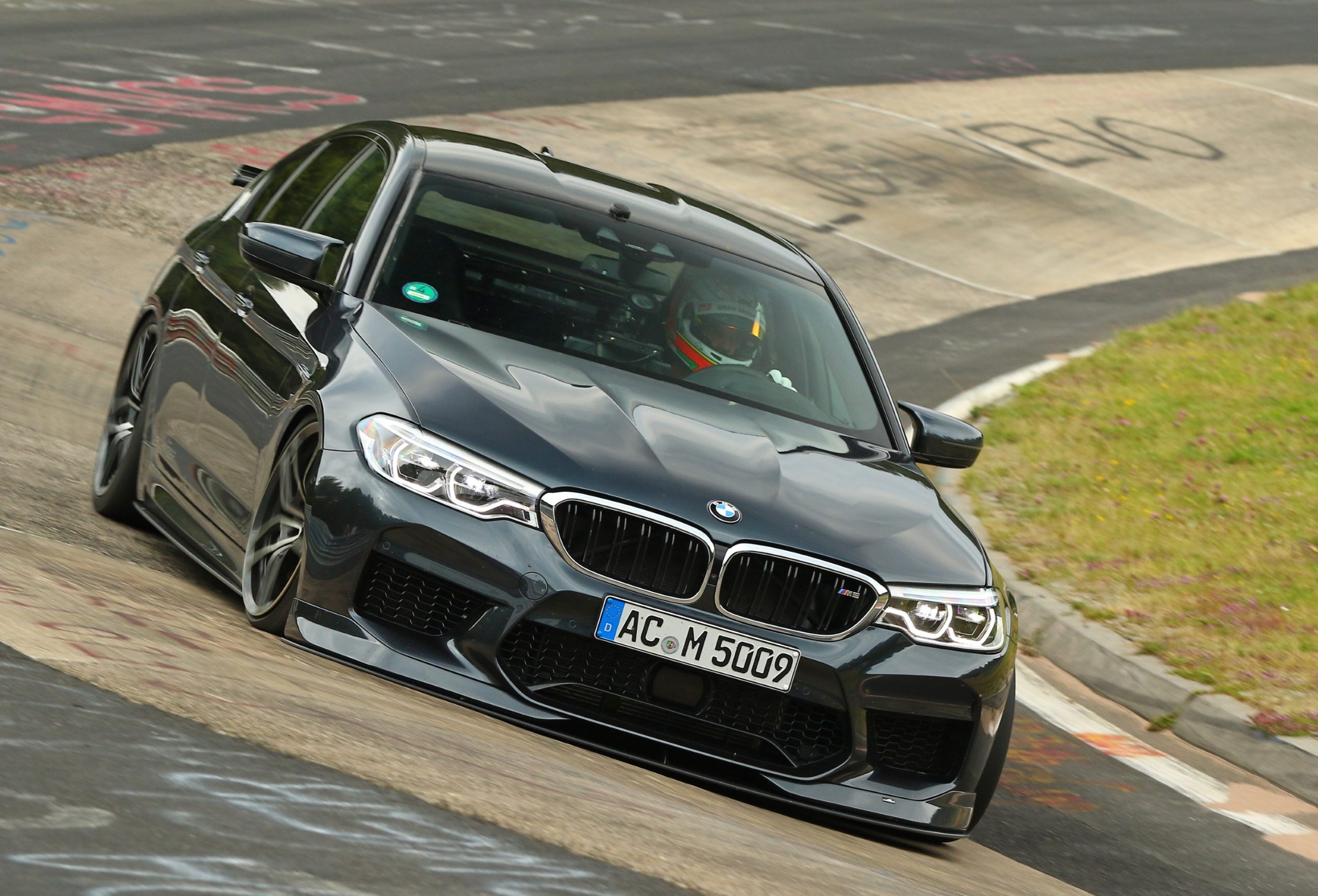