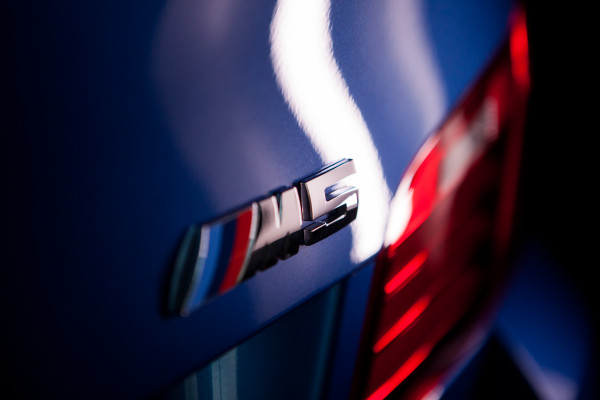 What would you do if someone lent you an F10 M5?

That was the question I asked my friends, family, cats, alpacas (yes alpacas) and just about anyone who would listen to me.

Something I’d started in jest had actually turned into something feasible and to my surprise (some of) the answers were really good. Maybe I should just spend the whole test trying them out.

“Never give it back.” Paul Murphy.

“Trip up north, late at night, so there’s not much traffic.” Anthony Mason.

“Put an M Performance exhaust on it.” Gary Jackson.

“Are there any rapeseed fields near you?” Chris Teagles.

And one of my favourites, simply, “Go ASDA!” Barry Bennett.

Naturally though, I had a few of my own to throw into the mix so when Specialist Cars Stevenage called to confirm the loan I was all set to go. First up, wash it. I know. I know. Who does that? But to truly appreciate the aesthetics, the imperfections and of course, which type of Rastafarian Old Holborn the design team were smoking when they put pen to Wacom tablet, you have to get out there and hand wash it. 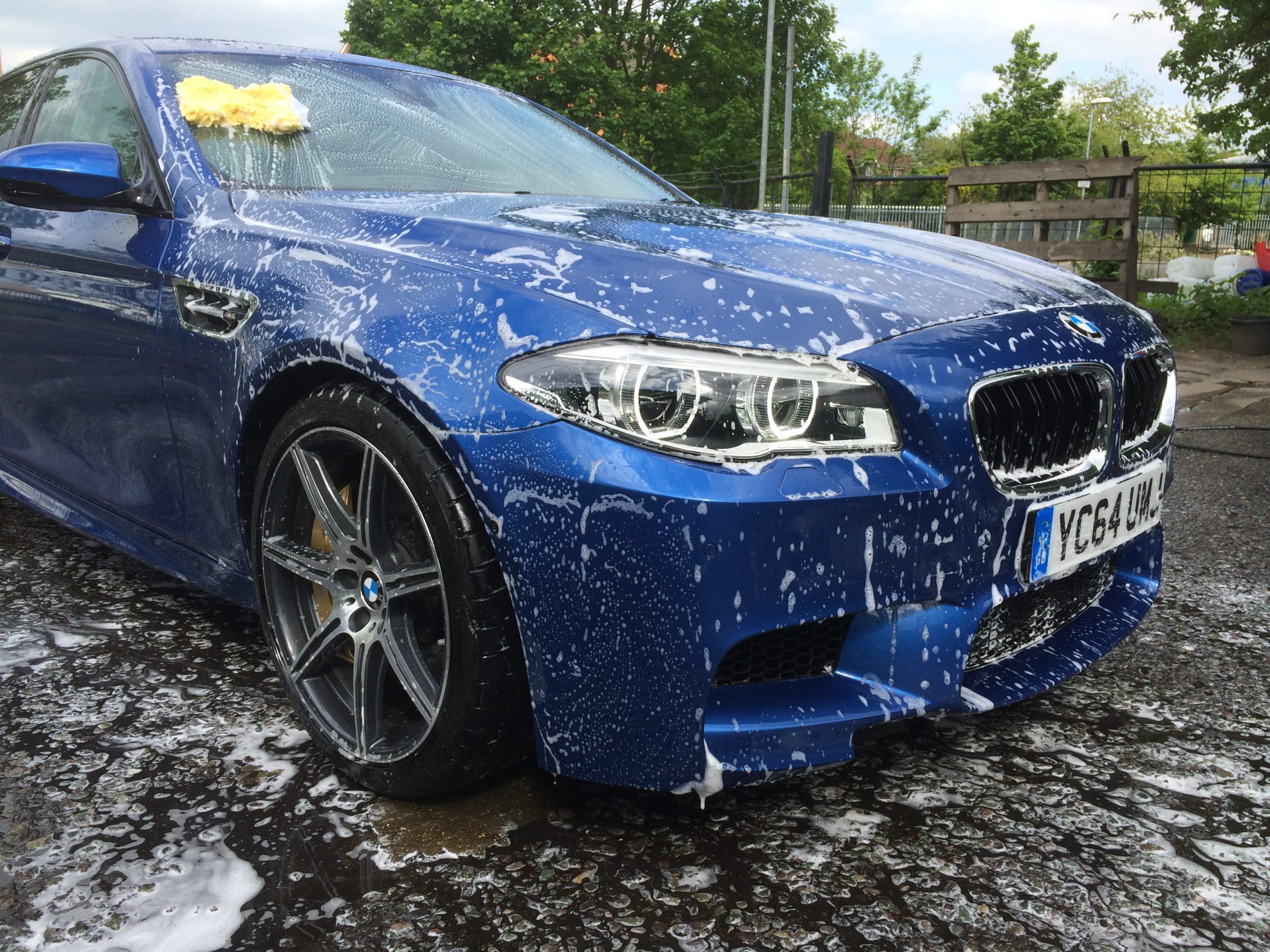 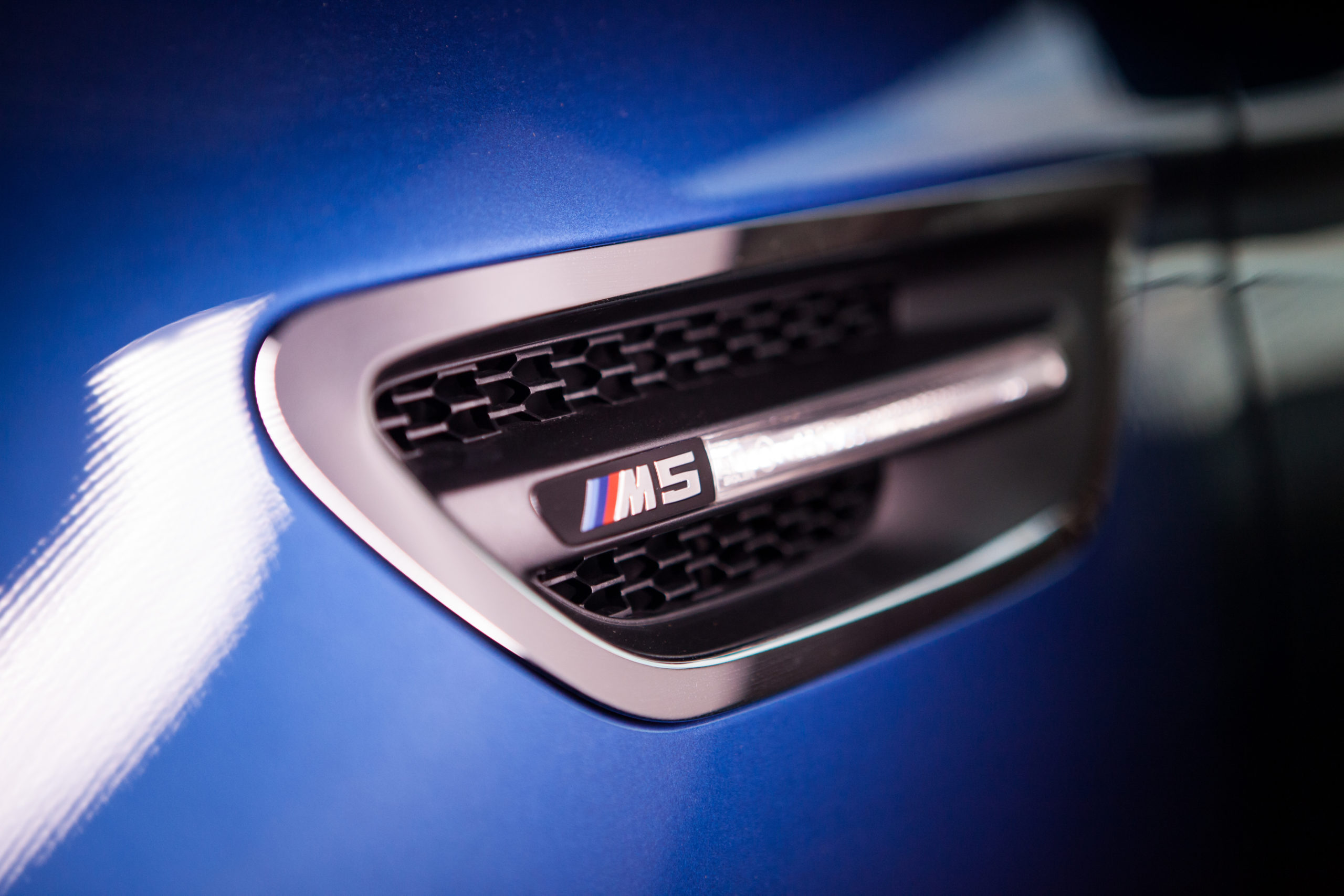 Anyway, as its 74,000 in ‘standard’ form, you’ll probably be thinking these are simply excessive creature comforts, but after admiring at the F10 since launch and now being able to live with one for two weeks I’m not so sure.

In an ideal world I’d be looking for the Competition package: sun-protection glass; Harmon Kardon sound; adaptive LED headlights and Comfort Access. Colourwise I’d be thinking Singapore Grey, Sapphire Black or this gorgeous Monte Carlo Blue. I’ve been pleasantly surprised by how much I’ve liked the latest selection of M colours – San Marino Blue, for example. Agreed, Monte Carlo’s an older shade but somehow it’s only recently registered with me since seeing the F10 wear it. And specified with contrasting Silverstone leather, the drug dealer’s dream is complete. 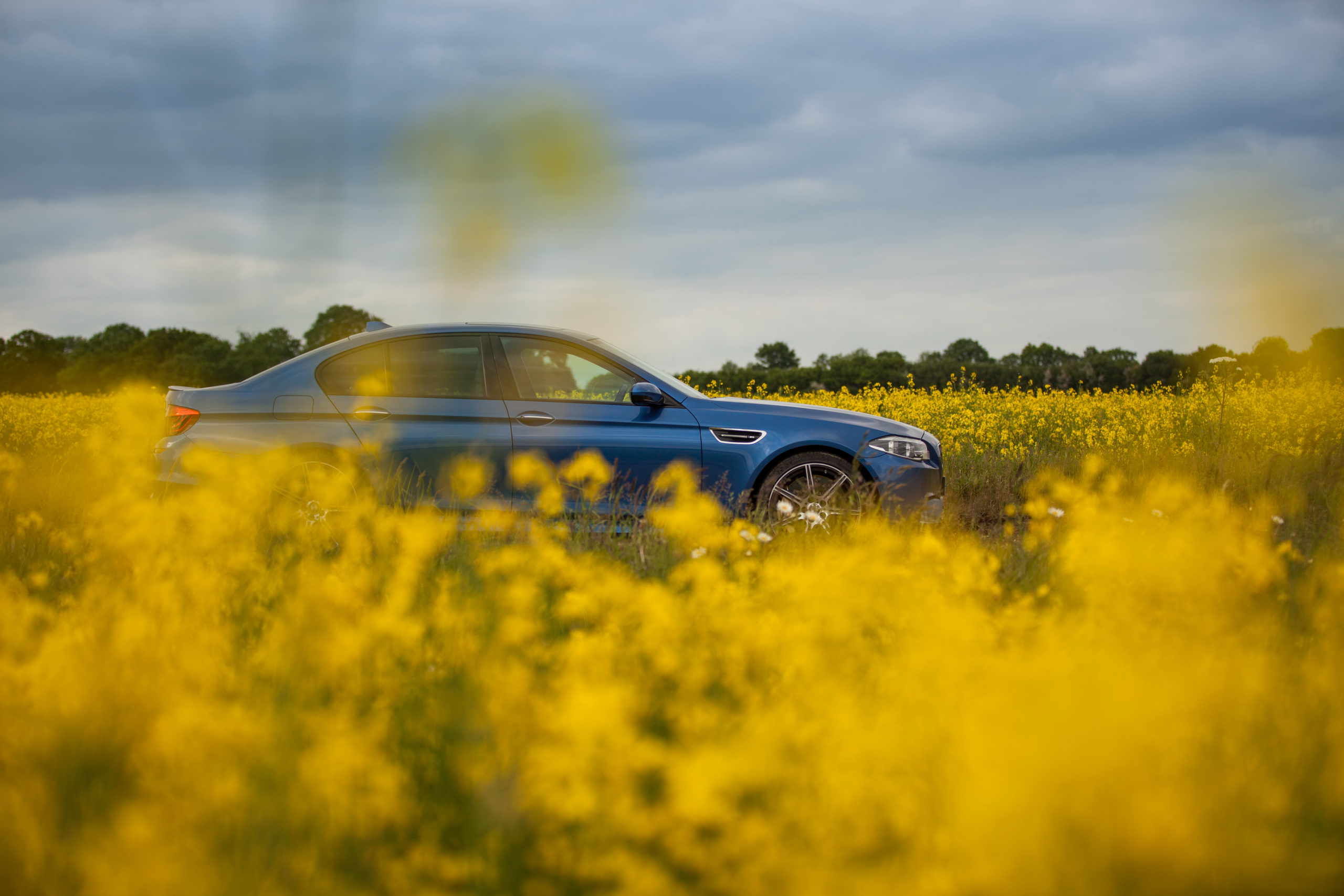 Competition Package aside for a moment, if I had to single out one option I couldn’t live without, it would be Comfort Access. @BMW – please make option #322 standard across all models. Oh, and if I could invent an extra it’d be heated flappy paddles. Seriously, the M5’s are freezing! 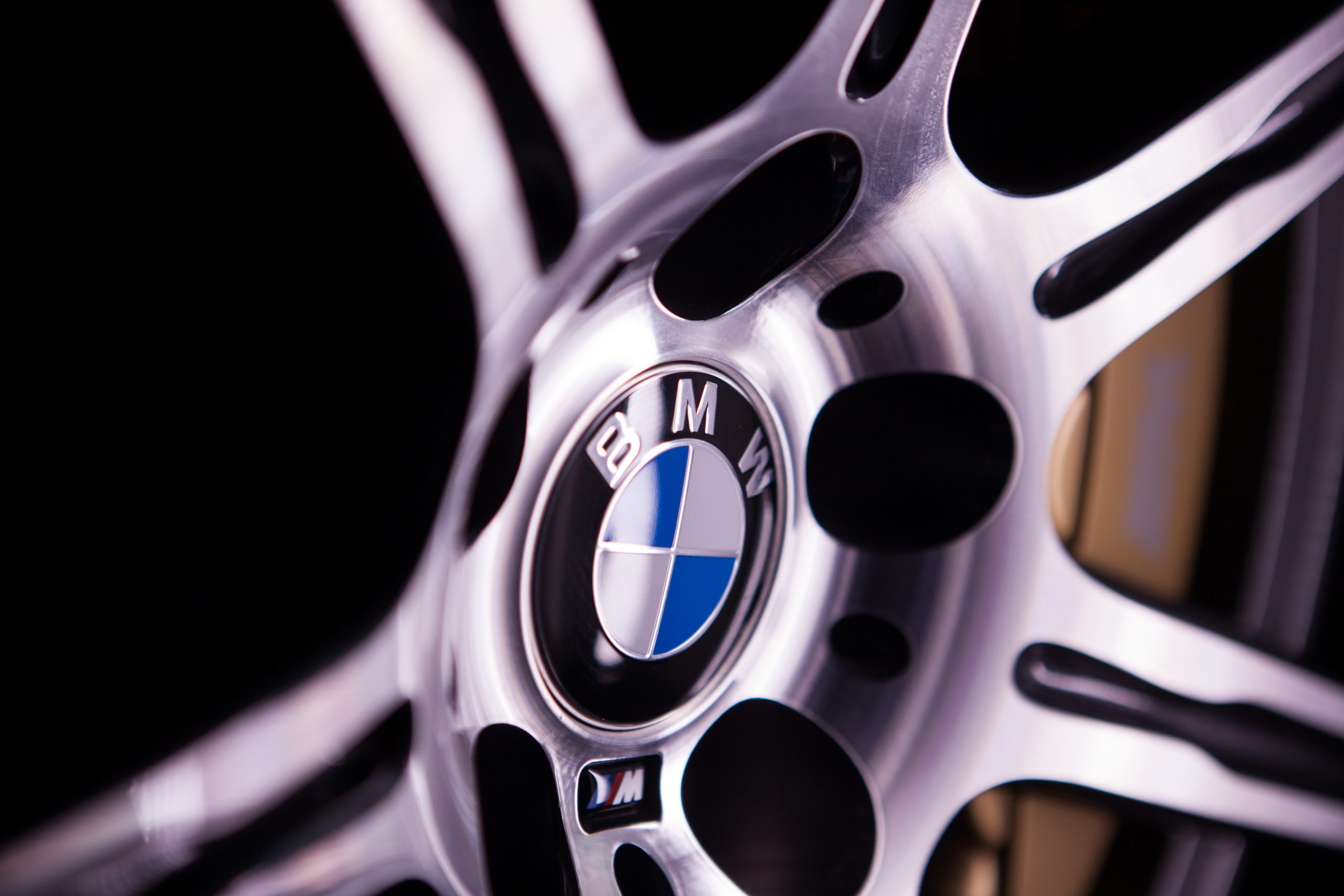 Up next was Anthony Mason’s suggestion of a late-night road trip: London to Aberystwyth.

With kids now comparing Top Trumps on mpg rather than mph, let’s tackle the big one first. How does the F10 M5 compare to the frankly embarrassing E60 M5 at the pump? Let’s base this on the current mileage of the F10, 7,000. If we’d covered the same distance in the E60 it would have cost us a whopping 3,345 compared to the F10’s 1,744. That’s huge progress. (Figures based on the UK’s average price in June 2015 for Super Unleaded.)

Now behind the wheel, out of London and cruising on the M1, you can clearly feel the electronic evolution marching on. Unless you’re out on a track and drifting, the driver is rather numb in this environment. It’s so refined that you end up just sitting back and admiring the general luxuriousness and sense of occasion. But that’s part of what the M5’s about, isn’t it? Then, as you drowsily glance back at the dials while sipping your Americano, you notice that you’re cruising at triple figures. Again!

However, all the talk of comfort and refinement is quickly put to one side as the motorways turn into A and B roads and you finally hit that magic M button on the steering wheel. The whole car perks up as if it’s been given smelling salts. The head-up display is hi-jacked by a never-ending rev counter, the DCT box switches to rapid fire and you can feel an almost NOS-like boost as the throttle response sharpens. You then lean on the loud pedal and it sounds as if the world is about to end. “THIS THING’S BIPOLAR!” And if I hadn’t been told about the artificial engine noise being piped through the speakers about 10 times, I’m not sure I’d have an issue with it. 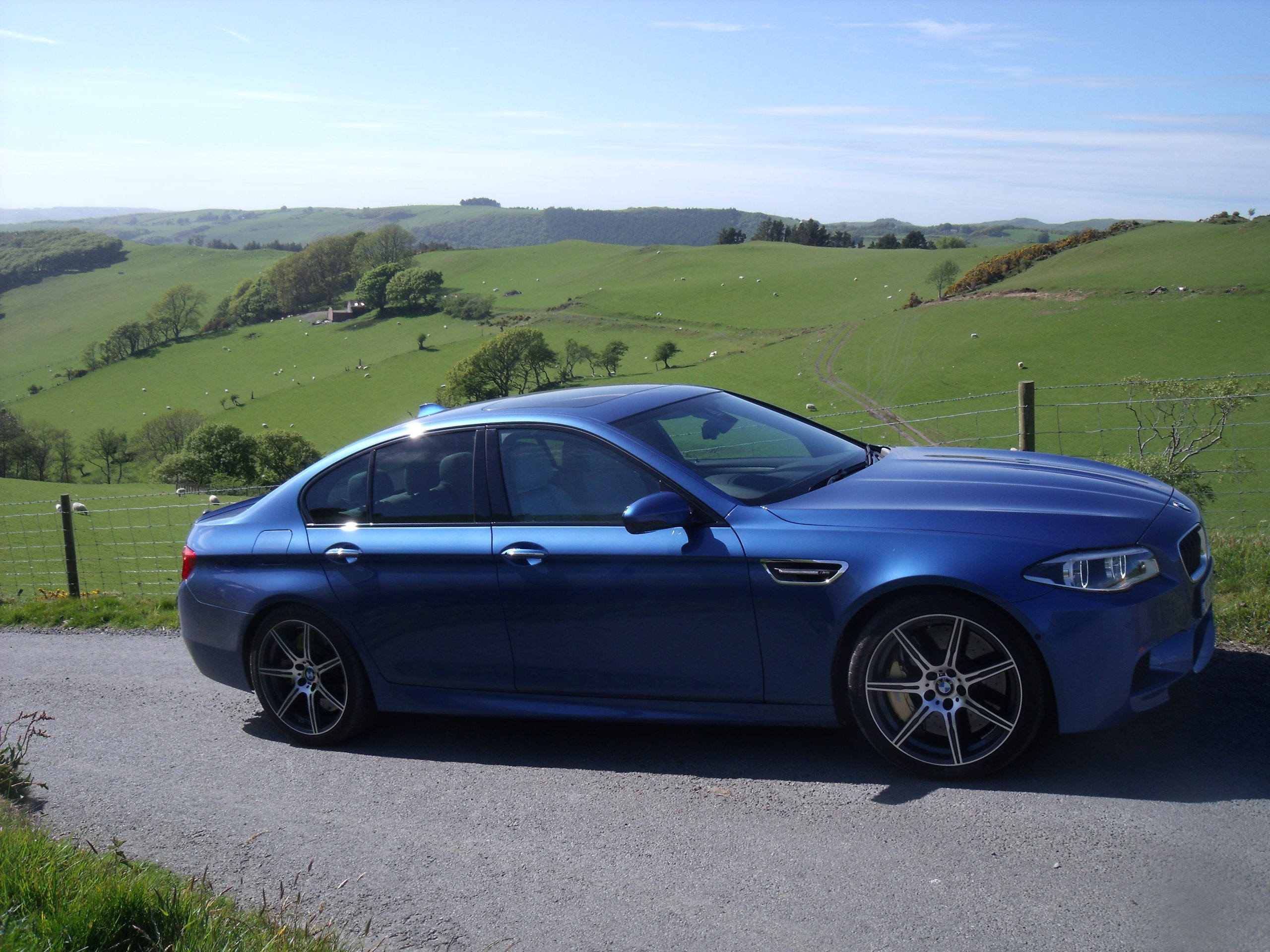 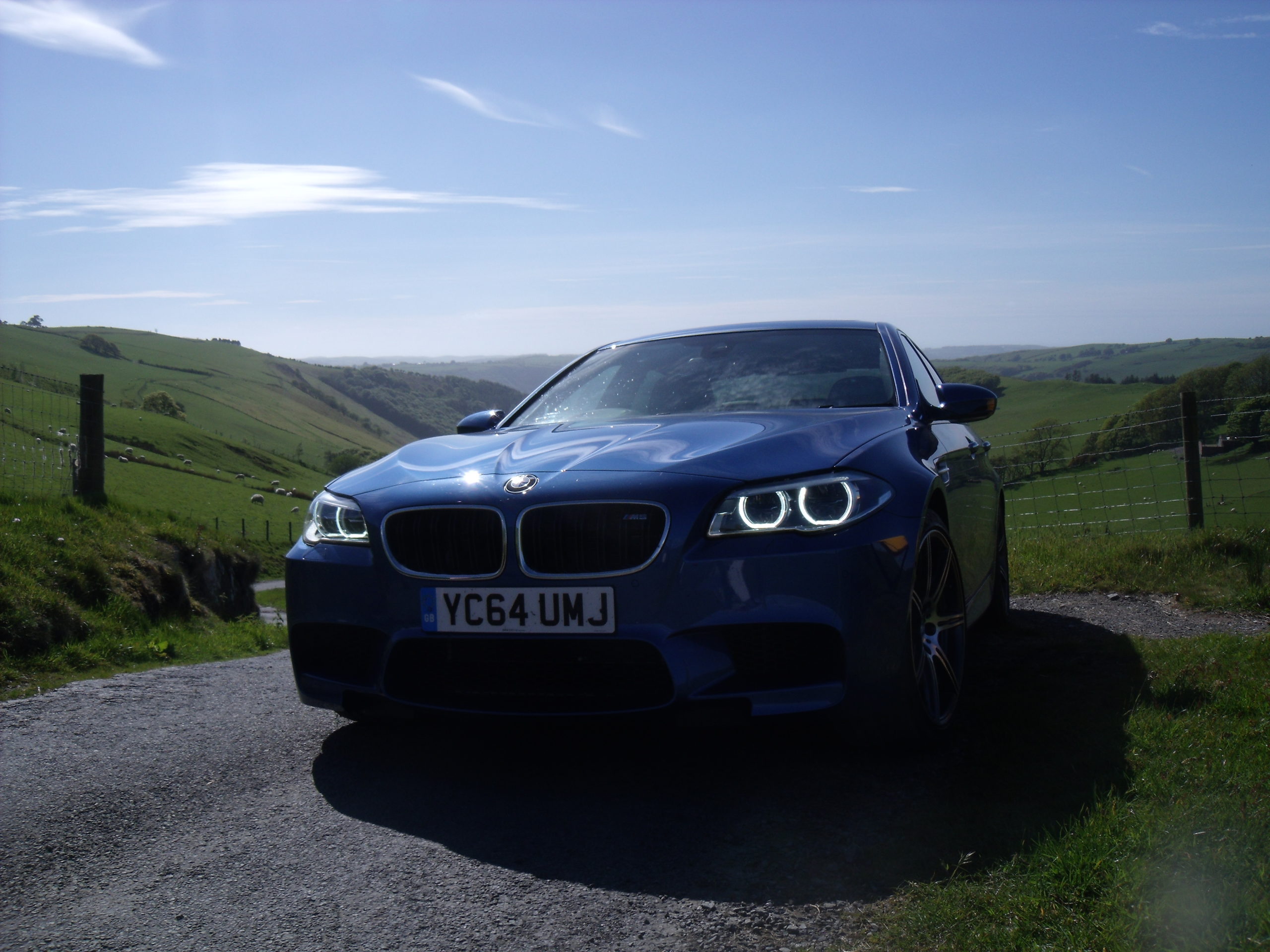 Cocooned in all this luxury and M Power trinkets, it still took me a while to trust taking nearly two tons into a corner with any real speed. But eventually my confidence developed and naturally it held firm with almost zero body roll, leaving my occupant still snoozing. While on the subject of snoozing. I’d challenge anyone to not be able to get comfortable in these multi-function seats. Option #4MA. Tick! Seriously, I’ve never sat in a more comfortable car. (I’ve not tested the M6.) Even the headrest is electronically adjustable. So after only a short while tinkering, it felt like a memory-foam king-size mattress all to myself.

As the sun set in front of us, the next part of the experience unveiled itself: the interior-light package. The cabin becomes awash, with soft amber outlining the door contours and dash, while flashes of brightness highlight the key controls. I can’t praise the head-up display enough. Don’t get me wrong, it’s still visible during the day, but at night it’s the cherry on the top. I soon found the button for the adaptive LED headlights. What a stroke of genius! You can watch them tracking just behind the car in front, progressively dipping and moving as the distance between other illuminated obstacles changes. It’s almost flawless. You’ll never dazzle someone (accidentally) again. 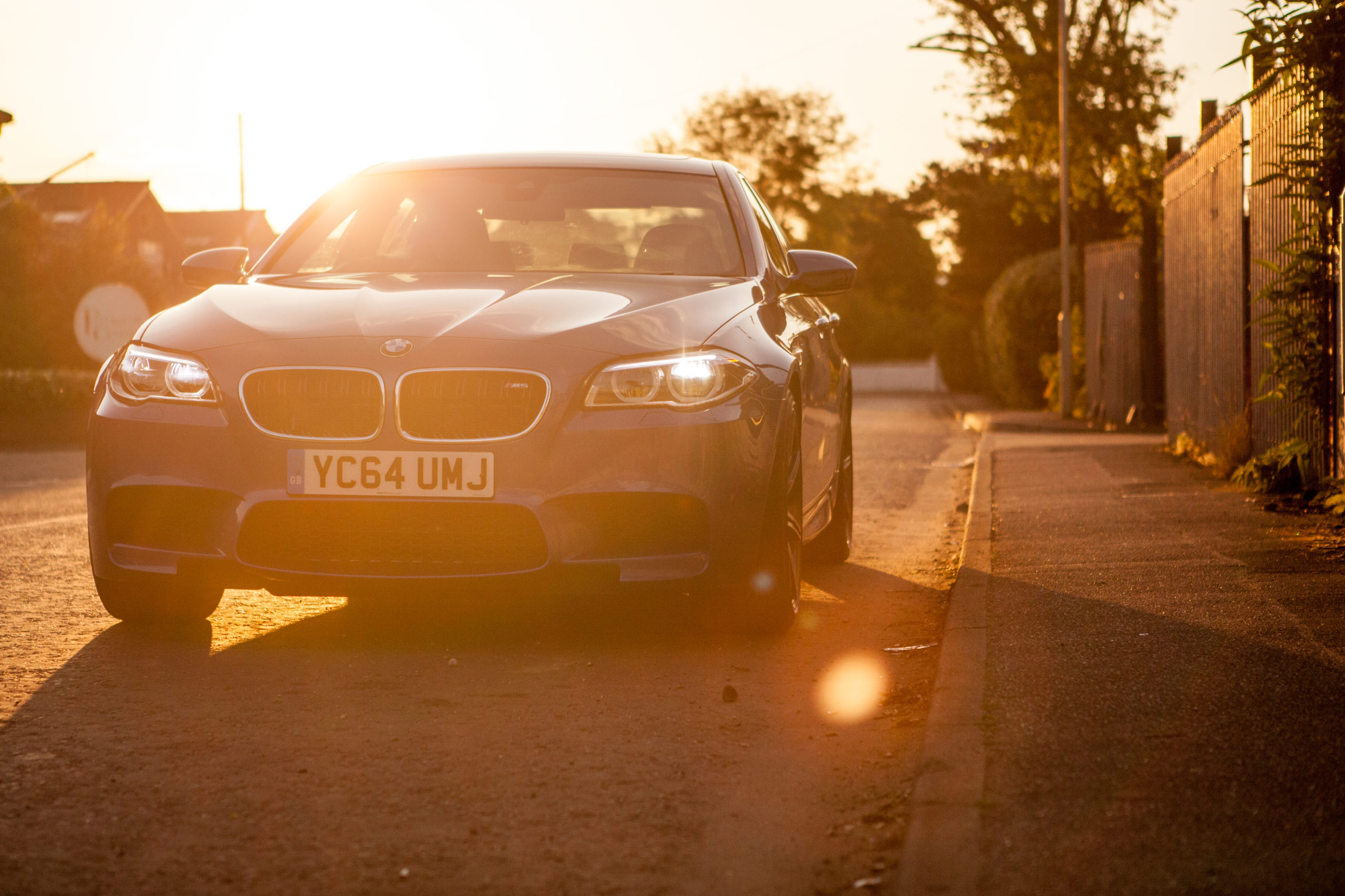 After nearly wearing out every button, we arrived at our destination just after midnight, not really wanting to leave either armchair. Five hours, 223 miles, 23 mpg and still two-thirds of a tank remaining.

As the test days wore on, I very quickly started taking the many refinements for granted. The honeymoon period was fading and the nit picking began. Parking. I’d challenge anyone that says they can make any final adjustments easily. This M5 has so much power that edging up to obstacles is simply impossible, in reverse particularly. The mass suddenly lurches, seeing you worryingly stamp back on the brake pedal like a learner. On a similar note, in anything less than full attack the throttle response is handicapped. Pulling away from a T junction for example feels sluggish followed by an almighty turbo surge, the force of which knocks your head against the rest. More time with the car might have seen these Jekyll and Hyde personality traits tamed but somehow I’m not so sur

Thoughts soon turned to how and where I was going to shoot her. (It’s definitely a she.) I’d had a dark industrial location in mind and felt the M5 would offer a neat contrast. The location I eventually settled for has a slightly sad story to tell. It used to be a successful furniture factory which, on the day I discovered it, had just finished moving its production aboard. What was once a hive of activity is now spookily silent, with tools and random offcuts still lying around covered in sawdust. It was perfect. Of course, the owners thought I was bonkers but they couldn’t see what it looked like through a Monte Carlo tinted viewfinder. 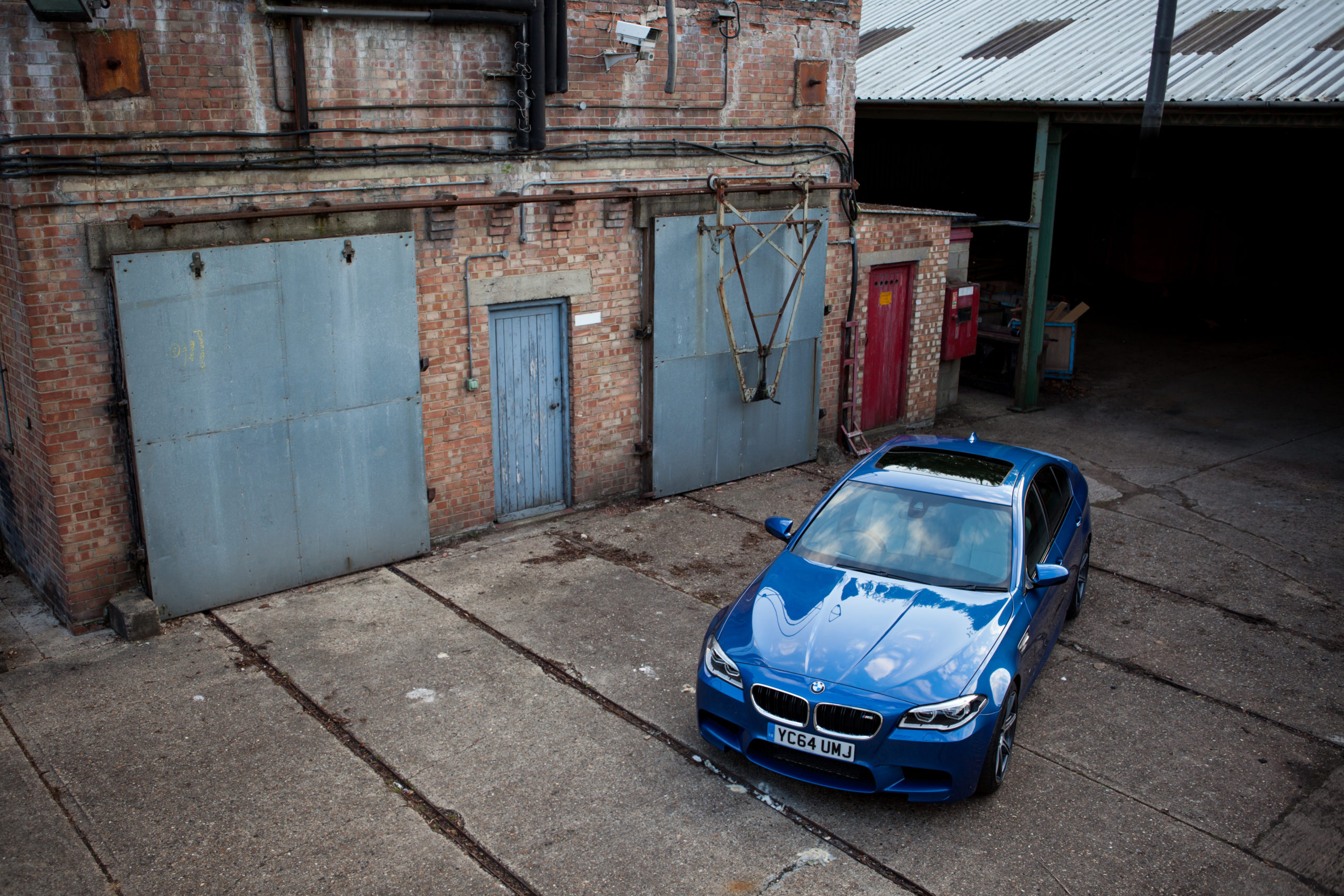 Due to time pressures, we captured all the hero shots in half the usual time, so it was back to check them out on the big screen and shoot the finishing touches on the driveway. Credit to Chris Teagles for his swift and precise camera work and for his tolerance of my OCD.

To conclude, for the right people, the F10 M5 is still the class leader: the original and best super saloon. It makes you feel accomplished and gentlemanly. The F10 continues to epitomise what the M division is all about – despite the inevitable introduction of forced induction. It’s rapid, amazingly agile for its kerb weight, and demonstrates that modern driving can still capture some of the traditional excitement. The main issue for me though is I’m just not grey enough yet.

Please join me in thanking Specialist Cars Stevenage and the Old Charm furniture factory for making this article possible.

This article was featured in August 2015 issue of Straight Six. All back issues of Straight Six can be found in the members area. *Remember to log in 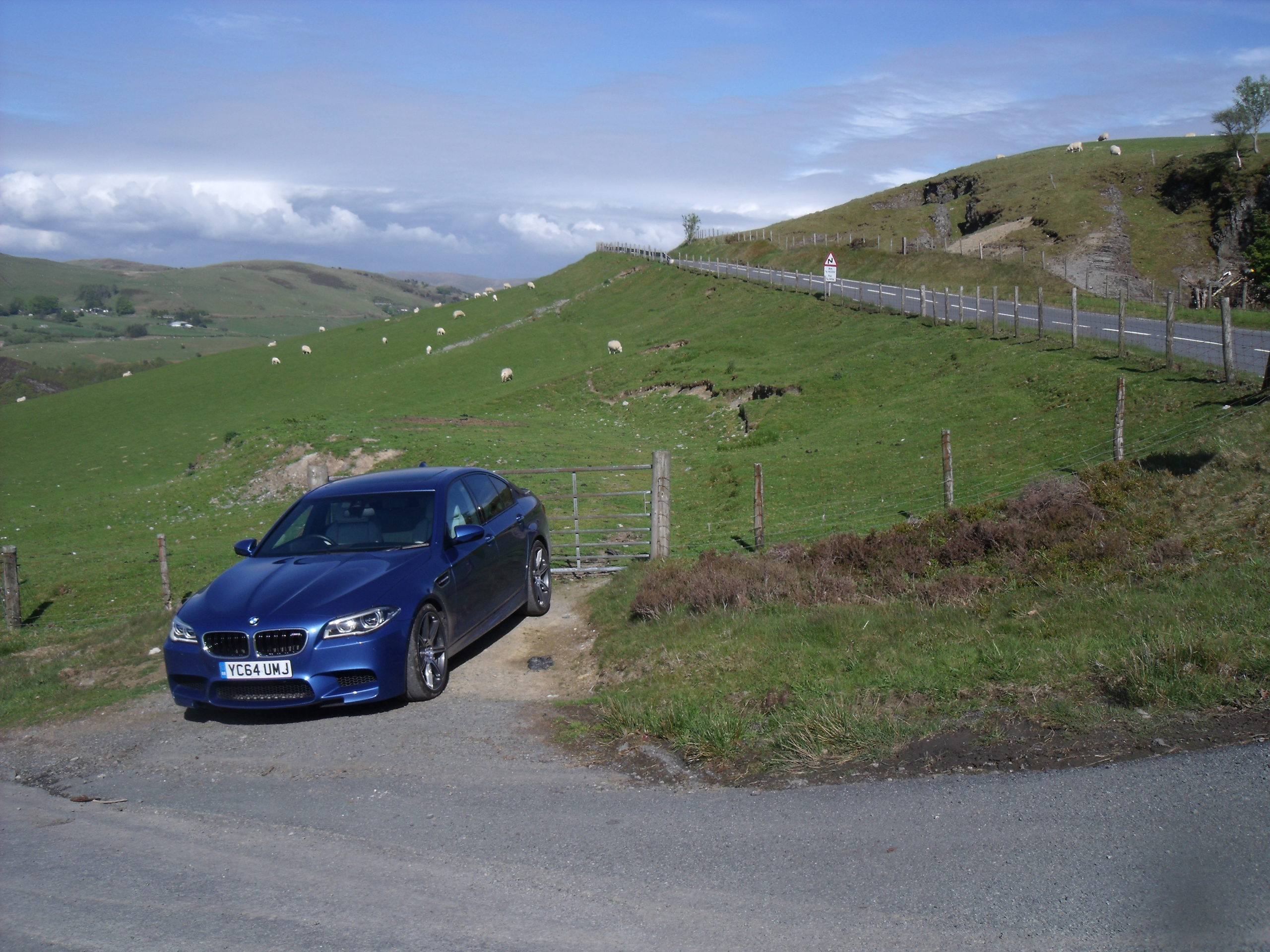