This article was first featured in Straight Six January 2017 and can be found in the members’ area by clicking HERE. Did you know we have all issues of Straight Six available online back to 2013? Read them HERE.

As you make have gathered from the title, this is the last Baur Blog. Every story needs a conclusion and the Baur’s last adventure with me was on the North East stage of the BMW Baton Relay on 26th June 2016.

I was still twiddling with the carb settings in between photo ops but it was running pretty sweetly. So well, in fact, that on leaving Haltwhistle (the geographical centre of Britain) I chose to take the old Roman Military Road alongside Hadrian’s Wall rather than the A69 dual carriageway to Newcastle. The Baur just wanted to keep running so I turned north up to Otterburn just short of the Scottish border, and then zigzagged my way back down to North Shields at the mouth of the River Tyne. Nearly 200 miles and it didn’t miss a beat. I’m really pleased with the way the Baur has turned out. There are some little jobs that need doing, but then there always will be on a 33 year old car (34 years if you count from the BMW build date). The electric mirrors have never worked and I have a spare heater control panel to replace the cracked original. I still have to fit the new choke cable, but the car is fully road legal and usable and I feel now is the time to pass on the baton (pun intended).

Back when I bought the Baur I thought it would need a ‘little light recommissioning’. It’s ended up being a bit more than that, but not quite the full make-over that the BMW Classics E21 received. The intention was to save a nice interesting car, which due to its rarity, is something of a historical artefact for BMW and Karosserie Baur. It’s been an interesting project with some stiff challenges along the way and it’s gratifying to find what a nice car it’s turned out to be. I guess if I hadn’t been passing it into a safe pair of hands (my good friend Mike Downie from our E24 days) I would find some way of keeping it. It’s that kind of car. 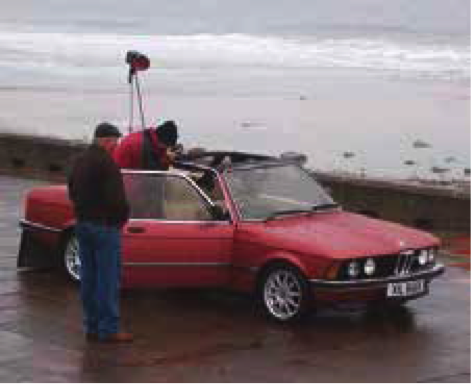 Mike owned an E24 635 at the same time I did and now owns my old E30 320 Cabriolet, so we have a common history. Mike has followed the Baur’s progress with interest and has given support and encouragement in dark times (I’m thinking of the gear linkage roll pin among others!). I will still see the Baur regularly and I’m sure there will still be some hands-on action in the future.

The Baur has had an interesting life. Starting out as a wealthy person’s plaything, its early life is a mystery. The enthusiastic benefactor who took it into his care in 1996 probably saved its life. The 15 minutes of fame in 2006 as it became a Total BMW magazine celebrity was followed by a brush with death and then five years hidden away in a barn with only mice and bats for company. Dragged back into the light in 2012, it has been slowly nursed back to health and in 2016 is once again ready to do what it was built for – drive the open road. I’ve learned a lot from my time fixing up the Baur. Thanks to the Internet, there is always advice to be had from people all over the world who all share your interest. There is nothing like getting your hands dirty to form a bond with a car – chequebook restorations miss out on that aspect. New owner Mike is keen to sort out the non-functioning mirrors and fit the replacement heater control panel so the Baur’s future looks assured.

Postscript: the night before I was due to take the Baur up to Mike I found a power steering hose had split where it joined the reservoir, and dumped the lot on the garage floor. A desperate search for some new 16mm hose was successful, and with fresh fluid (again) and new larger idle jets, the Baur positively flew to its new home. Like I said, there’s always another job to do!

This article was first featured in Straight Six January 2017 and can be found in the members’ area by clicking HERE. Did you know we had all issues of Straight Six available online back to 2013? Read them HERE.