From the Archive: What do you call a misguided, overpriced failure? Car of the century, of course!

This article was first featured in Straight Six January 2017 and can be found in the members’ area by clicking HERE. Did you know we had all issues of Straight Six available online back to 2013? Read them HERE.

As you can imagine, given my day job, I’ve been lucky enough to drive many different BMWs, from racing Batmobiles to rare Alpinas and lightweight ///M specials, and most production variations in between. But one car – in fact you could call it the car – has always eluded me. The most expensive, almost certainly the most beautiful, and possibly the rarest. A car for which the word iconic – for once – is more than appropriate, a BMW that rises above passing fashions for retro cool and remains embedded in the minds of connoisseurs and collectors as a true masterpiece, a car who’s elegance may never be surpassed, a car… oh you get the idea. We are, of course, talking about the BMW 507.

So today you find me living out a fantasy. This clear, warm, sunny winter’s morning, I’m behind the wheel of this fabulous automobile, sweeping round the gentle cliff top curves of the Basse Corniche heading for Monte Carlo, Mantovani gently wafting from the speaker, mixing with the laughter of my blonde, supermodel passenger. The sparkling azure Mediterranean Sea stretches before me, like a jewel set amongst the craggy rocks and Umbrella pines, glinting in the sun. We slow down for an obstacle ahead. It’s a Tesco delivery van.

Oh OK, so we are in Chelwood Gate, not Nice. And the radio doesn’t work. My passenger isn’t a blond supermodel. It’s James, the technician. We’re not headed for Monte; in fact we are road testing the 507 as the final point on the job card, before signing off and returning the car to BMW, fixed and ready for press duty. But it is sunny and warm, and the 507 has a magical quality, the ability to transport you to your dream road, the car’s flowing curves and art deco embellishments reflecting a bygone age of Grace Kelly-era glamour, exotic parties on wooden yachts with servants in crisp, white uniforms. Even on a winter’s morning in Sussex. And I’m not exaggerating.

The 507 is without doubt the most wonderful car, which captivates everyone who lays eyes on it. I try to ignore the astronomical price tag attached to this piece of BMW history – somewhere between 2-3 million by some estimates – but suddenly every oncoming vehicle presents a risk, and I’m super conscious of every action, from changing gear to indicating, listening intently to the engine noise for any sign of trouble. The noise of the 3.2 litre V8 is fabulously smooth – this is not studio produced sound – and while this is no supercar – in fact the engine note has little relativity to forward motion – the 507 was never trying to be about speed. The 507 is about class, elegance, style, exclusivity. Never mind the engine, I’m purring like a Persian cat as we cruise the Ashdown Forest roads. 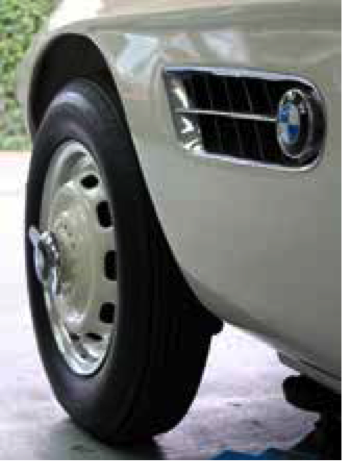 Like many of BMW’s best moments, the 507 was, in modern parlance, an epic fail. This time, the fail was bad enough to bring the company to the very brink of collapse. The fifties was a difficult period for a firm that a decade earlier had pretty well been run by the SS. Post war, having battled the Russians for the name (and won) and convinced the Western Allies to let them get on with the peace time business of making motorcycles – only to watch demand collapse in the wake of the economic recovery – BMW were struggling for an identity. The Munich board was as polarised as the companies’ product range, represented at one end by the comedy (but popular) Isetta bubble car, badged as a BMW but hurriedly borrowed from ISO, and on the other by the desire to emulate, even beat, Mercedes Benz as the leaders in the high margin luxury sector.

Enter Max Hoffman, arguably the most influential (and controversial) non affiliated man in the US auto industry, a man clearly ambivalent about conflicts of interest. Hoffman it was who convinced Mercedes that there was a market for their superb (but expensive) 300SL, and also being the US importer for BMW, was keen to encourage Munich to launch a car that would sit somewhere between the overpriced Merc and the cheap British two seater sports cars that were taking the US West Coast by storm. Hoffman even got to choose the design, rejecting BMW’s in house efforts and choosing an outsider with little track record, Albrecht Goertz, to do the job. Whether or not it was prudent for BMW to concentrate on the luxury sector when they had no mid-priced, mid-range popular offering seems not to have troubled Hoffman – at least not till later.

Given such a brilliant start – the design was perfect, and the company had a ready-made V8 to drop straight in to the engine bay – it’s hard to imagine how BMW’s bean counters then got it so catastrophically wrong. Originally pegged for a retail price of around 5000, production costs soon spiralled out of control, with the eventual showroom price more than double the original figure and crucially, costing more than the SL. Hoffman estimated orders of more than 5000 per year. In fact production ceased at a humiliating 252 units.

Of course all this just adds to the legend. Failure never stopped BMW, it just made them stronger. Today, the 507 remains as a witness to a company that bore little to no resemblance to the vast, ludicrously successful, global giant that we now know – an insolvent also-ran, rescued by the Quandt brothers from the clutches of the receivers back in the heady days of December ’59. But it is strangely appropriate that the 507 has become so valuable. It represents a moment in the evolution of BMW that no other car can get close to. The 507 defined an ambition and made a statement that would take BMW generations to recapture. It closed the door on an era that started with planes, passed through two wars, survived a broken country and very nearly ended in ignominious financial ruin. A new door would open, and the rest, as they say, is history. But for me, the 507 remains, quite possibly, the car of BMW’s century. 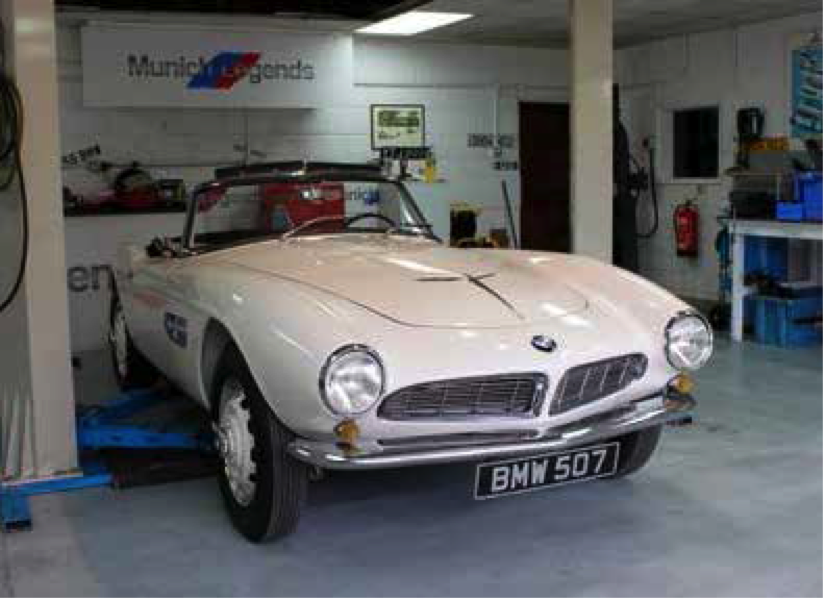