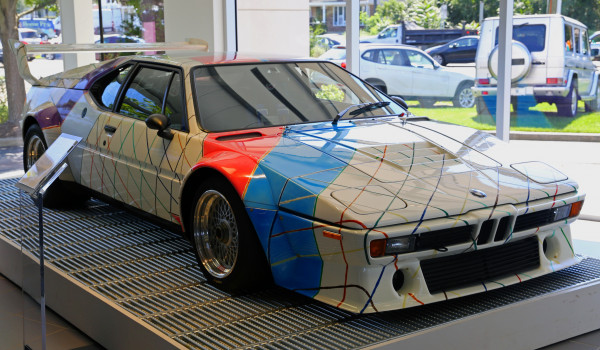 Although penned by Frank Stella, the famous abstract and minimalist artist who painted the second official ‘Graph Paper’ BMW Art Car following Alexander Calder, this BMW M1 ‘Art Car’ isn’t the ‘real deal’, inasmuch as it isn’t an official BMW (Group) Art Car. But make no mistake, this M1 Procar is as real as they come… confused? Read on to find out more… Words/Photos Jeff Heywood 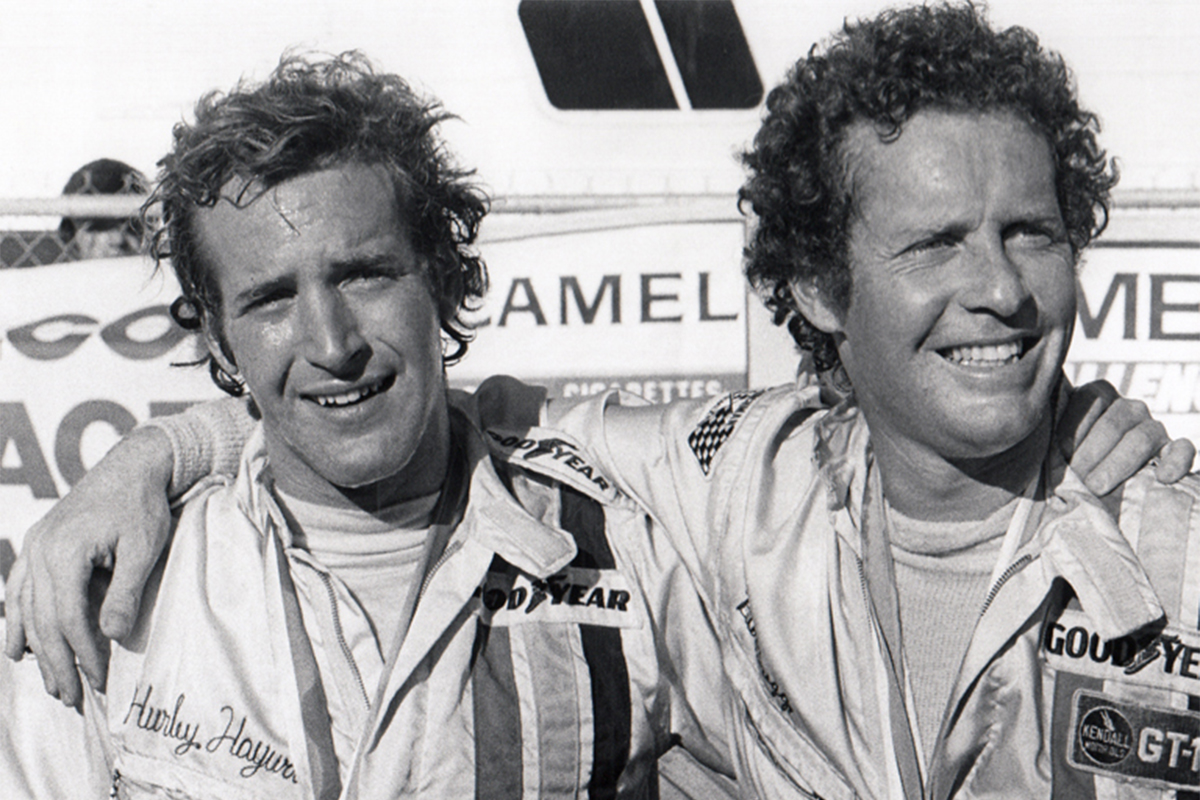 The lines that track the M1’s panels were designed and painted by Stella himself. Its story carries further though, having been commissioned and owned by the late racing legend, Peter Gregg, and dedicated to the memory of his great friend, ‘Super-Swede’ Ronnie Peterson. Clearly, it’s a car richer in history than almost any other; however, you won’t find it on display with BMW’s Art Car collection, which we think is rather sad…

As shocking as BMWs ‘indifference’ to the Stella M1 may be, that’s not without good reason – at its core, unlike the 17 official Art Cars, this M1 wasn’t commissioned by BMW. From the outside, it appears to be merely a tribute, inspired by the programme launched by BMW in 1975. However, Stella’s M1 Procar is the only car painted by a BMW ‘factory artist’ outside of BMW’s own collection, and it is, of course, a true, genuine Frank Stella piece, thus giving some credence and credibility to the car’s legitimacy. What’s more special, however, is how the car came to be, perhaps giving it as much, if not more, credibility and significance than any official Art Car could hope for…

After completing the commissioned E9 3.0 CSL Group 5 race car for BMW, Frank Stella followed the car to France, where it raced in the 1976 24 Hours of Le Mans in 750hp, 212mph turbo format, driven by Peter Gregg and Brian Redman. In the time that followed, Stella’s enthusiasm for racing flourished, turning him from artist to artist and racing enthusiast – something he proclaims enthrals him even to this day.

In the spring of 1977, at the famed Nurburgring, Stella met Peter Gregg and Ronnie Peterson, both of whom piloted ‘his’ CSL around circuits across Europe. A friendship was born, and throughout the following year, Stella toured a series of races and circuits, joining Gregg and Peterson regularly.

Moving on to the car itself, it was in August of 1978 that Peter Gregg submitted a letter to Jochen Neerpasch, head of BMW Motorsport. It read: “Please accept this letter as our firm order for a BMW M1 racing coupe to Group 4 Specifications. We would like to have this car as soon as it is convenient.” As the car was built, Gregg continued with requests, asking that the car be fitted with a passenger seat and harnesses, and that the seats themselves be clad in tartan fabric. A ‘sport exhaust’ was requested as well, hinting that Gregg was building a race car fit for a passenger, despite the Procar’s purpose-built nature. A completion date was set for the summer of 1979.

Throughout 1978, Peterson, Gregg and Stella continued to travel together, from the 24 Hours of Daytona to races throughout Europe. Later that same year – in September ’78, at the Italian F1 Grand Prix in Monza – Stella and Gregg were present to watch Peterson race with Lotus, alongside team-mate and fellow legend Mario Andretti.

The race began poorly, and while the first four positions – Andretti, Villeneuve, Jabouille and Lauda – escaped without issue, Peterson, in fifth, was the first to encounter trouble. The poor start caused traffic on the tarmac, and after James Hunt collided with Peterson, the ensuing accident captured 10 cars, including Hans-Joachim Stuck. Peterson’s car was sent careening into the barriers, and upon collision, erupted in a blaze. Drivers Hunt, Depailler and Regazzoni were quick to pull him from the wreckage. Fully conscious, Peterson was laid flat on the asphalt, with Hunt by his side.

Peterson suffered incredible damage to his legs – three fractures to one and seven to the other – but not life threatening, or so it seemed… During the night, in a hospital in Milan, his condition worsened. At 9:55am on 11th September, 1978, a fat embolism ultimately ended Ronnie Peterson’s life and phenomenal racing career with absolute tragedy.

Gregg and Stella lost a dear, close friend, which affected them both in unexpected ways. At the time of the accident, Stella had been hard at work on his latest series of art, named ‘Polar Co-Ordinates’. Presumably as an emotional outlet, [E1]

Before its completion, Stella dedicated the series to Peterson following the harrowing accident.

In August of 1979, nearly a year after Peterson’s death, Gregg’s M1, chassis 9403-1053, was ready for delivery; BMW flew the car in from Munich to New York. As the year came to a close, Stella worked with Gregg to pen a livery for the car. The result was a striking M1, imbued with a powerful component of Frank Stella’s ‘Polar Co-Ordinates’ series, painted upon the car itself. As a canvas for the part of Stella’s series, the car’s colours and patterns continue to celebrate the life and accomplishments of the duo’s dearly departed friend. The car was finally completed in early 1980.

Gregg and Stella, of course, remained close; incredibly close, in fact. As to be expected, the next chapter in their story picks up with a race – the 1980 24 Hours of Le Mans. Gregg was set to race in a Porsche 924 Carrera GTS, and eager to watch, Stella joined him in France. Just outside Paris, en-route to the famous Le Mans circuit for a practice session with Stella in the passenger seat, Gregg encountered an ox-cart. As he was overtaking the cart, a car pulled out of a side road in front of them, and in an attempt to avoid it, he crashed into a ditch. Stella and Gregg recovered, or seemingly so. The only lasting damage was to Gregg’s vision – astonishing, all things considered…

Peter Gregg’s history was sure to place him, and has in many respects, among the greatest racers to ever live. With four overall wins at the Daytona 24H Race, two Trans-Am championships and six IMSA GTO championships under his belt, it comes as no surprise that his nickname was ‘Peter Perfect’, taken from the Wacky Races series. Gregg, a Harvard graduate, is also famous for having owned Brumos Porsche, where he sponsored and raced with the iconic Hurley Haywood. His career, at just 40 years old, was soaring, or so everyone thought… 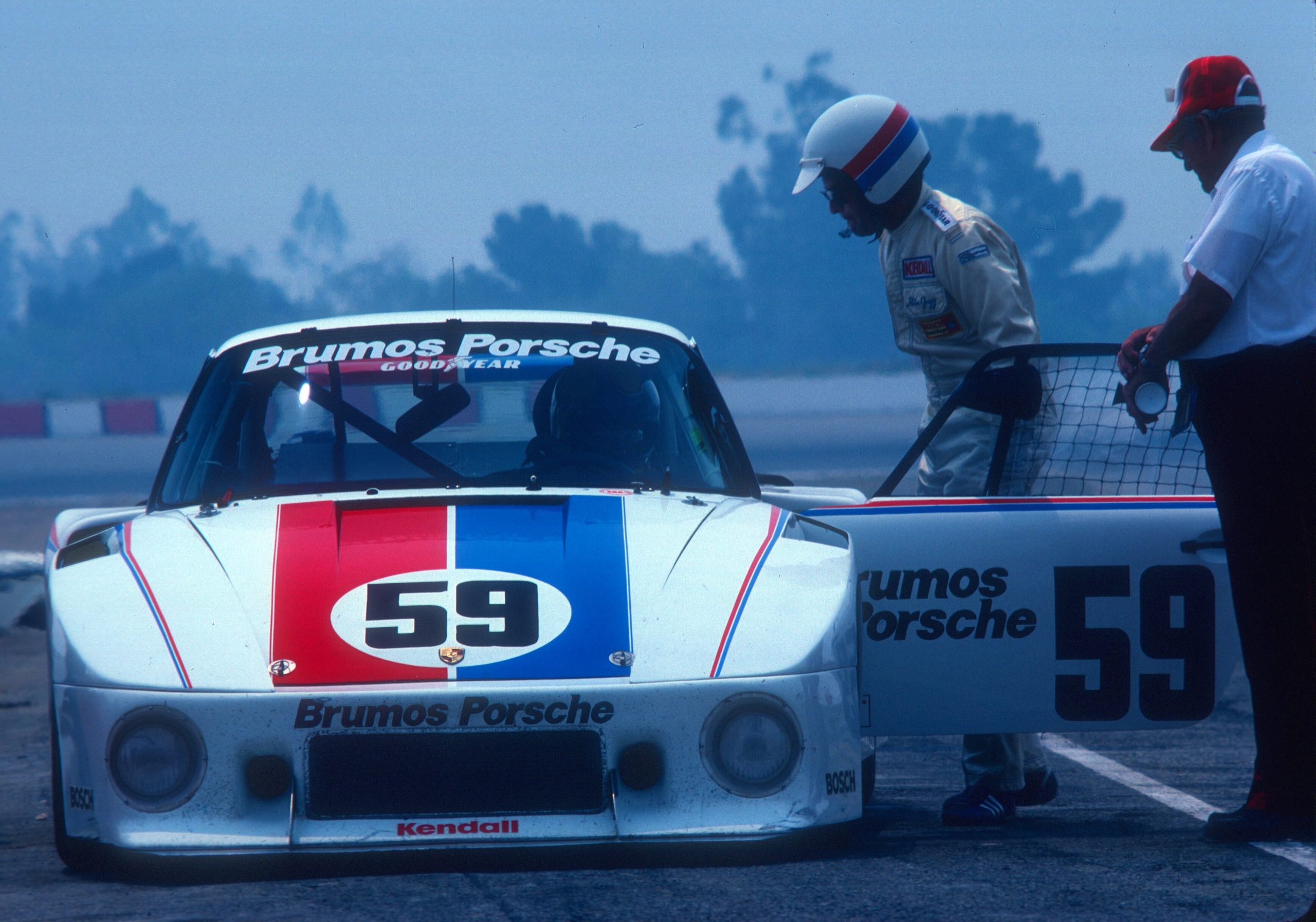 A couple of months after his crash in France, Gregg was back behind the wheel of his Porsche, competing in the Paul Revere 250 at Daytona. His partner Haywood, who was scheduled to drive for most of the race, soon fell ill whilst leading, leaving Gregg to fill in for the rest of the race, but their Porsche fell back, Gregg eventually finishing third. Suffering from double vision, he was soon barred from racing by IMSA…

A hitchhiker, travelling along Highway A1A near Jacksonville, Florida, found Peter Gregg’s lifeless body, and beside him a .38 pistol and a briefcase. Inside, along with the receipt for the gun, was Gregg’s suicide note, and written upon it, ‘I just don’t enjoy life anymore’. Addressed to his new wife, his ex-wife, his two kids, and business partner Bob Snodgrass, the note detailed his downward spiral. It was Gregg’s ceaseless double-vision that pushed him to the edge… an insurmountable obstacle that distorted his reality.

With 340 career races and 152 wins, he was seemingly unstoppable. His 47 IMSA GT victories situated him as the all-time best – no one could compete with Gregg’s talent behind the wheel. When IMSA barred him from racing as a result of his vision, Gregg was left with nowhere to turn. In an instant, his racing career had ended, yet his talents had far from run dry. Peter was at the top, with a long way to fall. His vision worsened; where we saw one, Peter saw two, and his inability to resolve it tore his life from his fingers, living or not.

The M1 – a tribute to Peterson, and now, in some respects, Gregg as well – was left to his wife, Deborah Gregg. A decade later, in April of 1990, she sold the car to Stephen and Barry Tenzer, having only put 50 miles on the car. It was at the Tenzers’ home that things went vague. Their Long Island coastal home flooded, and some say that as a result, the M1 was submerged in seawater. It’s said that, with the Tenzers wary of risking long-term damage, the car was sent to marque expert Ray Korman of Korman Autoworks, famed in the world of BMWs for his attention to detail and prowess fettling classic BMWs. However, Eric Wensberg, brought in to inspect the car for the insurance claim, states to this day that the car was not at the Tenzer residence at the time, and thus never suffered water damage. Looking at the car in person, it’s easy to see that Wensberg is no liar – it’s as beautiful as they come.

After a lengthy display tour later in the Tenzers’ ownership, the car was eventually given to the Guggenheim Museum in 1999. Unfortunately the Guggenheim was far from prepared to share such a piece. Ari Wiseman, deputy director at the Guggenheim, said: “This is a work we have not exhibited and it has significant maintenance and storage requirements… we’re not well equipped to manage these sorts of objects.” Although the Guggenheim wasn’t enthralled with their automotive ‘gift’, they did value the artwork at $2.1 million dollars in an appraisal when the Stella M1 was gifted to them in 1999…

This, of course, led to the car’s eventual sale in 2011, and it was Jonathan Sobel who placed the winning bid. Appraisers assumed a value somewhere between $450,000 and $600,000, but it was a jaw-dropping $854,000 that took the car home. Sobel was the owner of Southampton BMW, of Suffolk County, New York, and is well known for his BMW collection.

Eventually, the car was prised from Sobel by ex-pat Peter Gleeson, an ex-south-Londoner and now Seattle based; and thanks to him, many have been able to see this magnificent work of art and automotive history on the green at Pebble Beach and at various museums, displays and car shows throughout the US. Peter is heavily involved with the BMWCCA and has an incredible collection of BMW Motorsport race cars (amongst others, such as an Aston Martin-Zagato), including his 1973 BMW 3.0 CSL road car which was voted runner-up in the 100 Years of BMW class at the Pebble Beach Concours d’Elegance in 2016. He was also named the ‘2016 Master Collector’ by America’s Car Museum (ACM); his collection was on display for 12 months at the Tacoma-based Museum.

Peter can be found on Facebook, and is a lovely guy with a large and important car collection containing many E9 CSL race and road cars and at least three M1s including this ‘Art Car’, plus the ex-Matthew Harding Z1. You can also view a video of Peter’s M1 on YouTube, just search for ‘1979 BMW M1 Procar (Frank Stella Art Car)’.

As a car born from tragedy, through its numerous ups and downs, it is inarguably a treasure – and as far as we’re concerned, it’s as real an art car as any other. Burdened by a saddening history of the death of two of racing’s best, we can only hope the car continues to live on, celebrating the life of those who are responsible for its creation. 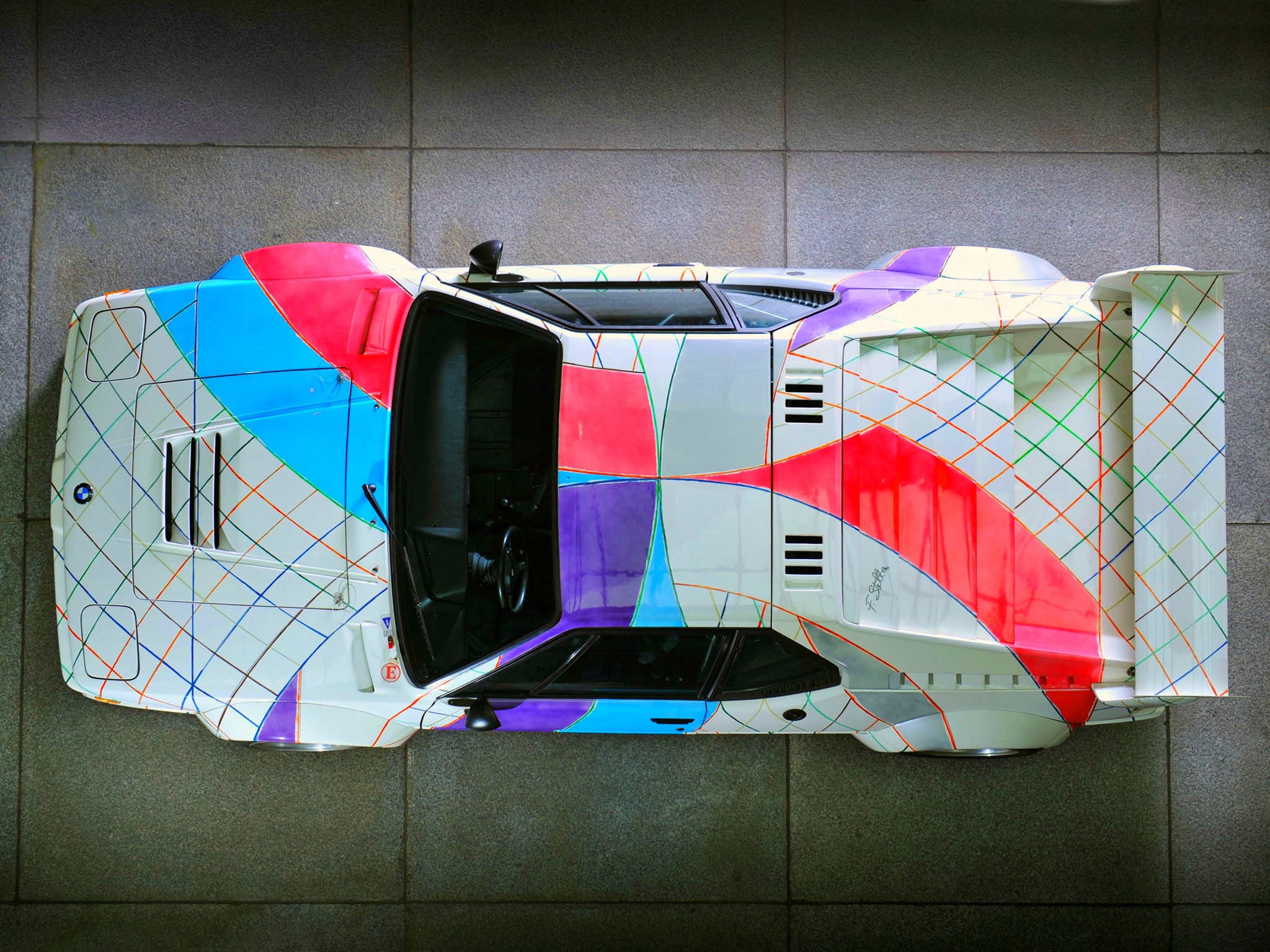