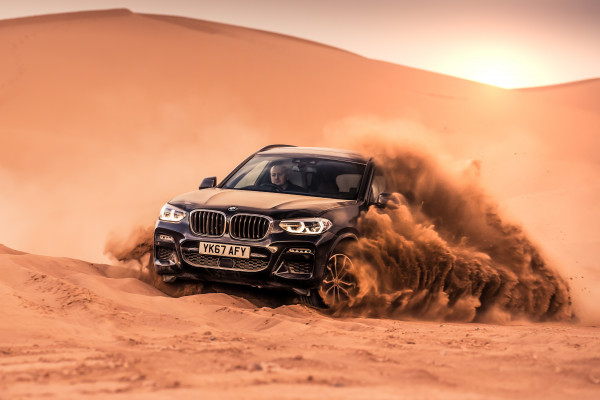 Ever since I visited BMW’s Swedish winter test centre at Arjeplog, just a few miles shy of the Arctic Circle, I’ve been a big fan of BMW’s xDrive system. The way it was able to find traction on polished ice that it was virtually impossible to stand on was deeply impressive. I’m also a fan of the X3 – perhaps less so the original E83 generation machine – but I always thought the second-generation model was one of the high points of the range. Obviously not one of the sporting highlights, but as an all-round family wagon it was exceptionally good. So when the opportunity arose to go and sample the latest G01 version of the X3 on BMW UK’s launch in Morocco I leapt at the chance. This would be a chance to sample xDrive in an altogether different landscape.

The plan is to arrive in Marrakech, depart early the following morning to head south over the Atlas Mountains, take in the Atlas Film studios and then more or less head south until the roads run out, and then turn right onto the Sahara for some dune bashing. After a night in the dunes we’ll have several hours of off-roading before heading north, back to Marrakech and a flight home. Our steeds for this 700-mile round trip will be xDrive20d and xDrive30d machines with the promise of plenty of wheel time in both cars, and the long trek should show up any Achilles heels the cars may possess.

I should at this point own up to a rather embarrassing product knowledge faux pas. As the first-generation X3 was based on 3 Series running gear I rather naively assumed that the second- and third-generation machines would feature 3 Series underpinnings, but it turns out that they’re both actually based on the 5 Series, F10 in the case of the F25 second-generation and G30 for the new G01 X3. No wonder I was so impressed with the F25… and given how good the latest Five is, I’m expecting the new X3 to be pretty exceptional.

Before we embark on our road trip we should have a quick look at what the new X3 has to offer. It’s certainly an important machine for BMW – the F25 version sold over 930,000 units during its lifetime – and with the onward march of the SUV as the vehicle of choice for families these days, BMW is predicting that the X3 will represent 12 per cent of its total sales volume in 2019 and that during the car’s run it will account for 1.6 million sales. In terms of size it is virtually identical to its predecessor, and to my eyes the styling is more or less spot on, although the kidney grilles are at the upper end of what I find acceptable with regard to their size.

Inside, the interior design closely follows BMW’s latest philosophy and if you’ve spent any time in the latest 5 Series it will be pretty familiar. It certainly feels pretty classy, a feeling that’s backed up by comfy seats (in both SE and M Sport guises) along with new Vernasca leather. It’s practical too, with a 40:20:40 split folding rear seats and an impressive 550-litre boot capacity – drop the seats flat and you’ve a wardrobe swallowing 1,600-litres to play with. There are some neat touches too, with the retractable load cover slotting under the boot floor when not in use. 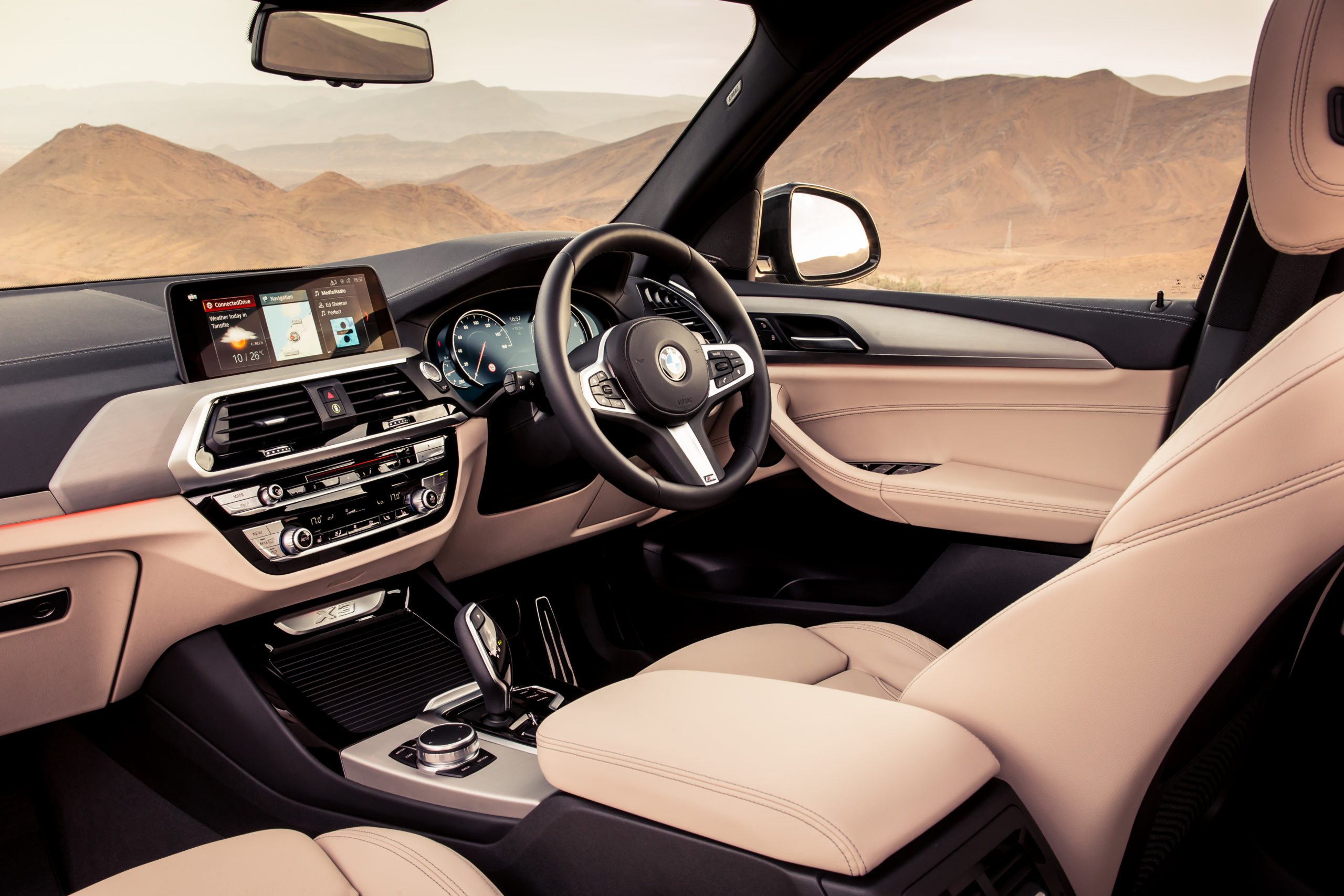 The X3 has plenty of kit as standard, and as it’s based on the latest 5 Series there are a host of optional extras to choose from as well. All models receive LED lights front and rear, 18-inch alloys (SE, 19s on xLine and M Sport), tri-zone climate control, leather seats, navigation system (Professional on M Sport models) and expected items like a host of airbags, DAB radio and Bluetooth.

The models we’ll be testing in Morocco are the 20d and 30d – the expected bigger sellers despite diesel’s recent demonisation – although unlike the previous generation X3 there are two petrol models to choose from, the 20i and the range topping, fire-breathing M40i version. The 20d develops 190hp and 295lb ft of torque, good enough for a sprightly 8.0 second 0-62mph time and a 132mph top speed, yet it’ll still return a claimed 56.5mpg. The 30d is an altogether more performance orientated derv-drinker with 265hp, 457lb ft of torque and a 5.8 second 0-62mph time yet it’ll still return nigh-on 50mpg (according to the factory claim).

We start off with the xDrive20d – it’ll account for the lion’s share of sales – so it’s only fair we should give it a thorough appraisal. We’ve been warned about frequent police road blocks and speed traps and I can’t help but feel a little apprehensive that we don’t have a glove box stuffed for of dollars or Moroccan dirhams, but we do have reams of paperwork to show the cops should the need arise. As a result we take it pretty easy heading out of Marrakech, and trundling along taking in the sights, sounds and smells of a new country the X3 is the personification of refinement. It’s easy to steer, the standard eight-speed auto (there’s no longer a manual option on any model) imperceptibly shuffles between cogs and the ride’s impressively composed on roads that are (in places) somewhat past their sell-by date.

We manage to negotiate our way out of the built up area without knocking any of the suicidal moped riders off their steeds, and without incurring the wrath of the police we pass, and head off south in search of the Atlas Mountains. It doesn’t take long to get into the foothills and the scenery becomes quite dramatic, with sheer rock faces on one side of the road as we meander alongside an almost dry river bed. Progress is slow, though, as there’s a huge road building scheme in progress to improve access over the mountains, and judging by the number of trucks we encounter on the road it’ll be very welcome once the work is completed.

We eventually come to a halt where the road is down to one lane while we wait for some earth moving equipment to trundle along the road, and after a ten-minute stop there’s a veritable phalanx of journalists behind the wheels of X3s waiting to get on with the trip. As we’re set free the road almost immediately starts to climb steeply and we hit a section of the new road – an impeccably surfaced three-lane stretch of tarmac that climbs to one of the high points of the Atlas Mountains, the Tizi n’Tichka pass at an altitude of 2260 metres. Climbing up there the 20d doesn’t feel overwhelmed, but judging by how quickly some of the other X3s catch us it’s pretty easy to spot which ones are the 3.0-litre machines.

The landscape’s utterly stunning, and the red hued rocks give one a feeling that you’re traversing the surface of Mars rather than North Africa. Tumbling down the mountains on their southern side gives the brakes a thorough workout and they’re not proved wanting, while slotting the adjustable dampers into their Sport setting gives more body control while negotiating the switchbacks. As we enter the outskirts of Ouarzazette, a further 50 miles south of the Atlas, we head to the Atlas Film studios for a quick whistlestop tour. It’s the largest film studio in the world, and if you’ve watched anything with a significant amount of action taking place in the desert, chances are that it was filmed here. The current buzz is around Game of Thrones which has filmed several scenes here, and there’s just time for a few quick snaps to make the children jealous before heading further south towards the town of Mhamid. It’s down towards the Algerian border and is a further 160 miles away, and we need to get a wriggle on if we’re to get there before it’s dark.

The following hours pass in a bit of a blur as we rapidly run out of superlatives for the scenery and the X3. It’s such a complete allrounder – quiet and composed when cruising, and eager to try and excite when you push it harder. This car has been equipped with the optional acoustic glass (windscreen and front side windows) and at just 120 (or as part of a more expensive Comfort Package) it looks like excellent value for money as we’re wonderfully insulated from the outside world in here. Traffic becomes rather more sparse as we head south until it’s a case of becoming rather surprised when you see the tell-tale rooster trail of sand being kicked up by another vehicle. We might still be on paved roads but the fine sand gets absolutely everywhere!

Eventually we arrive in Mhamid and as dusk starts to fall the wind really starts to get whipped around the small town’s ramshackle buildings, and once we have four or five X3s assembled we head off into the Sahara behind our guide in a Landcruiser. Driving tips include switching the traction partially (or fully) off and not to stop on the sand. Initially the terrain is remarkably rocky but as darkness falls we encounter the more traditional sand dunes we’re expecting. Driving is difficult, not because the X3 is struggling in any way, but because the sand being thrown up by the car ahead means your headlights reflect in it like they would in very foggy conditions, but if you drop further back you lose the tail lights of the car in front… and getting lost doesn’t look like it would be a wise move. After a slightly nerve-wracking half hour we arrive at our desert camp, and a very pleasant night is had with wonderful Berber hospitality.

The following morning we’re up with the sun and head further west into the Sahara, with the promise of two or three hours of driving before we join back up with paved roads at Foum Zguid. Like the previous day much of the terrain is remarkably rocky and not what you’d expect from the Sahara, but we do come across quite a few sections of sand dune which are tremendous fun to traverse. We’ve swapped cars overnight and are now in a 30d M Sport, and the extra grunt really makes very light work of the conditions. You learn to let the steering find its own path and so long as you keep moving and keep the engine in its torque sweet spot (which is just about everywhere from idle to red line in the 30d) the X3 feels utterly unstoppable. At some point I’m sure ground clearance would become an issue in the dunes, but the way the 30d conducts itself is quite remarkable.

All too soon, play time in the Sahara draws to a close, and as we hit the tarmac once again it’s time to introduce the throttle pedal to the carpet as we’ve got a good 200 miles or so to go before we get back to Marrakesh and our plane home. The roads are utterly deserted for mile upon mile and the 30d can really strut its stuff. It’s a more tuneful unit than the 20d and with its huge reserves of torque there’s less for the gearbox to do, and it makes light work of hauling us back to and over the Atlas.

Time’s tight but we eventually see some signs for the airport and know our destination isn’t far away and we might even make our flight home. Parking up the sand encrusted machine in the airport car park, one can’t help but reflect that the new X3 really is the consummate all-rounder. After two days and the best part of 1,000km it’s not been in the slightest bit fazed by anything we’ve thrown at it. Comfortable cruiser, entertaining back road blaster, dune basher par excellence – it really will cope with just about everything you throw at it. If it can cope with Arjeplog and the Sahara desert, you can just about guarantee that Middle England won’t faze it either! 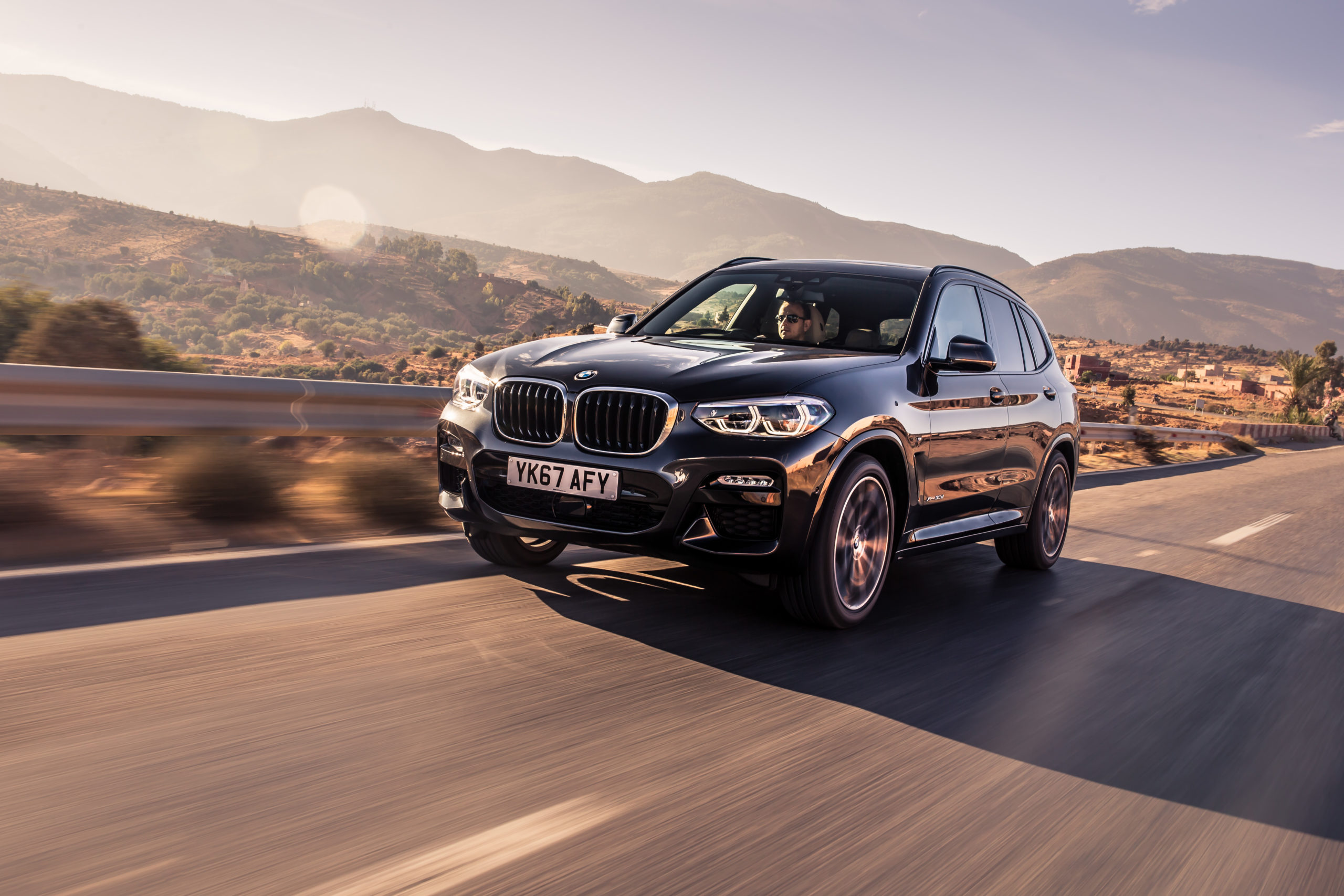