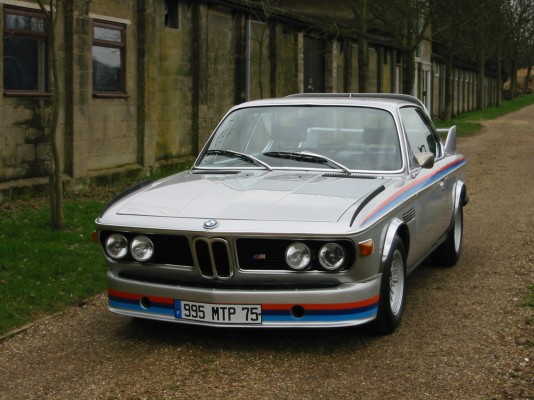 Timing, as any comedian will testify, is the secret to success – so here’s an invitation to share your successful timing, which amazingly found you in the ‘right place at the right time’. I hope this will prompt a regular feature where one can share the moment when the stars aligned! This is my own…

Oddly, I can recall that it was milk of magnesia day in September 2000 when I called Chris Wadsley, our former Chairman, at 9.30am. “Where on earth are you?” I asked, as the normal quiet backdrop was a background of crowd assembled noise! “H&H auction in Derbyshire,” he replied. “Anything worth bidding?” I asked. “Yes, an E9 3.0CSL in Inka orange, one owner with 90,000 miles and a fresh coat of paint, guided at 9-10k.” As a joke I replied “I’ll go to 5k” – not even knowing what a CSL actually was!

The ‘phone call later that day was to let me know I was the new owner. First the excitement turned me to finding out what it was. Asking some questions, I learned that Chairman Jeff Heywood knew the car but had major reservations as to the integrity of the expensive-to-repair bulkhead, as it might have rust issues!

Still, from the limited research at this point, it seemed this was a major car in the BMW evolution, and I remained naively optimistic. Anyone half wised-up about this model sucked through clenched teeth and bid me good luck. I hoped my gung-ho decision might just find me lucky and negate the stream of negativity that was now pouring in from every direction – they are simply rust buckets and expensive to restore!

During the 1970s, rust protection was down to the new owner. Acting wisely, they invested in ‘Ziebart’ undercoating if they hoped to see their purchase last past two or three years.

After digesting the horror stories, and having driven Graeme Lynche’s father’s CSL at Donington, which I really enjoyed, it was time to face up to the facts. So I called Jaymic in Norfolk: “What will it cost me to get this car right?” I asked. “Oh about 10k.” Such bravery was going to cost me big time!

Next call, however, was to Munich Legends and Tony Halse: “How much will it cost me?” I asked. “What a shame ol’ boy, I’ve got a genuine ‘bat’ down here and it’s on the edge between saving and losing her. She’s lived in mid France all her life and has not been restored. Been here all summer and about to be returned to her French owners…” “I’ll be down in the morning,” I replied.

By now my knowledge had been extended to include the famous lightweight ‘bat’ – with factory reference of CSiL, 110 no phase 1 models, with two-post rear wing in colours of Chamonix white or Polaris silver. Phase two being 55no, with a three-post wing to stop the cracking (in the middle of the rear wing) and available in colour of choice.

Following a wholesome breakfast at the nearby Ashdown Forest Hotel, I arrived at Munich Legends at 9am to find this rather dejected ‘bat’ in the courtyard, with heat-destroyed seat fabric and in typical period, yellow headlamp French specification.

Despite having remained outside for the summer and being dusty and grimy, at once I connected with the soundness I perceived in this rather down-at-heel state. Three hours later, having been given ramp room and time to pore through and photograph each corner, I was sold!

Being very familiar with its 18-year-old offspring (the E30 M3) it was a complete joy to absorb the DNA between the two. I could appreciate how one had morphed into the other – a natural engineering progression – and I found this compelling. The evolution, which made so much sense, was logical and understandable,  and the thought of enjoying this timeline was a major part of the attraction.

Added to this excitement was the infamous ‘hit list’ from the guys who had vast experience with the model. This enabled me to see exactly what would be necessary to refurbish the car into a reliable and enjoyable experience. Trying to remain nonchalant (as negotiation was about to commence) an original CSL brochure was dropped into my lap, not actually as an inducement but more a meeting of combined respect and enthusiasm for such a pedigree. The deal was done.

A week later I returned to trailer the car home to my workshop, with the order placed for all the items mentioned on the ‘hit list’. Four months later, with the cooling and fuel system completely refreshed, along with a new braking system and suspension parts replaced, and the sun-perished seat fabric re-upholstered, ‘batty’ – as she has become affectionately known – was back in business.

There are still issues, and my immediate desire back in 2002 to restore the car throughout was halted by the originality – and my concern over whether this would be a good move? So instead, with no immediate major rust issues, I became contented to pump her through with Waxoyl to see what would happen – and 13 years later, not a lot.

She does have rust pimples here and there (which is likely to mean bigger rust issues below) and some day she will need some surgery, but meanwhile she is great to drive, and family and friends enjoy the car just as much as I do. With her slim pillars, airy cabin and comfortable Scheel bucket seats, she is a major hit from the inside, while those whose journey might intersect with mine clearly enjoy the outrageous and rather crude aerodynamics.

Being prior to the multi-valve high revving nature that was to come years later, this Paul Rosche-developed, 12 valve, 3.2l engine is strong on torque and refinement – and truly captures the slogan of the time: ‘the ultimate driving machine’. She is comfortable and a joy to drive. Someone was rowing in my direction on the day and the excitement of this find is what remains: being in the right place at the right time!