BMW and the London Symphony Orchestra 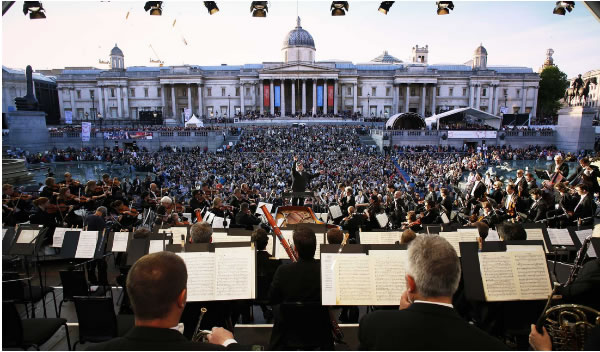 BMW Group and the London Symphony Orchestra have today announced the renewal of their Principal Partnership which each year presents the BMW LSO Open Air Classics in the spectacular setting of London’s Trafalgar Square, free and open to everyone. The renewed partnership will support the Orchestra’s ambition to make great music accessible to as many people as possible, an ambition shared by BMW Group. The concert in Trafalgar Square is part of BMW Group’s open-air concert series – BMW Group also partners with the Bayerische Staatsoper in Munich and Staatsoper Unter den Linden in Berlin.

The LSO has confirmed that Sir Simon Rattle, who becomes the Orchestra’s Music Director in September, will lead the event from the Trafalgar Square stage from 2018. Over the past six years, BMW LSO Open Air Classics has enabled tens of thousands of new people to experience the LSO live in concert and has given hundreds of young Londoners the opportunity to perform alongside the LSO in front of capacity crowds. Supported by the Mayor of London, the annual concert takes the LSO out of the concert hall and right into the heart of the city. In 2017, 50% of the audience was under 35, around a quarter had never experienced live classical music, and the vast majority of the audience – 93% – was completely new to the LSO.

Dr Ian Robertson, (Hon DSc) Member of the Board of Management of BMW AG, said, “Together with newcomers to classical music and seasoned open-air concert enthusiasts, we said thank you and farewell to Valery Gergiev in this sixth year of our partnership with the LSO. Now we are looking forward to continuing the BMW LSO Open Air Classics partnership with exciting, new ideas and Sir Simon Rattle on the conductor’s podium. We welcome him and look forward to next year’s concert in Trafalgar Square.”

Kathryn McDowell, Managing Director of the LSO, said, “The LSO believes that access to great music is for everyone, whatever their age or their background, and through this visionary partnership with BMW we reach an audience almost completely new to the Orchestra’s music-making. We are also able to give a platform to many of the talented young people we work with throughout the year in East London schools, and performing in the spectacular setting of Trafalgar Square is as thrilling for them as it is for the players in the Orchestra itself, and the hugely enthusiastic crowd the event attracts. I’m delighted that the renewal of our partnership will allow this great work to continue under our new Music Director Sir Simon Rattle from 2018, and I would like to thank the BMW Group for their support.”

With access to great music at its heart, the renewal of this partnership will allow the LSO to build on this success, reaching a new and younger audience, and continuing its work in East London schools.

For almost 50 years now, the BMW Group has initiated and engaged in over 100 cultural cooperations worldwide. The company places the main focus of its long-term commitment on contemporary and modern art, classical music and jazz as well as architecture and design. In 1972, three large-scale paintings were created by the artist Gerhard Richter specifically for the foyer of the BMW Group’s Munich headquarters. Since then, artists such as Andy Warhol, Jeff Koons, Daniel Barenboim, Jonas Kaufmann and architect Zaha Hadid have co-operated with BMW. In 2016 and 2017, female artist Cao Fei from China and American John Baldessari created the next two vehicles for the BMW Art Car Collection. Besides co-initiatives, such as BMW Tate Live, the BMW Art Journey and the “Opera for All” concerts in Berlin, Munich and London, the company also partners with leading museums and art fairs as well as orchestras and opera houses around the world. The BMW Group takes absolute creative freedom in all its cultural activities – as this initiative is as essential for producing groundbreaking artistic work as it is for major innovations in a successful business.

With its four brands BMW, MINI, Rolls-Royce and BMW Motorrad, the BMW Group is the world’s leading premium manufacturer of automobiles and motorcycles and also provides premium financial and mobility services. As a global company, the BMW Group operates 31 production and assembly facilities in 14 countries and has a global sales network in more than 140 countries.

The success of the BMW Group has always been based on long-term thinking and responsible action. The company has therefore established ecological and social sustainability throughout the value chain, comprehensive product responsibility and a clear commitment to conserving resources as an integral part of its strategy.