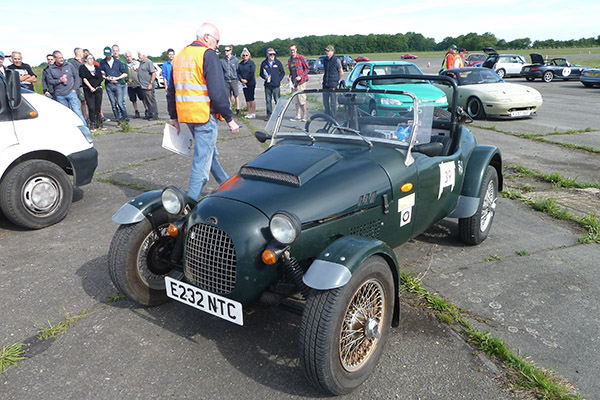 George Champ, Regions Director And East Anglia Regional Chairman
This month I am taking the unusual step of writing about something of which I know very little, OK I can hear the jokers amongst you saying so ‘what’s new about that?’. What I am setting out to achieve, is to promote a new dimension for club members to enjoy, so this is where you will need to accept possibly a few inaccuracies on my part.

I was recently introduced by Neil McDonald to Brian Hemmings, who is involved in promoting the MSA (Motor Sports Association) throughout East Anglia. The MSA are the national governing body for Motorsports in the UK ranging from F1 all the way down through every aspect of Motorsport including Races, Rallies, Trials, Treasure Hunts through to club level events such as Autotests and Autosolos which is where I begin my story.

The MSA are the main umbrella body as I say, and we, the BMW Car Club are registered with them, as well as many other car clubs, and need to follow their rules and regulations to ensure we comply with all we are supposed to and are covered by their liability insurance and granted a permit to hold an event. The insurance covers third party liability as well as possible personal injury to the marshals.

I was invited to attend as an observer (actually signed on as a marshal in order to be adequately covered insurance wise) to an Autosolo event on 4th June at Wethersfield Airfield run by the West Suffolk Motorsport Club who operate under the same MSA umbrella as ourselves.

From here on in I will list some of the basics of the events put on in the East Anglian area and fingers crossed I have covered all the angles :

It was great to see everyone having such a great time and again as you will see from the list shown nearly fifty people attended in a variety of cars.

You will hopefully want to use your BMW for an event (check your insurance cover but you will as I say have some form of cover under the MSA scheme)  Although on this particular occasion there were no BMWs taking part Brian told me that the Anglia  Championship was indeed won by a 320  and BMW Compacts can be very competitive in the right hands.

The list attached will also show the types of vehicles mainly used and indeed I was told that one competitor had even purchased three Nissan Micras to be used within his club all for 750 so it is easily an affordable sport.

Within my own East Anglia Region we firstly need to cement a relationship with other clubs such as the West Suffolk Motorsport Club, Eastern Counties Motor Club, Cambridge Car Club and the Sporting Car Club of Norfolk. As we are an MSA registered club our members can enter any of the events put on by these other MSA registered clubs. After which if we wish the MSA would assist us in perhaps setting forth and running an event of our own.

I cannot stress too highly the amount of fun and enjoyment everyone had at the event I attended. However, first we must learn to walk before we think about moving up the scale to get involved in Rallies and beyond although we are already adequately served by our own Trackday team. Another idea is perhaps to consider running an Autosolo event on the same date and venue as one of our Trackdays.