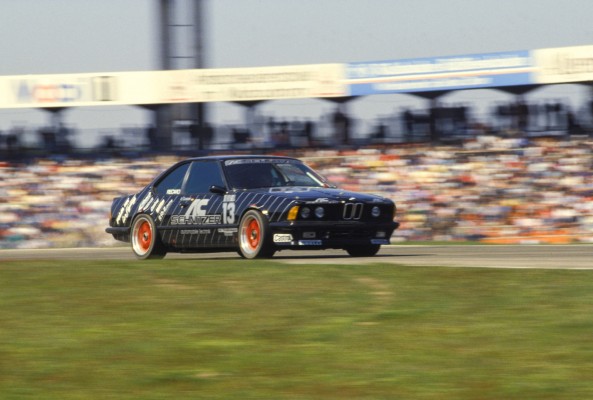 AC Schnitzer has enjoyed a very close relationship with BMW over the years, both in motorsport where they have won many major titles together, but also as a supporter of BMW’s production vehicles, owning a BMW dealership as well as providing quality tuning products for the BMW range via their tuning arm AC Schnitzer – enjoy!

AC Schnitzer was founded by Willi Kohl and Herbert Schnitzer in 1987. They located the dealership and workshop on Neuenhofstrasse, Aachen, alongside parent company Kohl automobile GmbH (the ‘AC’ in the company title stands for Aachen, which is why a lot of people drop the ‘AC’ to ‘Schnitzer’). The company launch was subdued, typically German in fact – after all, they had nothing to celebrate at the company’s inception. But a few months later they announced themselves and their products to the motoring world with the launch of the BMW E32 based ACS7 at the Frankfurt Motor Show, the very first AC Schnitzer conversion.

Schnitzer had already been very active in motorsport for years; many will remember the various 2002s and CSLs carrying Schnitzer sun strips and the like. By the time AC Schnitzer was launched, Anton Goeser was piloting a Schnitzer-liveried BMW 635CSi in the German Touring Car Championship (DTM) in 1987 (see photo), and the first few races in 1988 before switching to a Schnitzer-prepared E30 M3 for the rest of the season. Motorsport was a good ‘vehicle’ to promote the AC Schnitzer brand, and tuning parts and racing proved to be excellent bed fellows as the company looked to promote the AC Schnitzer name far and wide… 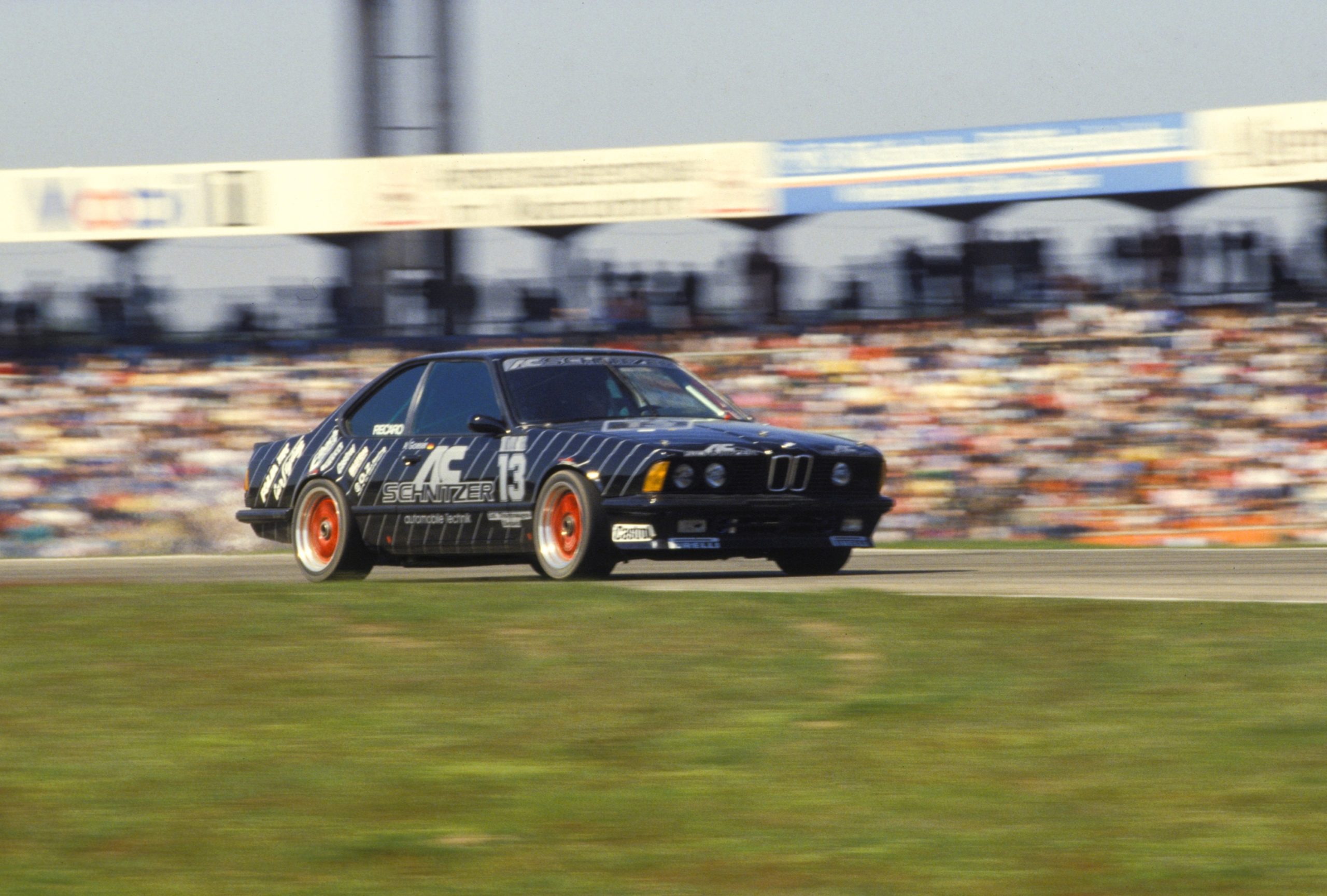 1989 saw another Schnitzer world premiere, one that would put the company right on the BMW tuning map when they presented the road-going version of the AC Schnitzer ACS3 Sport based on BMW’s E30 M3 at the IAA Frankfurt (Motor Show) to enormous acclaim. The mechanical parts had already been well tested in the rigorous world of motorsport the year previously, so the Schnitzer engineers knew the parts were robust, reliable and just as important, worked! BMW’s E30 M3 was already proving to be very popular with customers. It was winning races and in road car format it was proving to be the darling of the motoring press, so a modified version which did everything an E30 M3 did but better was bound to cause lots of interest and excitement. For years after the M3 became obsolete in top line motorsport, the tuning and suspension mods for the E30 M3 kept AC Schnitzer at the forefront of BMW tuning and in the psyche of all BMW enthusiasts, especially with their links to the track day crowd and through Rossiters here in the UK… 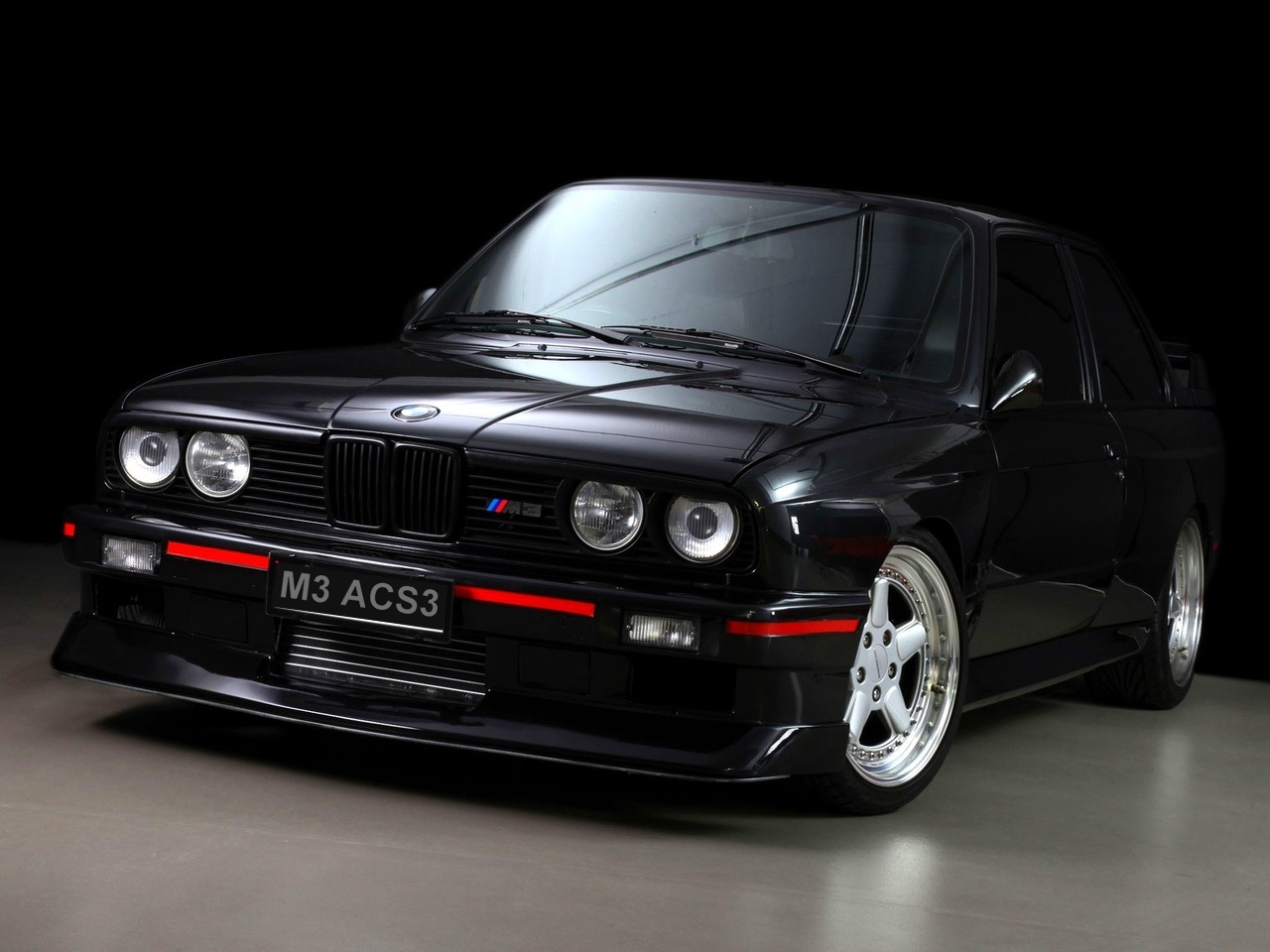 1991 – BMW’s E36 3 Series models had only been leaving the production line for a few months and yet we had another Schnitzer world premiere. At the IAA Frankfurt (the Frankfurt Motor Show is held every two years) AC Schnitzer unveiled the dramatic ACS3 Silhouette 3.0 (based on BMW’s E36 4-door 325i) to a gasping audience. The motoring press was equally stunned. They were still coming to terms with BMW switching from the conservative and popular E30 to the more aerodynamically-styled E36 line, and here was Schnitzer bringing a tuned version to the world’s press, an age before BMW launched the 3-litre E36 M3…

If 1992 had been relatively quiet for the company, they really stirred the motoring world up in 1993 with the world premiere of the outrageous AC Schnitzer ACS3 CLS (Coup Lightweight Silhouette) based on BMW’s E36 M3 3-litre. Again Schnitzer had beaten BMW to the punch, the CLS launching way before BMW would showcase the E36 M3 Evo. The CLS was a different beast entirely to the forthcoming Evo, though, being far more extreme both visually and performance-wise.

The CLS was again launched at the IAA Frankfurt – the company was getting to be a dab hand at these Frankfurt launches. They fully understood where they would get the ‘biggest bang for their buck’ launch-wise and Frankfurt was the place. It was right on their doorstep and just happened to be one of the most important car shows on the planet attended by the world’s motoring press…

In 1995 it was IAA Frankfurt time again. AC Schnitzer gave the world premiere to the equally outrageous CLS II, again based on BMW’s E36 M3 and it was even more outrageous than the original CLS – this was like Schnitzer’s ‘Sport Evo’ version!!

In the same year, Windows 95 was launched, terrorists released Sarin Nerve Gas at Kasumigaseki station, Tokyo, killing 12 and hospitalising over 5,000, OJ Simpson was found innocent and Toy Story, the first ever wholly computer-generated film was released. 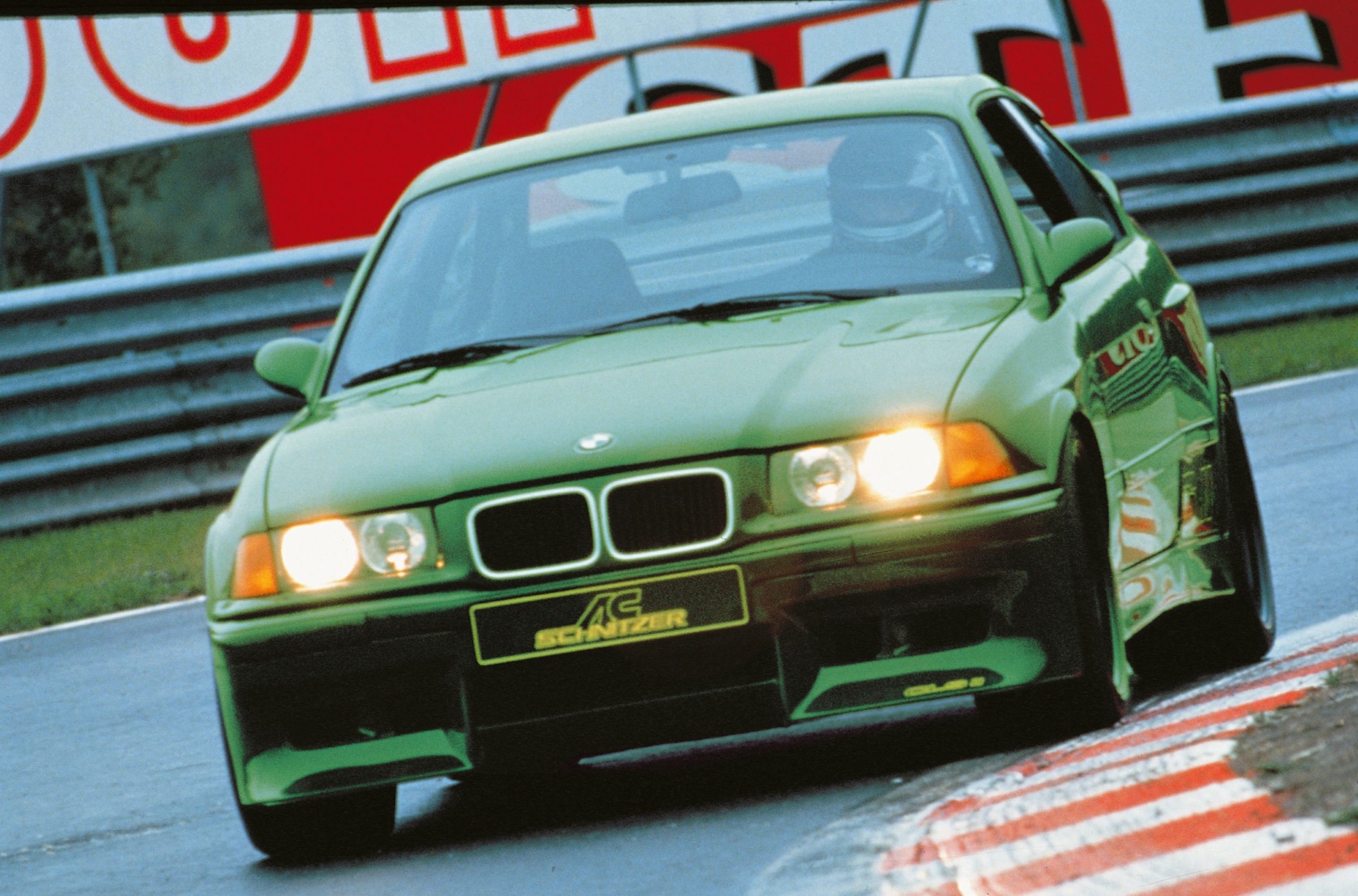 February saw the IRA detonate a bomb in the Docklands area, London, in March the Dunblane Massacre take place, Prince Charles and Diana, Princess of Wales were divorced, the IRA detonated another bomb which devastated Manchester city centre, DVDs were launched in Japan, the Summer Olympics were held in Atlanta and Dolly the Sheep, the first cloned mammal, was born.

1997 was a milestone year for the company as it celebrated its 10th birthday. They marked the occasion with the release of a special edition model which was limited to just 10 vehicles: the AC Schnitzer ACS3 3.2 Compact “10 Years Limited Edition” (based on BMW’s E36 Compact).

September also witnessed the world premiere of the AC Schnitzer Z3-based V8 Roadster at the IAA Frankfurt. It was the first Z3 to be fitted with a V8 engine, mirroring the BMW 507 all those years ago, and again beat BMW to the punch who two months later would launch a concept V8-engined roadster, the BMW Z07 Concept (Z8 concept car) at the Tokyo Motor Show… 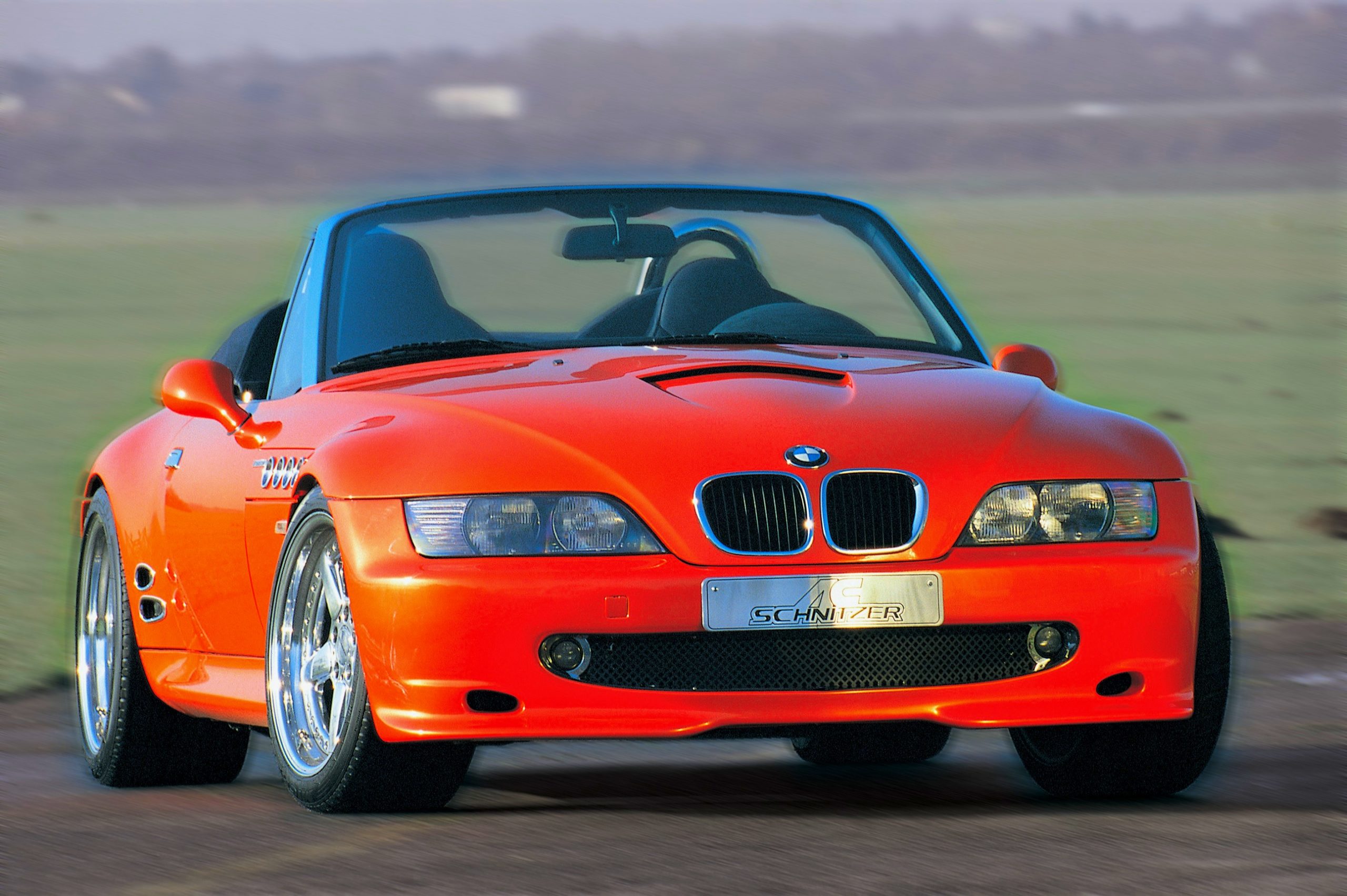 1999 and the ACS3 A.R.T (Advanced Racing Techonology) based on BMW’s E46 3 Series Coup celebrated its world premiere at the IAA Frankfurt.

The world’s population exceeds 6 billion for the first time, PCs around the world ran testing for the millennium bug, the minimum hourly wage was introduced in the UK, Walmart purchased Asda, Putin succeeded Yeltsin as Russian President and parties commenced around the world at midnight on 31st December as the new millennium dawned…

2001 and it was IAA Frankfurt time again with the world premiere of Schnitzer’s very first BMW SUV in the shape of the X-ROAD, based on a BMW X5. This was a toe-in-the-water job for Schnitzer, who have never really ‘attacked’ the 4×4 market with any real enthusiasm, although of course like all BMW tuners they carry the obligatory wheels and other goodies for the X-range of BMW vehicles. 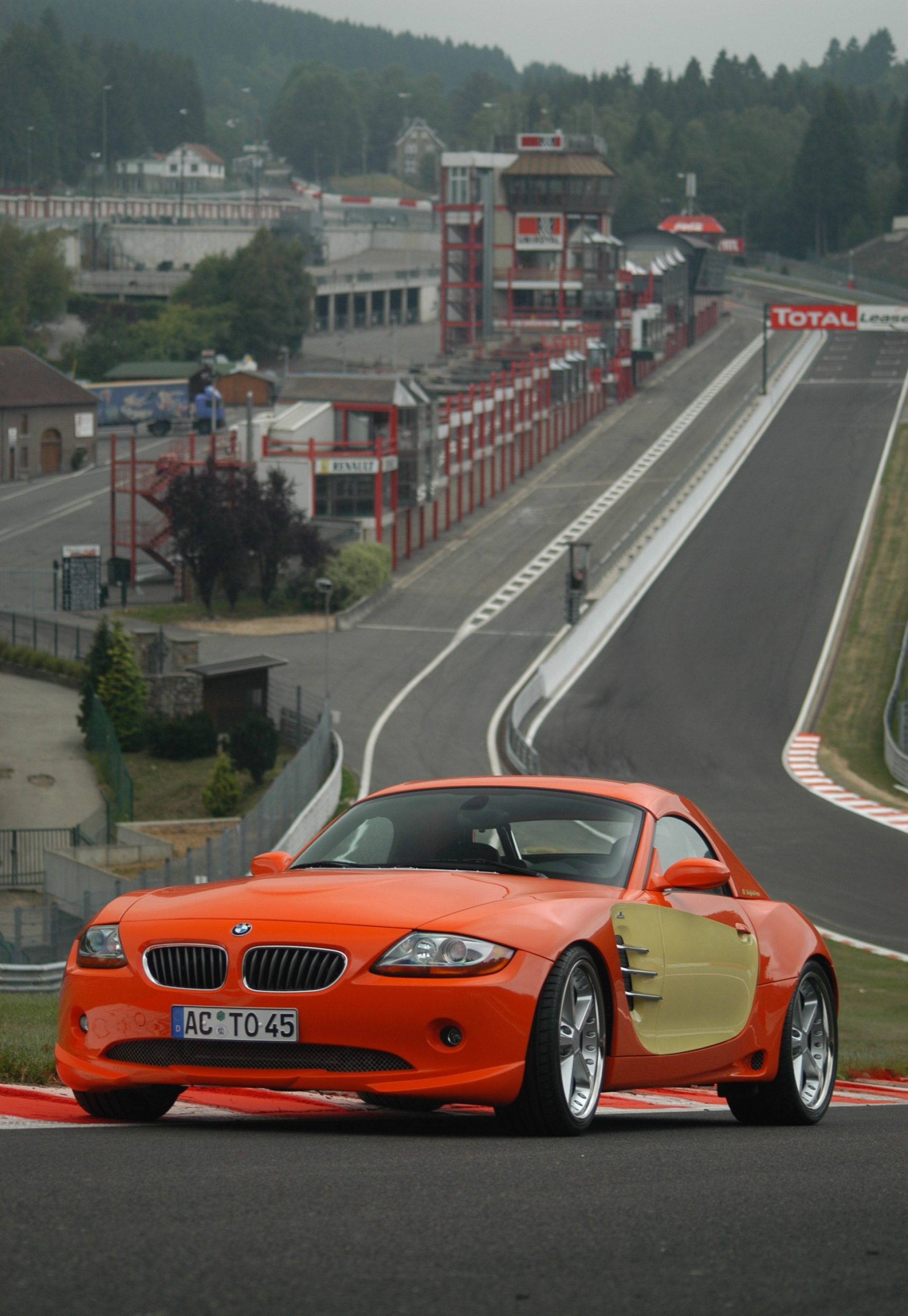 The 2005 IAA Frankfurt Show sees AC Schnitzer launch Uber Coupe ‘TENSION’, based on BMW’s E63 M6. A few weeks after its world premiere, TENSION broke a world record at the Nard circuit with a top speed of 331.78 km/h (or 206.15mph in pounds shillings and pence), making it the fastest road-legal BMW ever. 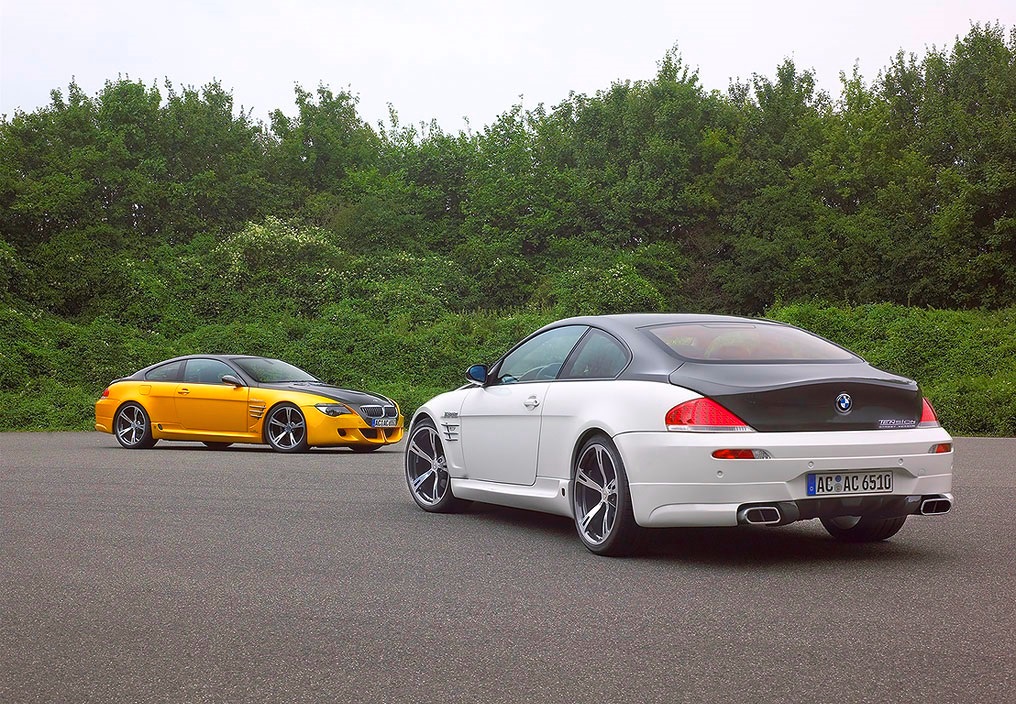 2006 saw AC Schnitzer launch the gorgeous ‘PROFILE’, which was based on BMW’s Z4 M Coup. With 365hp from the S54 engine, PROFILE could top 177mph. In the same year, North Korea test-fired missiles over the Sea of Japan somewhat ironically on 4th July and exploded a nuclear device in the North Korean mountains – now where have we heard that story recently… 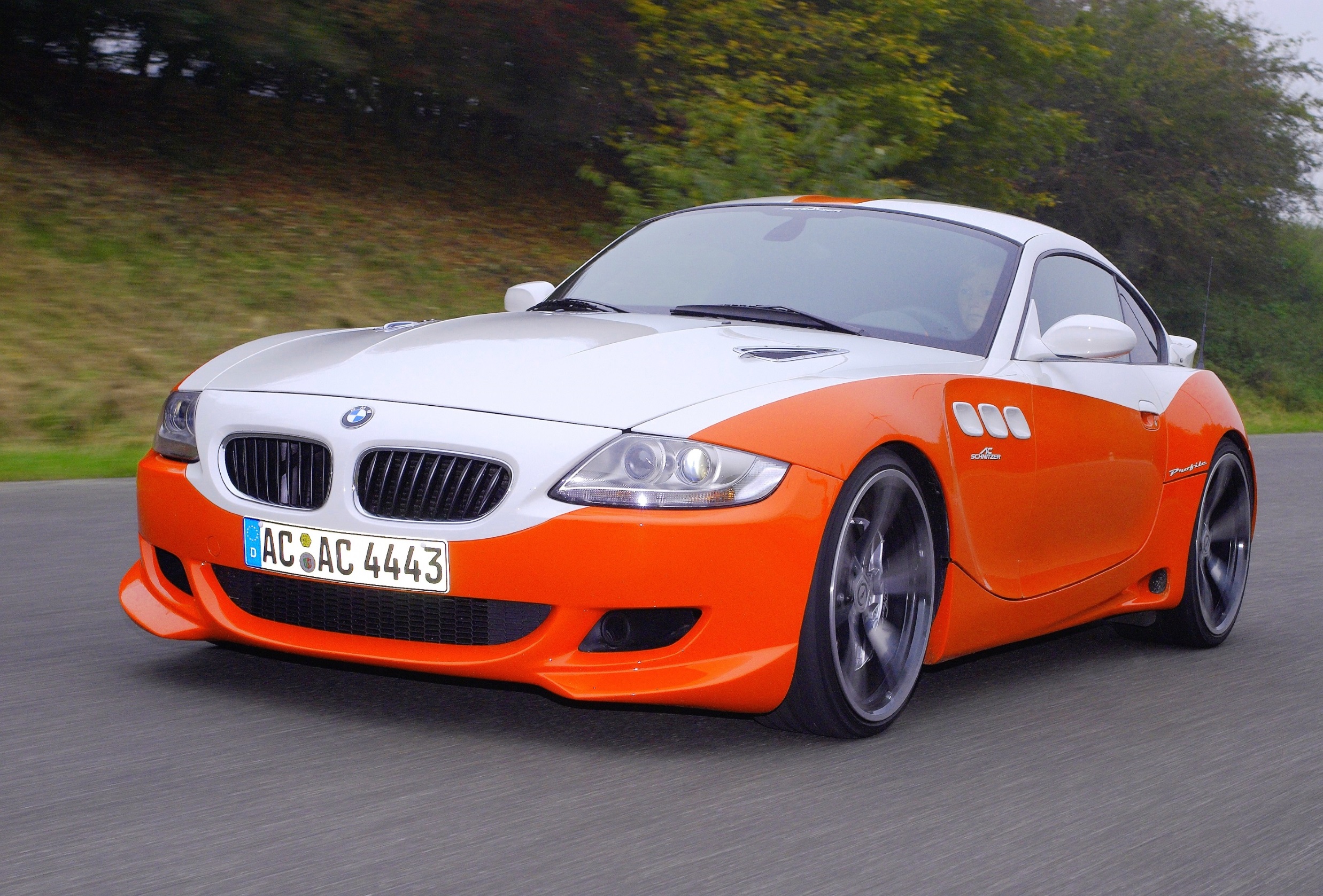 2007 and it was back to Frankfurt for the IAA. AC Schnitzer surprised everyone by heading down the environmental route with GP3.10, the LPG-powered E92 Coup. GP3.10 was powered by the V10 M engine from the E60/3 M5/6, tuned to run on LPG. The M V10 produced 555hp, enough for the car to reach a new world record for LPG cars at the Nard proving grounds with a top speed of 197.65mph.

Gordon Brown replaced Tony Blair as the prime minister of Great Britain, and Romania and Bulgaria joined the European Union… 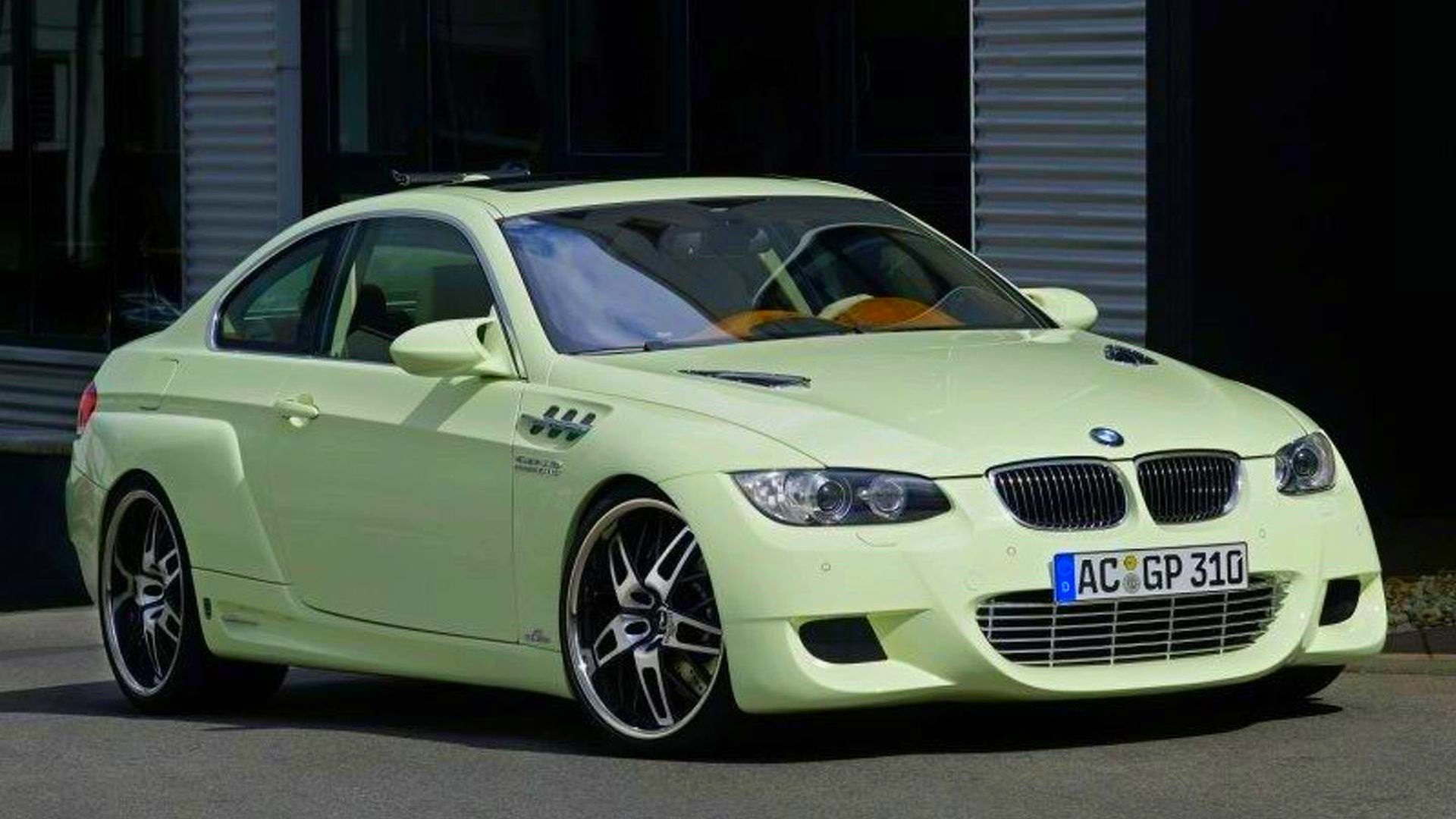 Barack Obama was sworn in as 44th president of the USA and water was discovered on the moon.

In 2011 AC Schnitzer decided to have a change of location for their launches, attending the Geneva Auto Show in March with a knockout stand where they premiered the 99d Roadster, based on the new E89 Z4 with 99g CO2 emissions, hence the model name. The 99d Roadster utilised the same (heavy) folding metal roof as the OEM Z4, yet tipped the scales 230kg lighter, thanks to Schnitzer’s engineers utilising lots of carbon fibre, magnesium and titanium in the build. Weight was also saved by utilising lightweight materials in the exhaust, braking system and 19″ Type VIII forged wheels. The car still retained its sporting edge though, with power from the 320d-derived engine up from 163hp to 190hp, enough to sprint to 60mph in 6.7 seconds before running out of steam at 146mph…on a good day.

2012 and AC Schnitzer chose the Geneva Auto Show again to premier the AC Schnitzer ACS5 Sport, based on BMW’s F10 M5. This was basically a conversion for the F10 M5 which consisted of a whole host of Schnitzer-developed goodies in a kit, including huge 21″ Type VIII forged wheels and a 620hp upgrade that allowed for a genuine 190mph top speed. All for the trifling sum of 27,995!!

AC Schnitzer also announced that its products were available in 50 countries worldwide for the very first time.

The summer Olympics opened in London and President Obama was re-elected. 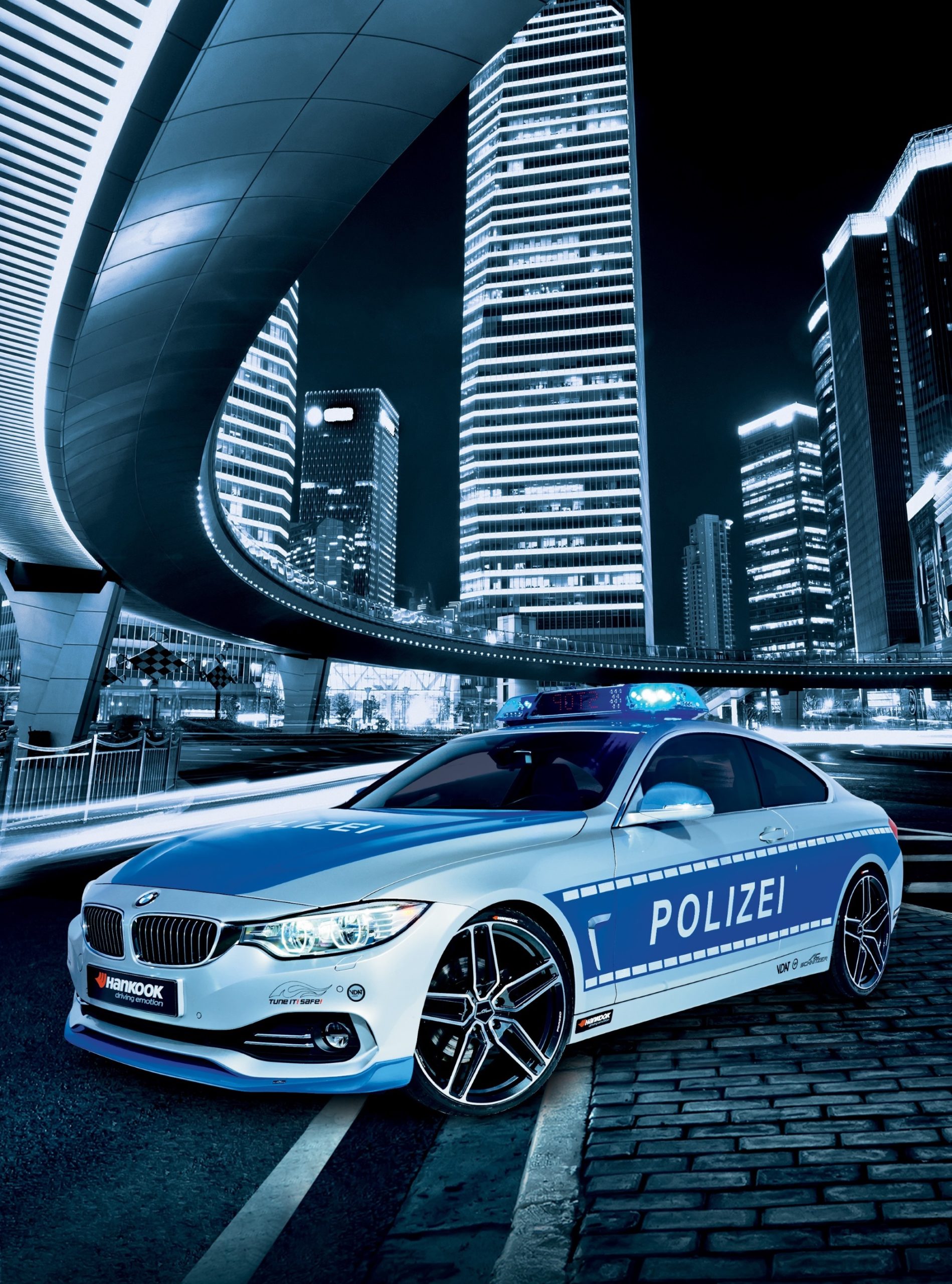 In 2014 AC Schnitzer released a tuning program for the Range Rover Sport for the very first time, followed later in the year by the TUNE IT! SAFE! Police BMW X4 by AC Schnitzer, based on BMW’s X4 20i, the fourth TUNE IT! SAFE! campaign car built by the company.

In September, Scottish voters opted, 55% to 45%, to remain part of the United Kingdom in the Independence Referendum.

2015 was a busy year for the company, with the world premiere at the Geneva Motor Show of the X6 by AC Schnitzer and their interpretation of the i8, as well as the launch of the ‘AC1 wheel generation’ range of forged racing alloy wheels.

To round the year off, the company took the ‘M4 by AC Schnitzer’ (based on a BMW M4) to an event organised and attended by most of the big guns in the German tuning world at Hockenheim’s ‘club’ or short circuit, where it posted the fastest lap time of the day set by a BMW with a best of 1:09.20 minutes. 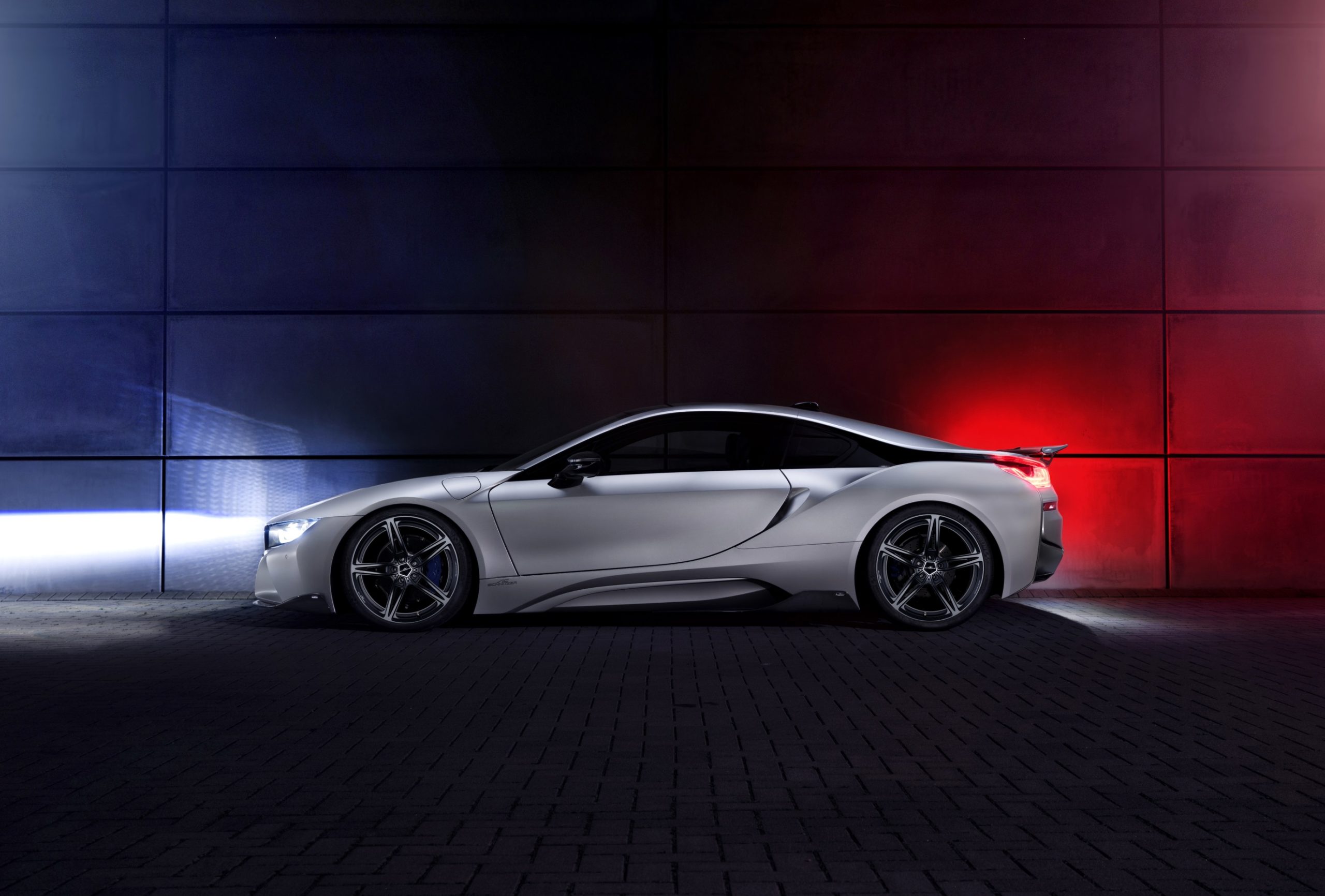 2016 and the motoring world gasped at Geneva with the world premiere of AC Schnitzer’s mean, green (BMW M235i-based) ACL2, a concept car that actually works, being far quicker than a Porsche 911 GT3 around any circuit on the planet!

The company also set the fastest time for a diesel around Hockenheim with the outrageous 150d, with a time of 1:13.80 minutes, and they also found time to give a world premiere to the M2 by AC Schnitzer – the fastest M2 on the Sachsenring, posting a time of 1:32.90 min, which put into perspective is a quicker time than those for BMW’s M4 GTS and Porsche’s 911 Turbo and GT3!!! 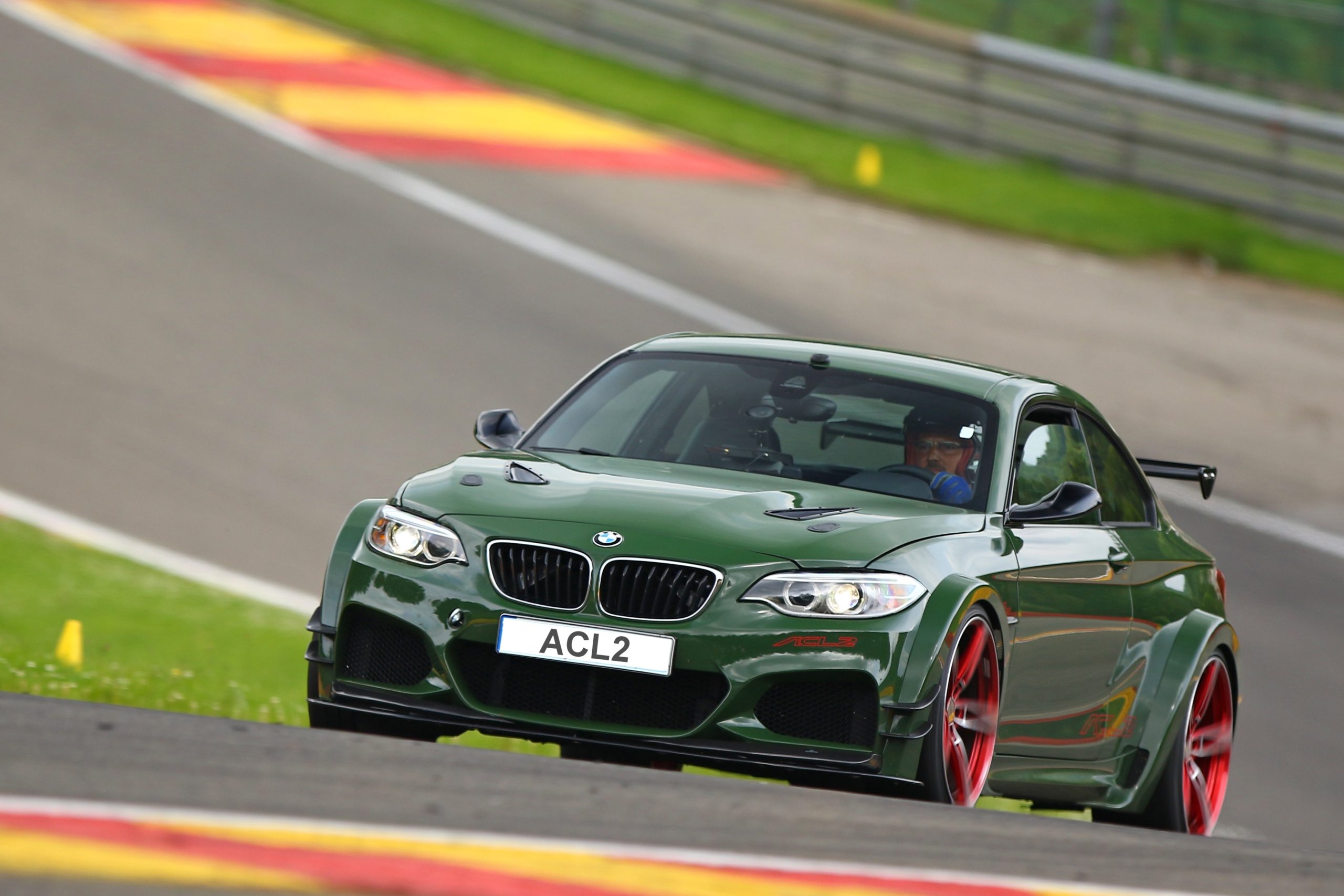 As we enter 2017 and join in the celebrations for AC Schnitzer’s 30th birthday, you can guarantee they won’t be resting on their laurels. As if to prove it, they blew the opposition out of the water by setting a time of 1:33.90 at the Sachsenring in their ‘M3 by AC Schnitzer’, making it not only the fastest ‘tuner’ M3 but also the fastest (4-door) saloon car to lap the Sachsenring.

They also gave a world premiere to the ACL2S at the Geneva Motor Show, where they announced that 30 ACL2S models would be built as a limited anniversary edition based on the BMW M240i.

And it’s not only their UK fans who appreciate the company’s blend of quality and performance. For 12 times in a row AC Schnitzer has been selected by the readers of “Auto Motor Und Sport” magazine as the ‘Best BMW Tuner’, while the readers of “Sport Auto” have confirmed that AC Schnitzer is the tuning master by voting them the ‘Best Engine Tuner & Best Optical Tuner’ for the past 12 years – enough said. Happy 30th birthday AC Schnitzer! 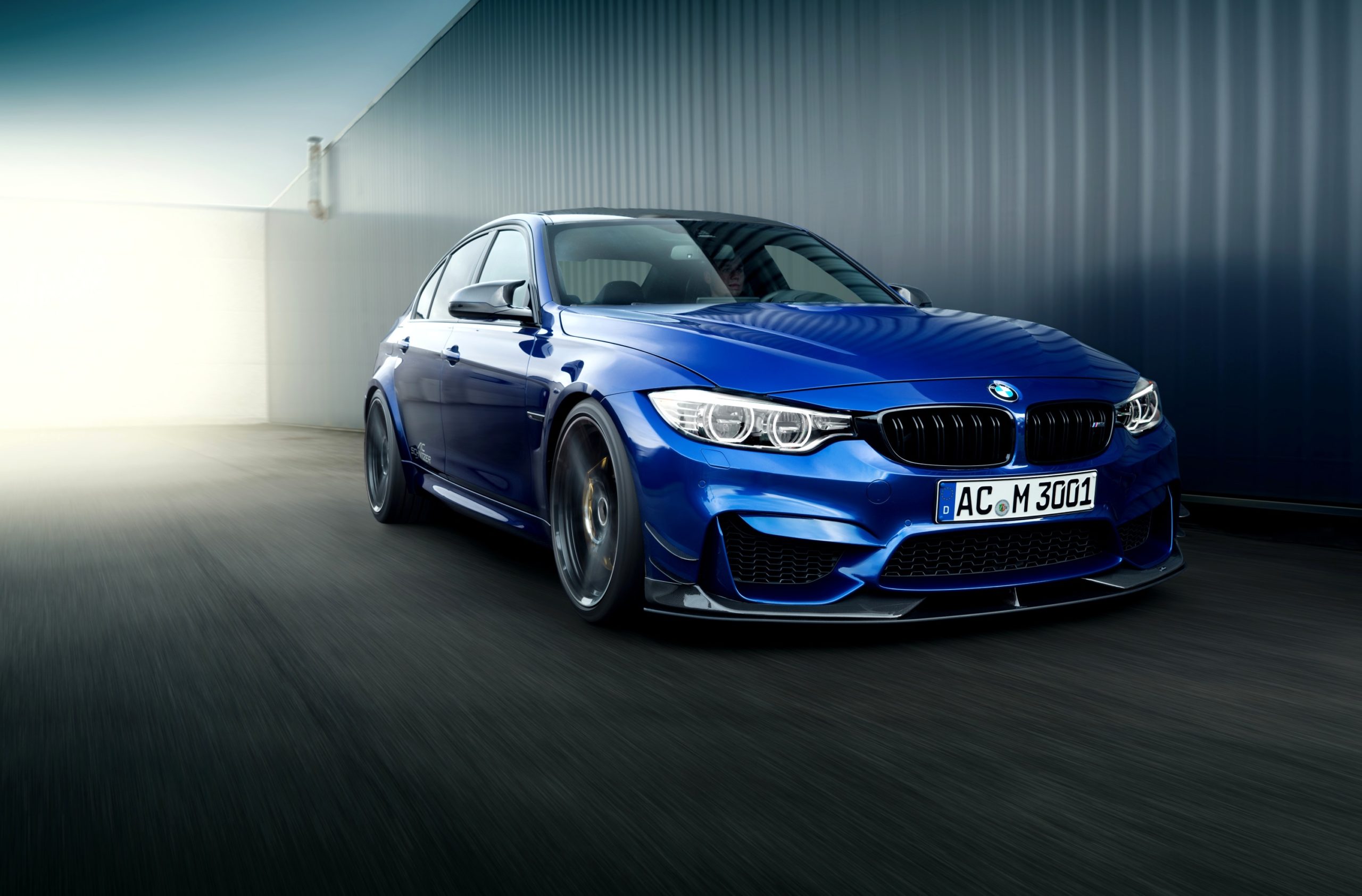