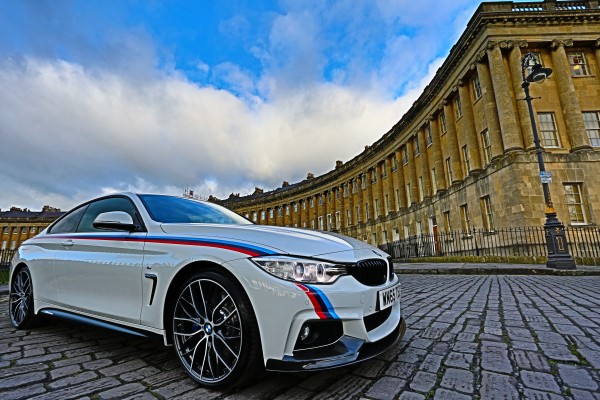 This stunning coupe grabbed my attention during a routine visit to our local dealer BMW Wellsway of Bath. It was ‘suited’ in exterior Solid Alpine White and interior Black Dakota Leather, and without any further clothing it looks stylish and eye-catching. But this exquisite motor was ‘booted and spurred’ with striking BMW performance parts.

For the record, the Motorsport kit comprises the Double Spoke M Sport 405 20″ alloy wheels (perched on Pirelli P-Zero run flat tyres), carbon fibre front splitter and black grille, carbon fibre rear spoiler and rear diffuser, M Performance side decals and BMW Motorsport Colour Lines (the trademark stripes). A real head turner extraordinaire helped by the M Sport braking system that improves the lustre of the diamond-cut 20″ alloys. And it passed the litmus test of Marie when I surprised her with a test drive. So on our return to the dealer the next question was, “When could I collect the car?”

However, I was about to part company with my superb BMW 325d M Sport Gran Turismo that had had valedictory reports grace the pages of this magazine. The 3GT had done a sensational job as an all-round 5-door fastback. However, my commute had changed from 120 to 15 miles and I missed the hustle of the coupe chassis mated to some grunt under the bonnet. So there lay another dilemma, as my three previous BMW coupes were ber fast 3-litre oil burners and how would this 2-litre gasoline guzzler stand up to scrutiny?

Well, the spec sheet says that the 428i engine belongs to the N20 straight-four family, and since 2011 in turbocharged guise it replaced the N52 and N53 straight-six engines, as it produced similar horsepower to its predecessors with greater lower-end torque and better efficiency. The jargon says it features a twin-scroll turbocharger, variable valve timing (which as BMW aficionados know is called VANOS), variable valve lift (aka valvetronic) and direct fuel injection.

On paper, the coupe can stretch its legs 0-62 mph in 5.8 seconds courtesy of the rated horsepower of 245 PS and torque of 350 Nm, allegedly delivering 44 mpg and CO2 of 145 g/km through the delicious

8-speed Sport Automatic (also fitted to the 3GT). I can testify to the pace of the coupe as the horizon closes with immense ease and the driver is rewarded with silky smooth turbine power matched by an exhilarating cacophony of sound. As we all know, official consumption figures are rarely matched on real roads, and this coupe is no exception. That said, over the last six months, depending how much lead is in my boot, consumption hovers between 70-80% of the official figures, which is impressive enough considering this coupe is more about ‘open road’ sporting prowess rather than ‘urban’ frugalness.

As for the driving experience, the endearing feature is that every new BMW has the usual familiarity and dj vu of the previous chassis and dashboard. After all, the ‘ultimate driving experience’ tag line comes from the ergonomics of the driver’s cockpit and legendary handling pedigree of the very stable and balanced chassis.

For driver comfort, the automatic dimming exterior folding mirrors and electric front seats with driver memory complement the standard heated front sport seats. The infotainment was upgraded to the awesome Harman Kardon surround loudspeaker system that complements the standard DAB digital radio and USB audio interface, and BMW Professional Plus with satellite navigation and heads-up display with full black panel display. This is my first experience of a built-in satnav as I had previously settled for the basic media package. But I am now a convert as it seamlessly improves the driving experience and helps me better manage my journeys. And yes, I have used the concierge service and the real-time traffic certainly brings realism to arrival times and congestion avoidance.

Other worthy standard features are the front and rear park distance controls, the rain sensor with automatic headlight activation and xenon headlights that come with headlight washers. I miss the optional extra of the active headlights and headlight assist of the 3GT, but this is more than compensated by the other driver aids such as the satellite system and heads-up display.

And last but not least, Timothy Hill, a freelance photographer and a BMW Product Genius at Wellsway BMW, took the magnificent photographs of my car. He expertly used the backdrop of the Royal Crescent in Bath to add gravitas to the finished article. A job well done.

So, there you have it. A superb chassis mated to an eager but frugal four-pot petrol engine with the driver cosseted in the best cockpit in town and a car that looks the business. Joy is a BMW 4 series coupe. 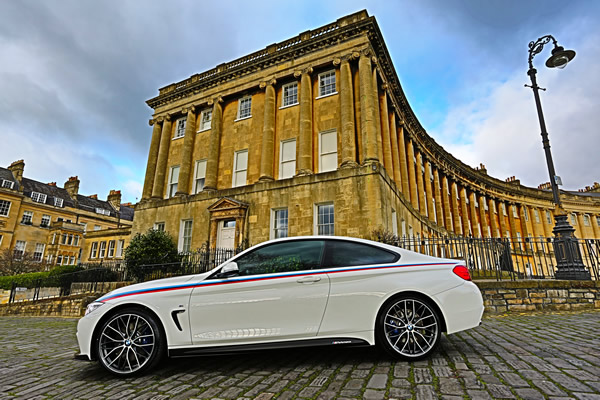