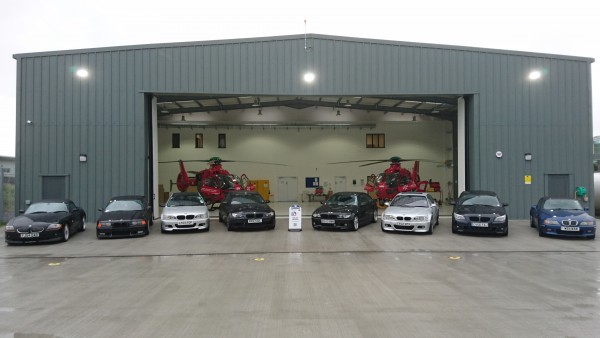 As soon as the idea of fundraising was mentioned for the BMW Centenary, it was like a fire in my brain! I had always wanted to raise money for charity, but I had never had the incentive before, to get me off my backside and do it! Although the BMW Car Club GB were raising money for their own three chosen charities, I had always wanted to raise money for our local Wales Air Ambulance, especially with my late father’s connections with the emergency services, before he was killed in the fire service when I was only five years old.

I proceeded to contact the WAA as soon as I could, and Paul Canning, who is in charge of the charity, got back to me and obviously welcomed the idea of us raising money for them with open arms. He gave me some information, help and a few pointers, and sent me some WAA stickers for collection buckets etc, along with a letter of authority in the post, to prove we were officially raising money on their behalf, between the months of March and August 2016.

The Wales Air Ambulance is a charity providing vital emergency air cover for those who face life-threatening illness or injuries. Their aim is to reach, treat and transport patients with the greatest speed possible to the most appropriate hospital for their needs. The service has carried out over 24,366 missions to date since its launch on St David’s Day 2001.

A pilot can have the helicopter airborne within three minutes of receiving an emergency call. The aircraft can travel at 150mph – over two miles per minute, and can reach anywhere in Wales within 20 minutes. The Wales Air Ambulance responds to roughly 2,000 missions every year; around 400 of these are paediatric missions (children under 16 years), and approximately 30% of missions are to road traffic collisions.

Treatment within the ‘Golden Hour’ improves the chances of a patient’s survival and early recovery. A helicopter has the capacity to carry one pilot, two paramedics and one patient. They also have a spare seat that can carry an additional medical practitioner, or the parent of an injured child. The helicopter can land next to a patient, saving valuable time in areas a land ambulance cannot reach. It is the only aircraft that can land on a road or even a back garden.

The cost of running the service across Wales is over 6 million per year, and each mission costs approximately 1,500 So at least the amount that our efforts went to, will fund about one and a half missions, which of course could make all the difference between life and death! As a registered charity the service is wholly dependent on public donations, and does not receive any support from the national lottery or the government. This is another reason why I wanted to support this worthwhile cause.
I started to collect cash donations at first from people with collection buckets, and also approached my factory boss for a sum. Then after raising about 600.00, I thought I would organise a raffle to boost funds, so I swiftly got in touch with all my usual sponsor contacts that have been so kind to me in the past with goodie bag freebies etc, and they were more than happy to help with prizes for the raffle. In fact I managed to get hold of 20 prizes in total, including some bits I had accumulated over the last couple of years and not used yet.

As Michelin already sponsor the BMW Car Club GB and offer discounts and good deals on tyres, I thought I would approach them too. I’m so glad I did, as they sent me 20 Michelin branded rucksacks including goodies for our BMW Centenary Relay, AND offered me a set of four Michelin tyres for the raffle, which I used as the first prize in the end as it could be worth so much in value. I was also lucky enough to receive a 300 Wheel Refurb voucher from the Wheel Specialist (Swansea), which I used as second prize.
When I gave the rucksacks out to the boys in our Region who took part in our BMW Centenary Relay, I asked them if they would like to make a donation to our charity at the same time, in return for the quality Michelin merchandise I had supplied to them. Which they were more than happy to do, and most of the boys were very generous with their contributions too, as they really appreciated the effort I had put in up until now.

As soon as I had found a competitively priced printing company for the raffle tickets, I got them designed and printed out ASAP, as I knew I had a few shows coming up soon that I could sell the tickets at. Once I received the 2,000 raffle tickets, I asked our Region’s members if they would be prepared to sell ten books each to friends and family, to boost our fundraising total, and again they were more than happy to help. I also asked colleagues in work with me, and quite a few agreed to sell them to help me raise as much as I could.

Over the next couple of months, all I seemed to focus on was raising as much money and selling as many raffle tickets as I could. My partner was very patient with me, so I must thank her too for being as understanding as she was. I even started to contact my Facebook friends on Messenger in my spare time at home, explaining what I was doing and offering to fill out tickets for them and send them photos of the stubs, if they would be so kind as to send me payment via Paypal. I have to say that method was a great success too.

I had a personal goal from day one of raising 2,000.00, and was determined to succeed, more than I have ever been determined before! Even when ticket sales slowed down and donations had stopped, I persevered and kept on going, and it soon started to pay off. People who were helping me started to give me their stubs and cash back, and our total was increasing all the time. I was putting regular updates on our Facebook page, informing everyone of just how well the fundraising was going, and I could see our total getting higher and higher.

I am so pleased to say that we reached a staggering 2,120.00 just days before the raffle was due to be drawn, so I was really chuffed and proud, and could sit back and relax a bit then! The raffle was drawn on Wednesday 3rd August at our twice monthly meet at the Twelve Nights Pub in Margam. I asked the pub manager if he would be an independent and draw the tickets out for me, which he accepted.

Unfortunately, nobody that turned up to the draw that night actually won anything, nor did any members of our Region of the Club, but I notified the top five winners by phone and then all the remaining other winners by the following day. Everybody who won a prize said they’d never won a prize before, but I think most of us can agree with that too!

I can honestly say that the whole fundraising experience has been a learning curve on my part, and I’m not sure if I would personally do it again to be honest, as I’ve realised how hard it has been, nagging people all the time and you feel like you’re getting on their nerves. You also realise that people would walk past you all day long and not buy a raffle ticket from you unless you actually approach and ask and them if they would, then most people do without question! It’s really strange!!

On Saturday 3rd September I had managed to gain the interest of eight of our members, and presented the cash we’d raised to the WAA crew members at their new Wales Air Ambulance HQ at Llanelli. We also had a photo shoot of our cars, ourselves, the helicopters, crew and the big cardboard cheque (which our Ian’s wife Angela had used her calligraphy skills on, to expertly write and fill out all the details lovely and neatly). Thank you again to Ian and Angela for that! Also a big thank you to WAA crew members Jeremy and Jason, for making us feel really welcome at the site! Cheers guys!

So I can now cross the charity fundraising off my ‘bucket list’ and safely say that’s done and dusted! Now I must take this opportunity to thank everyone from the bottom of my heart, who donated generous cash amounts, also all the people who helped to sell our raffle tickets, and of course a huge thank you to everyone who bought our raffle tickets, taking our WAA grand total again up to 2,120.00. Plus massive thanks from me must go to all the companies who kindly donated raffle prizes, because without them there wouldn’t have been a raffle! Also for all the help and communication from the Wales Air Ambulance throughout our charity fundraising from start to completion!

Please see the list below of prizes, the companies that donated them and the raffle prize winners! Cheers guys!