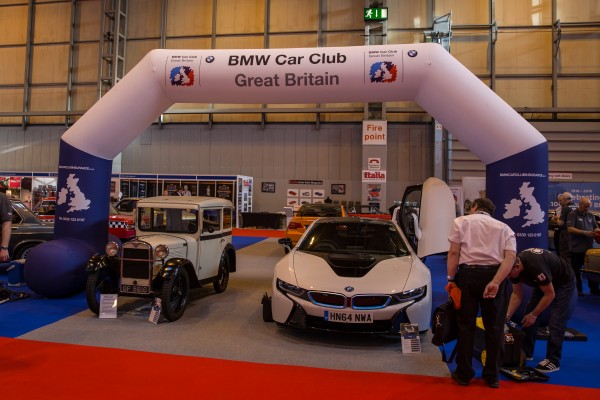 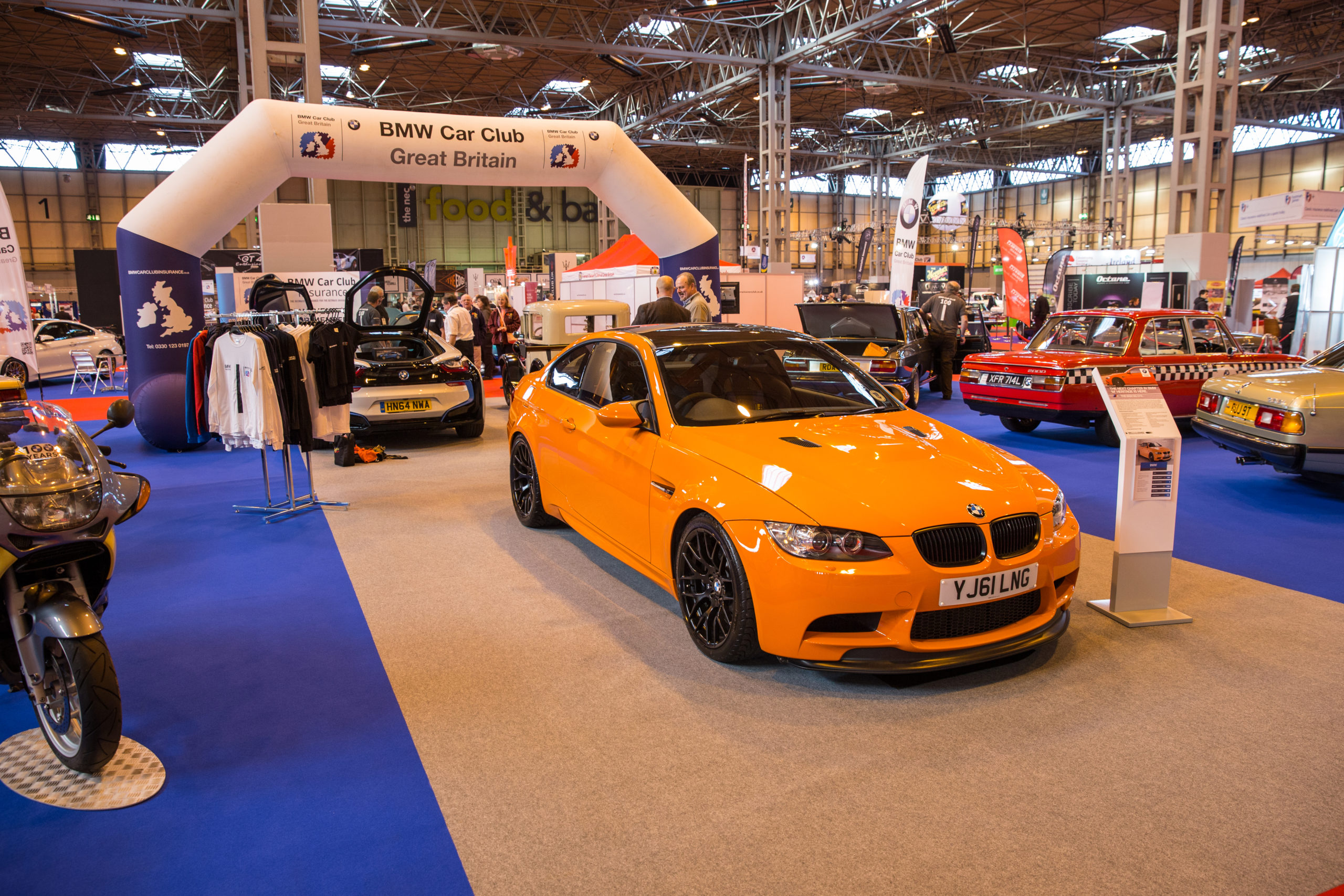 The Lancaster Insurance sponsored Classic & Sports Car motor show was held over the weekend 11th – 13th November at Birmingham NEC and is the UK’s biggest indoor classic car event, attracting some 70,000 visitors from far and wide. In addition to FIVE halls with hundreds of Car Club displays, manufacturers’ stands, cars for sale and traders galore, there are other key attractions including technical talks from the Wheeler Dealers and Silverstone Auctions – so plenty for the enthusiast to enjoy.
For our part the organisation for this show starts months in advance and I was delighted to be asked by Dave and Jan to help them this year. In June / July we decided that to continue the Club’s Relay with car models theme it would be good to have the real cars as our main feature. So, a quick word with the BMW Historic Club and we secured the DIXI, with our own John Wallis (Register Captain) obliging with his i8.
We decided that the other cars should be practical everyday ‘Classics’ from the 1970s and 80s eras when BMWs were really special cars. As always, our members came forward in offering their cars for the display so our early planning had been worth the effort – or so we thought. 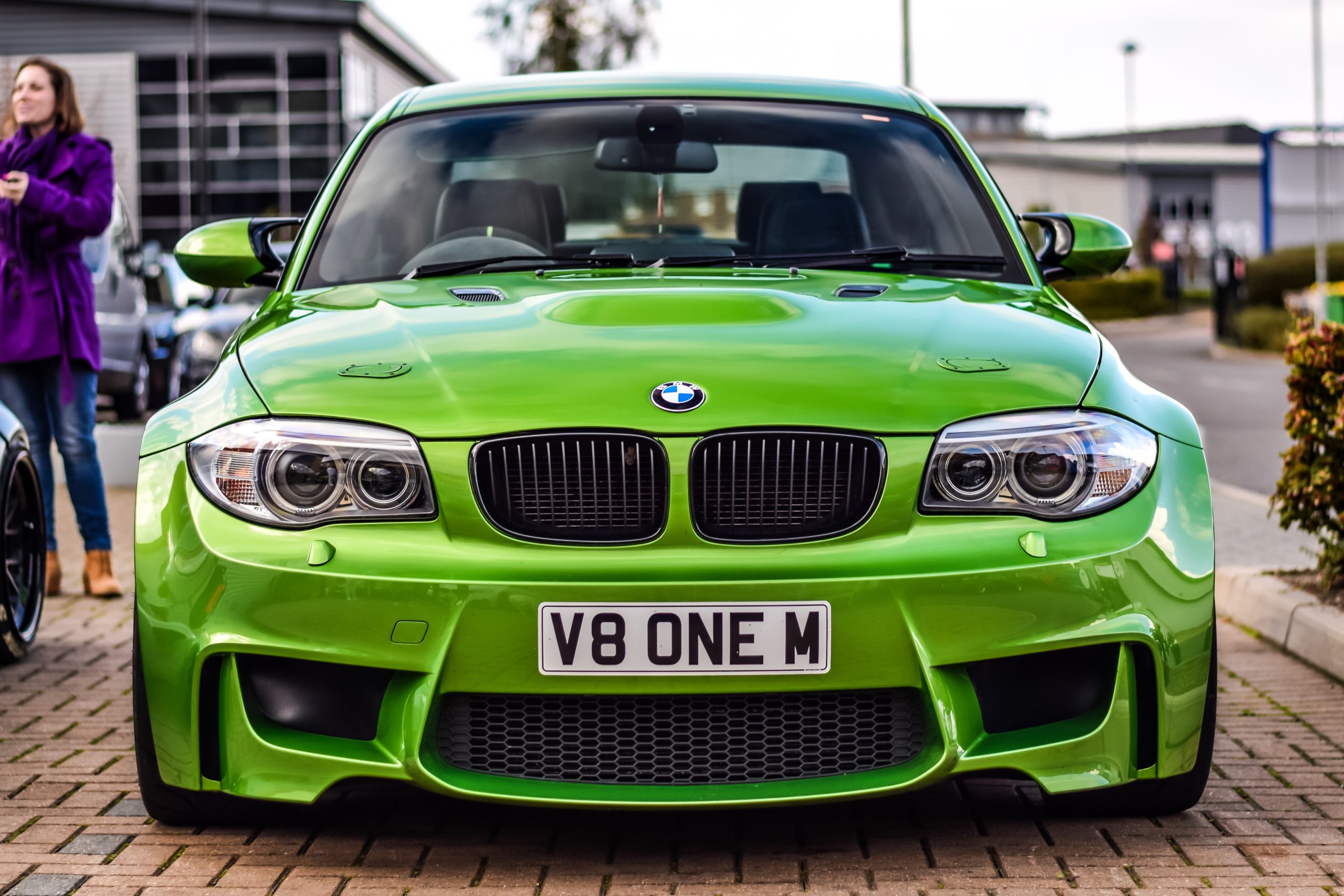 At the eleventh hour, we were informed that BMW UK were unable to take their reserved manufacturer’s stand and the organisers offered it to us – BMWCC to the rescue.
Our close working relations with BMW UK resulted in us being able to capture two of their ‘modern Classics’ – for those in any doubt as to whether cars from 2011 or 2016 can possibly be considered as ‘Classic’ then read Dan Norris’ excellent write up, ‘Lethal Weapon-Two’ in last month’s SS for reassurance.
Dave Evans also provided a couple of BMW motorcycles on the display, adding a little spice for the two-wheeler followers, which helped create interesting displays on both stands.
In fact, the BMWCC got a Commendation mention at the Awards night – high praise indeed!! 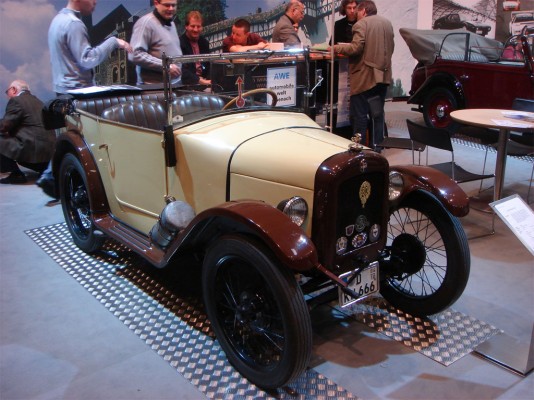 Yes, our Club stand was a great success and a big thank you should go to Dave, Jan and their team of Central West helpers for their hard work over the four days, along with the reps for the Car Club Insurance scheme and Next Step Heritage for providing the coordinated graphics and the excellent Top Trump cards, which were a real hit with the kids collecting as well as a few ‘older’ kids too!

I want to offer a special mention to David Mawby’s father, who attended each day, speaking to the many who showed interest in the DIXI – he was a fountain of information on all things relating to the Austin 7 and seemed to be in his element all weekend – Thank You.

It goes without saying that those who volunteer not only to loan their cars but put in the long hours each day, talking to fellow enthusiasts, meeting / greeting other Club members, enticing new members (50+ signed up) etc, etc, are the real heroes and to each and every one I offer, on behalf of the whole Club, a heartfelt Thank You for your dedication to the cause.

All that said, we all take lessons learned from the show, and the brief opportunities gleaned from other club stands has always been an important exercise in my visits. One key in attracting new members is the offering of a ‘free’ gift making the signing up a no-brainer, and not least the importance or providing teas/ coffee, if not the full Trailer facilities, something we shall bear in mind for next year.

And so as one show reaches it crescendo and is drawn to a close then we receive the initial invitation for the 2017 show – no rest for the wicked.