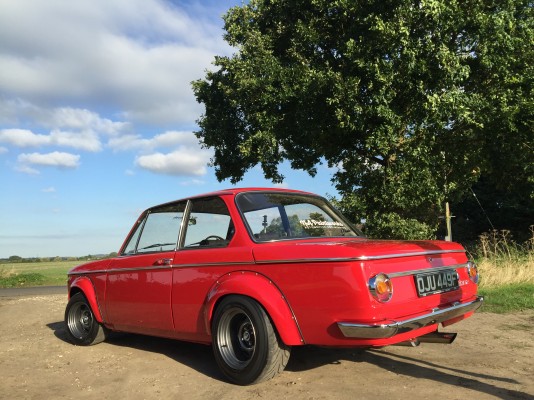 Nigel Andrews’ father is a part-German, BMW-loving farmer who had wanted a BMW 2002 as long as he could remember. Nigel Andrews went into the car trade and acquired a rotten one. “Dad wanted one… me being an idiot…” That was February 2010.

Six years of painstaking weekend work later, and this is the result: a 1968 BMW 2002, adapted somewhat to “annoy the purists,” and “because I wanted it this way.” Quite so.

As you’ve already noticed, this is part restoration and part transformation. The eight-and-a-half inch wide wheels, shod with Toyo Proxes, are totally non-standard but look fabulous. So too the DTM-ish wheel arches and the turbo body kit. The colour is non-original too – although the Verona red that you see here was an official 2002 colour, just wonderfully brighter and livelier than the almost burgundy shade it replaced, officially designated Granada red.

“It’s number 36A,” says Andrews, as we get ready for a spin out into the fields east of Oxford. “A pretty early one – with the normally aspirated, 2 litre engine originally good for about 100 bhp, now producing more after some tweaks.” The car was only launched in January of 1968, so that sounds right. It’s the model everyone wanted and the logical successor to the already hugely popular 1602 and 1600 Ti models, launched respectively in 1966 and 1967.

“What tweaks?” I ask, as he floors it and we jounce up the road more briskly than I’d expected.

“Twin solex carbs, 292 degree camshaft, oversized inlet and outlet valves, a four branch stainless manifold, unleaded conversion so it can run on 97 RON fuel; oversized high pressure pistons; a lightened and balanced flywheel.” More than I had expected. Nigel estimates 140 bhp, which would translate into something like 7.5 seconds to 60, with an officially-quoted kerb weight of 990 kgs. The fourth gear ratio limits it to 120 mph.

Apart from the mechanicals, the bulk of time spent on this car has gone into the bodywork. And therein lies a tale.

“I’d bought a previous 2002 but it was not worth working on – sold some bits and discarded the rest. Then I viewed a couple more. But I didn’t want vehicles that had been partly ‘restored’. In one case we found a triple patch on the same panel. What I wanted was a completely honest rotter that wasn’t beyond hope. This one was in Brighton and it cost 1,500. It fell into the category of ‘what you see is what you get’. That’s what I wanted. It was a runner, just, but we recovered it back to Oxford anyway on a flat bed truck.”

By ‘we’, Nigel is referring to Doug Ligertwood, the well-known founder of a thriving paint, body-shop and wheel-refurb business called Oxford Crash Repairs, situated next to the BMW MINI plant in the Cowley district of Oxford. “Doug let me keep the car in the shop for two years. It was under cover and I could work on it when I had spare time – that was brilliant, obviously.” Meanwhile local BMW specialists Mark Purcell (of Mark Purcell Ltd) and his business partner John Blake helped with the mechanicals.

Nigel, who has recently set out on his own with N&A Paintworks in the Oxfordshire village of Chalgrove, is a bodywork and paint specialist, which suited this restoration down to the ground. “Apart from the roof, almost every single panel is new…” he reports. When he began, there was a whopping hole in front of the pedal box (“it was a Flintstone car!”). Now I begin to see the sheer extent to which this car has been recreated, and why, inevitably, there is a limit on what you can expect when buying a 40-plus year old car out of someone’s back garden.

The painting of the car wasn’t straightforward. Initially, he encountered some chemical reactions and had to begin the work all over again. The second time it went like a dream with water-based modern paint.

There’s no doubt that it looks absolutely fabulous – we get a whole heap of thumbs up from other drivers almost everywhere we go today. That’s what’s nice about an old car that’s been loved and restored. It seems to generate smiles instead of envy.

“The hardest part of the restoration was the exhaust…” He went off to Fritz’ Bits, but what he got back came with no brackets. He had to manufacture his own. Worse, he had to fill the existing, offset hole in the rear skirt, relocating it to another that was cut centrally – a vast amount of work to achieve a retro, Mini-Cooper style look.

The delicate, thin-rimmed wooden steering wheel is no Moto-Lita add on, but entirely original to the car and apparently extremely rare. All Nigel has done here is to re-lacquer it. We agree on the ‘feel’ that you get from a thin steering wheel. Funny that Rolls-Royce under BMW went back to thin steering wheels for its Phantom, just as the rest of the BMW group were rushing headlong into thicker and thicker wheels, to impart a sub-conscious feeling of ‘substance’.

That’s what I’m beginning to appreciate about this project, the care with which certain original features have been protected, promoted and even revered; while in other regards the car has been crafted into its own thing, much closer in looks to the notorious and ultra rare 2002 Turbo, that only came into existence five years down the road.

The ignition key, for instance, is original. It’s this delicate little thing that pivots on its hasp, presumably to reduce the likelihood of it getting snapped over years of use. Forty-eight years after manufacture, it appears to have made its case.

The ride, on the other hand, is firmer than expected, although on my return two months later to take fresh photos, I find that he’s made changes, all for the better, switching at the rear from GAZ Gold gas coilovers to more forgiving Bilsteins.

It seems silly to ask about fuel consumption, but the cabin is a bit fumey and those carburettors can be juicy. I’m just curious. “Actually it does much better than my E46 330Ci,” he says – the latter averages 21 mpg the way Nigel drives it, and being an auto obviously doesn’t help. The 2002, by contrast, has the featherweight, glass box style of the late-60s, and none of the lardy features of today’s machines. As then, as now: it has a surging, sprightly alacrity about the way it goes, while the cool, elegant lines of the bonnet and boot, carried over from the ‘neue klasse’, remain entirely modern.

Opinion on the 02 Forums that Nigel visits has been split, inevitably, between those who think the car should have been returned to the same state and spec it came out of the factory with, and others who simply admire what Nigel has achieved here. Reflecting on a project almost completed, he notes that cost or ‘investment’ was never what he had in mind. In fact, there remains a ‘to do’ list – he wants an exhaust that sounds better, and has never been quite happy with the difficult fitment of the existing one.

So far, he concedes, the entire spend has been in the region of 20,000, including the 1,500 purchase price. But that includes not a single penny for labour, which amounts to hundreds if not thousands of accumulated hours. Although offered big money for his 2002, Nigel’s always turned down the suitors with no further debate. “There’s absolutely no way that I’d sell it to anyone,” he says.

Having attended a few shows this past summer, his main realisation is just how rare the 2002s have become. At the time of writing this article, there were none on Autotrader and just three on Pistonheads, two of them ‘POA’ and one sitting pretty in California. “Classic VW camper vans and 911s are ten a penny by comparison,” he notes.