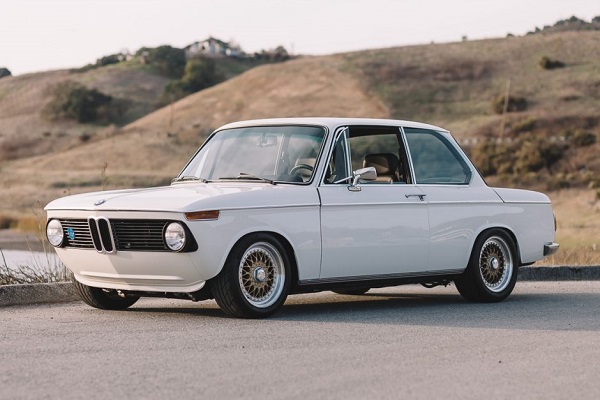 ‘Restomods’, are increasingly popular and no less divisive, however this S14 powered 02 is an interesting concept to any BMW fan, purist or not!

Celebrating its 50th anniversary this year, the 02 series is one of BMWs most influential cars to this day. BMWs first true international hit and the car that gave the company its reputation for fine sporting saloons, the 02 laid the foundations for the 3 Series – now BMWs most successful product.

The 02 continues to capture imaginations today with its keen handling and responsive drive, offering lightness and purity of experience few cars can match. So too, the simple but classy Michelotti design still sets pulses racing 50 years later.

However, some 02 fans do find it a shame that BMW never fitted an engine larger than 1,990cc – as the chassis is clearly capable of handling far more.

While turbocharging – either using the rare factory setup or an aftermarket system – is an option, it is perhaps no cheaper than changing the engine altogether. Or at least that’s clearly what a Californian 2002 owner thought.

The owner of this 2002 thoroughly restored his BMW over the past three and half years, beginning with a ‘glass-out’ respray in Chamonix white. However, in the search for greater performance the owner then acquired the 2.3 litre S14 engine from an E30 M3 – a legendary engine, we surely don’t need to say.

With some light tuning, the refurbished engine is likely making more than its original 192bhp, an upgrade even on the rare 2002 Turbo’s 170bhp.

Having also benefitted from an upgraded rear end, largely based upon that from an E21 320is and new Getrag 245 5-speed transmission, this 02 can surely shift like few others.

Of course the owner has also improved the bushes, shock absorbers, springs and brakes to compensate for the extra power.

This makes this 2002 an interesting restomod, as often modifiers tend to fit the most modern components as possible. Instead, the owner of this 02 has tried to keep parts close to the age of the 02, perhaps only 15 years newer than the car itself.

The interior reflects this mentality too, borrowing the front seats of an E21 3 Series and the rears from an E24 6 Series.

Let us know what you think of the S14 powered 2002 on our facebook page!

See the car on Bring A Trailer.