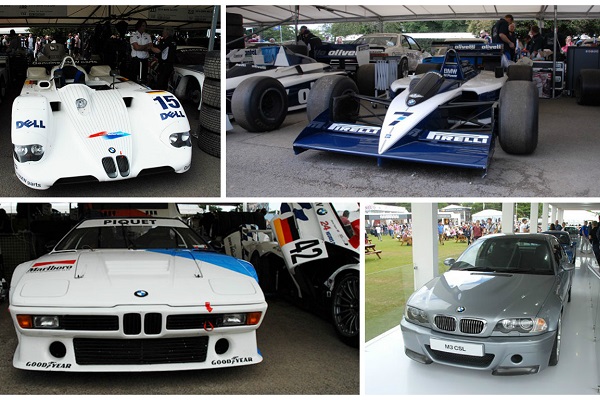 The Goodwood Festival of Speed has just been and gone with BMW the featured marque. Celebrating their 100th anniversary, BMW pulled out all the stops, with BMWs of all ages throughout the festival. These are 8 of the coolest we found.

Perhaps an obvious one for a celebration of BMW Motorsport, the 3.0 CSL is one of the most iconic BMW racers of all time. This particular CSL was in fantastic condition, storming up the Goodwood hill numerous times, driven by Harald Grohs. When new, the car raced in the US, winning races between 1975 and ’76.

Having been inspired by the success of the BMW engined McLaren F1 at Le Mans, BMW developed the V12 LM in a bid to win even more glory with the S70 engine. Combining the engine from the McLaren with a Williams chassis, BMW won Le Mans in 1999 with the LMR. This 1998 car was one of the entrants to retire early in 1998 the previous year.

Displayed on BMW’s ‘M AVENUE’, the M1 drew large crowds at Goodwood, no doubt impressed by the car’s still contemporary styling. BMW’s first and indeed, until the recent i8, only mid-engine car. The M1 has become iconic not just for its styling and performance, it also broke the mould with its useability.

One of Gordon Murray’s most iconic race cars from his time at Brabham, the ‘lowline’ Brabham made savings on drag by canting the engine to the side, allowing for lower bodywork. Unfortunately, the design also compromised the reliability of the car, reducing its competitiveness.

Another car from BMW’s ‘M AVENUE’, the CSL didn’t draw the crowds at Goodwood compared to some of the older and more exotic BMWs. Those of us in the know however, will see through the fairly tame exterior, acknowledging what is surely one of the best iterations of the M3 of all time.

The E46 M3 was a great car in standard form, perhaps only rivalled by the E30 in enthusiast’s hearts. The CSL is the ultimate version of that revered chassis, being lighter, faster and even stiffer than the ‘normal’ M3. A BMW great, sure to only to gain status in the years to come.

We’ve already raved on about the standard BMW M1, but this Procar racer was worth another mention entirely. The Procar championship was competed amongst the top F1 drivers of the day in 1979, as a ‘warm-up’ publicity race on F1 weekends. Niki Lauda won the championship.

This one in particular, was Nelson Piquet’s back in the day, and is now owned by BMW classic.

This MINI Superleggera first appeared at Villa d’Erba last summer, causing a sensation with its fantastic exterior styling and the promise of a nimble, two seat MINI roadster. The concept made it out to Goodwood however, with visitors allowed to get up close and personal with the car.

The car’s fantastic interior meant it just had to make it in our list, even if its not technically a BMW. Let’s hope some cues from the concept make it inside the production car, due to arrive in 2018.

As is tradition, BMW constructed a large ‘central feature’ in front of Goodwood House, literally holding up three cars in the sky. Hoping to demonstrate both their motorsport past and future, the exhibit featured a BMW V12 LMR, Brabham-BMW BT52 and this exquisite Mille Miglia Roadster.

As the car that won the Mille Miglia in 1940 – BMW’s only ever win and one of just three years an Italian car didn’t win – it’s a special car to say the least.

For more BMW news, articles and info, sign up to our FREE newsletter here