7 Series taking a page out of Q-Branch’s book. 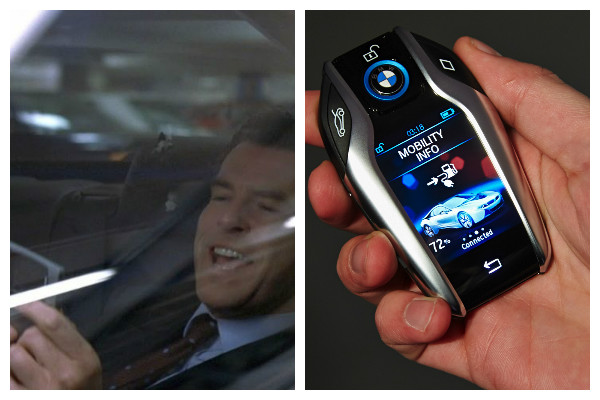 The 7 series has long been BMW’s testbed for luxury features and technology, but it seems with their latest idea, they have taken inspiration from 007’s very own Q-branch. Specifically, Bond’s very own 750il from Tomorrow Never Dies.

In this clip from the 1997 film, Bond uses the remote control of his 7 series to keep it away from the thugs of villain Elliot Carver, racing round the multi-story car park of a Hamburg hotel.

19 years later and BMW seems to have made Q-branch’s idea a reality. In this promotional video, BMW introduces the ‘display key’, with which 7 series owners can park their car, from outside it, using the key as a remote control. Surely its just a question of scale before we could drive the car from the back seat, just like Bond?

We’re not suggesting that MGM’s lawyers will be preparing a case against BMW, but it seems a strange coincidence that Bond’s remote control car is also a 7 series.

Perhaps remote control of our BMWs via a smart phone isn’t far away. Although we’re fairly sure BMW isn’t working on a mildly offensive ‘German’ (and the parentheses can’t be over-emphased on that) in-car voice that berates the driver for “unsafe driving” and “breaking the warranty”.

>>>For more BMW news and articles, sign up for our new e-newsletter here!