After many a BMW M3, I currently find myself the owner of a 1999 BMW Z3M Coupe showing 158,000 miles. Backed up by a great service history, straight panels, and formerly enthusiast owned. What could possibly go wrong…

In simple terms, I would say my heart did the buying here and not my head. For some reason (as I type I’m still not quite sure why), I did little to no research about the Z3M. I’m a member of the Z3MCoupe forum and have been buying cars for years, but for some reason I saw the car and thought ‘that’ll do’ and bought it knowing I’d have to spend a few hundred quid getting it presentable. All this of course before the lockdown.

The car was quickly into the garage for a fluid change and an annoying clunk to be fixed, which when completed, was back on my drive two weeks later with my wallet £600 lighter.

The garage, R G Lewis in Tattenhall, my normal BMW independent of choice, advised me that it might be worth looking at the floor around the jacking points as it was a bit scabby and would benefit from a wire wheel and a touch up. As soon as it had stopped raining I had the car on the ramps to investigate, and I found the signs of corrosion. After a bit of scratching about on the drivers’ side mount there was worse to come. The sill panel had started to disintegrate. So I then had to look a little deeper, and off to the internet to find out how to remove the sill covers and wings to see what was going on.

The first step is to remove the arch liners, which is an easy enough job, so no need to include it here at this point. Just take the wheel off, undo a few clips and screws, and remove; the rears are trickier if they have grabbed onto the inside rear arch lip, so just take your time and tease it out. Once off you can see the edge bolts for the wing and sill cover. The majority of fasteners are 8mm hex nuts into captive body nuts on the car. The front wing is held on by two bolts at the top under the bonnet edge, one at the bottom edge obscured by the door and one accessed from inside the area you have just exposed when removing the front wheel arch liner.

Then onto the sill mounting bolts. The door trim needs to be removed, which just pops off with a trim removal tool, exposing the three hidden top bolts. Then onto the two rear bolts, one of which is tricky to get to as it’s behind the rear quarter arch. One can be seen from inside the arch, but the other is hidden. To access this hidden bolt, I undid the quarter bolts from inside the car to open up the area, allowing me to just get my hand and a socket in there. It was not much fun, and the bolt heads had seen better days. Then finally the bolts along the bottom underside edge of the sill trim come off, and the whole thing can be carefully removed.

You may need to remove the jacking points for ease, although you don’t need to. In my case, I did as that was the start of the job, as well as the air duct above if it still lives there, just a 10mm nylon bolt and an 8mm hex screw to remove.

After about 30 to 40 minutes the sill panel was on the floor and it was not looking too good. As you can see time has not been kind to the sill cover, which when I did some homework I found is a common problem with the Z3M, which takes me back to the start – I should have done my homework! But alas it is what it is and we move on.

As well as the rusty sill covers, I had rusty wings that were a bit too far gone as they had previously been repaired badly, and the edges were falling away. Then after all this removal, I could finally get to the part of the car I wanted to address in the first place. There was rust on both front and rear jacking points, and at various points along the chassis, worse in some areas. 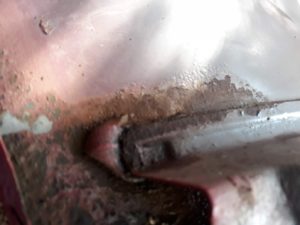 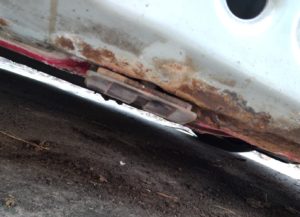 So I had a mini restoration on my hands and needed to get parts on order quickly. I ordered two sill covers and two wings as I knew the other side was as a bad if not worse, a couple of arch liners (as two of mine were damaged anyway), lots of new nuts and bolts to replace the old worn rusty ones, some new trim clips to replace the ones broken during the interior trim removal, some Por15 rust inhibitor paint, some Waxoyl underseal, some cavity wax, wire wheels and some paint brushes, thank you Harry Fairbairn BMW and eBay.

The first job was to wire wheel any rust I could see, and lather it all in Krust Rust treatment. 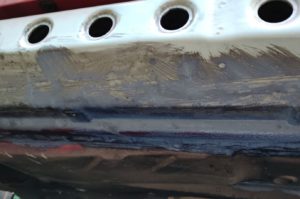 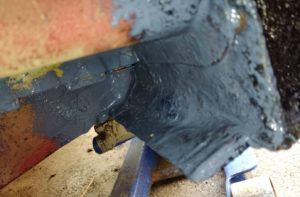 When it was properly dried I applied my Por15 paint, and then went over with Waxoyl underseal as a final protective coat. 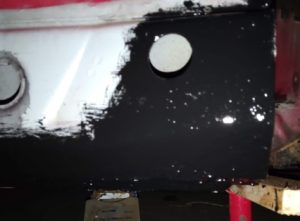 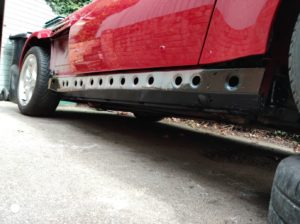 Whilst the covers were off I took the opportunity to spray two cans of cavity wax into most areas I could reach, every bit of protection helps. I extended it into the rest of the existing floor underseal, it would probably look better in the original red but that’s a luxury I sadly cannot afford. 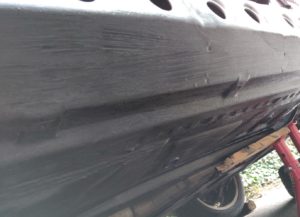 The wings and sill panels arrived and were sent to my painter, Roberts Refinishers in Ellesmere Port. 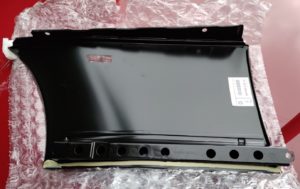 I tried a pattern part first but the fit was just not up to scratch, and since I was dropping just the parts to the painters I wanted a hassle-free install once they were returned, which they were four days later with the colour matching the old ones. 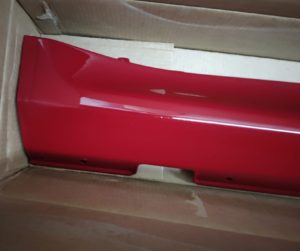 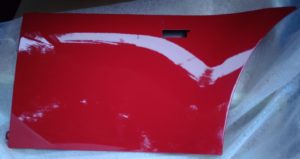 They even coated the backs with Waxoyl for me, as well as adding a good amount of stone chip guard on the under edges of the sill covers. I further added some clear Waxoyl to all the under edges of all the panels, allowed to dry, then fitted with new bolts, which was just a case of working backward to the start again, but being more careful with the freshly painted panels.

All done, or should I say, ready to move onto the other side and do the whole process again. The job was identical, so I won’t bore you with duplication!

And there we have it, back to how it was before we started, but with all the rust gone, and the jacking points far more attractive. As a final level of protection, I went around all the edges of the sill cover with some Hammerite smooth. Not that pretty, but servers a function as it will stop the surface rust creeping back along scuffed edges.

Words and photographs by John Denny