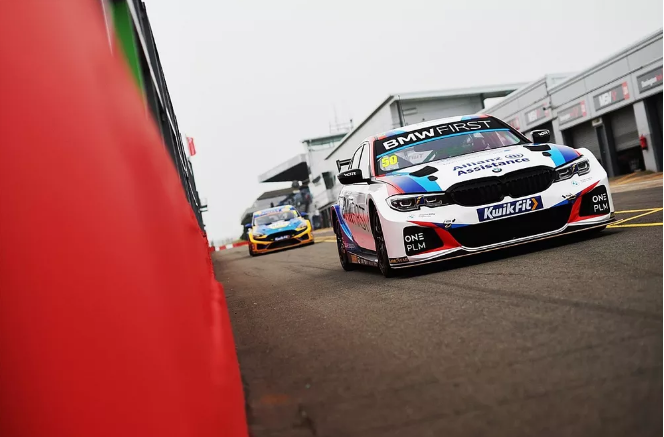 The Northern Irishman led the way in both the morning and afternoon sessions at the wheel of his West Surrey Racing-run 330e M Sport on the squad’s first full day of track-testing with the Cosworth-developed hybrid system, following a shakedown the previous day at the MIRA proving ground.

Fog meant a delayed start to the test, so not much meaningful running was completed in the morning, but most of the 23 cars got decent mileage in the afternoon, with all but a few equipped with the hybrid.

Gordon Shedden moved his Team Dynamics Honda Civic Type R to the forefront with just under an hour to go, before a run from Turkington that featured the two fastest laps of the test, the best of them 0.145 seconds ahead of the Scot.

New WSR recruit Jake Hill was sixth fastest, while the team’s other driver Stephen Jelley was 11th after focusing on longer runs.

“We had a few hiccups with minor mapping problems with the Cosworth system but that’s to be expected with the new project – some are resolved, some aren’t.

“But we’re getting through it one by one, and we did quite a few miles with all three cars.

“A lot of that was down to the preparation work at WSR, and I have to give credit especially to John Waterman [Turkington’s engineer, who has led the implementation of the hybrid] and our chief mechanic Steve Buckell.”

But Bennetts warned against reading too much into times.

“The main issue was sorting out the teething troubles and dialling the car into a 1370kg base weight [up from 1300kg last season].”

“It was great just to get back in the car – the first experience of hybrid, which we were all highly anticipating,” said Turkington.

“You definitely feel a lift in terms of performance and power once you deploy – you can really feel it increase the acceleration immediately.

“For sure we’re going to go faster this year, which is a good thing, but still we have to focus on the handling, the chassis – that’s still number one.

“With the hybrid on top of that, we’ll have a good package.”

Tom Ingram put the lead Excelr8 Motorsport Hyundai i30 N into third position, with BTCC returnee Dan Cammish fourth in his Motorbase Performance-run Ford Focus – the Ford was not only quick, but completed an 18-lap race run in the afternoon.

Fastest of the non-hybrid cars was the Ciceley Motorsport BMW of Adam Morgan in fifth place, with his time set on a 16-lap run – the sister car of BTCC rookie George Gamble was hybrid-equipped, and he set the 10th quickest time.

Behind Hill, the BTC Racing Honda of Josh Cook was seventh, followed by the second Motorbase Ford of reigning champion Ash Sutton.

The other driver in the top 10 was Dynamics Honda pilot Dan Rowbottom, ninth quickest.

The most laps were completed by the hybrid-fitted Speedworks Motorsport Toyota Corolla of Ricky Collard on 86, one ahead of Turkington.

Apart from Collard, the other testing participant not confirmed for a 2022 seat is Jason Plato. The two-time champion completed 21 laps, with adjustments to his seating position costing some time on his first outing in a BTC Honda.