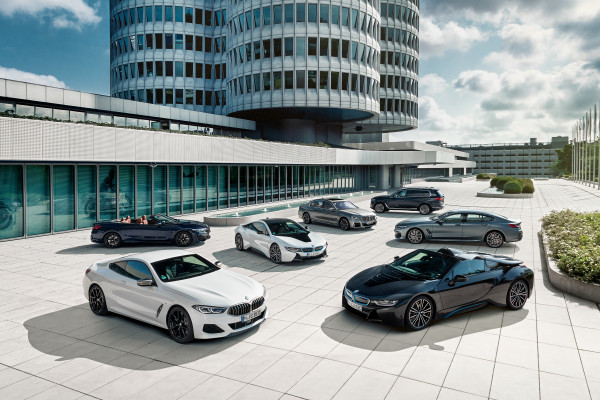 The BMW Group reported its ninth consecutive record year in 2019, with a total of 2,520,307 (+1.2%) BMW, MINI and Rolls-Royce vehicles delivered to customers worldwide. The BMW, Rolls-Royce and BMW Motorrad brands also posted new all-time highs for 2019. Sales of electrified BMW and MINI vehicles also increased compared to the previous year. By the end of 2019, the BMW Group had already half a million electrified vehicles worldwide on the road. The company confirmed its position as the world’s leading premium car company for the 16th consecutive year.

“Thanks to our major model offensive, we were once again able to increase our sales in 2019 and achieve another new all-time high,” underlined Pieter Nota, member of the Board of Management of BMW AG responsible for Customer, Brands and Sales. “This confirms our strategic approach, the “Power of Choice”, which allows our customers to choose the optimal drive train for their preferred model. In this way, we are able to meet our customers’ individual mobility needs worldwide,” added Nota.

The BMW Group expects to grow sales in the year 2020 through its model offensive.      “I am confident we will be able to maintain our successful course and sustain our profitable growth. We are targeting a slight sales increase overall for the BMW Group in 2020,” saidPieter Nota.

The BMW brand reported a new all-time high last year, with a total of 2,168,516 (+2.0%) vehicle deliveries worldwide. The new and revised BMW X models made a significant contribution to this positive development, with sales rising 21.0% to 958,732 vehicles. Thanks to the new BMW 8 Series, the new BMW 7 Series and the all-new BMW X7, sales in the luxury segment saw a significant year-on-year increase of 66.0% (105,331 vehicles) for the full year. The BMW Group plans to double sales in the luxury class between 2018 and 2020.

Electrified models in every vehicle segment

As an e-mobility pioneer, the BMW Group has already delivered half a million electrified vehicles to customers worldwide. A total of 145,815 electrified BMW and MINI vehicles were sold worldwide in 2019 – an increase of 2.2% over the previous year. The BMW i brand continued its positive sales trend last year with the BMW i3 and the BMW i8 (42,073 units,  +12.1%). Sales of the MINI Cooper S E Countryman ALL4* plug-in hybrid were up 28.1% in 2019. The introduction of the new BMW 330e*, the BMW X5 xDrive45e*, the BMW X3 plug-in hybrid* and the pure-electric MINI Electric* brings the total number of electrified vehicles in the BMW Group line-up to 12.

The BMW Group plans to expand its range of electrified vehicles to 25 models by 2023 – more than half of them fully electric. A quarter of the BMW Group vehicles sold in Europe are expected to be electrified by 2021; a third by 2025 and half by 2030.

With sales growth of 32.2% (135,826 deliveries), 2019 was also the most successful year in the almost fifty-year history of BMW M GmbH. More emotional M high-performance models were introduced last year than ever before: In addition to the BMW X models X3 M, X4 M, X5 M and X6 M, the M2 CS* and luxury sports cars M8 Coup, M8 Convertible and M8 Gran Coup also made their debuts.

Focusing on profitable sales growth in a highly competitive segment, worldwide MINIbrand deliveries totalled 346,639 units last year (-4.1% year-on-year). John Cooper Works models were once again especially popular in 2019, as well as the MINI Cooper S E Countryman ALL4* plug-in hybrid, with a total of 16,932 delivered to customers. The fully-electric MINI ELECTRIC* joined the MINI line-up in late 2019. More than 90,000 prospective customers have registered so far – reflecting the strong interest in this pure-electric vehicle.

In 2019, with 5,152 units sold worldwide (+25.4%), Rolls-Royce Motor Cars reported the highest sales in the brand’s 116-year history. Strong sales growth was recorded in all regions worldwide. North America was once again the most important market. The past year was characterised by exceptional demand worldwide for the Cullinan and Black Badge models. The Phantom, Wraith and Dawn models were also in demand. In its 11th and final year, production of the current Ghost ended in late 2019. The new Ghost will be released onto the market in the fourth quarter of this year. 2019 also saw new all-time highs in bespoke custom personalisation orders, which is clearly reflected in Rolls-Royce’s position as a genuine luxury provider.

BMW Motorrad delivered more motorcycles and maxi scooters to customers than ever before in 2019. Across the entire product range, the brand’s global sales were up 5.8%, reaching a total of 175,162 vehicles. The 2019 sales result is underpinned by BMW Motorrad’s successful growth strategy. Another record year was guaranteed by the market launch of seven new models, as well as the strong BMW Motorrad product portfolio.

BMW & MINI sales in the regions/markets

In China, the BMW Group delivered a total of 723,680 BMW and MINI vehicles to customers in 2019, a 13.1% increase compared with the previous year. This was the company’s best-ever sales result in China since entering the market in 1994.

In Europe, total BMW and MINI sales were slightly lower than the previous year, reflecting the political and economic uncertainty in a number of markets. The BMW brand was nevertheless able to increase its market share in the UK. In its domestic market of Germany, the company delivered 331,370 vehicles to customers – an increase of 3.8% over the previous year. The BMW Group also continued to expand its market leadership in Germany in the field of electromobility** last year.

The BMW Group is targeting a slight increase in global sales for the current year. It expects to see solid sales growth in Mainland China in 2020. Locally manufactured BMW vehicles will be the main growth drivers – especially the new BMW 3 Series and the two X models: the BMW X2, which has been locally produced in China since September 2019 and the BMW X3, which will also be available from 2020 with a pure-electric drive train.

Due to deterioration in the economic environment, the BMW Group expects sales growth in Europe to be on a par with the previous year.

The company anticipates a slight increase in U.S. sales this year – benefiting, in particular, from the new and revised BMW X vehicles.