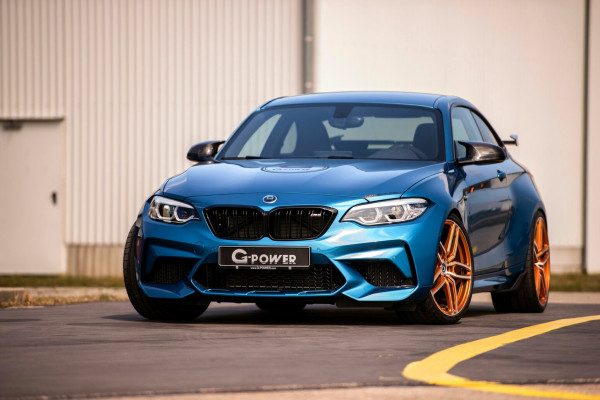 410 horses not enough for your M2 Competition? Well, renowned German tuners G-Power can supply your M2C with a whole stable full of extra ponies under the bonnet…

So, it’s a given that the M2C is a quicker car than the OG M2, and the M2C feels a much more ‘together’ car, the suspension has been refined and it now handles much better than the often skittish original M2. Unfortunately, it isn’t any quicker than the M3/M4. You’d naturally think smaller car, less weight, quicker? Right? Wrong! The M2C is a bit of a Bratwurst chomper, and so tips the scales at a similar weight to its F80/2/3 cousins, so although it has been praised for its chassis and handling prowess, its outright speed has been ever so slightly blunted by its bulk. So this is where a company like G-Power comes in.

Quite rightly, you want your new M2C to be slightly quicker than the M3/M4, well G-Power have the goods to make your car quite a bit faster, or OMG that’s far quicker, and the car you see in these photos is the most powerful M2C on the planet. The G-Power M2 Competition is a 680hp/860Nm small-calibre high-speed bullet at an M4 price. Investing this difference in G-Power performance upgrades for the M2 Competition will give you a BMW with hypercar performance! In the league of the supercars when it comes to driving dynamics, the G-Power M2C also has the performance figures to back up the hype – it can sprint from 0 to 60mph in an eye-watering 3.2 seconds and attains air-splicing speeds of more than 200mph. Indeed, G-Power’s M2C has been clocked at 205mph… G-Power’s engineers say that the car could comfortably dip under three seconds in the sprint to 60mph, but despite the numerous suspension upgrades, it just struggles for the traction needed to crack the three second mark. 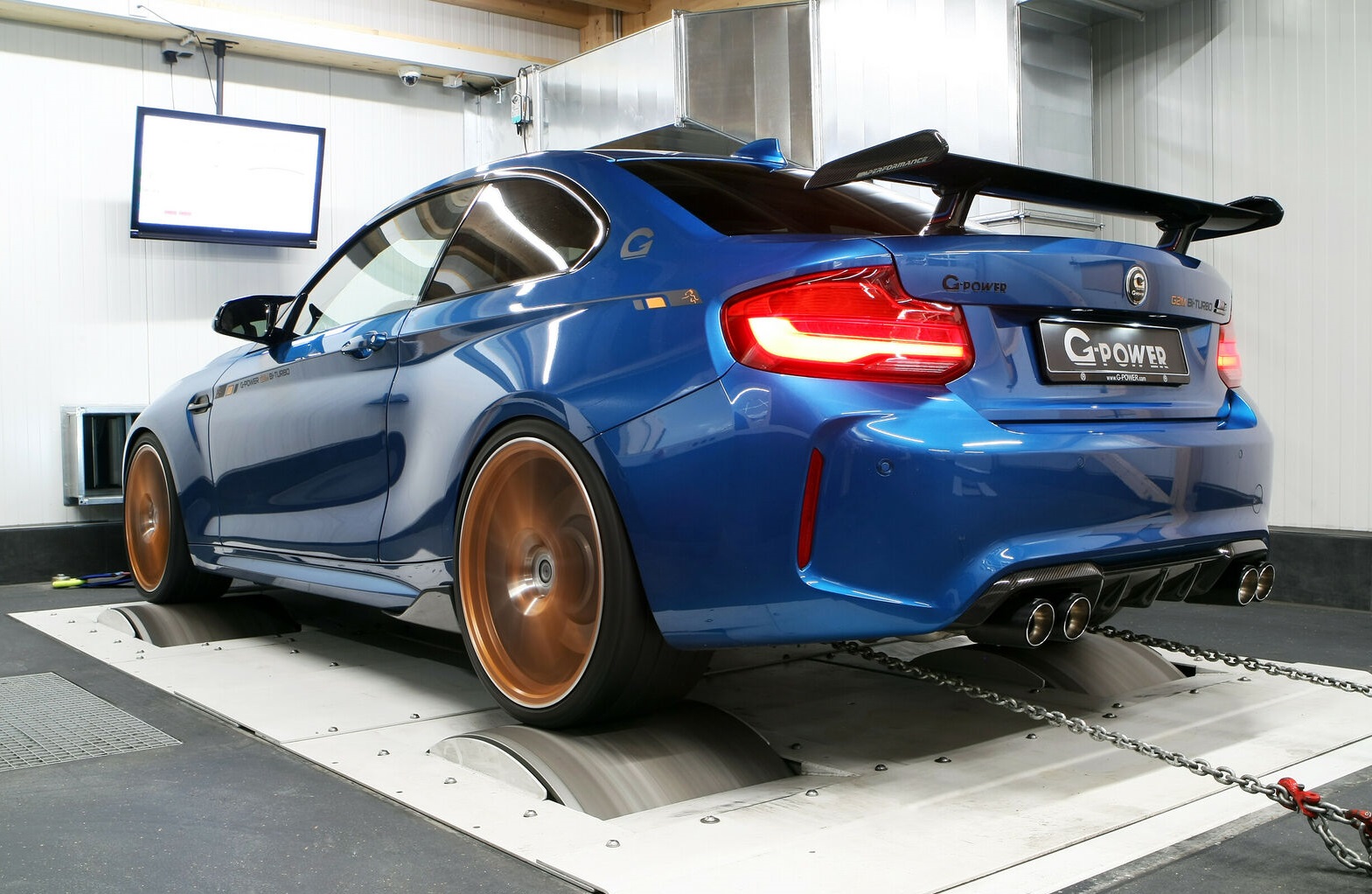 So how is this amazing power output achieved? First off, G-Power modifies the standard turbochargers with larger CNC milled compressor wheels for more boost. Furthermore, sophisticated precision machining has produced a vastly improved flow rate, which makes the G-POWER turbine wheel much more efficient than the OEM wheels. At the same time, it is also lighter, meaning that its moment of inertia is reduced, which results in optimal responsiveness. G-Power also modifies the turbocharger exhaust side: turbine blades with capped ends reduce the exhaust gas temperature, making it safe to use higher boost pressures. The efficiency of the turbochargers has been maximised thanks to a CNC-milled exhaust and compressor housing with enlarged inlets and outlets. In order to reduce the exhaust back pressure and optimise the sound of the M2 Competition, G-Power offers its very own flow-optimised downpipes and exhaust system made from high-grade stainless steel that produces a spine-tingling roar through its two 90-mm twin tailpipes, yet is docile in town traffic. The car’s electronics are then tweaked by individually programming the Performance Software V4 on the in-house four-wheel dynamometer. Following the modifications to the engine and exhaust system, the G-Power Performance Software V4 now takes on the role of the conductor, optimally coordinating the individual players in the hardware orchestra. It is individually programmed to the requirements of the base vehicle in G-Powers four-wheel chassis dynamometer. The electronics specialists at G-Power like to take their time over this, and are only satisfied once the curve of the performance diagram matches with the advertised performance to deliver the best possible results. The M2C’s maximum speed, capped at 155mph (170mph with M Drivers Package), is also removed.

Of course, you can choose to spend as much as you want on your conversion. G-Power has lots of goodies to tempt you to open your wallet even further, like the 20″ Hurricane RR forged wheels and the companys G2M RS coilover suspension. The Hurricane RR double-spoke wheels are available in various finishes and come in 9×20″ with 245/30R20 high-performance tyres (front) and in 10.5×20″ with 285/25R20 rubber on the driven axle. Further details concerning the G-POWER performance parts for the BMW 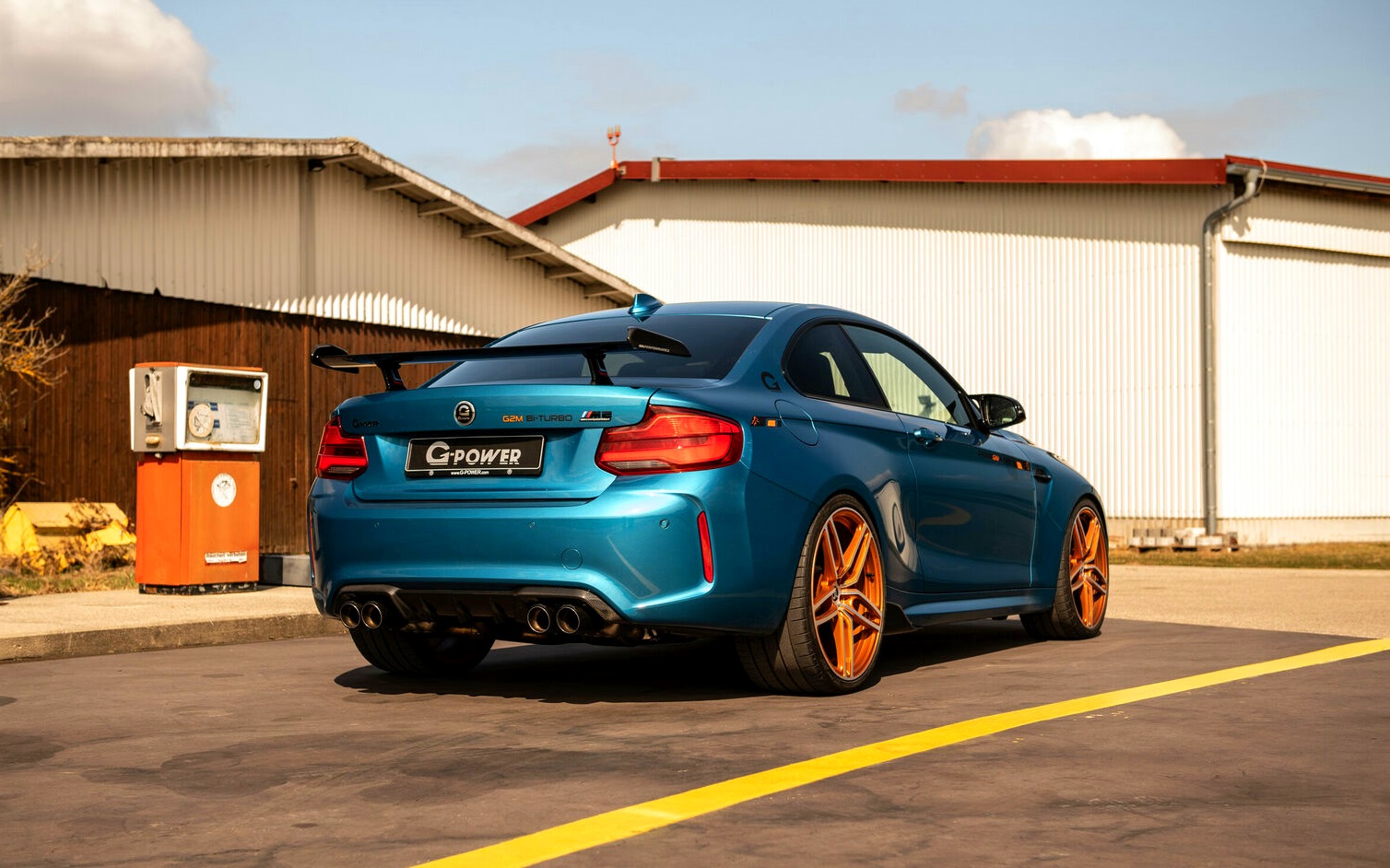