Sharknose Collection at the Ace Cafe 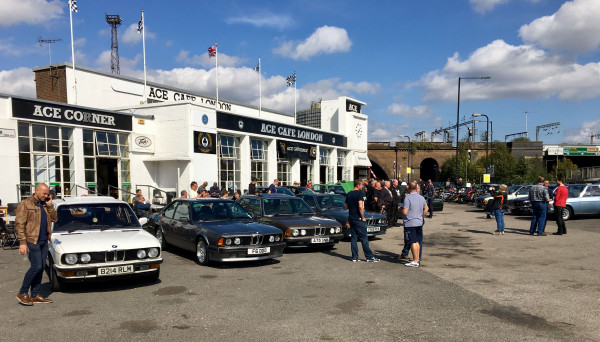 September is always an interesting month for car meets and shows for two reasons, Firstly the weather: you never know what you’re going to get. Saying that, we expected great weather in August but got wind and rain at the National Festival. Secondly, it’s coming towards the end of the show season and lots of cars go into hibernation. But for a few years now (this being the third) I’ve held a sharknose meet at the Ace Caf in early September. It is for me now the ‘end of season’ meet up and a few others see it this way as well. It is a relaxed and informal meet up and all cars welcome. We all like seeing the shiny, immaculate cars, but I love the charm some of the not-so-perfect cars have.

This looked like it would have a good turnout and the weather was good. Due to start at 12, we (myself, Anthony Mason, London Region Captain and Silas Beniah, good friend and Club member) got there a bit earlier, put up the Club flags, had a cup of tea and some breakfast and waited for the cars to arrive. Being a pre-booked event, I had 50 names and cars on the list, gave them until 1pm to arrive and then we could move in other cars which were on the backup list or not registered.

By 1.30pm we were almost full and we had every shark in attendance expect for an E12 (where were the E12 owners?). The E24s and E9s were out in force but we also had a few E3s, thanks to Tony Wilkes for that as we don’t really see many of them. An Alpina ’02 made it down from Birmingham and a couple cars made the journey up from the south coast. With some people leaving and others coming we had a steady turnover of cars, and as and when space was available we let in a few non sharks including a super rare E30 Alpina B6 3.5. With the turnover of cars and the ones parked outside we certainly had over 70 cars in total turn up, which is great, and I really appreciate the effort people made to come and be a part of the day.

The feedback from most people is that they like smaller meets ups like this; they’re not an early morning start, they’re informal and it gives everyone a chance to meet each other properly and talk cars, certainly the ones we have a passion for. So, with that sort of feedback, the 2019 date has been provisionally set and will be confirmed early next year.

I’d like to thank all who attended; thank you to Anthony and Silas who helped out on the day, the girls in the office for communicating with the members and letting people know that the event was being held, and Richard Baxter for setting up the Sharknose Collection.

See you all next year!