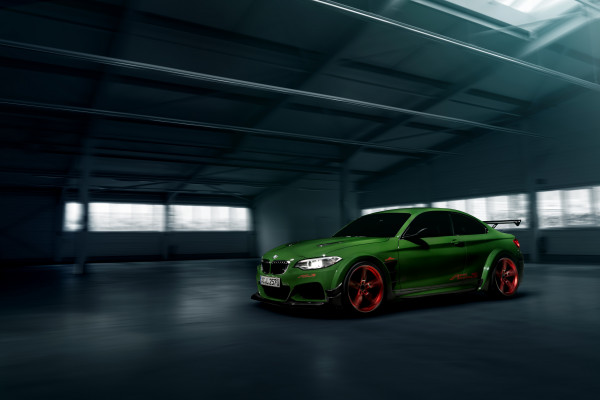 Although we rate some variants of BMW’s 2 Series relatively highly, they still aren’t perfect. The M235i and its M240i replacement, although quick, lack the focus and aggression of a true M car. And while the M2 is more fun, performance wise the M240i is snapping at its heels and its chassis often feels harsh on the UK’s poorly maintained roads. A comparison drive in a Porsche Boxster or a Cayman shows how a car can handle without being bone-jarringly stiff; so if the M2 is good but slightly flawed, who makes the ultimate 2 Series? Step forward AC Schnitzer with their ACL2!

German tuner AC Schnitzer has the solution to the M2 conundrum with its ACL2. Based on an M235i, its body has been transformed with the addition of 70mm wider wheel arches, a front splitter, dive planes and an unapologetically huge wing. The result is a car that looks more Porsche 911 GT3 RS than M2. It even makes BMW’s own M4 GTS look like a 420d!

In fact, it is so quick AC Schnitzer has just set the fastest ever lap by a road-legal BMW. Markus Oestreich, previous competitor in series like the ETCC, WTCC and DTM, completed a lap in the ACL2 in 7:25.8s – a couple of seconds under that of the 7:27.88s of the aforementioned BMW M4 GTS.

You can watch the full lap in the video on YouTube (not for the squeamish, incidentally, as the ACL2 hits a bird a few minutes into the lap): https://youtu.be/okfT8LlBxeA 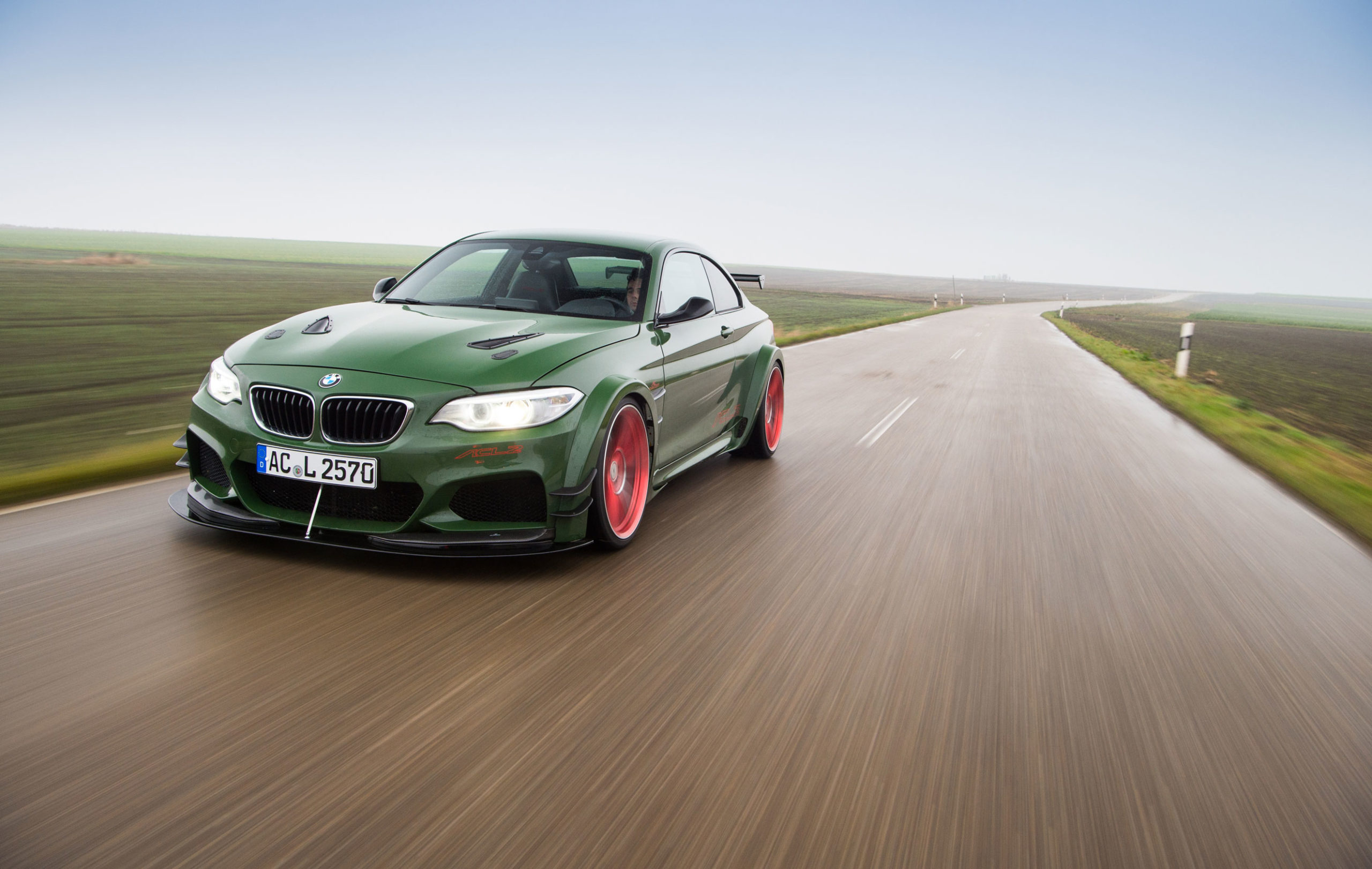 The ACL2’s aero and arches express an intent that is more than just skin deep. The original single-turbo 3-litre straight-six has been replaced by the twin-turbo version from the F80 M3/4. AC Schnitzer already offers a power upgrade for this engine to boost its output from 425bhp to 503bhp – some 10bhp more than BMW’s M4 GTS boasts. With the help of a new downpipe, exhaust system and even more tweaking of the ECU it has raised this to 562bhp, with torque soaring to 546lb-ft, a 140lb-ft increase over the standard M3/M4 engine tune. A top speed of over 200mph is claimed, with 0-60mph completed in a blistering 3.7secs – just 0.1secs quicker than the time posted by the M4 GTS. Markus said the ACL2 is much quicker than the GTS but struggles to put all that power/torque down from a standing start… 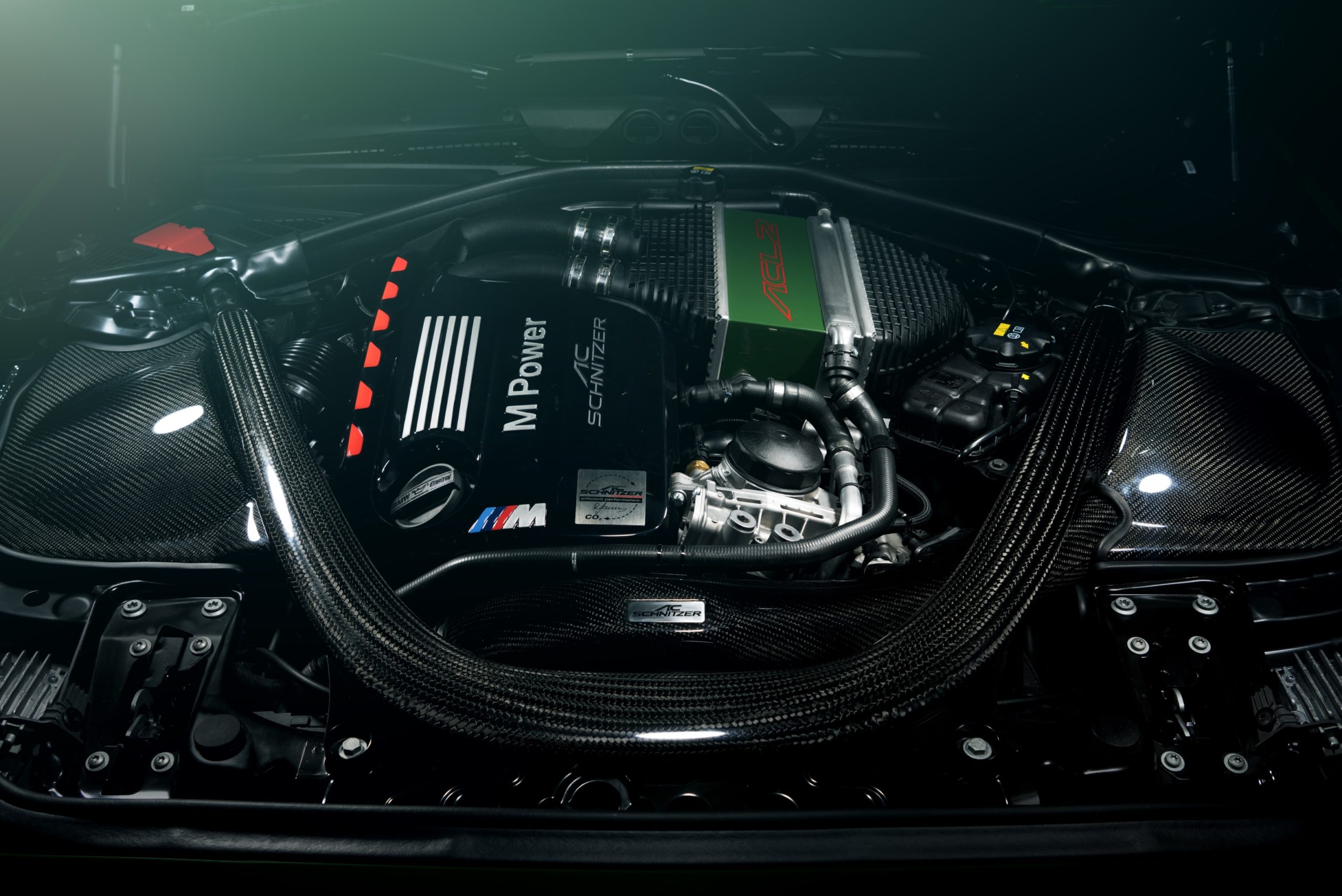 For it to cope with this performance, the ACL2 borrows the front and rear suspension, carbon fibre strut brace and optional carbon-ceramic brakes from the M3/M4. However, the limited-slip differential is a more conventional unit than the Active M Differential found in BMW’s M-cars.

Rather than taking the springs and dampers directly from the M4, the ACL2 uses bespoke height, bump and compression adjustable suspension.

AC Schnitzer has gone to great lengths to keep weight down, too. The rear seats have been ditched (and not replaced with a roll-cage), and a lightweight battery has been fitted along with a carbon fibre bonnet. The manual gearbox saves 25kg alone over the DCT ‘box. Thanks to these weight saving measures, the ACL2 has a kerb weight of 1475kg, 20kg/44lb less than an M2 – this may not sound much, but it’s virtually nine x 5lb bags of potatoes!! 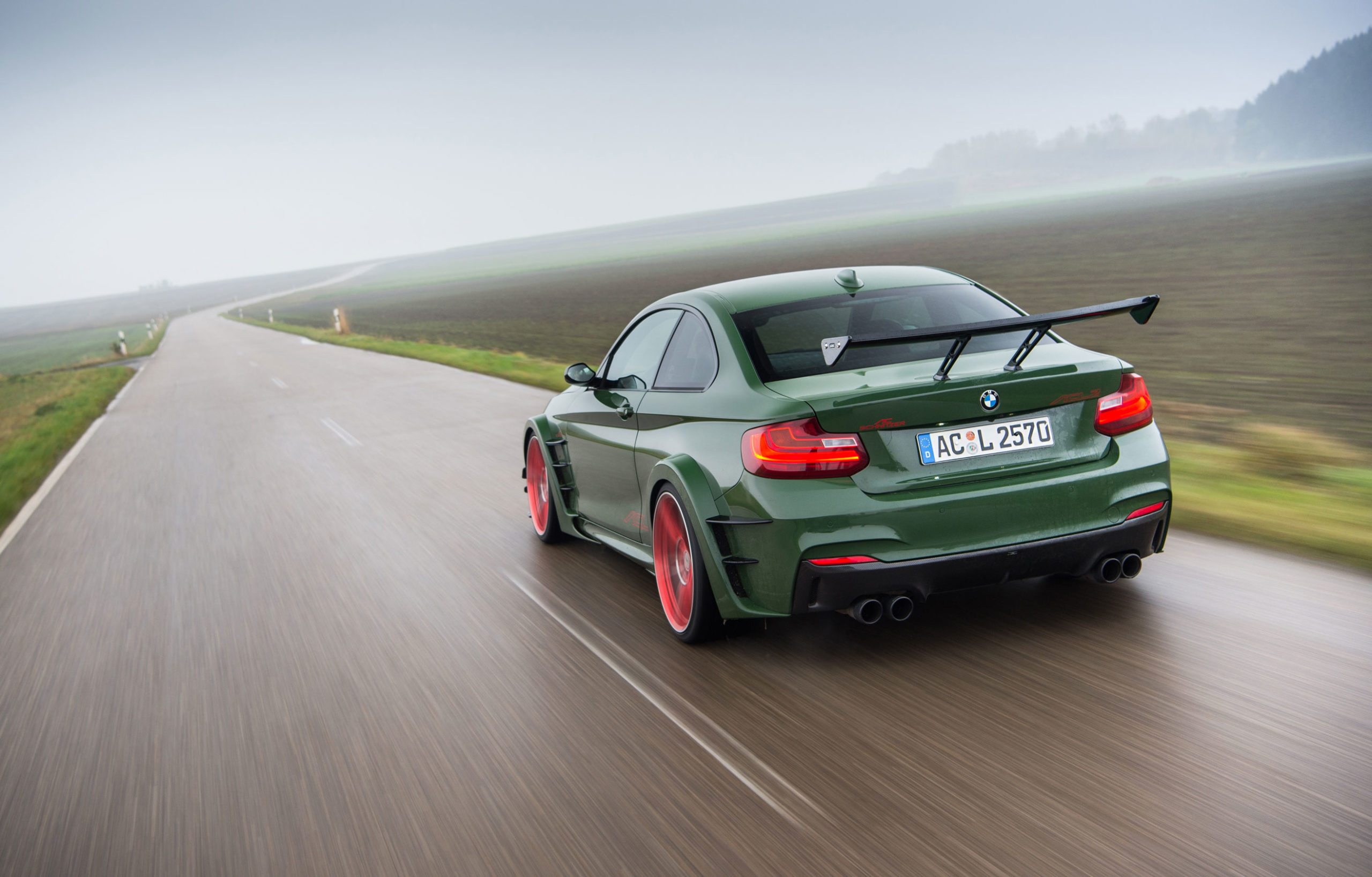 The first thing you notice is that the M235i’s interior has been subject to considerable modification, and the exterior’s festive colour scheme continues inside. The heater control area and passenger airbag panel are both painted green, the latter topped with a large red ACL2 sticker. A pair of Recaro bucket seats have been trimmed with green leather centres then embroidered with a matching AC Schnitzer logo and red ACL2 script.

There’s also a set of brushed-metal pedals, and a black anodised gearknob and handbrake lever straight from AC Schnitzer’s accessories range, but one of the most obvious interior changes is the reprofiled steering wheel rim. I can’t say I’m a fan of the way it looks – it’s like something Sigourney Weaver chopped off an alien – but it fits my hands perfectly when you hold it at the quarter to and quarter past positions. Sadly it isn’t as comfortable when you grab it elsewhere, which you do need to do on a regular basis – more on which later.

The manual gearlever is less contentious. The AC Schnitzer stick is a little taller than those in the M2 and lesser 2 Series models, and that makes the throw just slightly longer, but the shift action is more defined and less rubbery. Despite not having a DCT ‘box, roll-cage or rough composite door cards, the ACL2 feels very much like a junior M4 GTS. The seats and seating position are remarkably similar to those in that car, as is the way the chassis manages to transmit terabytes of useful information through the seat.

Sadly, the ACL2 doesn’t emit the same race-car-style straight-six thunder that characterises the GTS, yet the exhaust fitted does add some volume and drama, especially when the engine reaches the top of its rev range. What the engine lacks in aural delight it more than makes up for in muscle; you can feel every one of its 562bhp. When traction is good the ACL2 instantly reacts to every minute movement of the throttle pedal, the engine promptly metering out the requested degree of thrust. When traction is limited, this linear power delivery ensures you have complete control of the rear tyres via measured use of the accelerator.

The weight saving of the manual ‘box is a good reason to shun the DCT, but the performance these saved kilos might liberate isn’t as intriguing as the influence the gearbox has on the whole car, and it adds to the car’s relative obedience. One of the most frustrating thing about the M3 and M4, GTS included, is the abrupt fashion with which their DCT ‘boxes make full-throttle upshifts. Even after you’ve dialled down the aggression of the gearchange, the DCT still bangs home the next gear with such unnecessary force that the rear tyres can’t always cope with the spike of torque and traction is quickly broken – why BMW’s engineers allowed this past them when in development and testing I’ll never know. It makes you wary of changing gear, worried that it might not be the opportune moment and that you may have to deal with a large amount of unwanted oversteer. With a clutch you can control, the ACL2 is far more manageable than even the M4 GTS, despite having an extra 104lb-ft more torque.

The ACL2 isn’t equipped with the same super-sticky Michelin Pilot Sport Cup 2 tyres that the M4 GTS uses. Instead it wears 285/25 R20 Michelin Super Sports, a tyre better suited to the cold, wet north German weather during our test. With equally wide tyres on the front as on the back, the ACL2 doesn’t want for any more front-end grip and it changes direction with the same ferocious immediacy that it accelerates. It’s extremely sensitive to every input: turn too keenly or accelerate with little sympathy for the rear tyres and the back end will lose grip instantly. This appetite for sliding means you find yourself needing to apply opposite lock more often, and in greater amounts, than you’d ordinarily think acceptable. And in doing so, you move your hands to parts of the steering wheel seemingly not designed for a human’s grasp. This always-on-the-edge-of-sliding balance makes the ACL2 an incredibly agile car, but also one that demands serious attention, sensitivity and respect. When driven like this, it feels almost 911 GT3 RS-like, it is that good.

The ACL2 equips you with everything you need for this level of performance. The short wheelbase, which could make things unmanageable, is countered by how accurate you can be with the throttle. The Drexler limited-slip diff also locks the rear wheels in a more gradual and natural way than the Active M Differential, allowing you to confidently use the throttle to help steer the car.

The engine, gearbox and diff make the huge power more approachable, and the communicative chassis helps you anticipate the ACL2’s reactions. If someone jumped out of the said 911 GT3 RS and into the ACL2 they’d feel at home straight away with how the car handles. But despite the control you have, the car can still be overwhelmed by its vast power, like any mega-powerful sportscar. That makes it a real challenge to try taming, but don’t view this as a negative, they make the process of learning the ACL2 a pleasure. 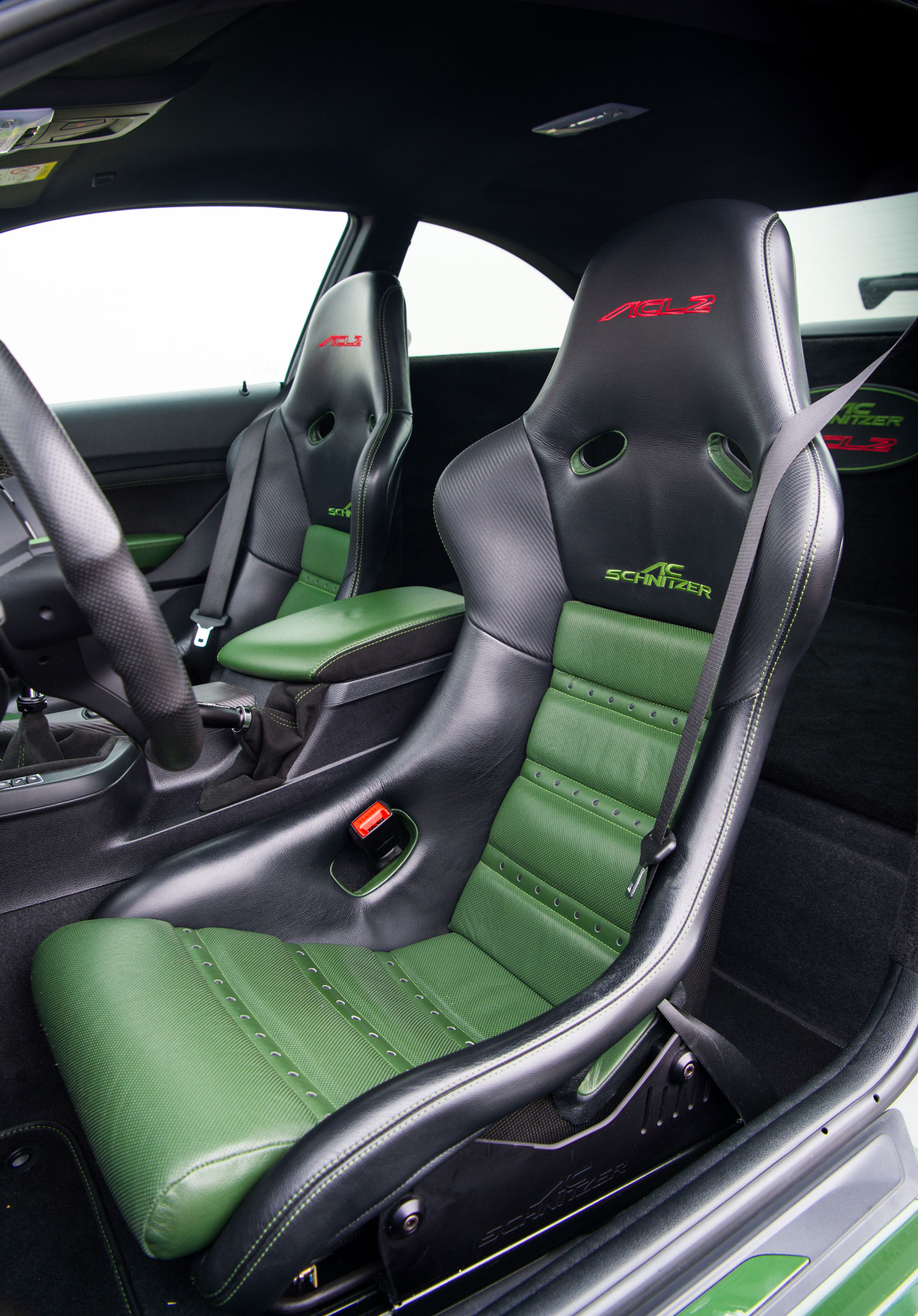 The ACL2 is a one-off concept car and isn’t for sale (not quite true – Ed*), so there is no actual price. However, AC Schnitzer has given it an estimated value of 149,000. Its ferocious performance, aggressive attitude and fictitious price put it squarely in the sights of other hardcore, track-focused cars like the Porsche 911 GT3 RS, the Mercedes-AMG GT R and yes, BMW’s M4 GTS.

If you’re desperate to get your hands on an ACL2, AC Schnitzer has a solution: the ACL2S tuning package for the BMW M235i/M240i. The Aachen based tuners won’t transplant the M4’s twin-turbo engine into the car, but the kit does include a healthy power upgrade from 335bhp to 394bhp. Torque is up by 74lb-ft to 442lb-ft.

The whole package costs 35,900 (approximately 30K) and can be added to either the M235i or M240i coupe or convertible. It includes a set of wheels and wheel arches to make the M235i/M240i look similar to the ACL2. The wild splitter, rear wing and gurney flap from the ACL2 are also available, but they will cost extra. So too will raising the M235i/M240i’s top speed to 174mph and swapping the speedometer for one that goes up to 300kph, or 186mph.

The fully adjustable suspension from the ACL2 is also included, however if you really want to replicate the one-off car’s handling you’ll really need the optional LSD which adds another 2,590 to the bill…

AC Schnitzer did produce a run of 30 x ACL2s to help celebrate the company’s 30th birthday, but they have all since sold.

*AC Schnitzer sold the ACL2 in late 2017 to the company who imports AC Schnitzer products into Japan, and the car is now doing the rounds at Japanese shows – see this month’s BMW News.