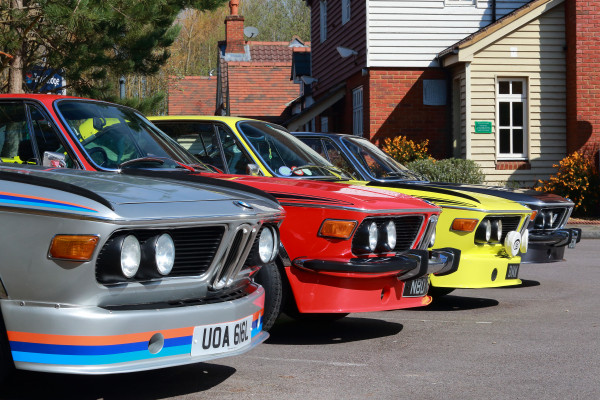 Rewind to the 1960’s, 70’s and 80’s; BMW’s range of automobiles were renowned for their class leading driving dynamics, engineering and design. Their cars also shared a classic “Sharknose” appearance, a design classic that are the building blocks that have made BMW the world class manufacturer it is today.

With the rise of classic car values, enthusiasts are turning to cars that have remained under the radar for a long time. Models that sold in small numbers in the UK such as the BMW E12 and E21 have always been less acknowledged than an E28 M535i or E24 635CSi for example.

The Club is aiming to bring awareness of these rarer and lesser known cars to sit alongside the more popular cars that sold in greater numbers.

Together with the existing club Registers we aim to make it widely known there is a new ‘umbrella’ section within the club which acts as a ‘catch all’ for these models, which will provide support, advice on technical issues, access to spare parts and camaraderie to owners of ALL classic models. So as we ‘sink our teeth’ into 2018, the BMW Car Club GB brings us the brand new, jaw-dropping “Sharknose Collection”!

As a club we exist to provide a broad church to attract fellow owners and like-minded enthusiasts. However, for the smaller car registers it can be difficult to reach out around the country to the owners, indeed many live in splendid isolation! We aim through the Sharknose Register to fire the enthusiasm of these very owners, to share our collective experience and create an attraction for them to join, particularly those who in the past have been serenaded with the many club benefits available, but have no incentive to commit.

The idea is in no way to water down or undermine  individual model Registers, their identity is cast in concrete; but we do want to strengthen them by creating a large ‘funnel’ for people to enter and increase awareness through collective show boating. Our aim is to increase awareness by ‘attraction’ – we will do this collectively under a new, colourful and slightly tongue in cheek appearance – and it is something we can do more effectively together.

We have created a new Sharknose logo that uses the bold club colours, an abstract design which is distinctive, yet simple in its form. To be a part of this pod, to share knowledge and ideas with fellow members, you and your cars are invited to Sharknose events around the country where you can enjoy and be part of a fabulous collection of cars, including the E3, E6, E9 E10, E12, E21, E23, E24 and E28.

Watch out for 2018! The 8th April will see the launch of the Sharknose Collection at The Southern Concours, where we also expect to introduce a  razor sharp, colourful “Sharknose” range of products to celebrate the new Section. See them surface again at local and national BMW shows and events throughout the year including Duxford Spring Car Show, Silverstone Classic and the BMW Car Club National Festival. This is something we ALL can sink our teeth into.