Spotlight- 60 years not out! 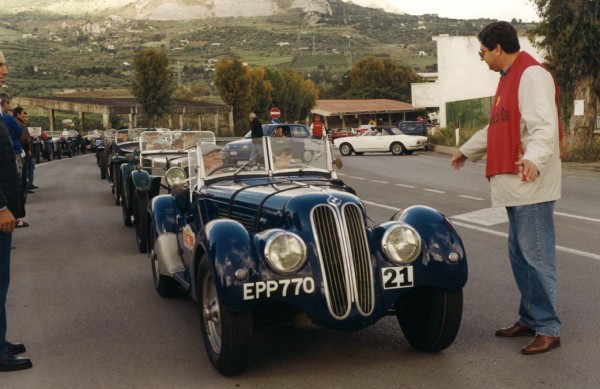 Spotlight – 60 years Not Out! – Ken MacMaster

By Richard Baxter with Extracts from John Muschamp

It bodes well to note that an individuals life in the Club is non stereo typical and in itself becomes a unique journey. The spot light on our longest serving member Ken MacMaster, 60 years this month! is testament to ‘think not what can the Club do for you’? but ‘what can I do for the Club’ and yet, still achieve one’s ambition.

Ken has that legendary quality of applying great attention to detail and it came as no surprise that he recalled joining the Club either in July or August 1957, 60 years ago this month! as recorded in issue 30 of the BMW Car Club pre magazine known as ‘The BMW Car Club Bulletin’.

Throughout this 60 year period there have been two faithful companions; wife and chief navigator Diana and one special car – the blue 1938 Fraser Nash BMW 328 – EPP 770 – chassis 85260

The 328 has been his motoring passion and a very reliable means of transport, always carrying out roadside repairs himself  – sometimes with a bit of help from Diana or other Club members and only once in 60 years has it been rescued by recovery truck.

17 year old Ken recalled visiting a Major Hall, (motor dealer in Balham), with his father. “He had 2no 328’s” commented Ken, but refused to sell him one that particularly caught his eye, on the basis that “at his age he would probably end up killing himself”!

Undeterred, and after searching several months for the right car, the 18 year old Ken paid the princely sum of 450, but the 328 was not his first BMW. It replaced an earlier 1935 Fraser Nash BMW 319 ‘Special’ which he sold shortly after he acquired the 328.

There is clearly a deep family respect for the engineering integrity of the BMW since his father owned a Fraser Nash BMW 326 saloon in the late 1940’s and a Bristol 401, the successor to the type 400 which had been based on the BMW 327/328.

The 328 became Ken’s regular transport for business and social use, after a couple of years he needed something more suitable for business and purchased an AC Aceca powered by the Bristol engine of the 328 design in which he covered 160k Kms without any major problem before eventually replacing this with an 3.8 fixed head Etype.

With the advent of the neue klasse, a BMW 1800Ti replaced the E type, which in turn was replaced by a BMW 2002, BMW325i Sport and 316Si Compact and currently a 125d is providing everyday transport.

During the 1960’s, Ken became involved in the sport of autocross (racing on grass) and he qualified for the final of the Players No 6 National Autocross Championship in 1968, at the wheel of a highly modified Hillman Imp.

From there, he progressed onto sprints and hillclimbs. He purchased his first single-seater racing car (a Ginetta G17B) in 1972 and then contested the RAC Hillclimb Championship between 1973 and 1978, driving a GRD 272-Hart BDA (1973-74) and a Modus M4-Hart 420R (1975-78). He proved competitive, gaining four outright wins and breaking the class record at eight of the Championship hillclimb courses.

He regards one of the best performances of his career as finishing second to Roy Lane’s Formula 5000 McRae at the RAC Championship qualifying round, held at Harewood in July 1976. Ken retired from top-line hillclimbing at the end of the 1978 season.

Meanwhile alongside autocross and hill climbing, the 328 was entered (during the 1960’s) in autotests and autocross gaining several class wins against more modern machinery. It was particularly effective in the wet.

After his retirement from hillclimbing, Ken decided to concentrate on refurbishing the 328 with particular emphasis on achieving long-term reliability. The car was subsequently used for touring and social rallies but eventually the the competition bug bit again, the first major event being the 1989 Merlin Manx Classic meeting held in the Isle of Man, incorporating part of the legendary TT motorcycle course, and won his class in the pursuit sprint.

Ken and Diana, have taken part in many long-distance rallies from 1991 and still do to the present day, the car being driven to and from each event with both the BMW Historic Section and Frazer Nash Car Club, at different times to Rouen, Normandy, Northern Ireland, Southern Ireland, Marano in the Dolomites, Epernay and Sicily.

The Sicily Rally event in 2001 was quite special in that Tony Brooks (the only racing driver that Stirling Moss felt was his equal) with his wife, also attended. Ken offered Tony the opportunity to drive the 328 from the vineyard in the centre of the island back to the hotel. Tony refused the car but their wifes swapped, and Diane experienced first hand being a passenger to an ex Grand Prix race driver!

This years rally will be to Northern Spain in September, Ken and Diane will embark on a ferry from Portsmouth to Bilbao to enjoy the fast, quiet and smooth roads to be found in that area.

Participation in a demonstration event at Angouleme in France in 2002 (where he finished fifth) persuaded Ken to obtain his racing license in 2003 at the tender age of 65.

He was immediately competitive, gaining a first class award on his debut outing in a Vintage Sports Car Club High Speed Trial at Silverstone. Later that season he finished third in a scratch race at Mallory Park.

An entry was secured for David Franklin to drive the car in the pre-1953 sports car race at the 2004 GP Historique at Monaco, finishing 9th. Later in the season David and Ken shared the car at the pre-war sports car race at Spa finishing third in the 2 litre class and fifth overall.

A return to Monaco in 2006 resulted in an improvement to fourth place and set the second fastest lap in the process. And once again in 2008 with a further fourth place finish. Just seven days later they attended the Historic Club rally to Munich, the car running faultlessly throughout the 3,400 kms round trip.

To summarise a life times competitive events, Ken has competed in more than 200 events in the 328 both in the UK and throughout Europe.

What Has Been Said by Friends and Associates

“always drives the car to and from the event”.

“before the start, Ken would always take a final walk around the car” (not as a superstition) but to check the tyres.

Due to major heart surgery Ken had to relinquish his competition license – “hugely admired his acceptance and dignity in giving up something he held very dear to his heart”.

“a man of great character and enthusiasm”

” his car was always meticulously prepared”

“we found it amusing in the workshop because whatever we did, Ken would arrive and without fail check the tyre pressures “

“his particular style of driving is smooth and unflustered”

“his attention to detail has become legendary”

Ken has held many positions of responsibility in both the BMW Car Club and the BMW Historic Motor Club Uk.

Has served as treasurer and company secretary to the BMW Historic Club UK.

Ken has always shown great generosity towards the Club, and whenever asked if he could attend an event to display the car such as, the ‘Hotspots’ competition at Gaydon in 2015 and the classic car show at the NEC, one can always rely on Ken to do his utmost to give his support. 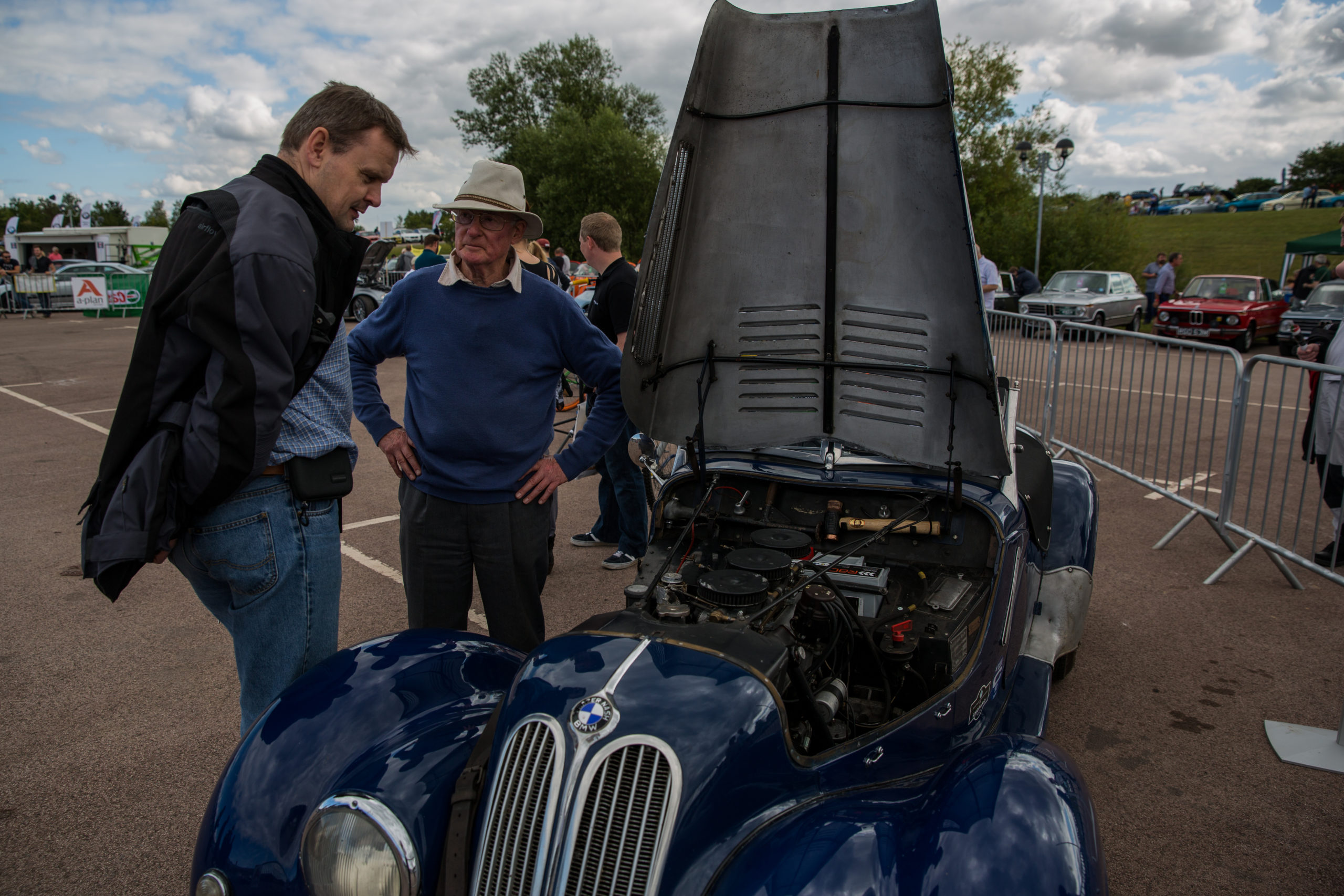 For such a long and distinguished involvement with BMW, it was fittingly acknowledged and was proudly presented with the Prof. Dr. Gerhard Knochlein – BMW Group Classic Award in 2009 for outstanding contributions to maintenance of the BMW tradition.

The more things change the longer they stay the same, and as Ken commented “the Club has changed in all recognition since he joined, at that time all the cars in the Club were pre war, the game changer came with the advent of the Neue Klasse cars in the 1960’s” and very soon we had a large membership of owners new to, but enjoying the brand of the ‘Ultimate Driving Machine’.

We salute you Ken, and wish you and Di many more enjoyable rallies with faithful companion EPP 770!