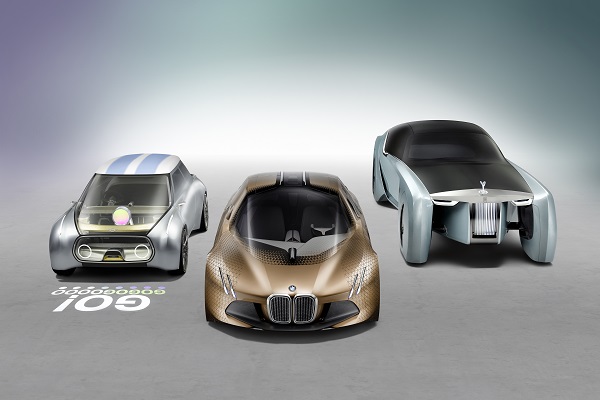 So far, BMW had only celebrated its 100th Birthday in the metal with the BMW 7 series  ‘NEXT 100 YEARS’, which was really just a special edition of the standard car.

Now however, BMW has unveiled three new concept cars, one for each of its main marques.

Aiming to show what ‘pure driving pleasure’ could look like in the future, the BMW concept restates the BMW marque’s purpose as a driver focused sports brand.

The car will feature autonomous driving capabilities, but will still be able to be driven by the owner when they desire. A key requirement if BMW wants to keep its moniker as a maker of ‘ultimate driving machines’ going forward.

The BMW concept also suggests what sort of materials could be used in the future, with BMW predicting the end of the use of steel pressings. Instead, BMWs could be using carbon fibre in greater quantities, as well as 4D printed materials, providing for a lighter and stronger vehicle.

So too, these materials can make new features possible, such as the dynamic panels around the front wheelarches, which change shape slightly as the car indicates at junctions.

THE MINI VISION NEXT 100

The Mini concept affirms the Mini brand’s core values of individuality and fun. With a body and interior that is customisable by its owner, the Mini concept would never pass an identical car, were it ever to go into production.

As with the BMW concept, driverless autonomy is also a feature, but again, the driver can take control as much as possible, to enjoy the Mini’s trademark joyful handling.

Quite how this will reconcile with the driver’s ability to take control themselves, isn’t clear.

Inside, the customisation continues with the ‘cooperizer’ – the reinterpretation of the iconic central dial into a personalised interface between the driver and the car’s artificial intelligence. This is the large disc just behind the windscreen as visible in the photos.

Furthermore, the interior features eco-friendly materials not normally seen in car interiors, such as brass, basalt and cellulose.

THE ROLLS-ROYCE VISION NEXT 100

Unlike the other two concepts, the Rolls-Royce concept does away with a human driver, with no driver interfaces inside the car. The Roll-Royce is a view of the future of luxury, where occupants are exclusively driven.

Inside the passenger space, drivers interface only with ‘Eleanor’, the car’s artificial intelligence – and driver. Named after the original model of the Spirit of Ecstasy, Eleanor Thornton, the AI will become an in-car assistant to the owner.

Via the AI, the Rolls-Royce concept will remember favourite restaurants and frequent haunts, allowing for a chauffeur-like experience.

Outside, the Rolls supposedly projects ‘grace and prestige’. Many have likened it to a Hammerhead Shark, however.