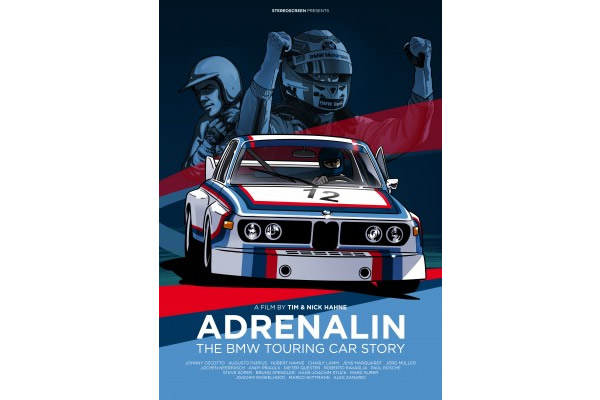 A one-off documentary on the 50-year history of BMW Motorsport in touring car racing is available now: “ADRENALIN -THE BMW TOURING CAR STORY”, produced by brothers Tim and Nick Hahne. Together with their crew, the two filmmakers spent an entire year travelling throughout Europe, during which time they conducted about 30 interviews with BMW Motorsport drivers and management past and present. They also dug out previously unreleased archive material.

Because of this they were able to produce a 123-minute, in-depth, breath-taking and emotional sport documentary, which offers a fascinating insight into life at the limit and features entertaining stories from the pit lane. It can be ordered online now on DVD and Blu-ray at www.adrenalin-film.de.

“This is the ultimate documentation on the history of BMW in touring car racing,” said BMW Motorsport Director Jens Marquardt. “The film had me captivated right from the first minute. The clips show emphatically what a magnificent history BMW has enjoyed on the touring car scene. I find the footage from the 1960s and 1970s particularly fascinating, when the drivers courageously hurled their cars round the racetracks, sometimes drifting wildly. Many of these drivers are heroes, whose success has made them legends. When Johnny Cecotto, Roberto Ravaglia and ‘Strietzel’ Stuck wax lyrical about the good old days and tell their stories from the paddock, I cannot help but chuckle. And I get goosebumps when Bruno Spengler lifts the glass trophy in the air as the DTM champion. Those memories are still just as vivid as Marco Wittmann’s title win this year. I can only recommend any BMW fan to watch this film. Never has the history of BMW Motorsport been told with such emotion and evocatively as in this film.”

Tim and Nick Hahne, and their production company STEREOSCREEN, have been a household name for motorsport fans all over the world since their feature-length documentary film “24 hours – ONE TEAM. ONE TARGET”. In 2011, they accompanied BMW Motorsport throughout its preparations for the endurance classic at the Nrburgring and filmed the race in the “Green Hell” at close range.

You can find more information on “ADRENALIN – THE BMW TOURING CAR STORY” at www.adrenalin-film.de.